I finally headed out to check out the new BrewDog Dublin Outpost in the Grand Canal Docks area. I ended up tacking a taxi as there is really no convenient bus route. I used the FreeNow app (formerly called MyTaxi — a much better name) which made the whole thing as easy as using Lyft or Uber. From the door of BrewDog you can look across the Liffey to the 3 Arena — you just can’t get there. Supposedly a foot bridge is planned, which will make it a bit easier to get to BrewDog. 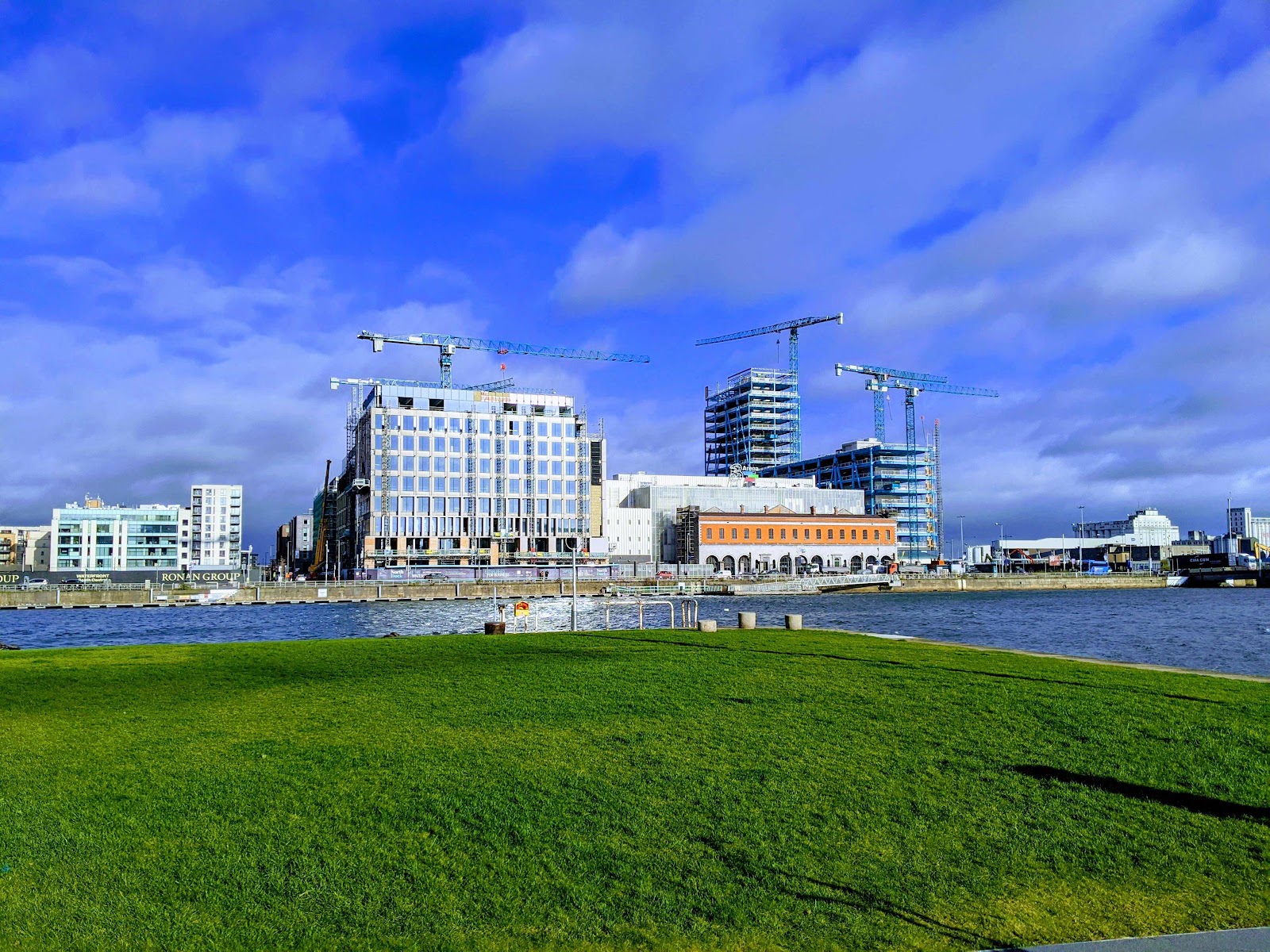 BrewDog has its own building right on the waterfront. They spent a Euro or two on this setup.  The place is huge, with bars on two levels and a large patio for when the weather is nicer. 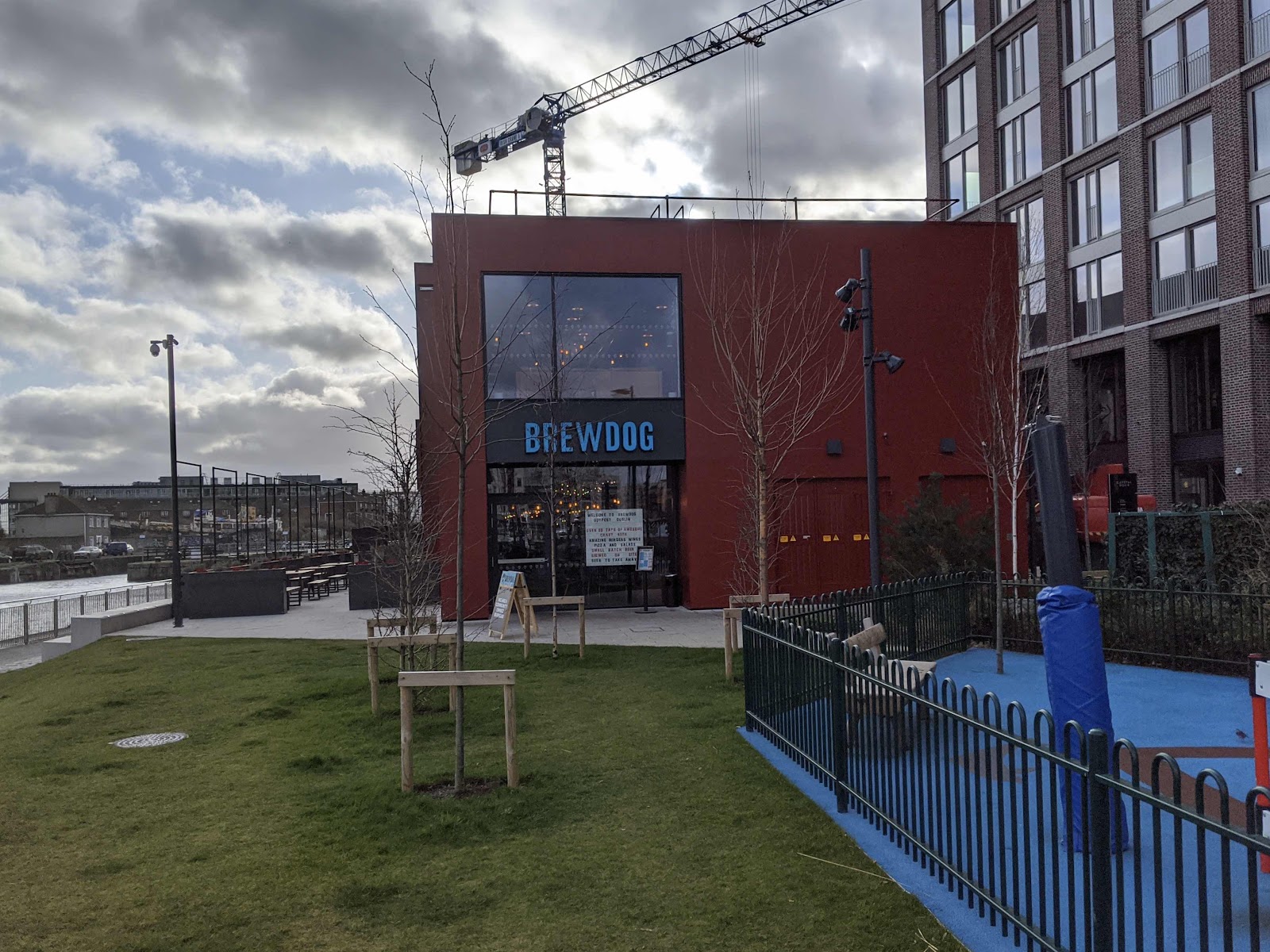 The brewery is operational (first batch in the tanks) but they don’t yet have permission to sell, some confusion on the paperwork.
They had seven guest beers but only two were Irish and one I’d had before (Of Form and Fury) and the other was 10% so ordered a BrewDog beer. 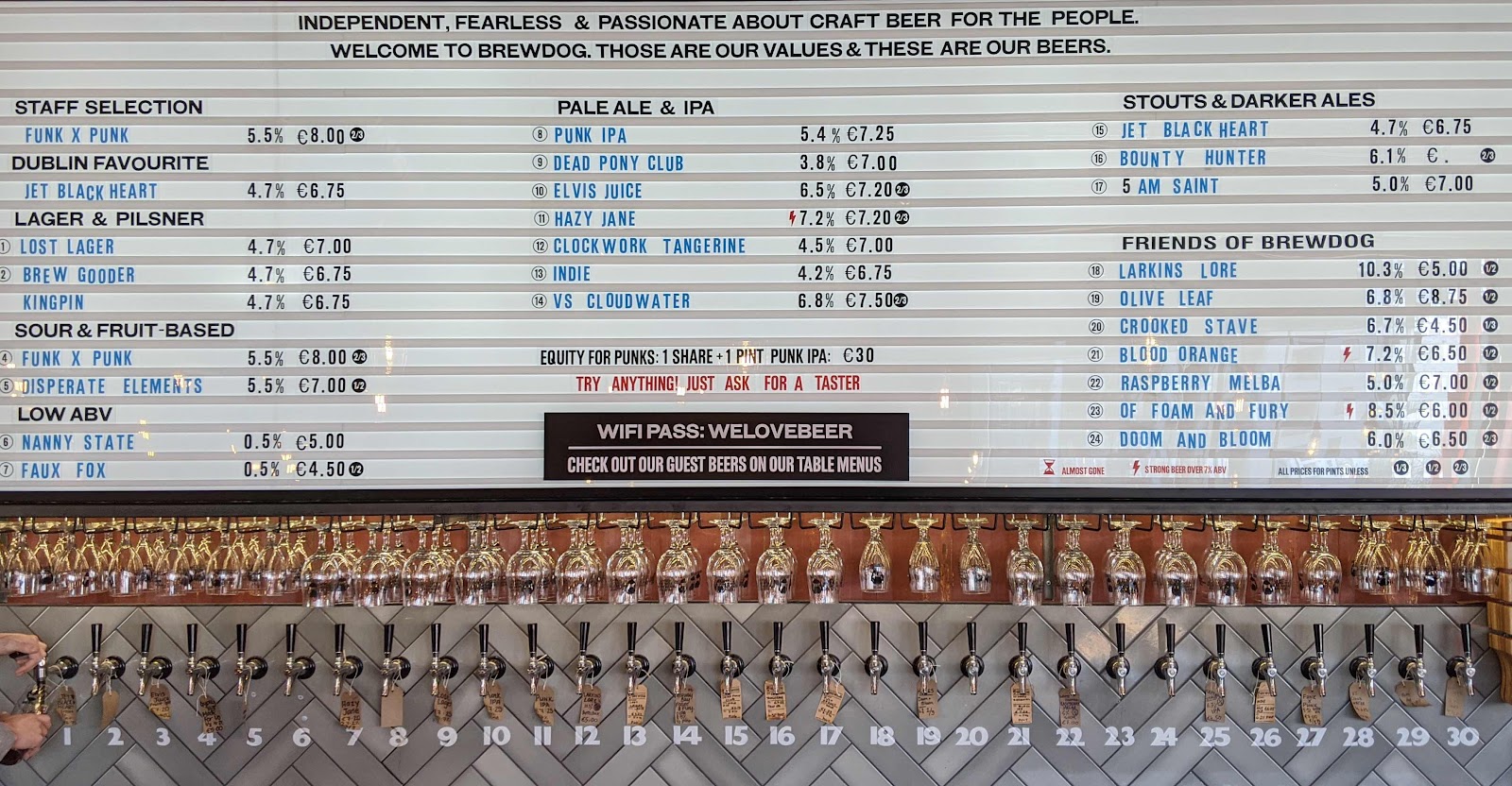 I went with a Jet Black Heart Stout, figuring it was at least an Irish style stout. It was nicely roasty. 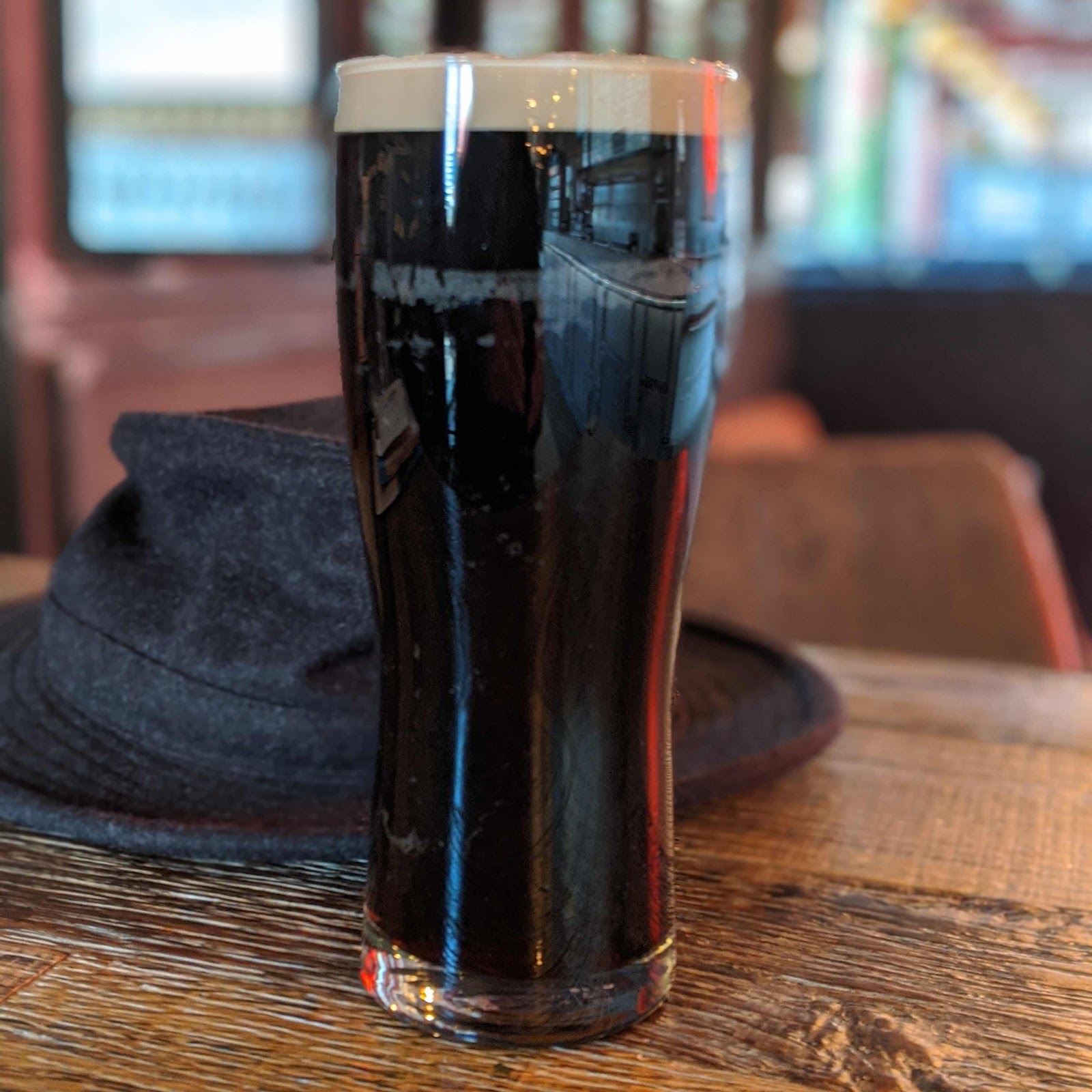 The food going by looked good (and I had many recommendations to try the wings) but nothing was hitting the spot so I ordered another beer, this the Brew Gooder Lager. It was well made but a bit boring. Probably should have expected that, but I wanted to try it. 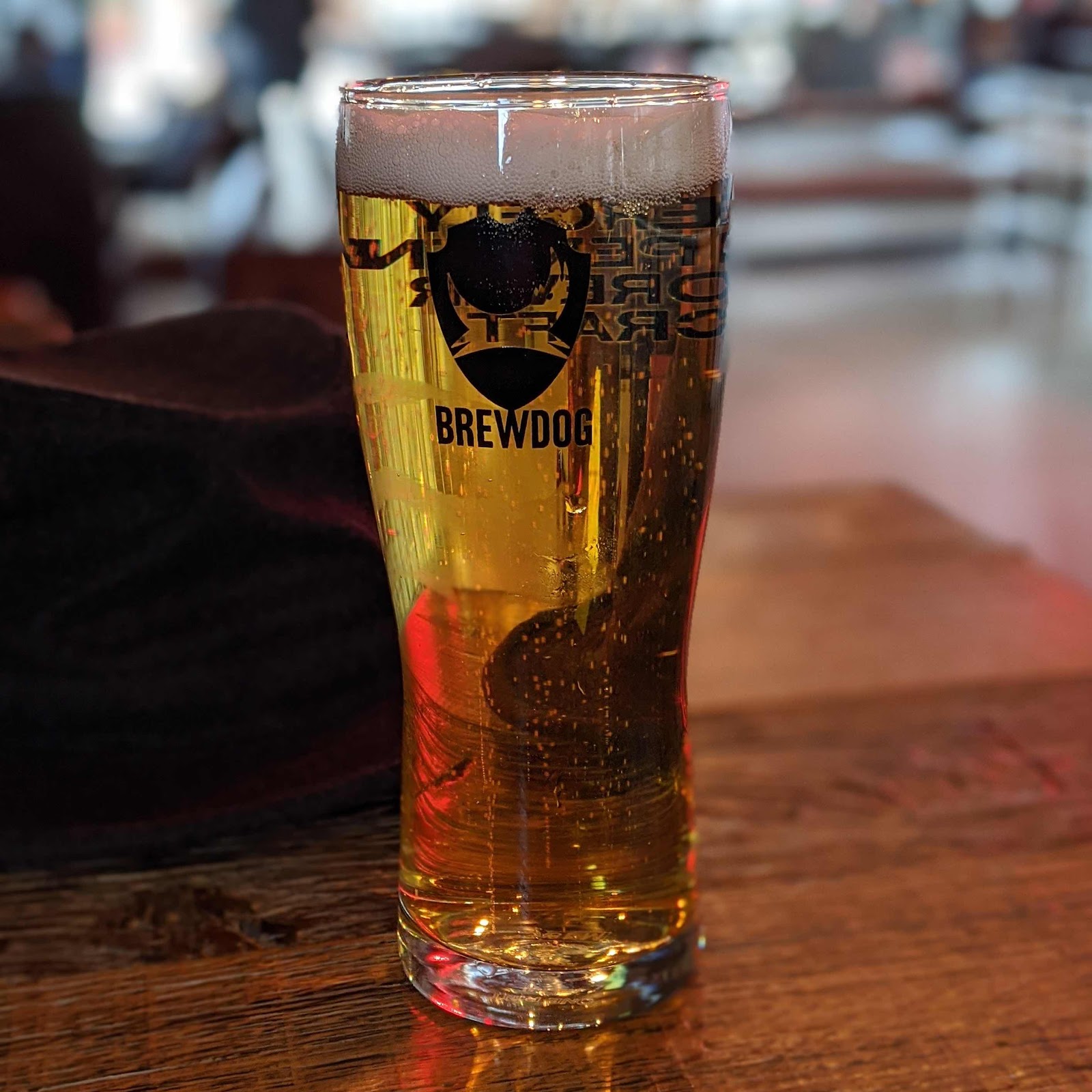 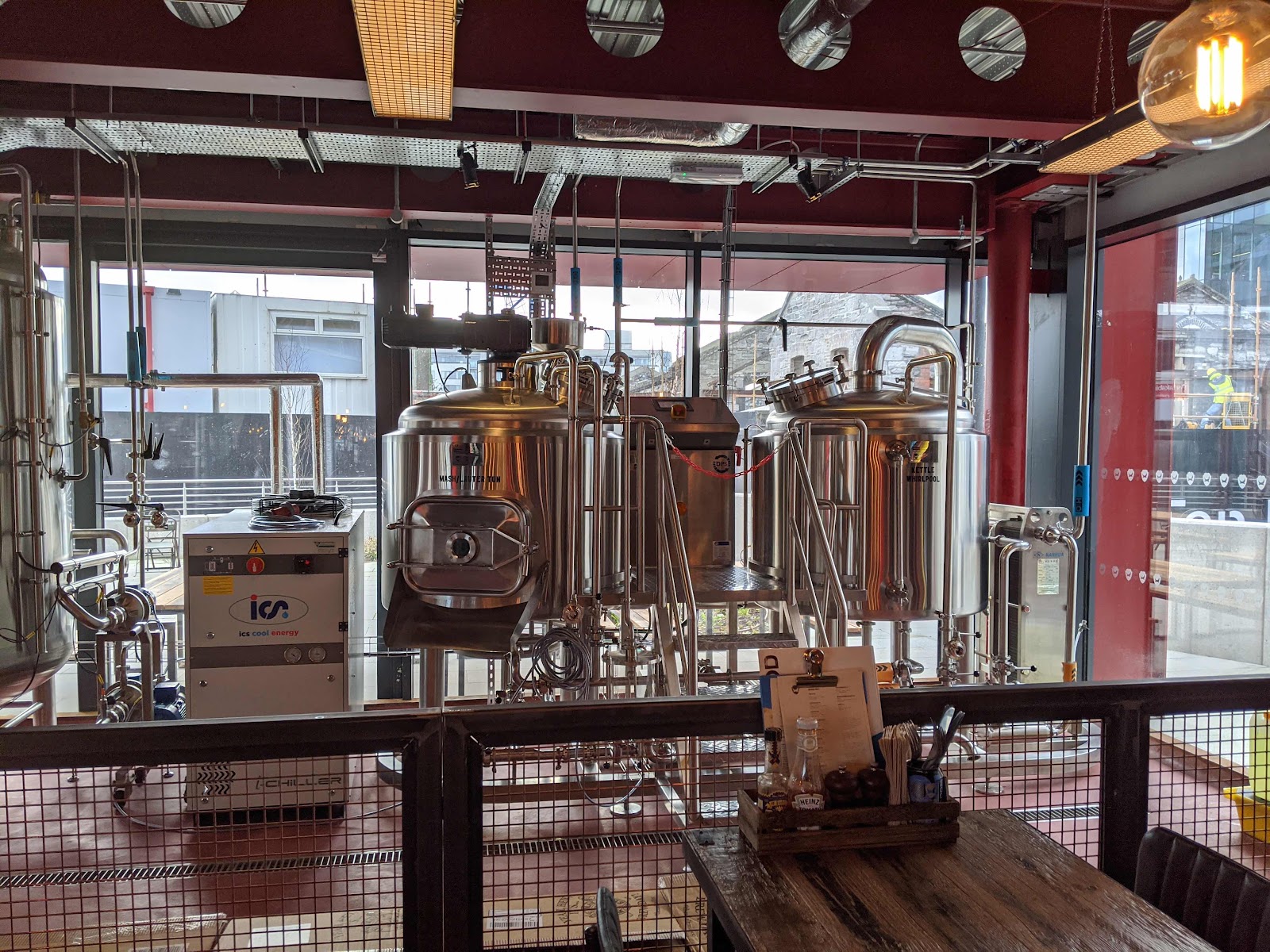 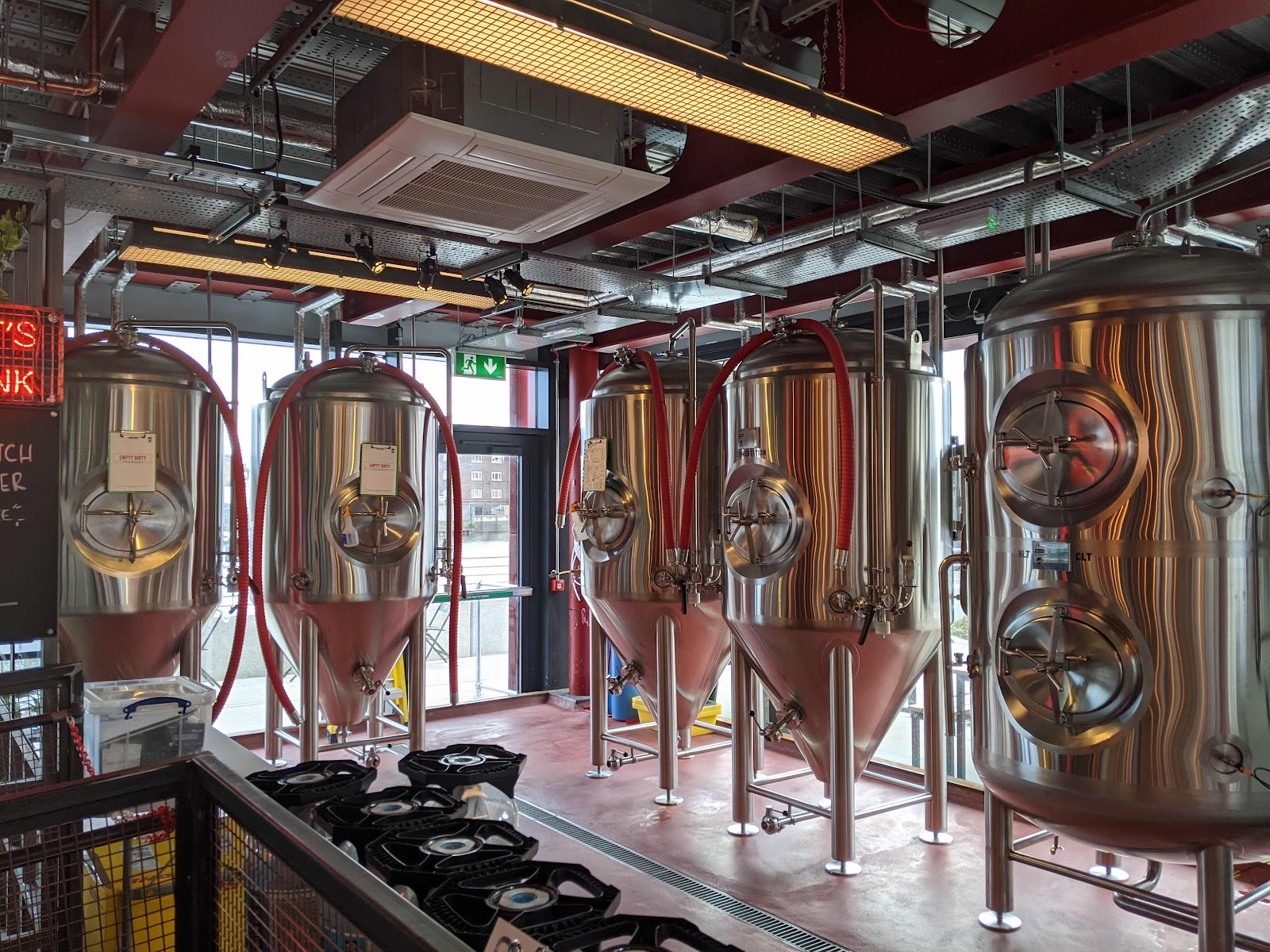 I wanted to make another stop at the Porterhouse so I  fired up the FreeNow app and was soon there. 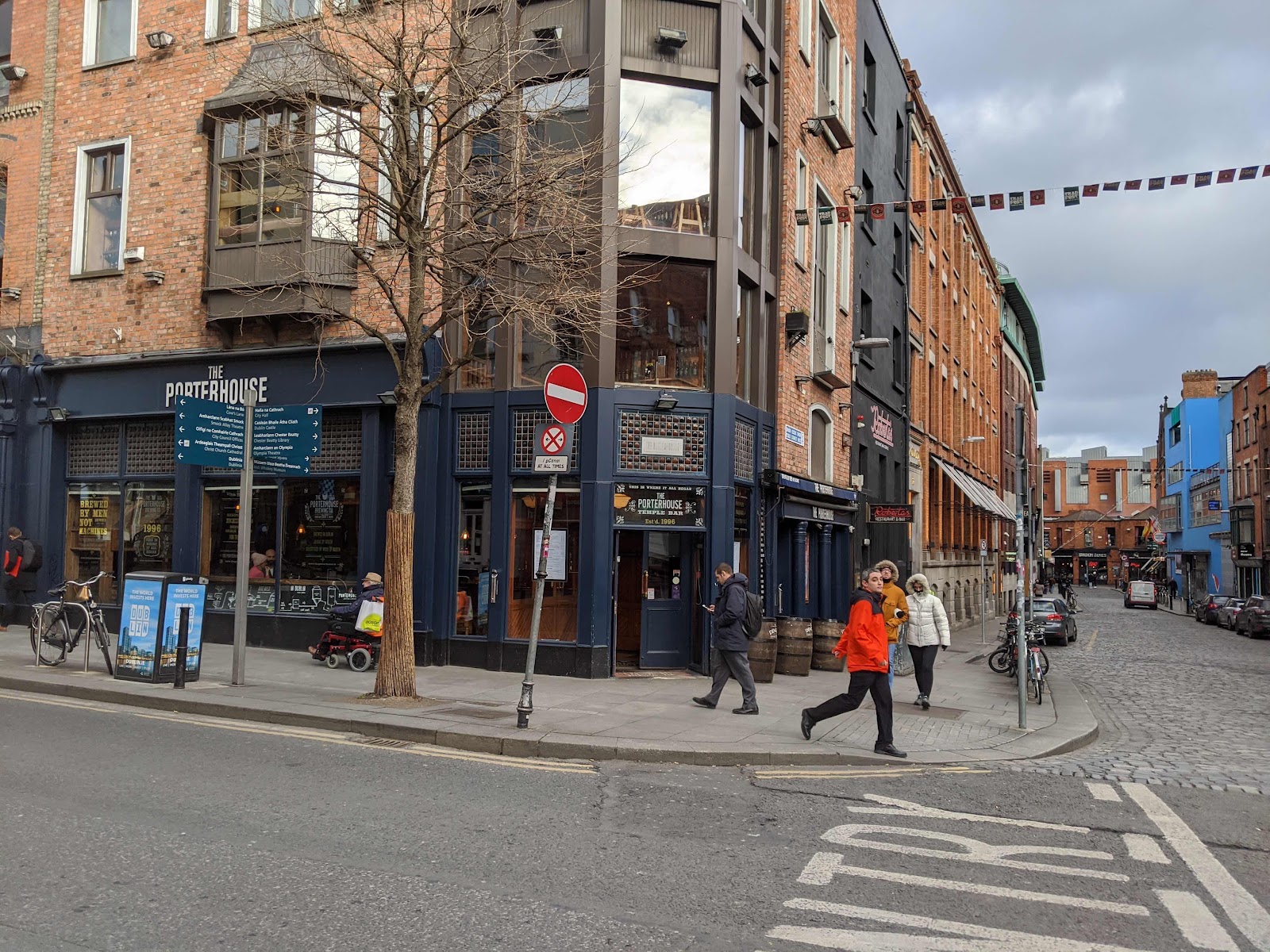 I ordered an Oyster Stout and a plate of oysters to go with it, but was informed they had no oysters today. They suggested the mussels but that just didn’t seem right. 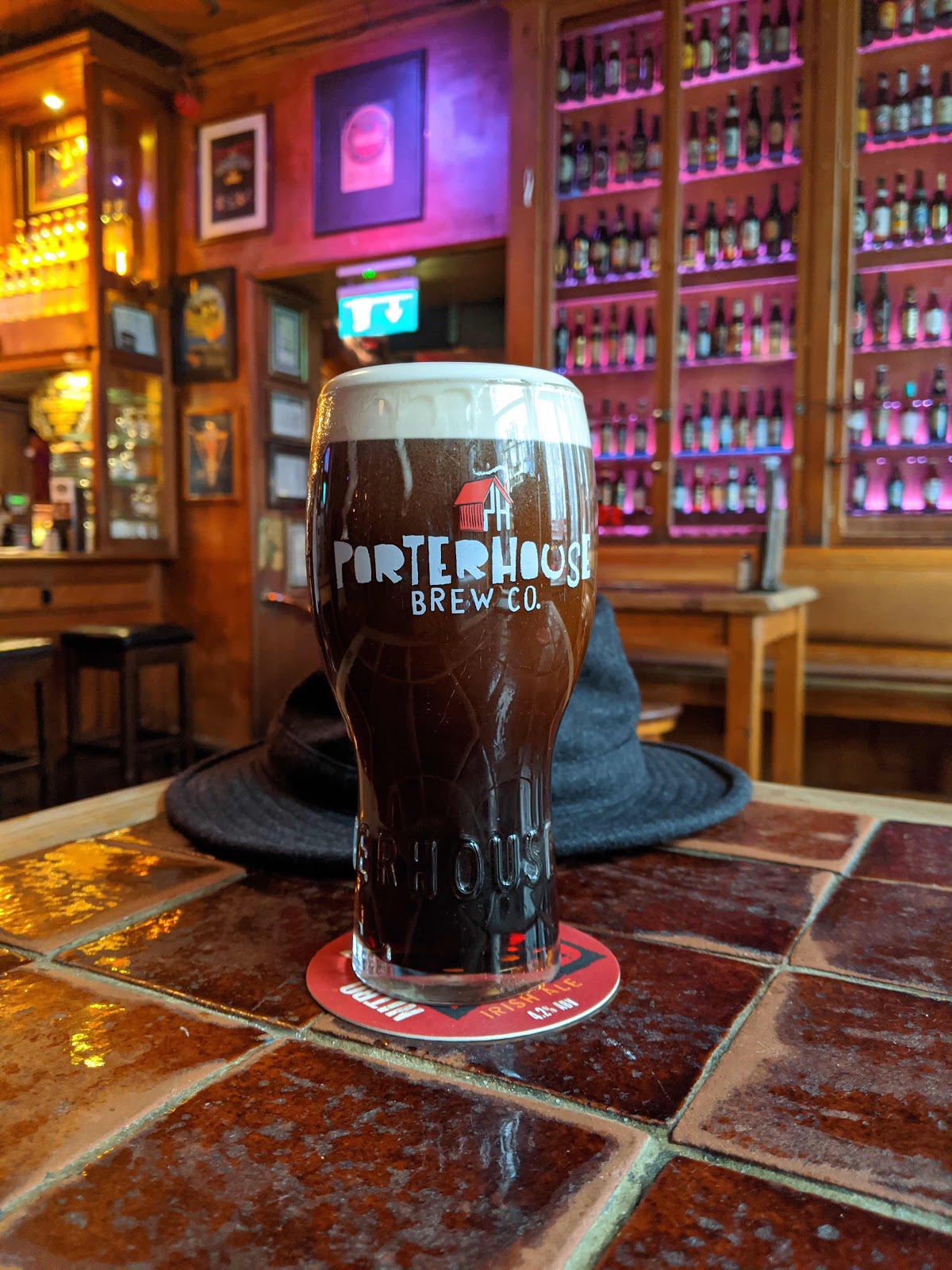 I ordered the Seafood Chowder instead, which had a couple of oysters in it (though cooked). 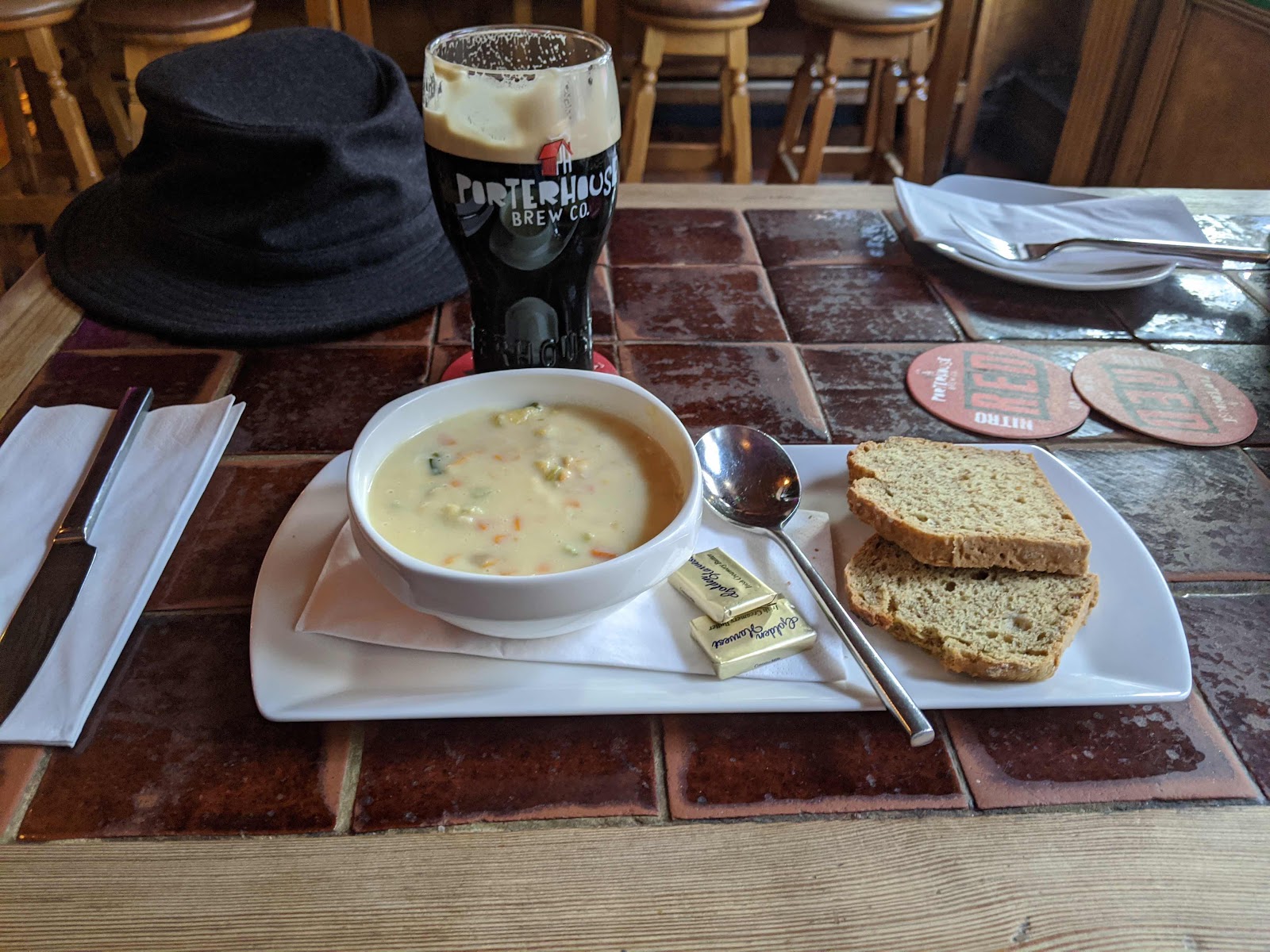 I had another Oyster Stout, but I won’t bore you with the picture. I headed out to my next stop and got a nice picture of the River Liffey 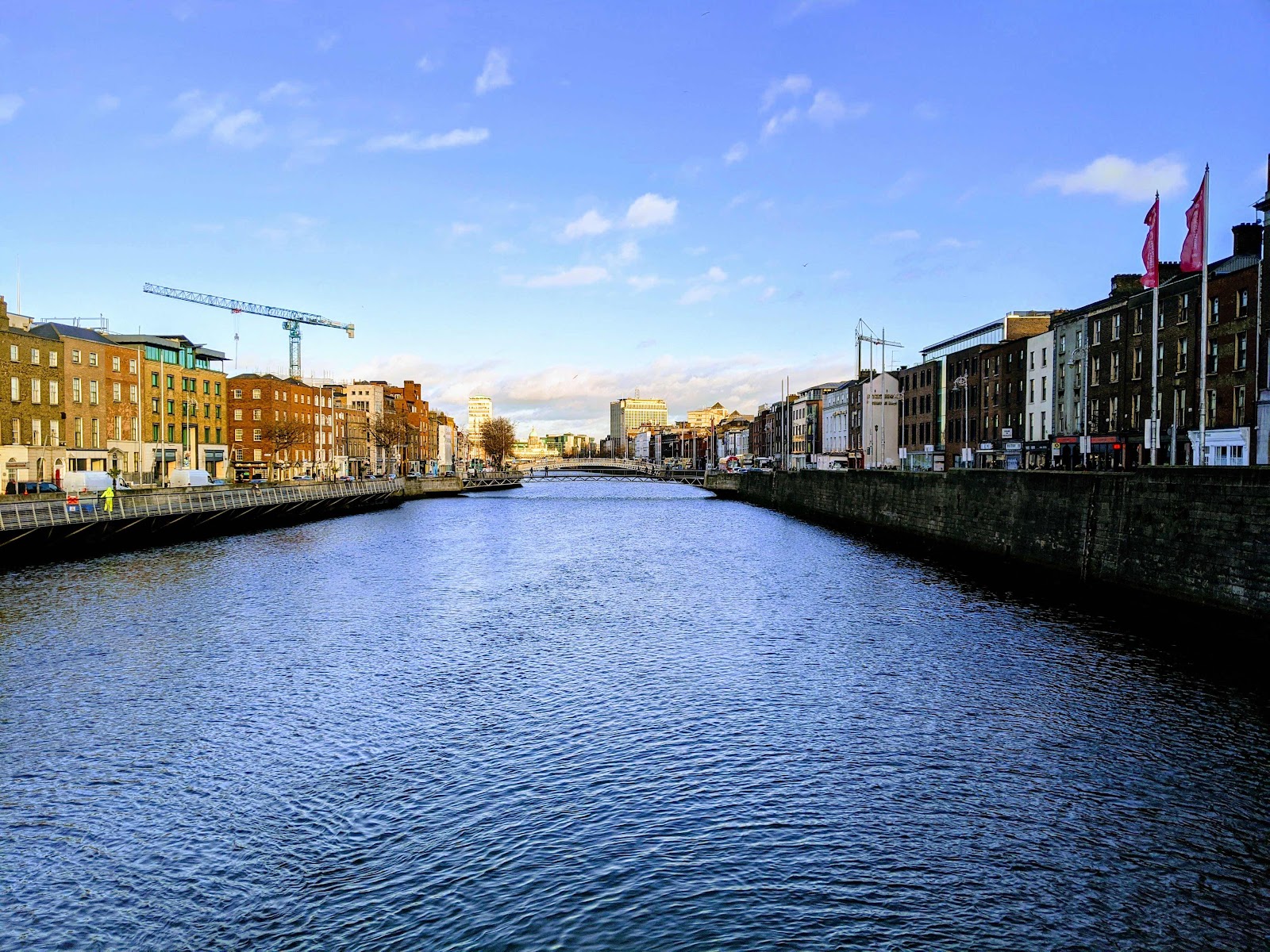 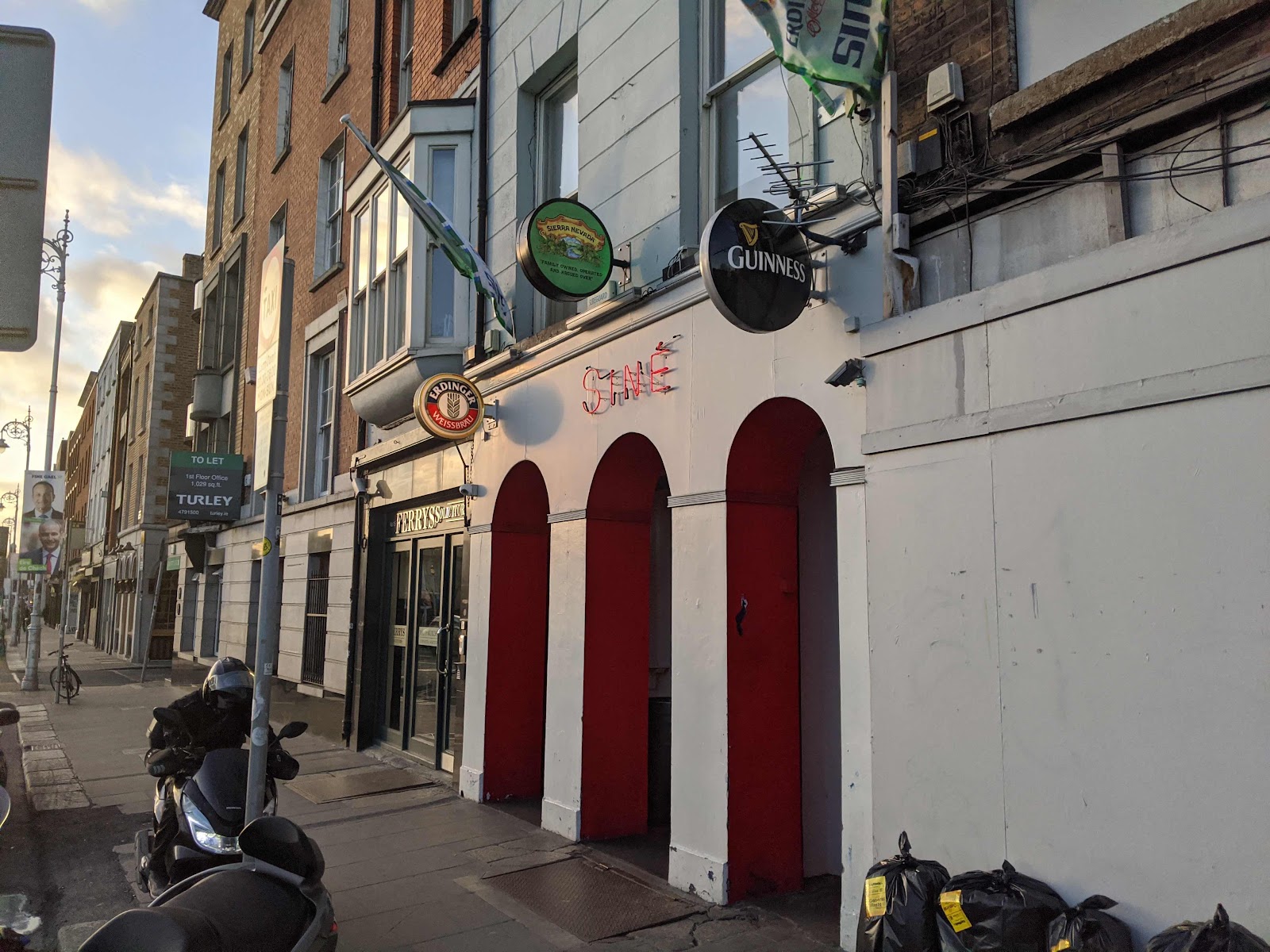 They had a house Pale Ale, brewed by Trouble Brewing, so I ordered that, as it would be rude not to have. A nice beer, well worth the stop. 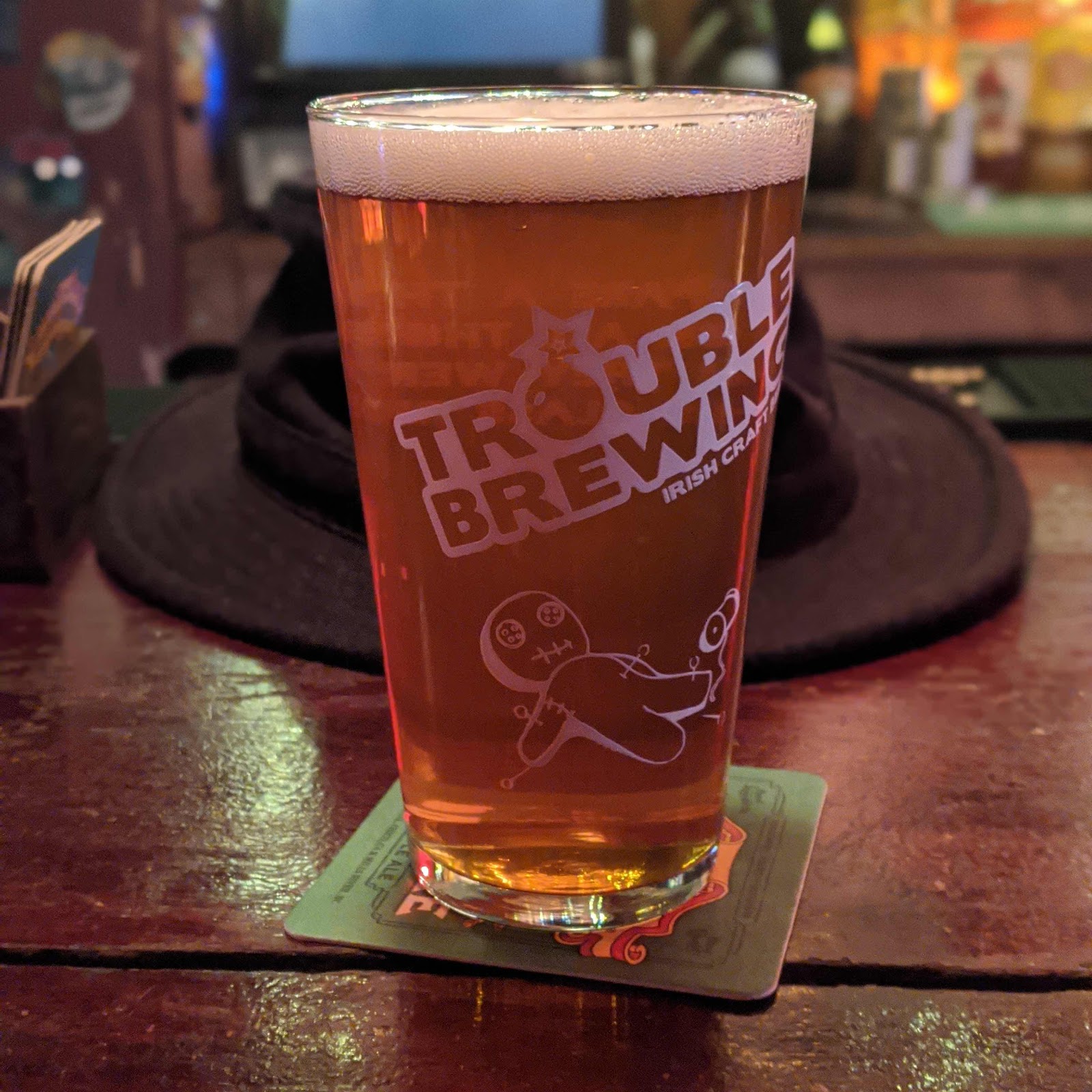 Just about around the corner is The Legal Eagle, my destination. 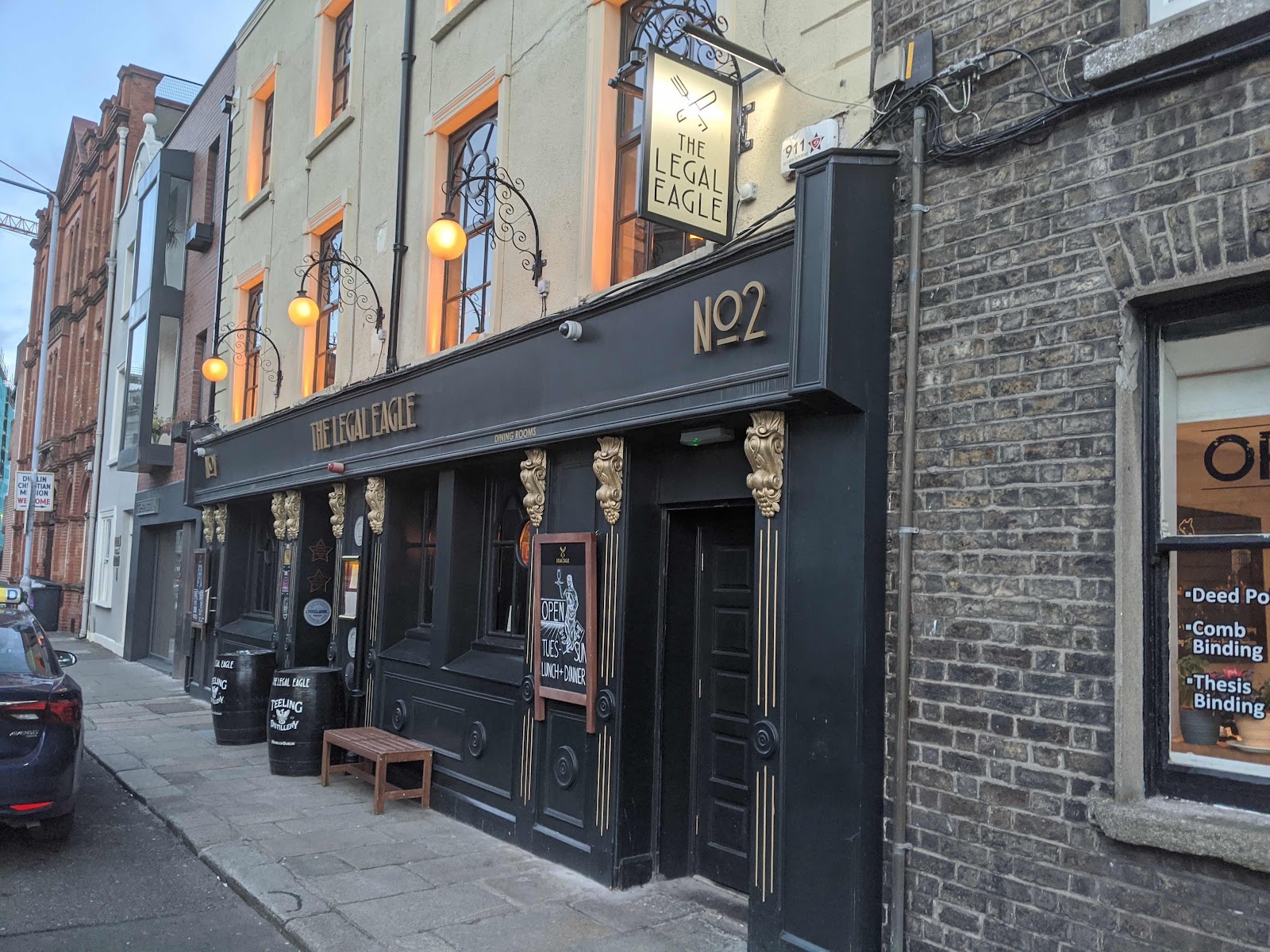 It is primarily a restaurant but there is a bar and you can just go have a beer (or a coffee for that matter). They have upped their tap list since I was there a two years ago. Something for everybody.

I ordered the Whiplash Bowsie Brown Ale. This was one of the beers that was out at the Brickyard the other day, so I was glad to have a change to try it. A nice beer. 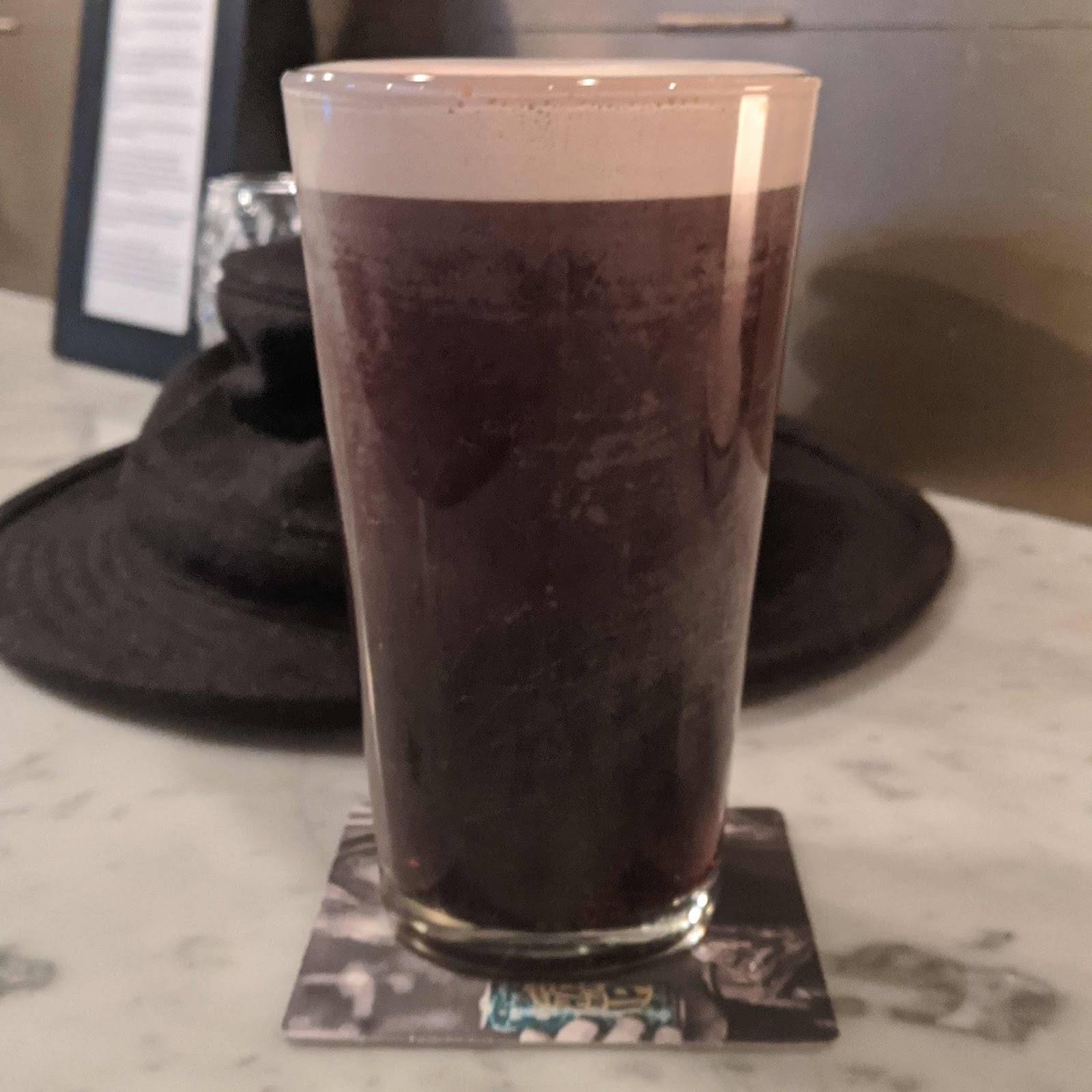 I was still a bit hungry, so I ordered a Scotch Egg and their Ploughmans.  Lots of fruits and vegetables, of which I have not been eating as I should. BTW, that is not my finger, the cheeses were being explained to me as I took the picture. 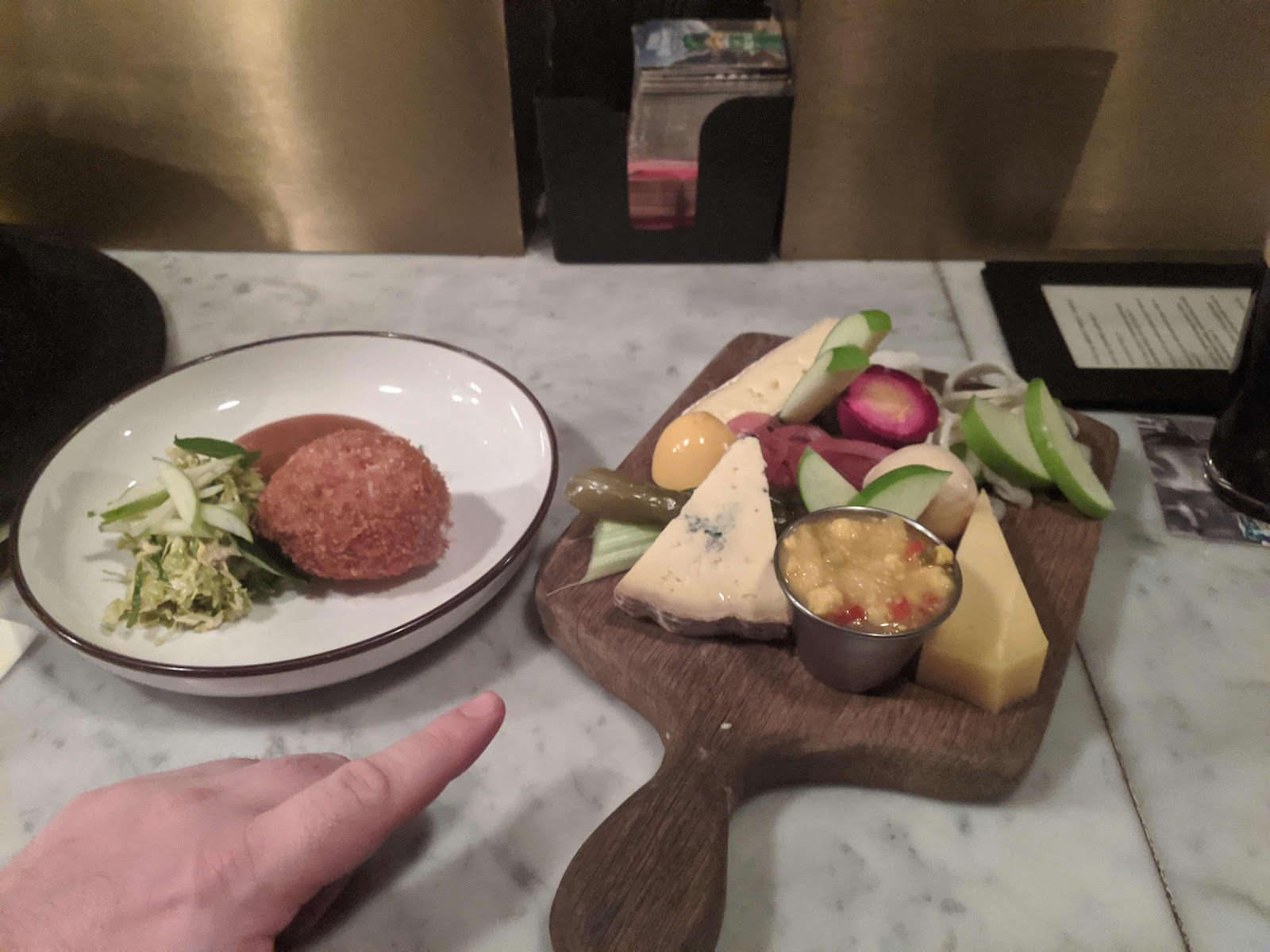 One last beer, probably my last in Dublin this trip. It was a tough decision but I went with the Kinnegar Scraggy Bay IPA over the Trouble Dark Arts Porter as I hadn’t had that one this trip. It didn’t disappoint. It is a little less red in real life. 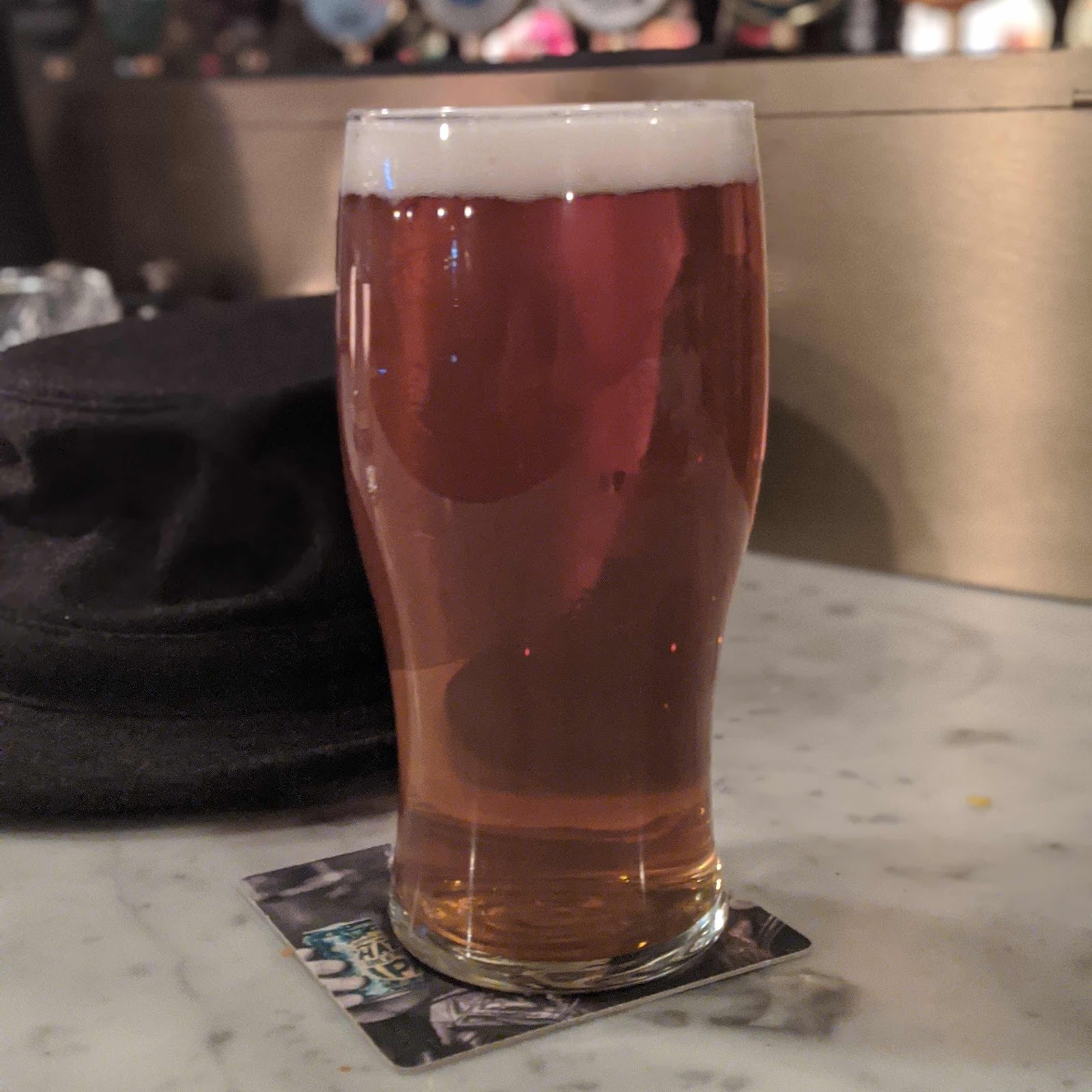 It was then back to my hotel to pack and get ready for my early morning bus to the airport. All in all a successful trip. Didn’t get to all the places I wanted to but visited most of them.

Various religions on the planet have their own practices, celebrations, legacies, and ceremonies. Islam is one of the great regarded religions which offer significance to customs and Visiting Al Aqsa is the wish of numerous individuals after Makkah and Madina. Albeit, the visit of Masjid Al Aqsa isn't compulsory individuals who wish to visit Masjid Al Aqsa can utilize the modest Masjid Al Aqsa tour Packages UK offered by Haramayn Tours. We give modest flight tickets from the UK to allow you to visit Masjid Al Aqsa and play out the customs. At the point when you will choose the Haramayn visits Masjid Al Aqsa visit Packages, then, at that point you will get return tickets, extravagance transportation, and inn convenience and our delegates will be in touch with you to give any sort of help during the Masjid Al Aqsa visit from the UK.