Internet access has been harder to find this trip than I expected. I have now learned that "Wireless Internet" in a hotel description doesn't mean "Free" -- I don't want to pay T-Mobile €/hr to update this!

When I am back home I will upload a day by day description and photos.

The Internet Gods are against me...

We are in Düsseldorf and all is well, but at our hotel the internet service is down! Somebody up there doesn't like me, I guess.

To bring you up to date... Saturday we spent the day in Brussels. First up was A la Becasse, home of the White Lambic and Lambic Doux. These are served in stoneware pitcher, the size depending on how many at the table order each (i.e. its a communal pitcher). Luis had the draft Kriek which had an intense cherry flavor. I like the beers and especially the pub, but I'd like it better without the saccharine aftertaste (I mean this literally -- it is sweetened with saccharine)

Next up was the Delirium Cafe. I have a love/hate feeling about this place. With 2000+ beers on the menu there are beers I've never seen anywhere else. But the places has little or no atmosphere and seems always full of teenagers looking for either the strongest of sweetest beer they can find. And the service can be terrible -- but not always the fault of the server -- it can take many minutes for them to find the beer you want, only to come back and say they couldn't find it. I like to drink beers from Brittany (Bretagne ) there but it can take 20 minutes to find one in stock :(

The last stop was Chez Moeder Lambic in St Giles. This is a my new favorite place to drink in Brussels. A nice selection of draft (including Cantillon on a beer engine) and a fairly extensive (and improving) beer list. A short taxi or tram ride from Brussel Zuid train station (a/k/a Midi) it should be on your list when you visit Brussels.

Sunday we took the train to Düsseldorf and managed to drink quite a few beers at Uerige. After dinner at Füchschen and it night cap at Im Goldener Kessel (Schumacher) it was time to call it a night.

Anyway tomorrow (Tuesday) is Sticke Day and hopefully my internet connection will be back up!
Posted by The Mad Brewer at 5:38 AM No comments:

Still limited internet access :( Will get better on Monday. We had a morning session at Oud Arsenaal, an afternoon session at the Kulminator, a nice dinner at De Grotte Witte Arend and and evening session at the K. Life is good. Off to Brussels for the day to drink there.
Posted by The Mad Brewer at 12:14 AM No comments:

Well, we made it to Antwerp but the internet access at the B&B doesn't work so I will only be able to do limited postings until Düsseldorf on Monday,

To bring you up to date, we had good sessions with Simon at the Wildeman and Robin at 't Arendsnest on Wednesday. Met up with Ron Pattinson of www.europeanbeerguide.net fame.

First stop in Antwerp (after a quick lunch) was the Kulminator and nothing much had changed. The beer menu hasn't been updated, but the good news there is the prices haven't either. We met up with Andy Change at the train station (he had flown in from LAX on Thursday) and he was impressed with the K and could spend a couple weeks there :)
Posted by The Mad Brewer at 1:09 AM No comments:

Day one (in Europe)

After a long, but uneventful couple of flights, we arrived in Düsseldorf. But we are really starting the beer trip in Amsterdam so its off to the train station at the airport to catch a train to Amsterdam 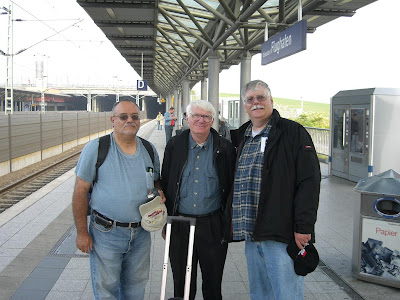 Luis, Tom and Fred waiting for the train to Amsterdam.

But wait, the travel gets even more multi-modal: Once in Amsterdam we had to take the #17 tram out to Osdorp (the 'burbs) where our hotel is. Of course, it was the start of rush hour and it took 45+ minutes. After checking in and dropping our bags it was back to the tram stop to catch it back into the old town (where the beer) is. Since we where going against traffic it was a bit quicker: only 30 minutes. A short walk to In de Wildeman and we were ready for our first beer. 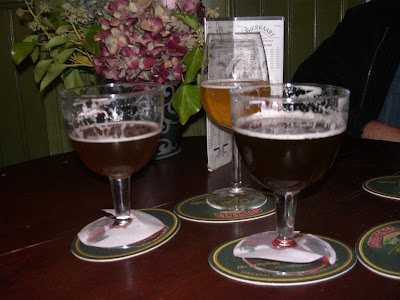 They are (in no particular order) Oijen Kluytmans, De Lekere Speciaal Bio and Drei Ringen Cor Deux. the Oijen was very spicy -- almost too much spice. We decided the Speciaal Bio was the best. Round two was Bavaria Hooge Bock (its Bock time in the Netherlands), Generaal Pardon Stout (billed as a "Belgian Imperial Stout") and Hellergoms Dubblel.

We need some food so we took a quick break for a sandwich and then headed over to 't Arendsnest. Our friend Robin wasn't but Maurits was and he did a find job of bringing us beer. We had the IJsbock from 't IJ brewery, Jopen Four Grain Bock and SNAP Pale Ale which was really an IPA and quite nice -- lots of cascade but that Belgian/Dutch yeast character. As a night cap we had Brand Dubblebock and the Ezelenbock.

We started to feel the beer and lack of sleep so it was back to the good old tram #17 and the hotel and sleep.
Posted by The Mad Brewer at 11:12 PM No comments:

This morning the first group of us are off on our 10th annual trip to drink the brewed twice a year "Sticke" beer at Brauerei zum Uerige in Düsseldorf.

In 1998 myself and four friends took off to Düsseldorf pretty much on a whim. I had some Frequent Flyer miles that were going to expire and the others said "What the hey..." and tagged along. The cities we visited on that first trip -- Amsterdam, Antwerp, Düsseldorf and Cologne -- is still pretty much the backbone of our schedule. There have been few changes -- Cologne was be relegated to a day trip from Düsseldorf and that first year Antwerp was a day trip from Amsterdam where now we spend 2 or 3 days there. In 2000 we added Bamberg as a regular stop. We also try and visit somewhere new each year, if even as a day trip. One year it was Münster, another Salzburg. This year our new (for me) city is Regensburg but we'll also return to Salzburg for the Bier IG (the Austrian beer consumers group) fest.

I don't know how well this blog will work as a "trip" report -- assuming we have a decent internet connection I will try to write something each day and upload some pictures.

So welcome, and I hope you enjoy this virtual (for you) beer trip.
Posted by The Mad Brewer at 7:56 AM No comments: