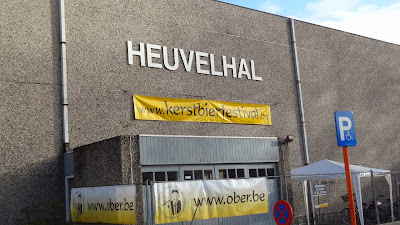 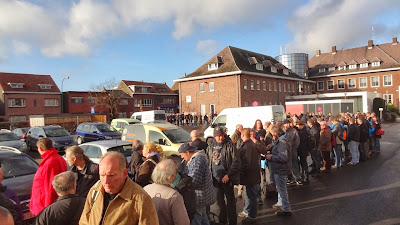 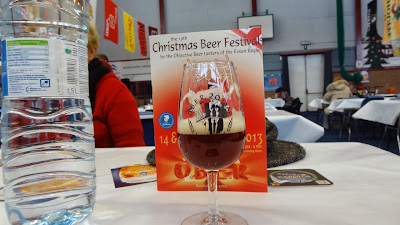 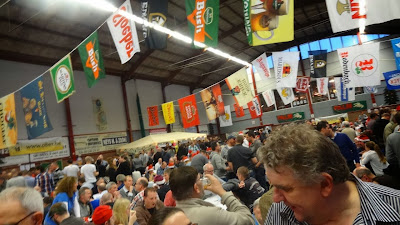 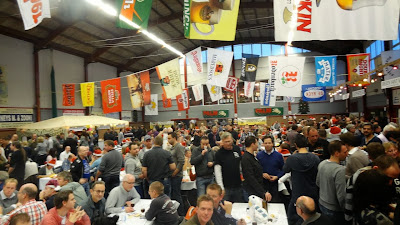 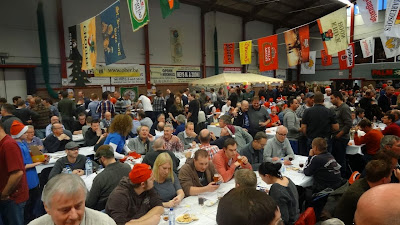 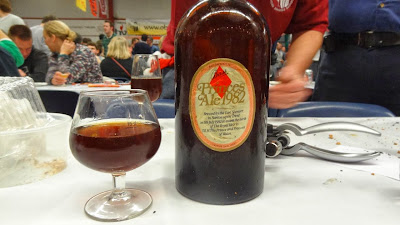 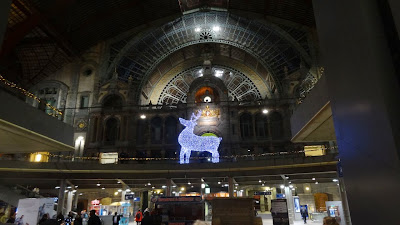 Email ThisBlogThis!Share to TwitterShare to FacebookShare to Pinterest
Labels: 2013, Kerstbierfest

Another Day Drinking Beer in Antwerp 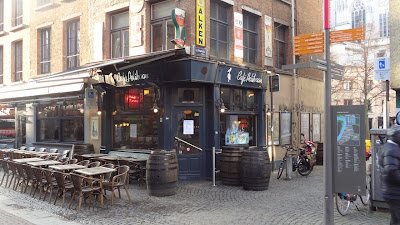 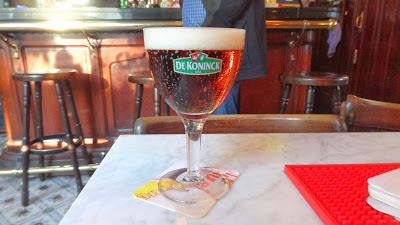 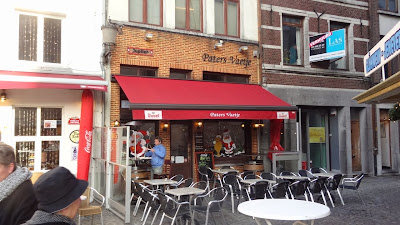 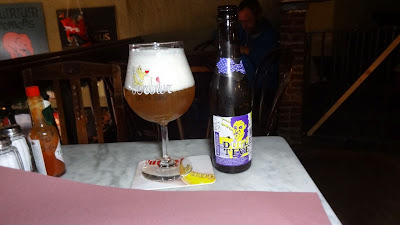 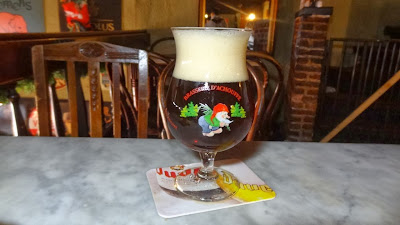 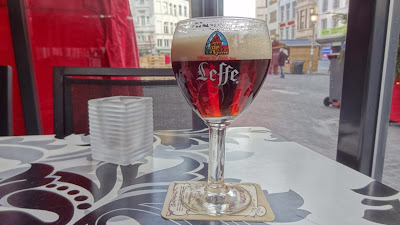 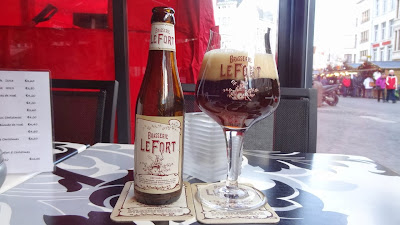 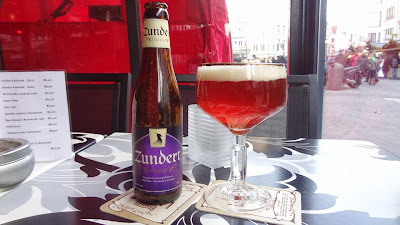 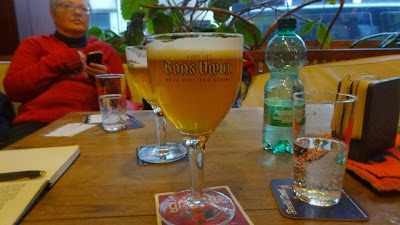 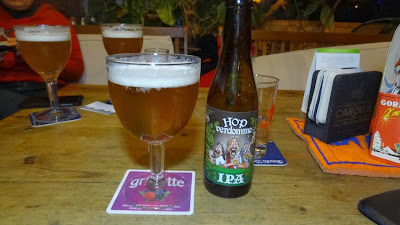 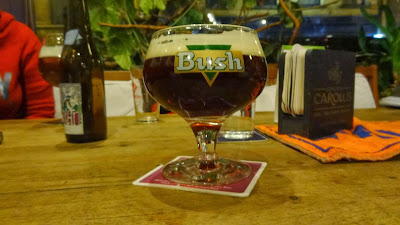 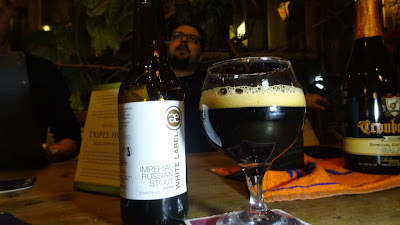 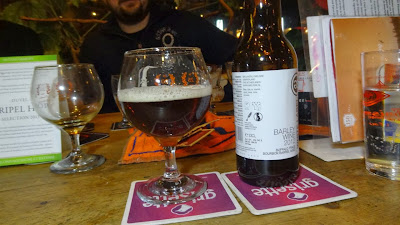 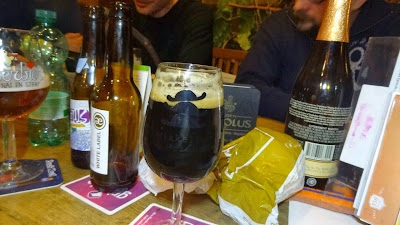 The flight into Brussels had a huge tailwind so we got in early, but that also meant
it was a real bumpy flight. Didn't get much sleep as a result.

But my room was ready, so I was able to unpack and rest a bit before heading out.

My first stop was a place I haven't been to for many, many years -- the Highlander. It is run my a Scottish couple and has a good selection of Single Malts. They also have a number of tasting flights for a decent price.

I wanted to go this trip because they are moving next year and I wanted to see the old place one last time.

My tradition first beer in Antwerp (whenever possible) is the local one, De Konnick. Highlander has it on draft, so I had one.

They had a big advert for Palm Hop Select, so I thought I'd give it a try. It was OK, but nothing special. No need to have it again anytime soon.

I asked where the new place was going to be and was told Stadswaag 18. That sounded familiar as a good beer place 't Waagstuk is on the same street. So I headed over that way.

It turns out they will be right next door to 't Wagstuuk. That is a gutsy move as 't Waagstuk has a much better beer selection. Though the Highland has a better Scotch selection so maybe it will balance out.

In the picture below, the Maes sign on the far left is from the closed pub where the Highlander will be. It didn't look as any work had started on any renovations. The move is schedule for March so there is some time, depending on what needs to be done.

Since I was right there, I went in to 't Waagstuk for a beer. It would have been rude not to have.

They had De Koninck's winter beer called, (strangely enough) De Koninck Winter. It is darker and stronger but has that De Koninck flavor. Went nice with the bowl of Tomato Soup.

I was wondering around the Old Town and ended up on the street across from the river (Ernest van Dijckkaai) and saw a place I'd not been to before -- Best Beers Cafe. They've been there for about a year, so it is fairly new.

Inside is a very modern pub. The beer list looks decent and will need some further exploration. They had Tripel Karmeliet on draft and free WiFi -- a combination hard to beat.


By now it was 4pm and I was late for an appointment.

The big decision for me is always what will my second beer be, because the first is pretty much set it stone.

If it is on the board, I will have an Avec les Bons Voeux. Nuff said.

The winner for beer #2 was Troubadour Westkust Black IPA. "Westkust" is Flemish for "West Coast" and I'm guessing they mean the west coast of the US, not Belgium.

It was a nice hoppy beer, but it was a bit too much roasty and full bodied compared to West Coast US Black IPA's.  But very enjoyable. It is brewed at Proef Brouwerij in Locristi.

The jet lat was starting to kick in (not to mention an afternoon's worth of Belgian beers). So I had  a nightcap of Gouden Carolis Hopsijnoor. I was going to go with the Mikkeller Black but it is an 18% beer brewed with coffee. So either I would fall asleep on the walk home or be so wired I couldn't sleep.

The Hopsinjoor was a nice finish to the evening.

BTW, you can check out www.AntwerpBeerGuide.com for details on pubs in Antwerp. At the time this is being written it still is a work in progress.
Posted by The Mad Brewer at 10:58 PM No comments:

A trip to the Munich suburbs

We caught the S7 line out to Pullach, intending to visit Isar Bräu a lovely little brewery,  in a converted train station, only to find out it was closed for renovation. So we hopped back on the S7 and took it back thru town and into the south east Munich area to Perlach home of Forschungs Brauerei.


The brewery was founded in 1930. The name translates as "Research Brewery" so I guess it was somebody's "pilot brewery" at some point.

We started off with the "Sommer Hell" and "Naturquell Dunkel." Unlike all of the other Munich Dunkels we've had, this one had an actual roast malt character. And the Hell, while lighter in alcohol had a wonderful refreshing flavor.

It was well past noon so we ordered a bit to eat -- Käsespätzle -- the German answer to "Mac and Cheese."


Next up was the Pilissimus Export. I had heard good things about this, Jim and I each got one.

Wow, was this a nice beer -- by far the best one in Munich and probably the best since Bamberg. At 5.6% it was a tad strong but I could drink it all afternoon.

Until a few years ago they were only open April to mid-October but now are open year round. The beer garden was clearly the main area but there was a quaint inside pub as well.


The final beer they had on tap was the St. Jakobus Blonder Bock. It was more amber than blond and very tasty. But at 7.6% on a warm afternoon, it was a bit nap inducing, so we split one.


There were people in the beer garden drinking multiples of these -- I guess they were not at the end of a 2+ week beer trip. 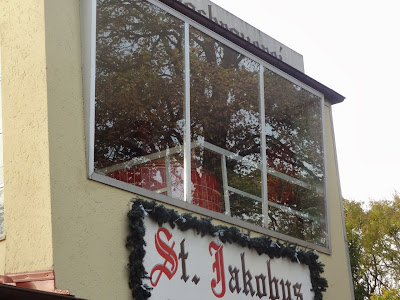 You can just make out the brewery in the upper story of the buiding. Looks to be the original kettles.

We headed back to town for our St Jakobus nap.

We headed back towards the Augustiner Braugaststätte but along the way we came to the Gaststätte Bavaria and I remembered I'd had a nice dinner years ago, so we stopped in for dinner and a beer.

The only draft beer was the Augustiner Hell, which is what I would have had, had we made it all the way to the Braugaststätte.

This by far the best of the "big" Munich breweries and the first few sips were nice, but by the end of the glass I was getting bored and really didn't want another one. That seems to be my problem with most Munich beers -- no staying power.

While we were eating the place started to fill up and soon was packed with locals having a good time on a Friday night. 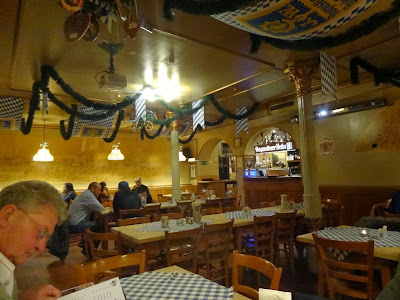 Tomorrow we travel to Frankfurt for one night and then fly home early Sunday morning. It has been a good trip but it will be good to get back home.

We decided to walk down to the Viktualienmarkt lunch and a beer.

There is a biergarden in the center but it was absolutely packed (being lunchtime on a nice day) so we wandered to the far side to Der Pschorr, a Hacker-Pschorr pub.

We had a Hell and Dunkel and some soup. The soup was good, the beer fair.

Next up was the Paulaner Bräuhaus on Kaputziner Platz. This is a brewpub that Paulaner runs. On the way, pointing down a driveway we saw this... 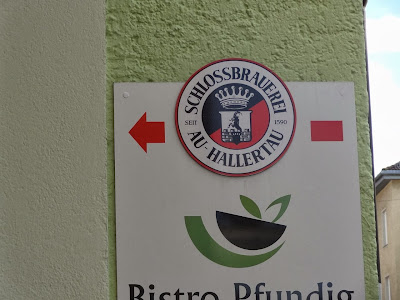 I am not familiar with Schlossbrauerei Au-Hallertau, but that is one of the traditional hop growing regions of Germany,  so it seemed worth a stop.

In the middle of a courtyard was a small bistro.

The beer was quite nice, definitely more bitterness than the typical Munich beer.

We continued on to the Paulaner Bräuhaus. This was once the Thomasbräu brewery before Paulaner bought them over a century ago. 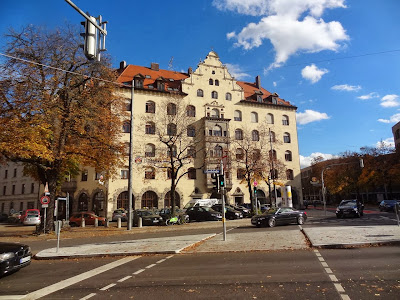 As is typical of German brewpubs, they had the standard three colors of beer: yellow, brown and white (actually, that can be said of most Munich pubs as well) 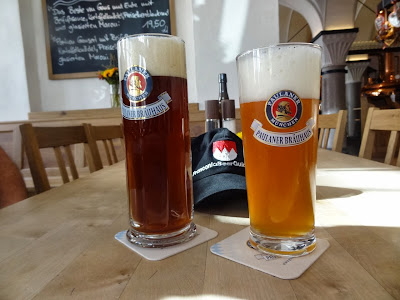 We had the Dunkel and Zwickl and they were decent. Much better than the typical German brewpub beer. They were brewing while we were there, so that was a bonus.

We didn't eat, but the food looked good and the room is very nice. Would be worth a meal stop if in the area.

We wander around some more, seeing some sights. We ended up at the Schnitzelwirt which is a Spaten pub.

Many years ago -- before I had traveled much to Germany -- Spaten was my favorite German beer. It was drinkable and OK with the schnitzel but that is about the best I can say. Travel to Bamberg will skew your taste buds.

The Schnitzel was OK, but nothing special and a bit pricy (but this is Munich). I'm not sure I'd go back to the Schnitzelwirt.

Just down the street is the Augustiner Grossgaststätte so we had a night cap there. This is my favorite Munich beer, but I'd take almost any Bamberg beer (except Klosterbräu) over it. Just goes to show.