Technical problems with getting the photos off the camera, so only pictures for now... 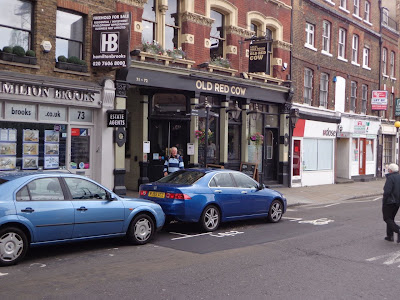 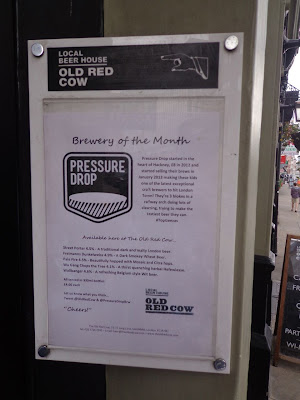 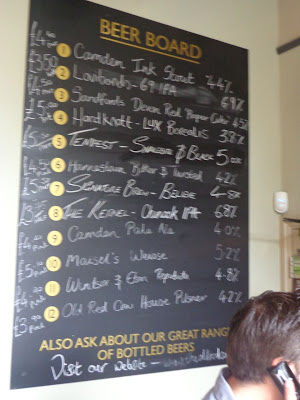 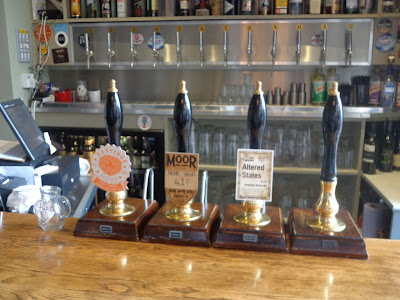 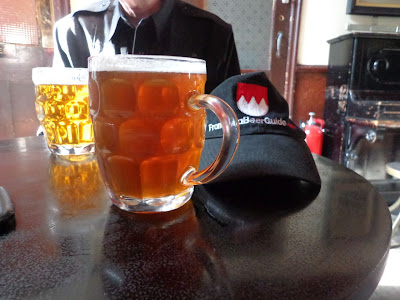 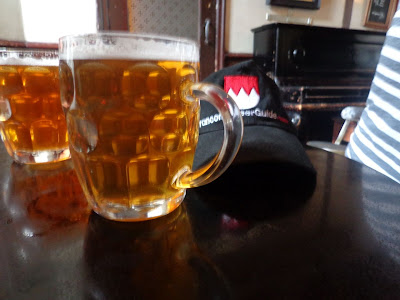 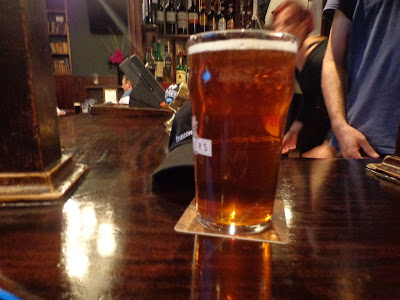 Normally, the Olde Mitre is only open one weekend a year -- the weekend after the Great British Beer Festival. So we headed over to enjoy a rare Saturday pint there.

A definite Scottish theme going on: Two beers from the Highland Brewery in the Orkney Islands, a Dark Star 80 Shilling and Deuchars IPA. I started with the Highland The Duke IPA.

It had a nice fruity flavor and nicely hoppy in the finish. A fine beer.

Keeping with the theme, I had their Dark Munro Mild next. Probably the wrong order as this was lower in alcohol and milder in flavor but still quite nice and very drinkable.


I actually did have another Duke before we left but once picture of it was enough.

We headed over to The Craft Beer Co on Leather Lane. They have four establishments of that name now. This is the original, just over two years old.

There is always a great selection and the first beer was a difficult choice. They seemed to have quite a few beers from Tiny Rebel, many of which I had previously tried. I chose the New World Red from the Saltaire Brewery.

They have quite a few handpumps and even more draft handles, so there is always something to try.

One Tiny Rebel beer I hadn't tried was the Urban IPA.  A very nice beer, not overly hopped and very drinkable.

It was time to move on, but there was one beer that was begging to be tasted: Siren Craft Beer's The Big Inflatable Cowboy Hat. This was a colaboration with Pizza Port Brewing of Southern California.  It is billed as a 10.5% Double IPA. I enjoyed the beer but my problem with it was it is just too filling. A 4oz serving would just about be right. For that reason I wouldn't call it an IPA of any sort. A nice beer but share it with a friend.

We hopped the Tube to Euston Square and were soon at the Euston Tap. I love this place.

The first think on the cask board was Kelham Island Pale Ride. This was the Champion Beer of the GBBF many years ago (2004) and has been a favorite if mine ever since. Hadn't see it in a while, so I had one here.

I then took the time to read both beer boards and saw they had Schlenkerla Lagerbier, the unsmoked Helles that is hard to find in Bamberg but is being increasingly exported. I had one. It was great.

It was time for some food so we walked around the corner to the Bree Louise. They still had the Titanic Plum Porter on, so I went with that. The plum flavor came thru more than I remembered from last time. Don't know if it was different cask or whether it was just time. Still very nice.

Pot Pies are the specialty at the Bree, but I felt the urge for some fish, so Fish and Chips it was. All was great, except the mushy peas. I am sure these were fine as mushy peas go, but I am not a fan of vegetable abuse.

Email ThisBlogThis!Share to TwitterShare to FacebookShare to Pinterest
Labels: 2012, London

First stop was the Porterhouse in Covent Garden. I realized I had drunk more Fuller's ESB than Oyster Stout and that was a condition that could not last. The Oyster was great as aways, but not quite up to what it is in Dublin.

After soon lunch and another Oyster, we caught a bus towards the financial district. In an old convert bank is Crosse Keys, what has been the my favorite Wetherspoon's pub in London.


In times past, it was often difficult to choose a beer. But their selection is much more mainstream than in the past (and that is not just because I've become more choosy). I ended up with a Seven Stone Weakling (translation: "98 lb weakling") from Lymestone Brewery in Staffordshire. A very nice pint of Ale.
The next beer I had I won't mention.  I am giving the brewer the benefit of the doubt that the cask had just been on too long. The bartender graciously took it back and asked if I had another choice. I went with Bateman's Yella Belly Gold.


It was a very clean and refreshing beer, and the website says it is 42 IBU but I would have like a bit more bitterness in the finish. But I say that about lots of beers.

We caught a bus going north to the Shoreditch area, home of a number of new pubs. The first was the Well and Bucket.

It is a great example of a "modern" pub -- not it it's decor but in it's mix of cask beer and craft beers on draft (i.e. keg beers). Lagunitas IPA seems to be the American beer of choice for these pubs -- at least this week. I went with the Camden Ink -- the stout from the nearby Camden brewery.

Ink is a good name for this beer. Intensely roasty it had an almost ink-like note -- in a good way.

The pub itself was very relaxed and friendly feeling. If I lived in the area it could easily be my "local."

We walked back towards the main street (passing the London area's second Brewdog pub -- no desire to pay £10 for pint of ordinary IPA) and headed for the Crown and Shuttle.

They had a few more hand pumps than the Well and Bucket but the mix of beers was similar in nature (Not that many overlaps, so worth visiting both)


I went with the Redemption Brewery's Big Chief. I expected something big and overhopped but it was a pleasant 5.5% beer. Well hopped, but not overhopped.

We hopped a bus headed west and walked down St John's Street to another new-ish place, the Longroom.


As you might guess from the name, the pub is one big, long room.  Again a nice selection of cask and keg beers and a nice comfortable feel.

They had Oakham Ales JHB, a beer I hadn't had in many, many years. It is only about 3.9% so I really should have had it earlier in the day, but it still went nicely with my Salt Beef (translation: "corned beef") sandwich.

I don't know if this is in the order of priority, but I can't disagree too much.


We headed over towards another place with good food and beer, but by now it was well into Friday evening and the place was packed. So we left for another day and went back to our rooms.

Last Day (for me) of the GBBF

The fest runs thru Saturday, but starting Friday it gets very crowded, so we usually go pub walking instead.

My tradition is to drink ciders and perries on the last day. I started off with a couple of Welsh Perries that were quite nice.

I had a couple more English perries and one cider that was aged in an Irish Whiskey Cask -- that one was interesting but half a pint was more than enough.

Lunch was Chicken Tikka and a couple of porters from Cornwall.

The rest of the afternoon was trying all the porters and stouts I had missed the other days. Soon the hall was so crowded you had to fight your way to the front to get a beer. That is the signal to leave.

So I had once last beer. It was the only full pint I ordered at the fest and the only non-British beer: Schlenkerla Märzen from Bamberg, gravity fed from a wooden barrel. They don't go thru it as fast here as they do in Bamberg so it was not quite as fresh but still very nice.


I'll leave you with a final shot of hall just as we were leaving....

Friday will be more walking around London, drinking beer.
Posted by The Mad Brewer at 2:10 AM No comments: