While at the Euston Tap on Thursday, we noticed they had a number of low alcohol beers, 2 of which were below 3%. We thought it might be a good idea to start our day there, with a fresh palate. Unfortunately we got there too early and rather than stand around waiting, we walked over to the Bree Louise, which opens at 11:30am

Since we were going to soon drink some low alcohol beers I went with the lowest one I saw at the Bree -- the Windsor and Eton Parklife. A very refreshing start to the day,

After the beer we walked back over to the Euston tap, where we were informed they would be opening late as somebody forgot their keys and they had to go back home and get them. So back to the Bree Louise to pass the time.

I order the Redemption Hopspur a 4.5% Amber ale. A nice balance of malt and hops.

It was getting past lunch time, so we ordered lunch and that called for another beer. Since I had had one Windsor and Eton beer, I went with the other one they had on hand pump -- the Conqueror Black IPA. At 5% it is a step up from the Parklife. A very tasty beer.

By this time we figured the Euston Tap would be open so we wondered on back. The 2.7% cask beer was gone but they still had the 2.9% Kernel Table Beer and the Thornbridge Kzara, their Kölsch style ale. I went for the Kzara, Tom the Table Beer.

The Kzara was probably the best "Kölsch style" beer I've had brewed outside of Cologne. It would be right at home in Cologne. The Table beer was amazing -- very hoppy and obviously low alcohol but very tasty. We need more beers like this.

Next up was a beer called Teleporter from a brewery I'd not tasting before, Summer Wine. They call it the "Malt Porter" and it really is rich and malty. Hopped with English hops -- which is a nice change. You'd almost forget that they grew hops here, what with all the American, New Zealand and continental varieties used.


It would be easy to spend the whole afternoon at these two pubs, but we had places to go and beers to drink.  Two final pictures from the Euston Tap -- they cask board and the draft (keg) board.

Next on our list is one of my favorite places in London, the Southampton Arms. We caught a 214 bus from alongside St Pancras station and headed north. The Gospel Oak stop leaves you directly in front of the pub.

I started off the Redemption Rock the Kazbek, a 4% blonde ale single hopped with Czech Kazbek hops (see what I mean). Very delightful and refreshing after the long, hot, dusty, 30 minute bus ride.

Next I went with Dark Star Genesis, a unknown (for me) beer from an old favorite brewery. It looked to be maybe a mild, but it did have a bit of diacetyl but in this part of the world that usually is a feature, not a bug and it was not objectionable.

Keeping on the darker theme, I next had East London Brewery's Quadrant Oatmeal Stout. I don't know what "Oatmeal Stout" suggests to British drinkers, but in the US I would expect a beer that was full bodied, almost "chewy." This was fairly thin and had just a little bit of sourness. It was not bad at all -- I had no trouble finishing it -- but I expect something was lost in the translation from British to American.

My final beer at the Southampton Arms Dark Star Red Shift. This is a hard beer to explain. It is at its base a red ale, made with traditional floor malted English malt,  hopped with Czech, German and Aussie hops (there it is again) and fermented with a Belgian yeast. A strange combination but it works.

I love this sign out in front of the pub... 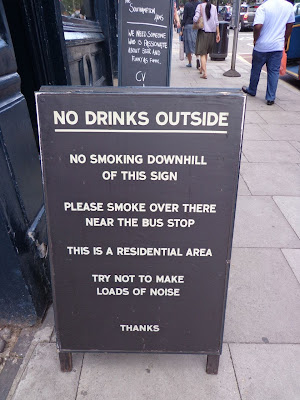 Not too far away was another pub that was recommended to us by a friend, the Pineapple


This is very much a local's pub and while the beer selection is no where in the same league as the Southampton Arms, it was an enjoyable stop. I had a Cornish Crown SPA (strong pale ale) though at 4.8% it would be called "strong" back home.


After a short bus trip, we arrived at the Scottish Brewery Brewdog's first London area pub.


All my local beer friends rave about this place and Brewdog beers in general. This surprises me because the majority of the beers I've had from them were not very good and in many cases actually flawed and poorly brewed. No beer style I know have lists acetone in the flavor profile but I've had that in three different Brewdog beers over the years.

I decide to try the IPA with Amarillo and Galaxy hops. Happily, no acetone and no flaws.  Back home I would say it was decent strong IPA. But then again it was £3.55 for a 1/3 pint which puts it at £10.65 a pint or over $16, a tad expensive even for London. No way was this a $16 beer. With my hand firmly on my wallet, I exited the premises.


Around the corner was another pub that a friend recommended we check out if in the area. the Black Heart. It is a music pub so don't go expecting to have a quiet conversation.

They didn't have a huge number of hand pumps but there were a few beers I hadn't had before. I went with the Williams Brothers Seven Giraffes, a 5.1% IPA brewed with seven different grains. A pleasant last beer of the evening, as it turned out 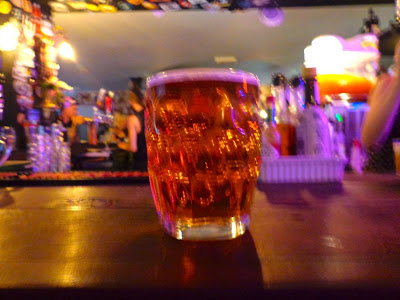 They have a limited food menu but quite interesting. Just about everything comes with Kimchi, something I've not seen to much in London. I ordered Kimchi Cheese Fries (think Chili Cheese Fries with kimchi replacing the chili). I don't usually put Jack cheese on my kimchi, but this worked. The kimchi was that bad. I've had far better in LA but also far worse.

Since nothing could top Kimchi Fries in Camdentown, we'll called it a night and went home.
Posted by The Mad Brewer at 1:28 AM