My WiFi stopped working over the weekend so I couldn't post. I am flying home today and will update after I am back. Thanks.
Posted by The Mad Brewer at 9:34 PM No comments:

So we get to Schlesslitz and the first stop is Bart Senger. If you haven't been there before, you should go. It reminds me of sitting in somebody's living room, with a bunch of neighbors all having a good time. It is a very small place and it was almost full when we got there. We got the usual "who are these guys" sort of look you always get when strangers walk into a neighborhood kind of bar -- not hostile -- not unfriendly even -- just curious. Anyway, no pictures because it just didn't seem right. It was somebody's living room, after all :) Oh, and the beer was great, but you probably figured that. It was served from a wooden keg on the counter and was dark brown in color.  And at €1.70 for half liter glass, a very good deal.
Next down the street to Brauerei Drei Kronen, run by the Lindner family. The place was empty (it had just opened for the evening session). The lager bier was as good as ever. For some reason this picture shows it as being fairly dark but it really is quite a bit lighter. 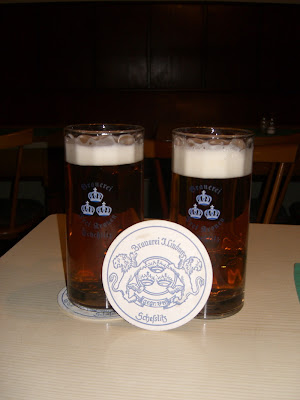 Then back to the bus stop to catch the bus back to Bamberg. The bus to and from Schlesslitz goes thru Memmelsdorf, so we decided to get off and have a quick beer at another Brauerei Drei Kronen, this one run by the Straub family. Herr Straub greeted us and took us to a table and told us about his Christmas beer, Balthasar. I had one of those and John had the smoked beer, the Stöffla. 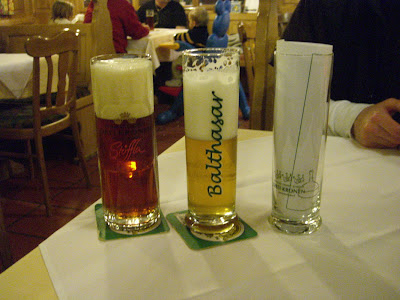 The Stöffla is lightly smoked using Weyermann smoked malt. Its a good example of the "revived" smoked beers in the area, but I still like Spezial better. The Balthasar was almost a bock, unfiltered and a much hoppier than I expected.  I was good enough I had a schnitt for the road -- and we missed our bus and had to wait for the next one. But the beer was worth it.
An uneventful trip back to Bamberg, where we got off next to Spezial and of course, had to re-calibrate our palate.
Posted by The Mad Brewer at 7:59 AM No comments:

John thought we should go for a walk -- to Bischberg and Brauerei Sonne. Walk? Ride a bike or take the bus -- yes, but walk? "Come on, it will be good for you" he said. So we walked -- and walked, and walked. It took less than a hour, so it can't have been too far. It did make the Zwickelbier taste very good when arrived. It tastes good when you take the bus so I don't give all the credit to the walk. 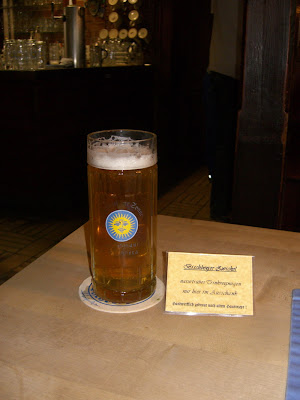 John wanted to take the bus to Schesslitz to visit the two breweries there, so we did take the bus back to Bamberg. We got off at Deutsches Haus which was the closest this bus went to the train station (where most of the buses to the country side depart). Deutches Haus is also a major bus stop and it turned out the Schesslitz bus stopped there and the next one left in about 45 minutes. Did I mention that Deutches Haus is two doors up from Brauerei Spezial? So you can guess where we spent the time. We split an U and a bottle of Bock. The U was a delightful as ever, fresh and refreshing. The bock was also good, but showed a little sign of oxidation -- but you had to really look for it. It was smoked, but the malt flavor dominated. 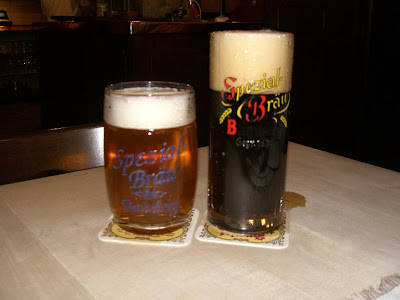 We had a quick beer at the Uerige stand in the Carsch Haus (where rumour has it, may close when the lease is up next year) before catching the subway and then the train. Trip was uneventful -- which is a good thing. We hit 304 kph at one stretch, which may be a record for me :)

John being young and an outdoor-sy type, thought we should walk to where we are staying -- Frank Wetzel's rental apartment on Schrottenberggasse. I agree, so long as it wasn't raining (it wasn't). On the way we stopped at Fässla and dropped off a couple bottles of Sticke for Roland Kalb (son of the owner). He had heard talk of it but never had tasted it. We got a couple glass of Gold-Pils in return. A fair trade for me, but John carried the bottles! The beer was very nice and fairly clean -- Occasionally Fässa has some problems with diacetyl but none this time.

Being fairminded as we are, in was our duty, having drunk in Fässa to also drink a beer across the street at Spezial. So we did. It was great as usual. They still had signs up for their bock beer, but had run out of draft just last week and had only bottles. So the bock waits for another day.

After dropping our luggage at the apartment, if was down the street to Schlenkerla for a couple. (They two still had Bock in bottles). John called it a night after that but I went down to Der Pekikan for a Huppendorfer (from Brauerei Grasser). This usually is a beer I liked, but this one was off -- a burnt raisin-y note that made the beer hard to finish. I did, but it was work.

No pictures -- didn't take any on Thursday.
Posted by The Mad Brewer at 11:52 PM No comments:

Wednesday morning we got a peek at the new Uerige building. We were told no pictures but I can tell you everything was gorgeous - especially the four new fermenters.

Our original plan was to make a day trip to Cologne. But Tom Perera suggested we go over the Dutch border to Venlo to a pub there, De Roeëje Lieuw (Red Lion). Venlo is in one the the two Dutch Liuburg provinces and he only serves beer from those and the Belgian Limburg province.

Venlo is about an hour and fifteen minutes from Düsseldorf on a direct train. I had had the Venloosch Alt before in Amsterdam, so I knew there would be at least one beer to drink.

After we arrived and walked in to the Market Square, we found the Red Lion but it was closed. So we stopped in down the street at In den Dorstigen Haen for lunch a couple of beers: Gouveneur Brune, Gouveneur Blonde and Lindenboom Herfstbock. All were good and clearly Dutch.

After lunch we went back to the Red Lion and now there was somebody in there. We knocked on the door and the proprietor, Louis, came out and told us he openned at 6pm! We explained we were weary beer travelers so he invited us in for a beer. After a nice conversation and a Venloosch Alt, it was clear Louis had word to do so we said our goodbyes and headed back to the train station. But John pointed out a cafe that had Hertog Jan Grand Prestige on draft, so we made a stop. This is a beer I like when I've had it in bottles in Amsterdam. It holds up well to the strong, dark Belgian Abbey beers. However, we were no so impressed with the draft version. There was definite acetone aroma that got stronger as it warmed up. We finished it, but didn't feel the need for another. 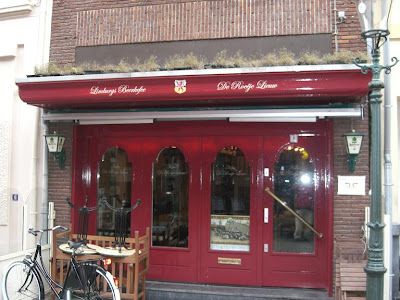 First of all, it is a cold and wet day. When I got to Uerige for our afternoon session at about 3:30pm there was nobody standing outside. I don't think I've ever seen that! 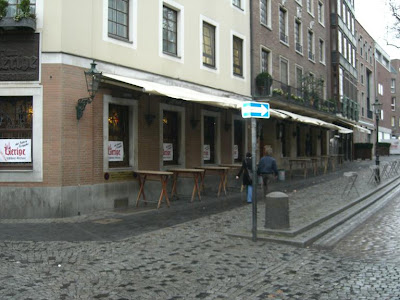 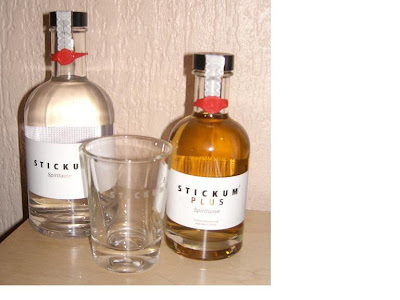 Haven't tasted it yet -- will report back when I do. On Wednesday we have a tour of the new facility, but with the condition that there be no photographs. Sorry about that.
Posted by The Mad Brewer at 10:22 PM No comments: 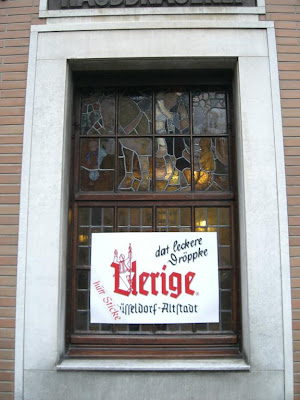 It is alcoholic (6.9%) and malty -- so much that it covers any hop flavor and much of the bitterness. Very drinkable -- before we realized it we had drunk 4 each. 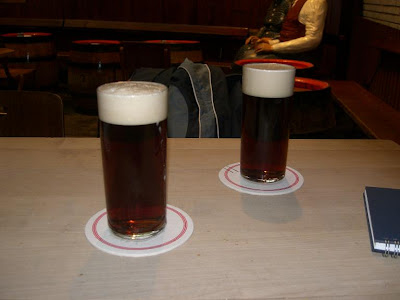 So we decided to take a break and ended up walking by the Pilsner Urquell Brauerei Ausshank and I noticed they had U Fleku back on the menu. So we went in and discovered they also had another dark Czech beer -- Kozel Černý from Velkopopovický (Which is owned by Pilsner Urquell). The U Fleku was as good as I remembered, but the Kozel didn't have a lot of flavor and had that aftertaste I associate with color beer (e.g. SINAMAR from Weyermann), They also had ads for Budvar Dark but didn't actually carry it. 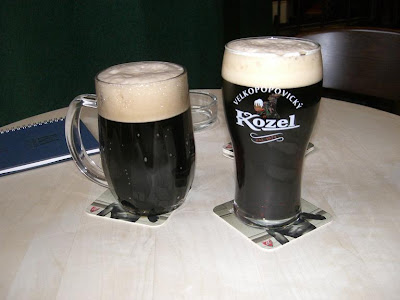 Posted by The Mad Brewer at 4:55 AM No comments:

I arrived in Düsseldorf after a un-eventful (but long) flight. After dropping my stuff at the hotel, it was off to Uerige.

I was glad to see the following -- that I did have the correct day: 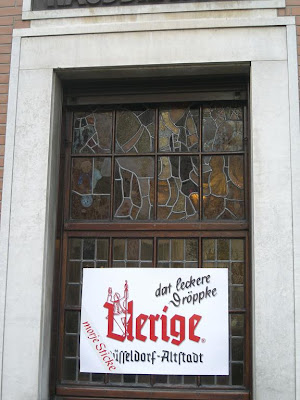 After a quick beer, poured in the traditional manner from a gravity fed wooden barrel... 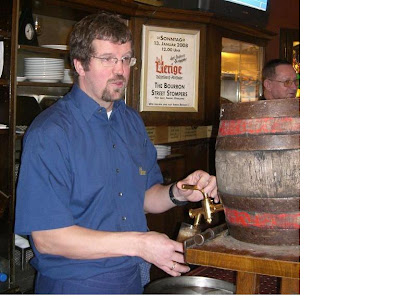 ...I popped next door to check out the new Stickum pub. This is were they sell the schapps made from Sticke and Doppelsticke. Well, it turns out at this point it is only open Friday and Saturday. But I am hoping that I can score a taste of them anyway.

Thru the window you can see a gleaming copper still and in the back the new bottling line. 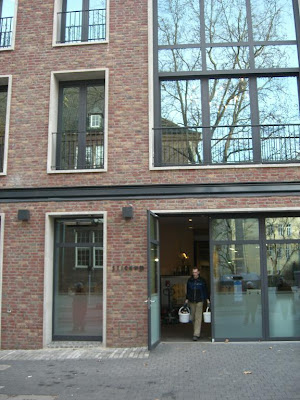 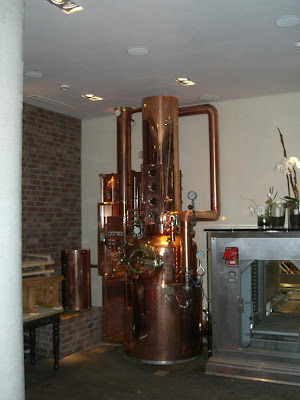 John from Boulder arrived and we proceeded to make the rounds of the brewpubs. When we got to zum Schlüssel, there was a curious sight: 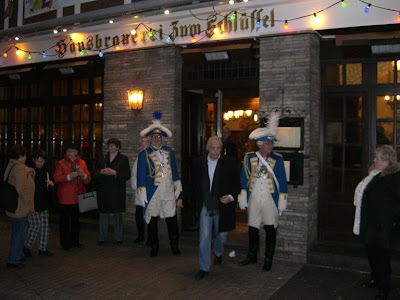 Had the Hessians invaded Düsseldorf? No, it turns out that Easter is very early this year and that means the Carnival celebrations start early and this was a get together of one of the Carnival Clubs.

Update: For those of you who didn't view our webcam appearance, you didn't miss much. Courtesy of Ray C, here is what we looked like (I'm the one with the light colored pants) 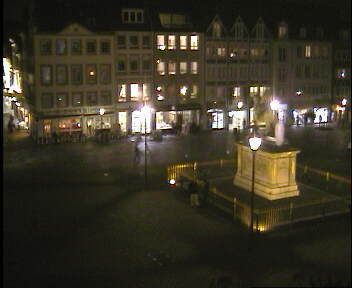 Hello to all five of my readers!

Last fall's diary of the 10 Annual Sticke Warriors trip was a disaster (the diary, not the trip). I ended up without regular internet access for most of the time in Antwerp, Düsseldorf and Bamberg. And Regensburg and Salzburg weren't much better -- I had to buy access from T-Mobile at exorbitant rates . So I gave up.

Well, I'm off to drink at the January Sticke for the first time, with a follow on visit to Bamberg (also a first for me in January). I will try again to post daily updates and pictures.
Posted by The Mad Brewer at 10:53 PM No comments: