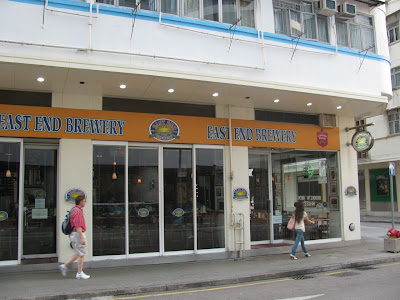 Entrance to the East End Brewery, Quarry Bay
This pub (it's not really a brewery) has pretty much the same beers as the Hong Kong Brewhouse, only it's air conditioned -- an important thing when the heat index is over 120!

The beer list
Unlike most of the places I've been so far in HK, westerners are in the majority. My contact here in HK said it is pretty much an ex-pat hangout.

The first beer was a Hong Kong Beer because I needed something cold and refreshing. Quickly that was followed by an Aldrich Bay Pale Ale.

Aldrich Bay Pale Ale
It is a nice British style pale ale, with a nice "cracker" taste and lighter on the hops than the American version.

I started talking with Alistair from Melbourne (Australia, not Florida) who is a fellow beer geek in town on business. It turns out he is headed to Bamberg (as well as Düsseldorf, Cologne and Berlin) this summer so I gave him some not to miss places. He told me the Melbourne craft brew scene was fairly active with a lot of good new breweries, but he is particular impressed with the craft beers of New Zealand -- I sense maybe a future beer trip!

Earlier I did stop by their other locations in the Causeway Bay district. They weren't yet open but it seemed to be pretty much of clone of the Quarry Bay operation. 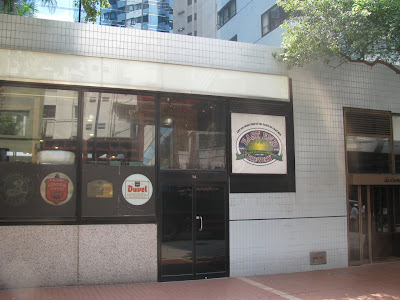 East End Brewery, Causeway Bay
I'll leave you with some more tourist photos. I made the obligatory trip via the Peak Tramway to the the top of Victoria Peak. Great views, but a real tourist trap -- the highest restaurant in the "Tower" on top was the Bubba Gump Shrimp Company -- real authentic Hong Kong cuisine there. It was a very hazy day -- on a clear dear it would be awesome. 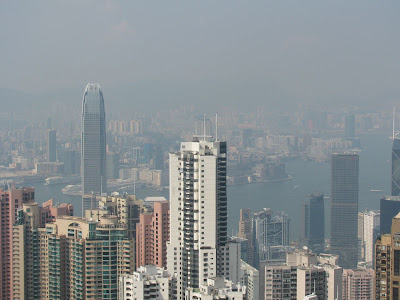 View from the Peak

They also have these funny looking double decker streetcars. They are so narrow and high it looks like a strong wind would blow them over... 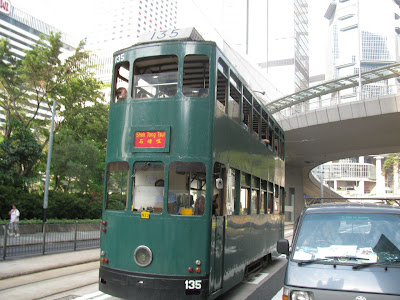 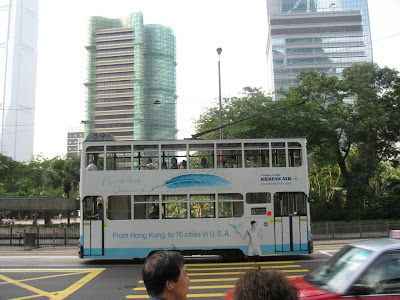 By the way, that high rise in the backround is undergoing some renovation, hence the green covering. The scaffolding is made of bamboo -- up over 20 stories! I'd read about that but it is impressive to see.
Posted by The Mad Brewer at 2:03 AM