We had good luck on all our connection and arrived in Bamberg about 11:30am. We went to our hotel for the night, Hotel Anders (formerly the Alte Post) and dropped our bags as the rooms were not ready. I can recommend this hotel. Their web site is www.andres-hotel.de

Then it was over to Spezial for lunch and a beer. 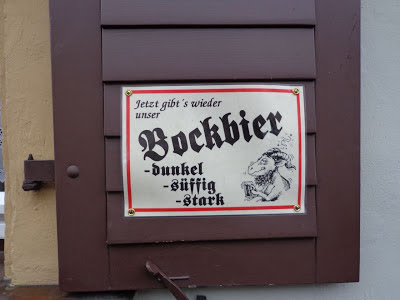 We all started off with the regular Lager. Delicious as usual.

Next up was the bock -- It is released in early November so don't get to try it very often.

It was good. I need to go back when I am not jet lagged and do an in depth tasting to give you a fuller picture of this beer.

We had a few more Lagers and managed to kill a couple hours and soon it was time go back to the hotel to check in.

After getting settled, we decided to head to Schlenkerla. Jet lag was setting in but over the years I've noticed that Schlenkerla has amazing restorative powers.

One of the tables in the Schwemm was empty so we settled in. First up was the Märzen (the standard lager there).  One of the downsides of visiting Bamberg so often is this beer loses it first sip impact. We you only come once a year or ever other year your mouth forgets how smokey this beer is and the first sip is a giant wake-up call to your tastebuds. I had last had it in June, so the memory was still fresh. The beer was its usual wonderful self.


The also have their new-ish double bock, Eiche from the barrel as well. This is the good news, the bad news is the Ur-Bock was taken off for the Eiche. Not only is this beer stronger (8%) the malt is smoked over an oak wood fire (Eiche is oak in German) instead of the usual beechwood so the smokey character is quite different.


It is served in a half liter goblet -- I wouldn't mid a smaller pour but you drink what you are given. The alcohol is well hidden and the smoke much subdued after the Märzen. Again, this is a beer than needs further study after the jet lag has been overcome.

Some local friends stopped by and what started out to be just a couple of beers turned into three more Märzens before we left. A good start to the arrival day.
Posted by The Mad Brewer at 12:32 AM