Tom Rierson arrived in late morning, his flight being an hour and half late (Bad US Air!). After he stashed his stuff, we headed down the street to a Wetherspoon's pub called the Masque Haunt. 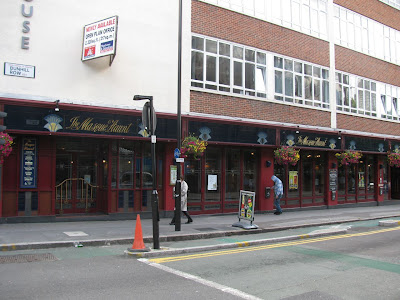 Masque Haunt on Old Street
I had a Welton's Heatwave, Tom a Nethergate Esssex Border and Luis a St. Edmund's Golden. All were good. The Heatwave had some hops and the Golden was refreshing but a bit bland (its brewed by Greene King, a larger brewer). The Essex Border was a very nice, typical Bitter. It had a touch too much diacetyl for me but Tom thought it was spot on. 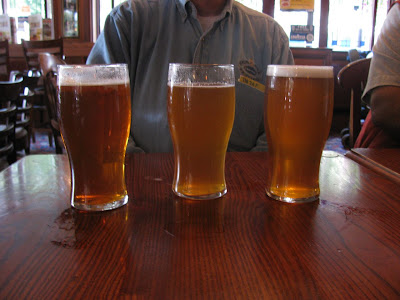 It being noon-ish, we decided to have lunch and another beer. Tom had a Ruddles Best Bitter, which at £1.29 for a pint is a very good deal. I had a "Tit-for-Tat", the summer seasonal from Robinson's. Both were nice.

It was starting to rain, so we headed back to the dorm so I could get my jacket. We just about got drenched on the way, but made it OK. Of course, after I got my jacket the weather was fine the rest of the day.

Tom wanted to visit Ye Olde Mitre a great little pub near Holborn Circus. As we headed in that direction, we realized we were close to the Jerusalem Tavern, the London taproom of the St. Peter's Brewery of Suffolk. So we made a slight detour. 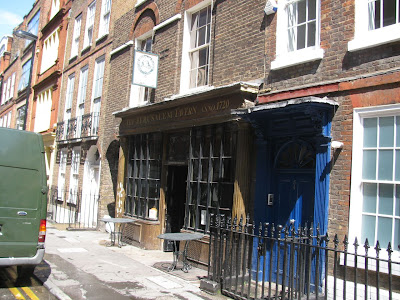 Jerusalem Tavern
Tom ordered the Mild, I had the Organic Best Bitter and Luis the Regular Best Bitter. You couldn't tell the difference between to two bitters, so the extra 10p may have been wasted. The Mild was very nice with a distinctive dark malt flavor. 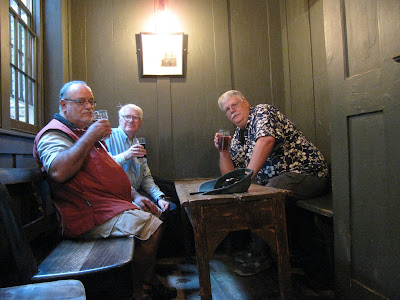 We continued on to Ye Olde Mitre, which is hidden in a tiny alley behind Ely Place and Hatton Gardens. The pub, the nearby St. Etheldra's chapel and the street Ely Place are a historical anomaly -- technically they are not part of London but are part of the Diocese of Ely, Cambridgeshire. In theory, even the local police have to ask permission to enter the enclave, though I doubt in this day and age that is still observed. 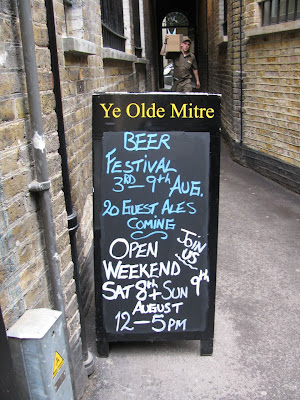 The alleyway towards Hatton Gardens 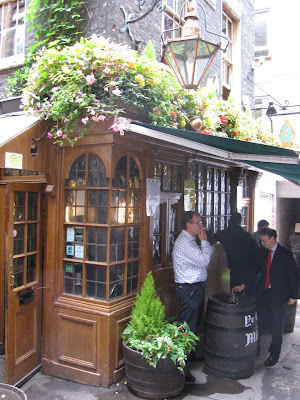 Ye Olde Mitre, Ely Place
Since I was last there three years ago, the pub changed owners and is now owned by Fuller's. We were afraid that there might be changes for the worse, but our fears were unfounded. They pub was basically unchanged and they still had a nice selection of beers. In fact, during the next week they were having a "Scottish Beer Festival" with 2 or 3 Scottish Beers on tap every day, rotating the casks were emptied.

Tom ordered a Deuchars IPA, Luis an Adnams Broadside and I had Saltaire Bavarian Gold. The Bavarian Gold didn't taste particularly Bavarian -- or even German -- but was a nice Golden Ale. I'm guessing they used German hops and hence the name. 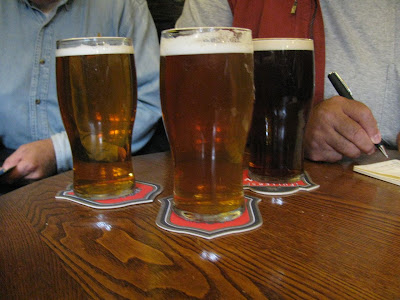 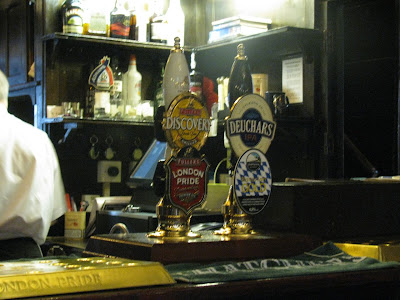 The back bar at Ye Olde Mitre
Just a few blocks down High Holborn is the Citie of York, one of the few places in London with cask Samual Smith's beers. So we headed down for a pint of Old Brewery Bitter. 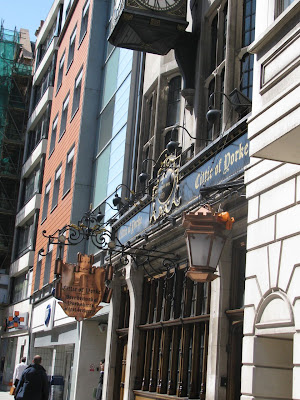 The main bar in the back is quite large with a vaulted ceiling. They have little enclosed booths along one side, with tables in the center. There is also a large bar in the celler and a couple of small rooms up front. 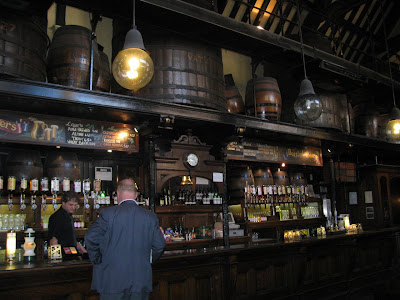 The main bar at the Citie Of York
They only have one cask beer, the Old Brewery Bitter, but all of the Sam Smiths beers are available in bottles and a few are also available as keg beer (the Lager and Stout). 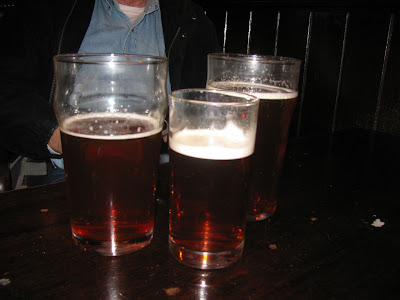 Two and half pints of O.B.B.
Tom was feeling the jet lag, but said it was too early to quit, so we hopped on the Central Line tube to the Monument station and walked a couple of blocks to Gracechurch Street, where one can find the Crosse Keys, another fine Wetherspoons pub.

The Crosse Keys used to be a bank and retains much of its former opulance with marble columns and a fancy ceiling. 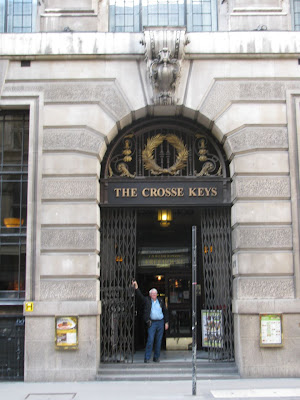 The Crosse Keys, Gracechurch Street, London
The have a large bar and an impressive number of beer engines (hand pumps) -- over 20. However many of the beers were on multiple taps, so the actual number of beers was quite lower -- much lower than I remembered from a few years ago. But the number is large enough and changes frequently enough that they have large video displays showing the beers! 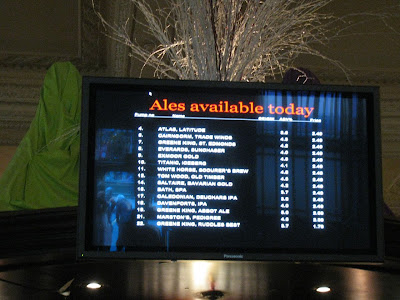 The video beer menu at the Crosse Keys
For the first round, I had a Titanic Iceberg, Tom a Cairngorm Trade Winds (from Scotland) and Luis a Tom Woods Old Timber. 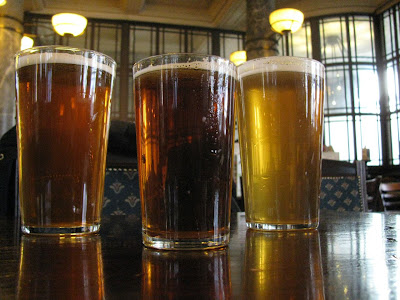 Cairngorm Trade Winds, Tom Woods Old Timber, Titanic Iceberg.
The Iceberg was surprisingly hoppy and with (American) Cascade hops. Later reading their website I learned it was a wheat beer, but that wasn't readily noticeable in the flavor. The Old Timber had a nutty and almost woody finish. An usual taste, but drinkable. The Trade Winds had a bit too much diacetyl and as it wormed up it was practically undrinkable. It was left on the table more than half filled.

Thursday night is Curry night at all Wetherspoons pubs, so we ordered the Curry Feast. The dinner comes with a drink, one of which is your choice of ale. So we ordered another round: White Horse Summer Beer, Everards Sunchaser and Bath Special Pale Ale (SPA). 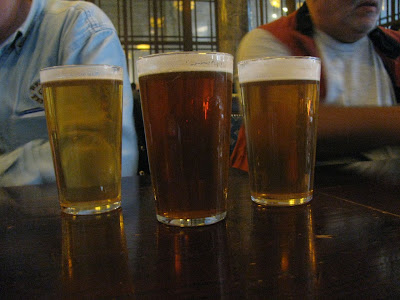 White Horse Summer Beer, Bath SPA and Everards Sunchaser.
Well, I have to say the choice of food was better than the choice of beers. We had had a White Horse Rudolph the Red Nosed in our British Beer on the Patio event earlier in the year and it was the only beer we didn't like. This one was not much better. It and the Everards were left on the table. Only the SPA was finished. It was a pleasant, refreshing Golden Ale.

After all those beers and big meal it was time to head back to the dorm and call it an early night. Friday will be a big day as well do an evening pub crawl in Wimbledon.
Posted by The Mad Brewer at 10:09 PM