We arrived in London without mishap. After few minor delays (baggage unloading delays, etc) we found ourselves in London's Paddington Station. While heading for the Circle Line tube station, I spied a pub on the upper level and remembered there was a Fuller's pub up there. It was lunch time, so we went and had lunch and a beer. After lunch, we took the tube to Barbican and after a short walk we were at our place of residence. I don't say "hotel" because it is not -- is the the Finsbury Residences of the City University of London. That's right, we're staying in a dorm room. Its one of the best deals for a summer trip to London, if you don't mind roughing it a bit (bathroom and shower down the hall). 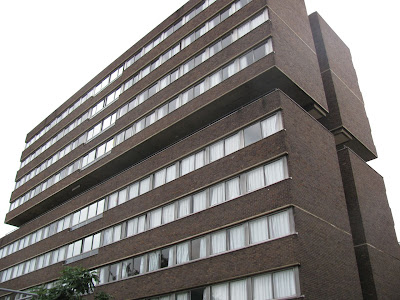 Where we are staying.
After getting unpacked and freshening up a bit, we decided it was time for a beer. We walked back to the tube station (after a stop so I could buy a UK SIM card for my phone) and headed for Covent Garden. A few blocks away from the famous Covent Garden Market is the London tap room of the Dublin Porterhouse Brewery. 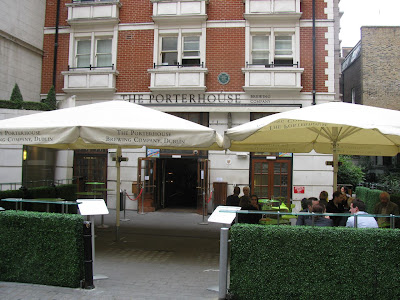 The Porterhouse brews a wide range of beers. They always have 3 "porters" (i.e porters and stouts), 3 ales and 3 lagers on tap. Their German style Lagers are as good as any brewed outside Germany and better than most. But I rarely drink them as they brew one of the worlds most interesting beers, the Oyster Stout. 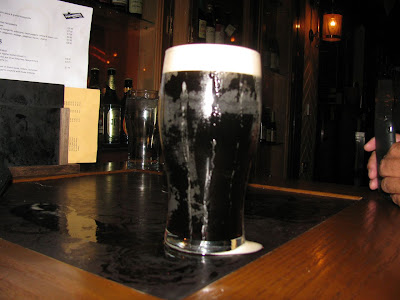 Porterhouse Oyster Stout
Oysters are used in the brewing process, but they don't say where. I would guess in the boil, but that is just a random guess. There is no oyster flavor in the beer, per se, but there is a certain "meatiness" that is hard to describe and makes this a beer I drink a lot of when I am in London. And yes, the menu does say the beer is not for vegetarians.

After a couple of pints, we decided to move on. Not far from the Porterhouse is Leicester Square, where the is a nice J.D. Wetherspoon's Pub (more on Wetherspoons later). So after a short walk, fighting our way thru the crowds of people looking for cheap theatre tickets (what Leicester Square is most famous for) we came to The Moon Under Water. 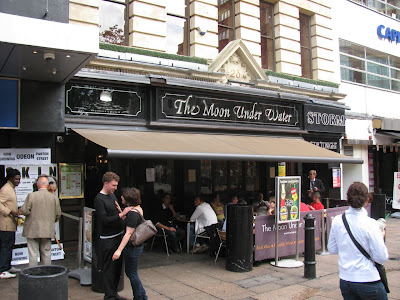 The Moon Under Water, Leicester Square
The name comes from an article written by George Orwell in 1946, describe what would be his perfect pub. In the article the pub was called "The Moon Under Water" and the Wetherspoon's chain thought it described their philosophy toward pubs so they named this one after the pub in the article.

I had a Phoenix White Monk while Luis had a Deuchars IPA. We both ordered a Chicken Tikka Masala for dinner. Beer and food were great. If a typical American beer geek had tasted the two beers, they probably would have guessed wrong as to which beer was called an "IPA." My White Monk was aggressively hopped for a British beer while with the Deuchars IPA you really had to search for the hops. "Two peoples separated by a common language" applies -- an IPA doesn't mean the same thing here as it does in the US. Especially not an IPA from Scotland. But don't get me wrong, both were great beers (the Deuchars was the Champion Beer of Britain a few years back). Just judge the beer on its taste, not what you think it should taste like from its name.
\ 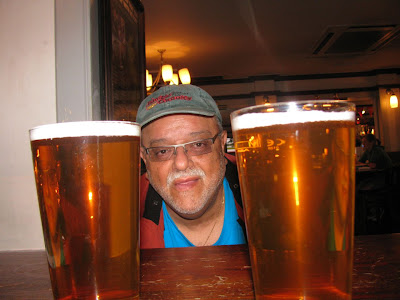 Phoenix White Monk and Deuchars IPA with Luis in the middle
Well, jet lag was finally catching up, so we headed back to our dorm rooms for an early night. Tom arrives in the morning. We'll probably be back at the Porterhouse as that is one of his favorite places as well.