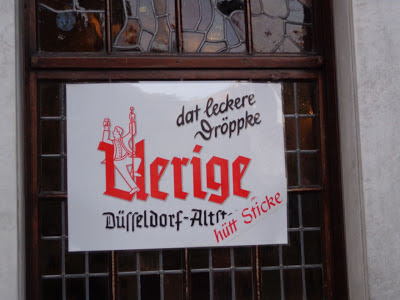 I snuck in a little bit before the official opening at 10am. It doesn't really do you any good until they tap the keg, but it was out of the wind and rain.

Soon they rolled in the barrel. They start out small in the morning, switching to larger barrels later in the day.

They finally tapped the barrel and I got the first glass...


The downside to the first glass of the first barrel was it is a little too cold. First impressions were of malt. It went down very smoothly. Once it warmed up a bit you could find some hop bitterness in there if you looked for it. But there was enough there that the beer didn't taste sweet -- just malty.  I didn't ask the ABV -- they will tell you the official 6.5% (what they print on the labels) but it does very from year to year. Judging by how I felt after three, I figure it the alcohol is a bit higher this year.

After three beers, I left to run some errands -- I needed to pace myself today. Around noon I headed back for round 2. The lunch they had today was Königsberger Klopse veal meatballs boiled in salt water with capers and boiled potatoes along with a beet salad. Very nice.

A few more beers with lunch. I was liking it more and more with each glass -- a dangerous situation. After four or five I decided to take a break until 4:30 when I was to meet up with some German friends.

When I am here with the "Sticke Warriors" group we always reserve a table in the Brauhaus. But the friends whose table I was "crashing" had their table in one of the side rooms. All night long I would run in to locals who would say "So you are here -- I looked for you in the Brauhaus, what are you doing here?" The price of fame.

Tuesdays at Uerige is Potato Pancake night and I needed some grease to counter all the alcohol, so I ordered some. These are more like "potato fritters" than pancakes and were just what I needed. You really see in the picture, but they come with a great chunky applesauce.

Before I knew it, it was time to call it a night. Nearly 3 liters of over 6.5% beer does me in these days. A sign of age, I guess.

One final tradition on the way home: across the street from Uerige is the home of the local herbal liqueur Killepitsch.  The local tradition is if you have one of these as your last drink of the night, you won't have a hangover the next day. It has always worked for me, so I wasn't going to pass it up!

They have a little window into their bar, where they will sell you a shot to go. A great way to cap an evening.
Tomorrow is Schlüssel Stike but I hope to make an early night of it as I have an early flight home on Thursday.

Email ThisBlogThis!Share to TwitterShare to FacebookShare to Pinterest
Labels: 2012, Düsseldorf