I wasn't going to post pictures of all the beers, since there are plenty of pictures of them already on this site (just click the label "Düsseldorf") but then somebody would claim I really didn't "touch all the bases" so here is at least one picture of each beer...

I started off with Im Füchschen. A few years ago they had some major equipment problems and switched to using hop extract instead of whole or pelletized hops. It took a while for them to get the recipe dialed back in. Dialed, they have. It is back to it's old delicious form. This called for another one to be sure.

Next on the path was the new brewery Kürzer. But they are more of a night club and don't open to evening. So I will have to come back another time. 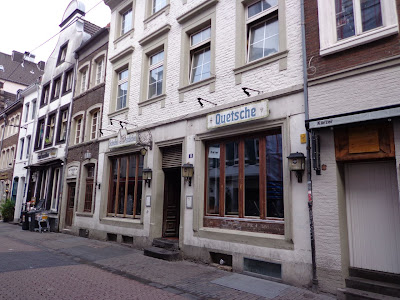 Then it was over to Bolkerstrasse for a Schlüssel Alt.


The also have a special strong alt, called "Stike" (Uerige's is "Sticke") and as luck would have it, one of the two days it is served is the Wednesday. So much for my easy day before flying home.

Across the street is Schumacher's Im Goldenen Kessel, their tap room in the Altstadt (the brewery is on Oststrasse, in the direction of the train station). But the beer is served from gravity barrels just as at the brewery.  For some reason, this tasted really good this morning. So I had another, and another.


Then it was off to my last stop of the morning, zum Uerige.

I must have gotten up on the wrong side of the bed this morning, or maybe I was replaced by a pod in the middle of the night, but today this was not my favorite alt. The Uerige had a bit of a harsh graininess -- if I were judging a homebrew I would say they maybe had oversparged a bit. It wasn't bad by any means, it just wasn't it's usual perfect self. I had another to be sure and it was the same (probably from the same barrel). Don't get me wrong -- it was perfectly drinkable.

Sometimes missed by visitors, there are a couple of brewpubs across the Rhine in the district of Oberkassel. One is part of a chain, Brauhaus Johannes Albrecht. I haven't been there for years but when I have been they have had two beers Messing (bronze) and Kupfer (copper). They were always fine but nothing special. As is common in these new style brewpubs ("American Style Brewpub") the beers tend to be a little under attenuated -- they could stand a few more weeks of lagering.  I decided to skip it again this trip -- I had enough of this style of beer on my bike trip this past summer.

The other brewpub is in an old street car train station at Belsonplatz. It has gone thru a number of incarnations over the years. For awhile it was owned by the same family that owns zum Schlüssel (Gatzweiler) and was known as Brauhaus Gatz.  The beer was never that good and at some point they stopped brewing there (the brewing equipment was covered in dust) and they served somebody else's alt as theirs. Then it finally closed.

Well, last year it re-opened as Brauhaus Alter Bahnhof, brewing Gulasch Alt. Why Gulasch? I have no idea, except it also starts with G as did Gatz so maybe it made things easier.

The beer was served from traditional gravity barrels and was quite drinkable. It had a bit of a raisin-y note in the finish -- which reminded me a bit of one of the large alt breweries -- but I couldn't dredge up which one -- and I am not about to go try them all to find out. The brewing system was no longer covered in dust and the control panel behind it was obviously active. I am not saying they don't brew the beer -- they probably do -- but a cynical and suspicious might have ideas.

You'd think a place that served "Gulasch Alt" might have a nice goulash on the menu. Think again. Sundays must be "Bavaria day" because they mostly had Bavarian style food. This is all the worse because Uerige did have goulash as they daily "soup" and it is very good and I passed on it because I knew I was coming here. There is a moral in that somewhere.

So I had the Haxeteller -- a chunk of Schweinehaxe with mashed potatoes and sauerkraut. It was fine, but heart was set on a nice spicy goulash.

Back across the river to the Altstadt, it was time for a bit of a break. They next place I wanted to visit didn't open until 5pm so I had some time to kill.

What place is that? A pub called Schalander on Kölner Landstrasse. It is about 5 stops beyond the Hauptbahnhof on the U74 or U77 line. If basically is right at the Ickerswarder Str stop. 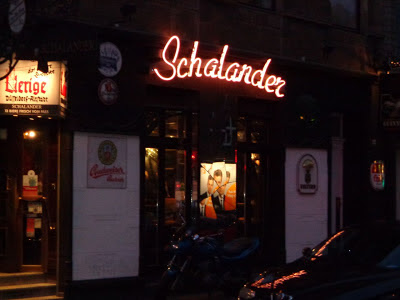 They are the closest thing to  "beer bar" I've found in Düsseldorf. They have thirteen beers on draft, including four Alt's: Uerige, Füchschen, Schumacher and Frankenheim. In addition they have Pilsner Urquell,  Budweiser Budvar, Andechser Spezial Hell and even Früh Kölsch.

One could do a number of different tastings, but I decided to go with the four alts. The waiter was quite confused -- one person ordering four beers. He must of asked if I was sure about three times, but he did bring all four.


One sip of the Frankenheim with that big malty-raisin finish and I knew what the Gulasch Alt was reminded me of.  It was not exactly the same but close. Frankenheim was always my favorite of the large alt breweries (it is 60% owned by Warsteiner).

And the good news was the Uerige tasted how I remembered Uerige -- a clean finish with a big bitterness -- much better than the one I'd had at the brewery. The Füchschen and Schumacher were much like those at the brewery.

One difference is these were all served from modern kegs -- that is, dispensed with CO2. I didn't really notice the difference that much, especially as it took me a while to drink all four.

By this time the jet lag was kicking in, so I called it a night.

Email ThisBlogThis!Share to TwitterShare to FacebookShare to Pinterest
Labels: 2012, Düsseldorf

Excellent coverage - thank you for this write-up.