Day two started out threatening to rain. It did so all day but luckily never followed thru.

I headed out towards the Torvehallerne Market. This covered market has about 80 stalls in two halls, plus some fresh fruit and vegetable stalls outside between the halls. There is a great selection of food, either cooked and ready to eat or from various specialty butchers, cheese sellers, etc.  On stand is called Omegn and in addition to meat and cheese they sell beer.

Amsterdam is known as a city of bicyclists. Copenhagen certainly meets Amsterdam, if not exceeds it in the number of cyclists and the amenities they enjoy. Sometimes you have to wait quite a while to cross a street because of all the bicycles.

Anyway, they start them young. In the square in from of the market was a group of kids being given riding lessons 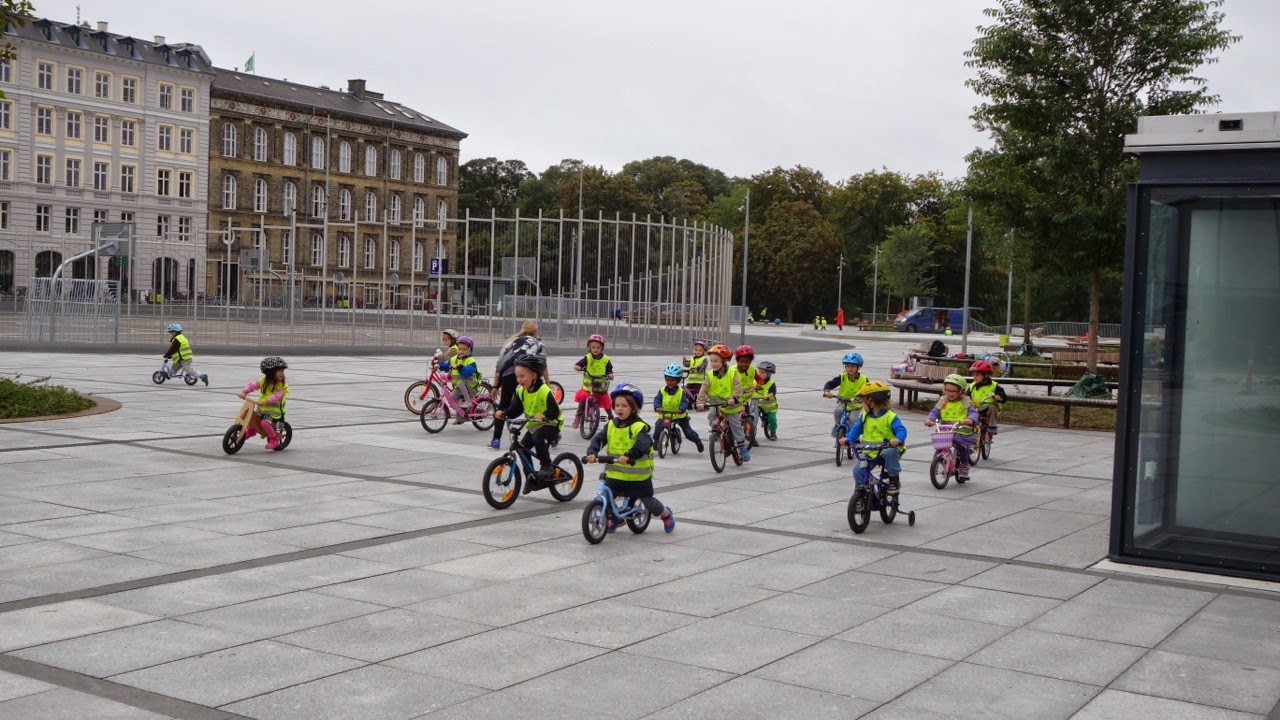 The Torvehallerne is modern building... 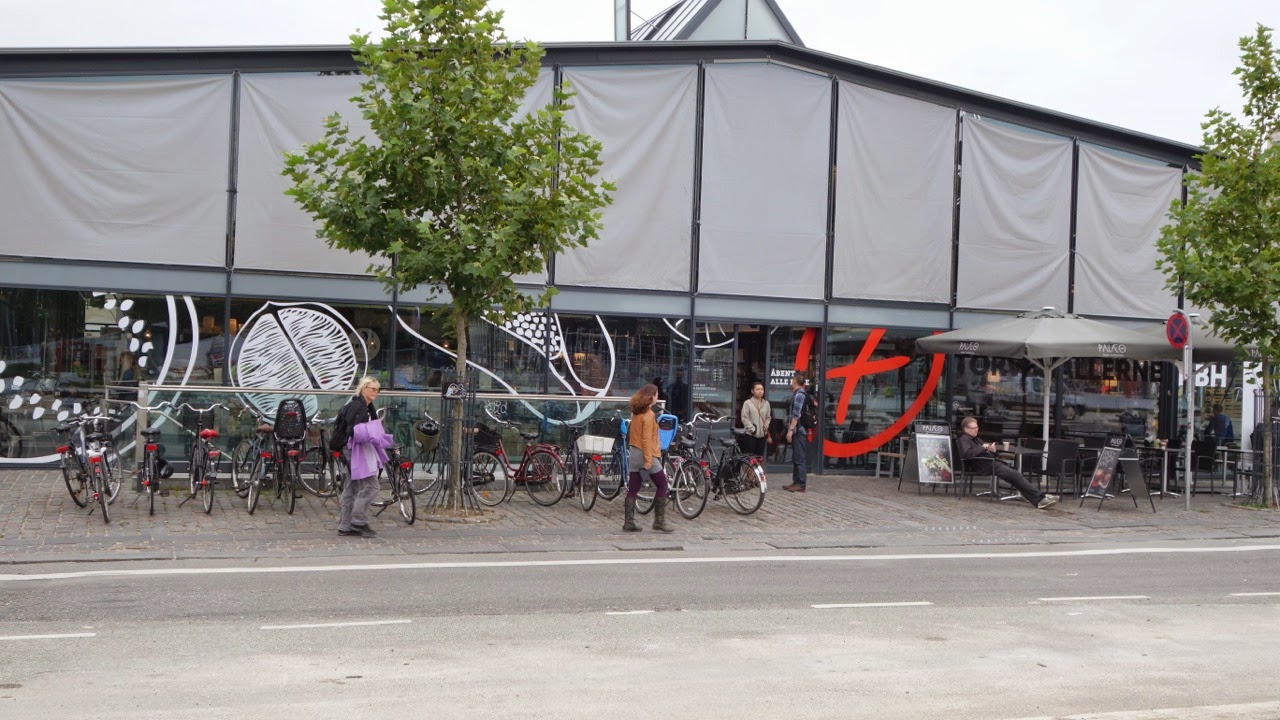 And Omegn is easily found at stall E2 on the south east corner of the first building. 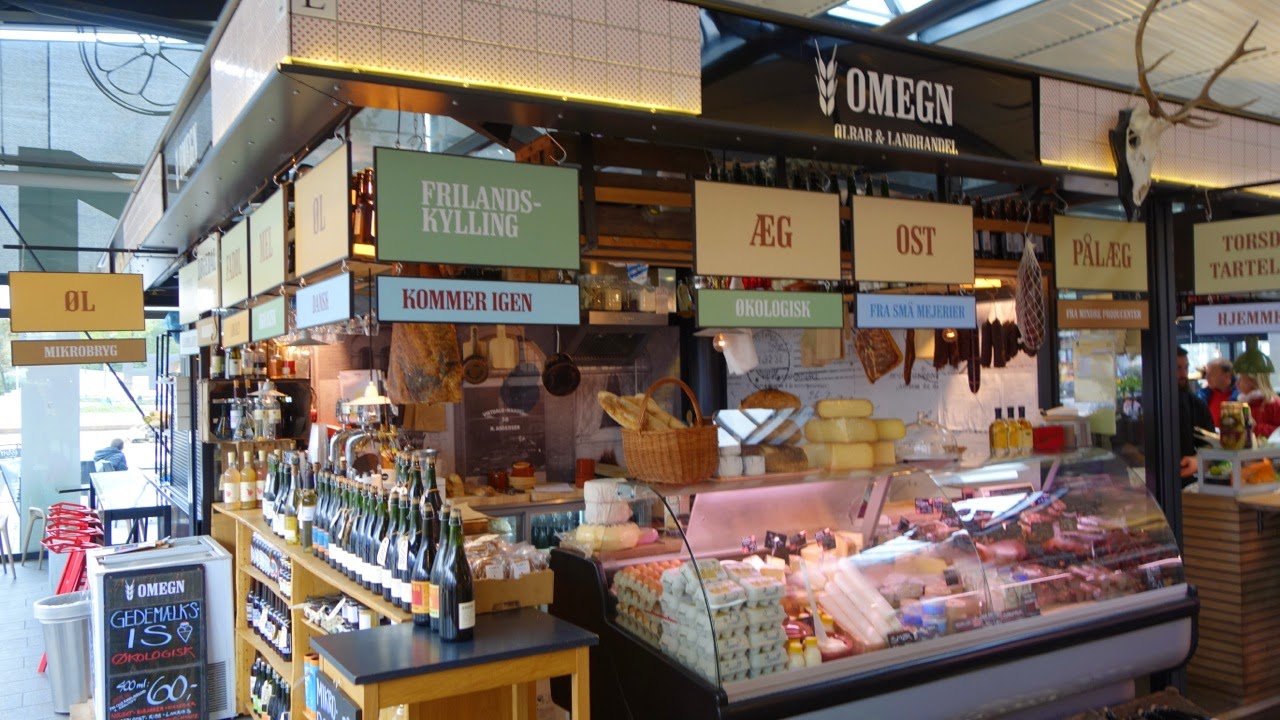 Only five taps, but all looked interesting. 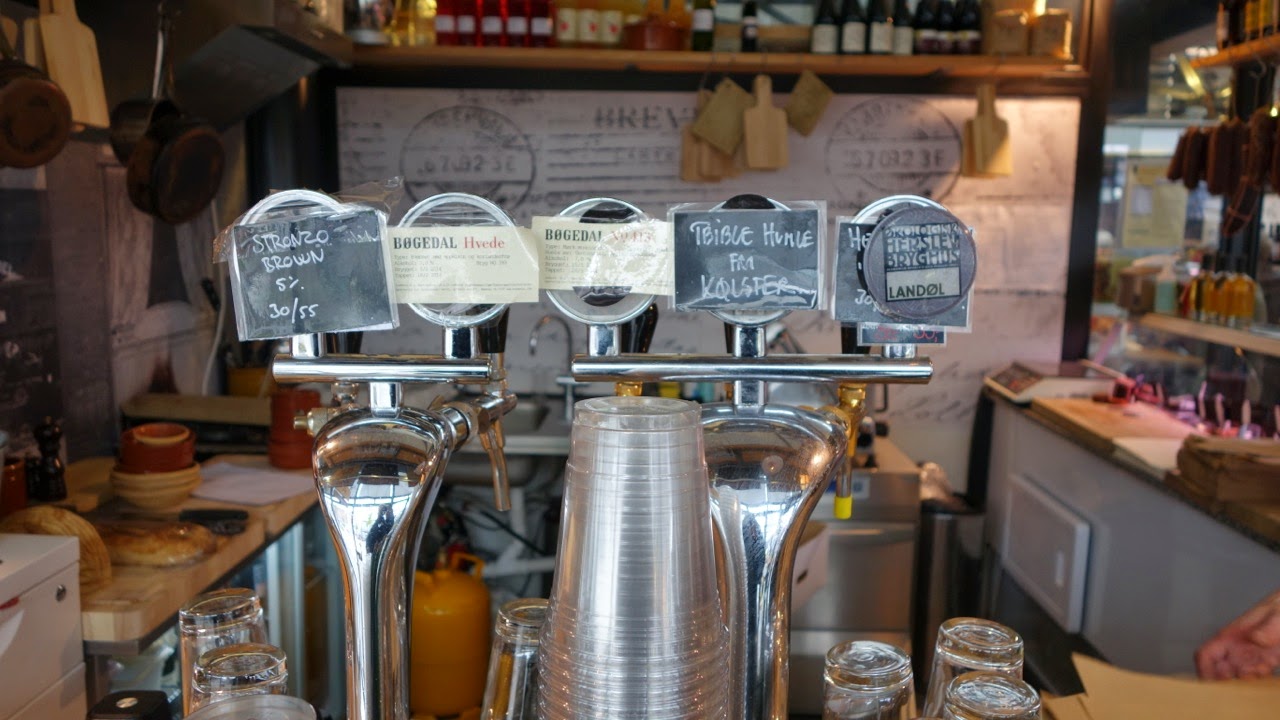 Since it was still officially morning, I started easy with the 4% Landøl from Herslev Bryghus. A nice pale ale, very drinkable. 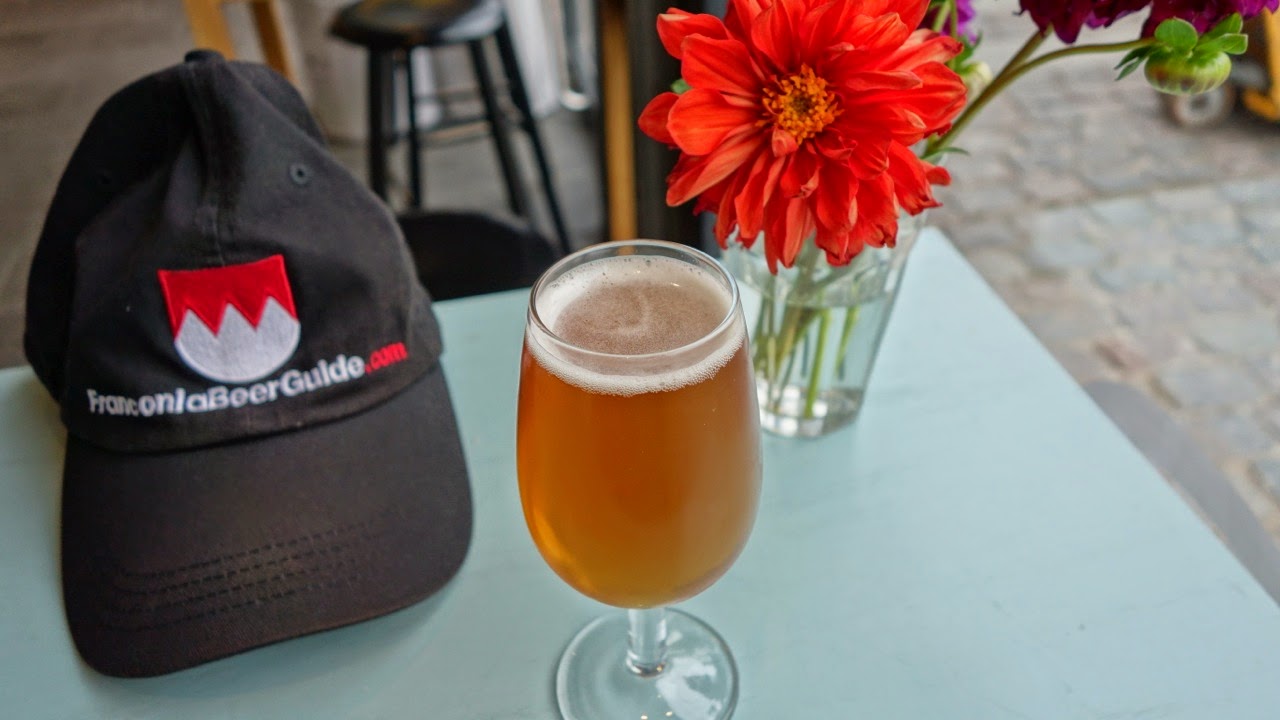 They sell lots of bottles as well. I don't know if these are only to take away or can be consumed on site. I forgot to ask. 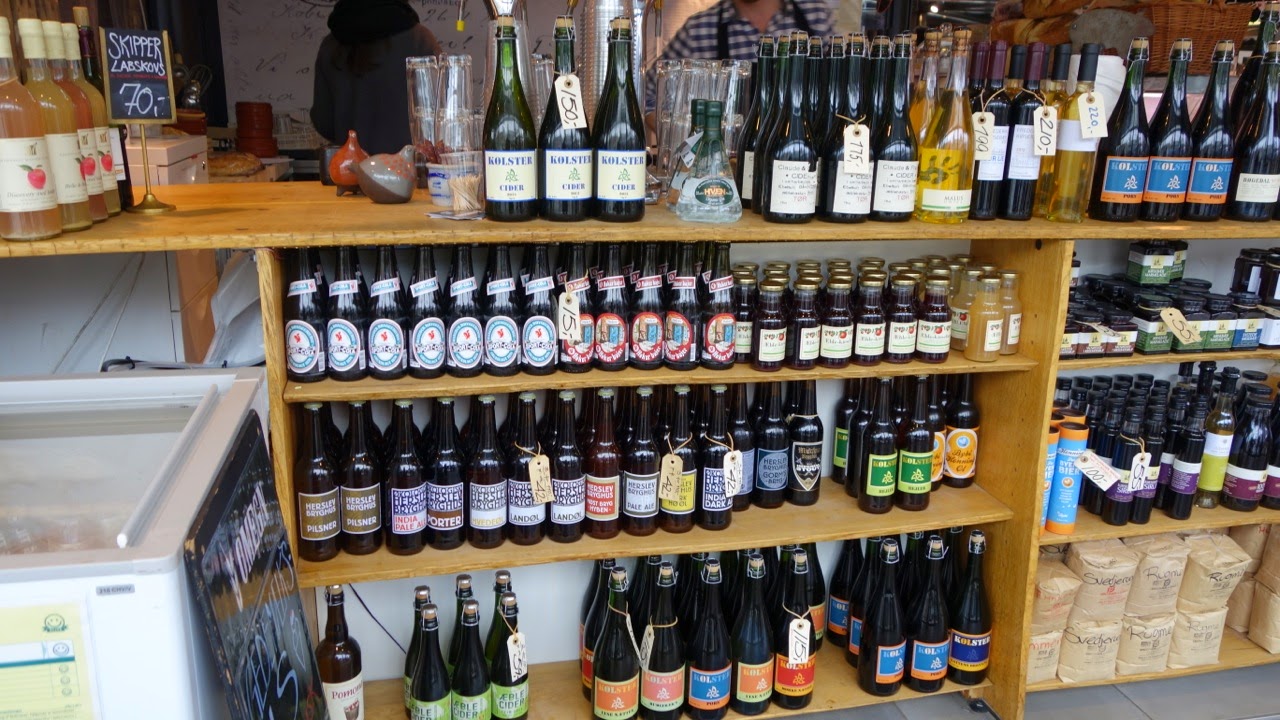 For my second beer I had a Bogedal No. 413. This brewery seems to number rather than name their beers. This one was dark and fairly strong at 7% but hard to classify. Not hoppy enough for a black IPA but not really roasty enough for a porter (or stout). But it was quite tasty and enjoyable. 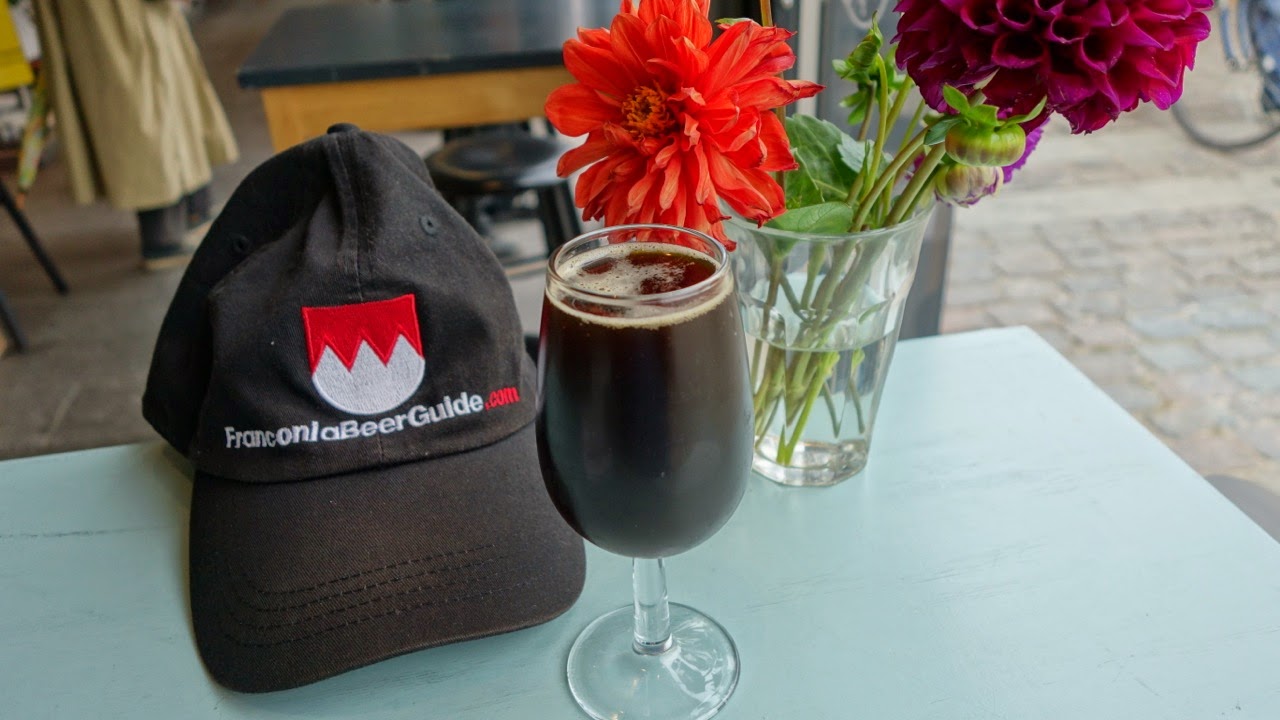 I headed west, past a few places that don't open until last (Copenhagen doesn't have much for early drinkers). Soon I reached Blågårds Plads where on the corner is Cafe Blågårds Apotek. 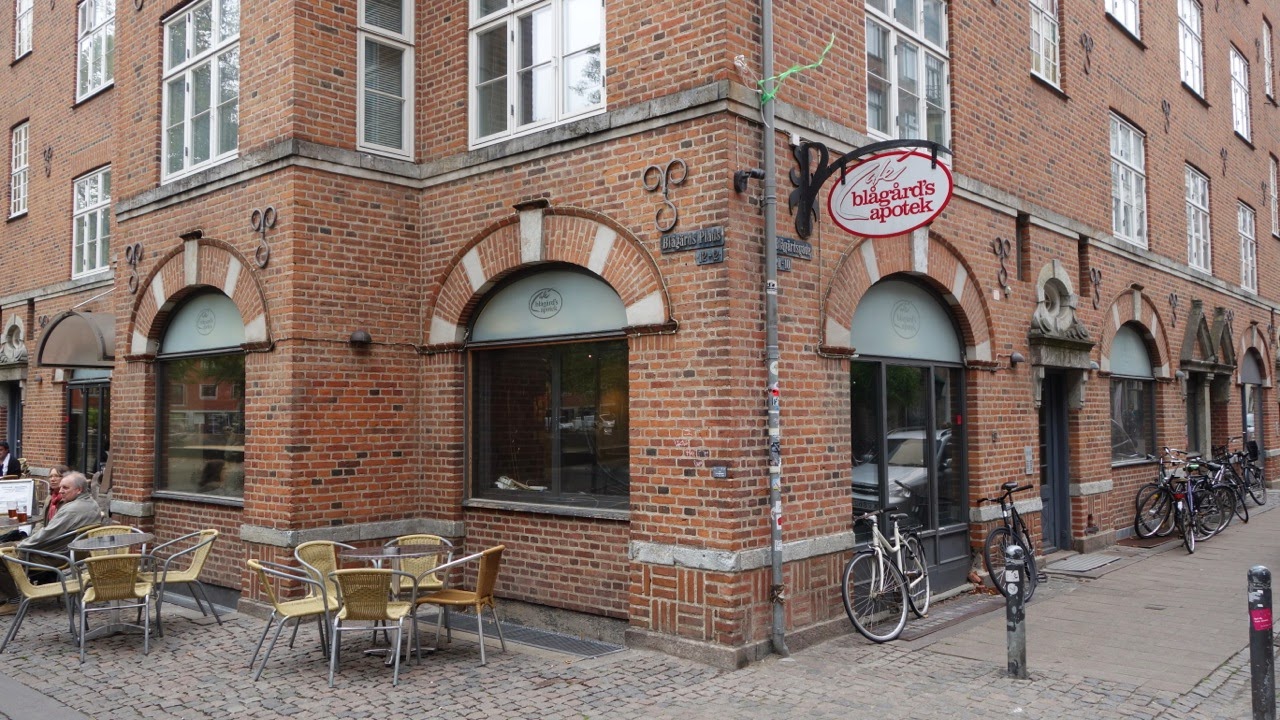 This is a former pharmacy that still has many of the old drawers around for decoration. They have about 16 taps with about half of them Danish beers (the rest German and Belgian) and a good selection of bottles, including many from the US. 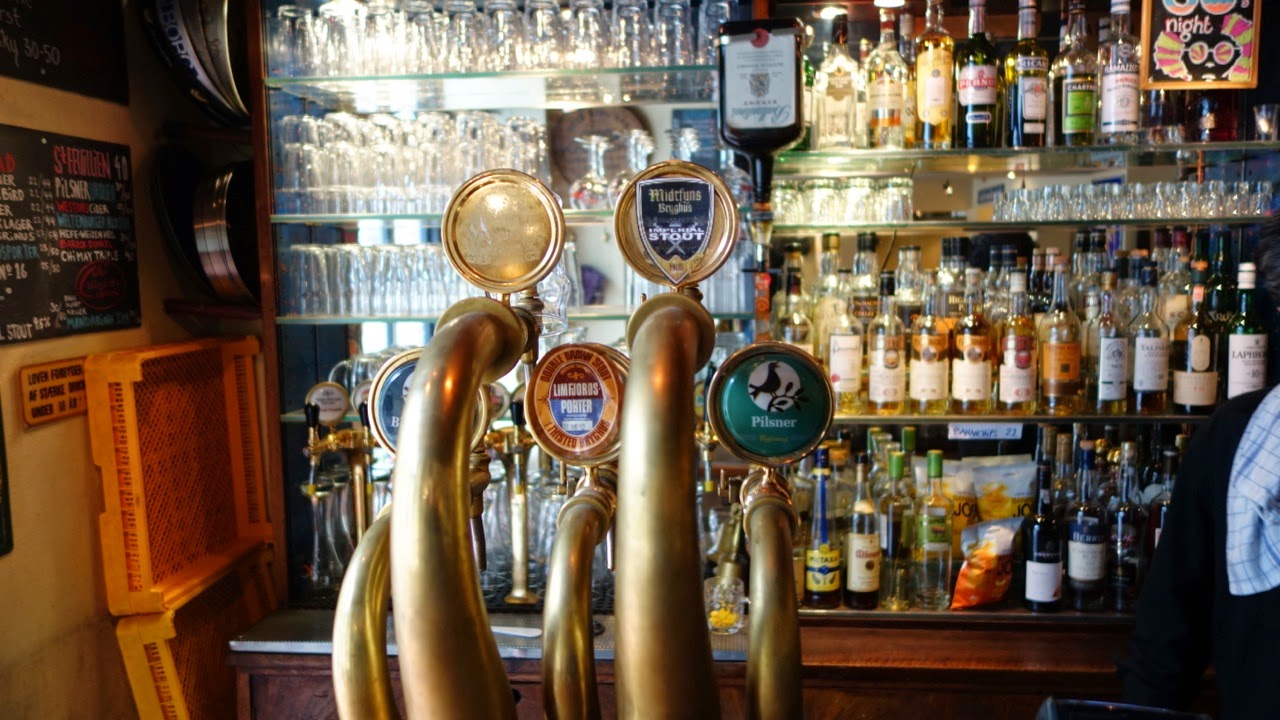 They had the Thisted Limfjords Porter, a beer I remember liking from my last trip, so I started with that. 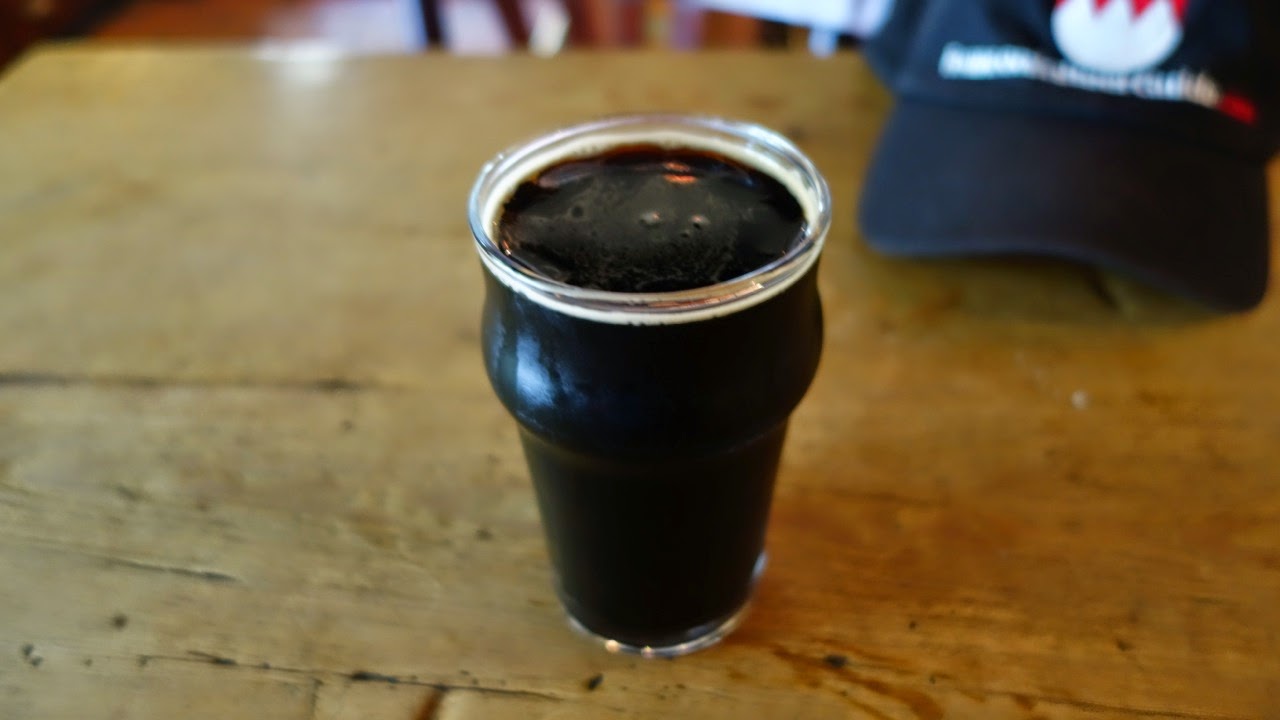 It is a 7.9% Baltic Porter and I think one of the better examples of the style.


Next up was Midtfyns Bryghus Imperial Stout. There was no alcohol percentage on the tap but I'd guess it at least 9%. I read later that it is aged in oak barrels which explains the flavor I could't place. A very nice beer, but maybe too much on an empty stomach. 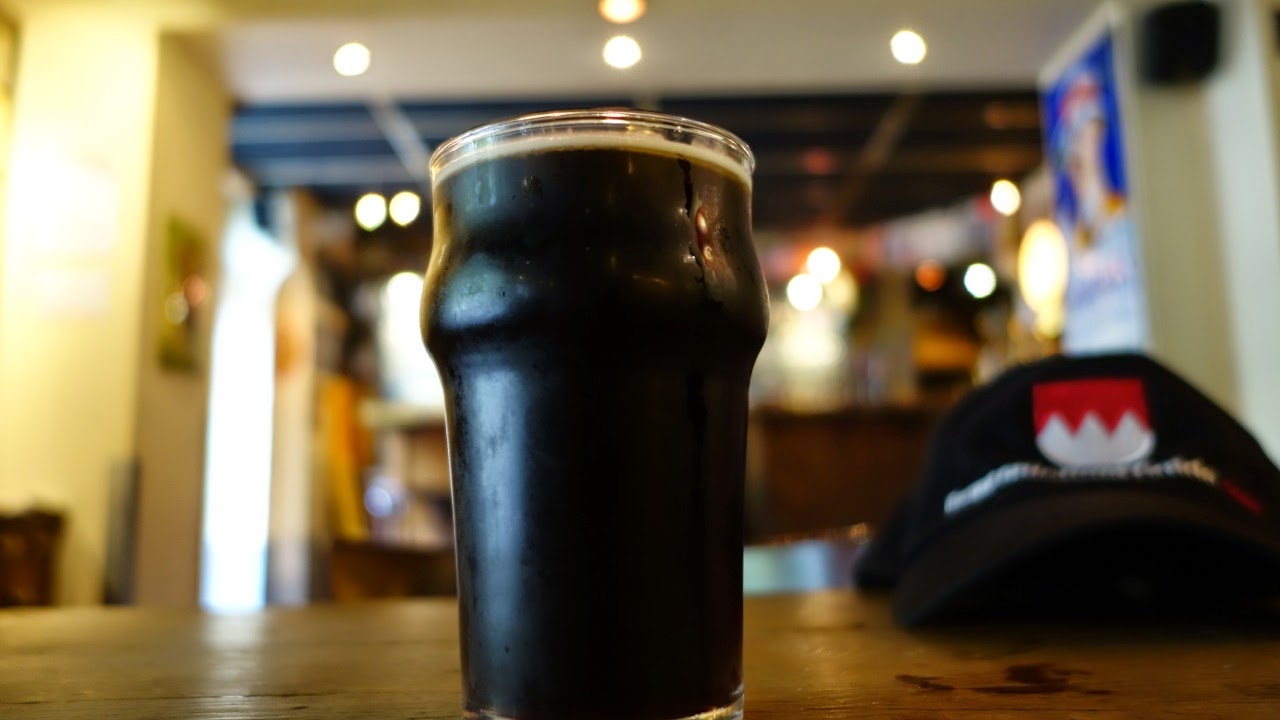 They didn't serve food here so I wandered off to the next place on my list that I knew had food, Cafe Gavlen. 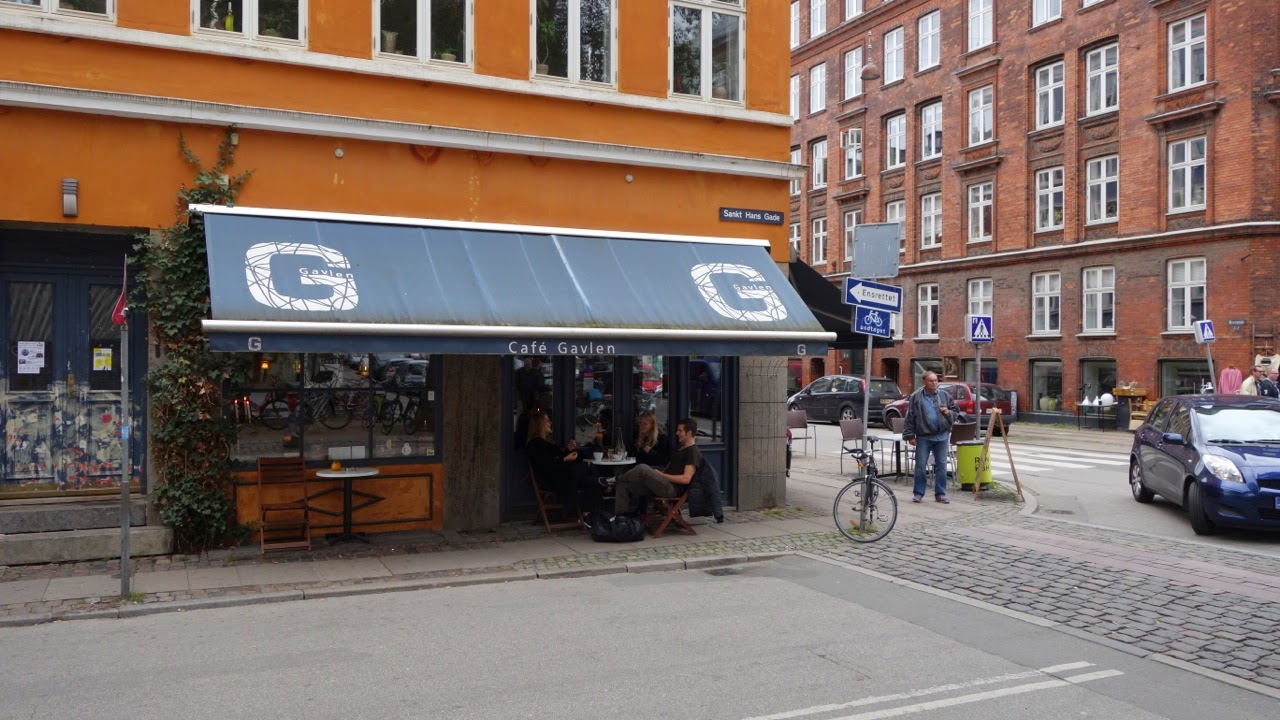 They had seven taps, all with interesting beers, including a house Pilsner (I didn't ask were it was brewed). 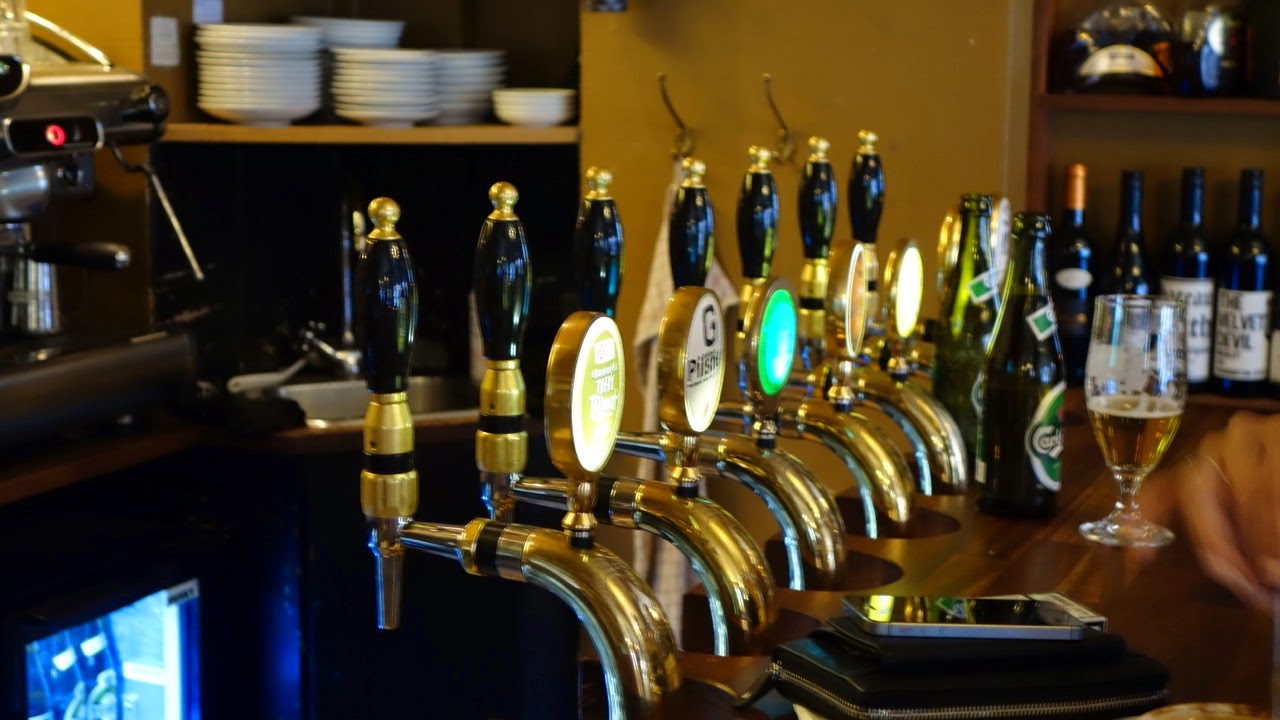 I had an Ugly Duck IPA (yes, that is a Danish brewery) and Fiskfrikadella Smørresbrød (an open faced sandwich on a rich, dark rye bread). 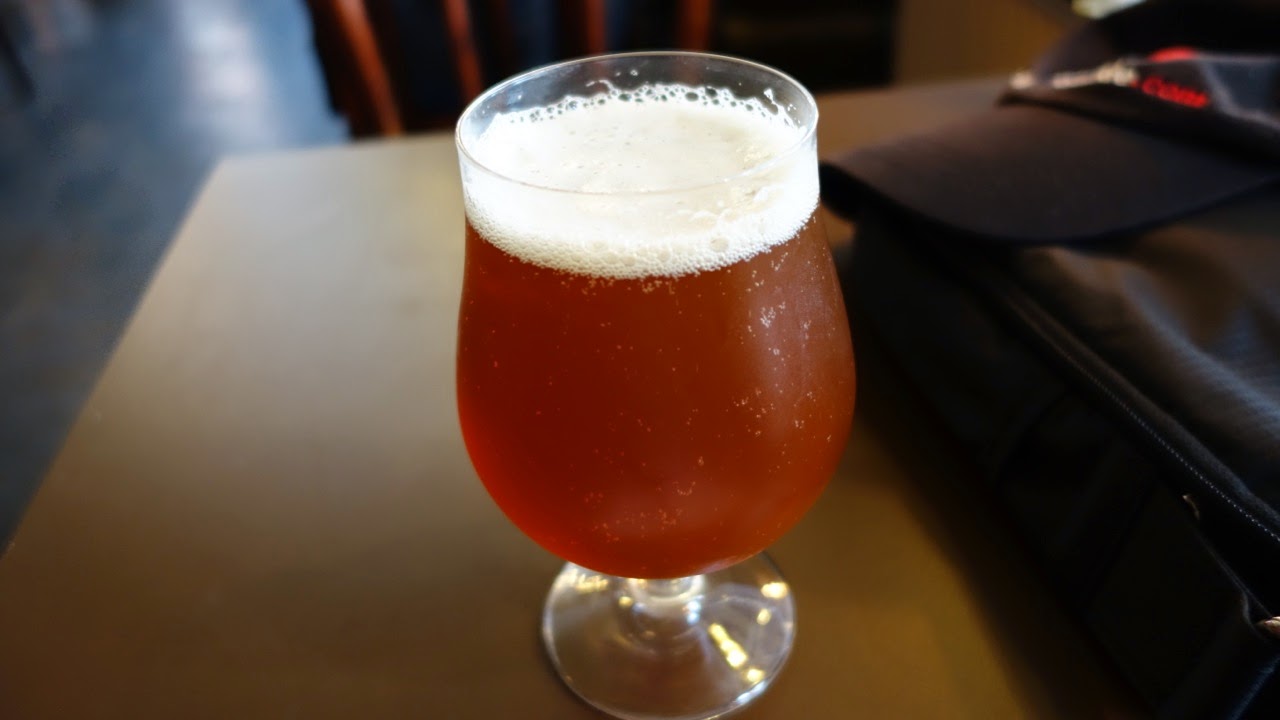 The lack of food and jet lag was catching up to me. I decide to call it an early day, but first I went around the corner where you'll find Nørrebro Bryghus, a very nice brewpub. I peeked in the window at the brewery but didn't order a beer. 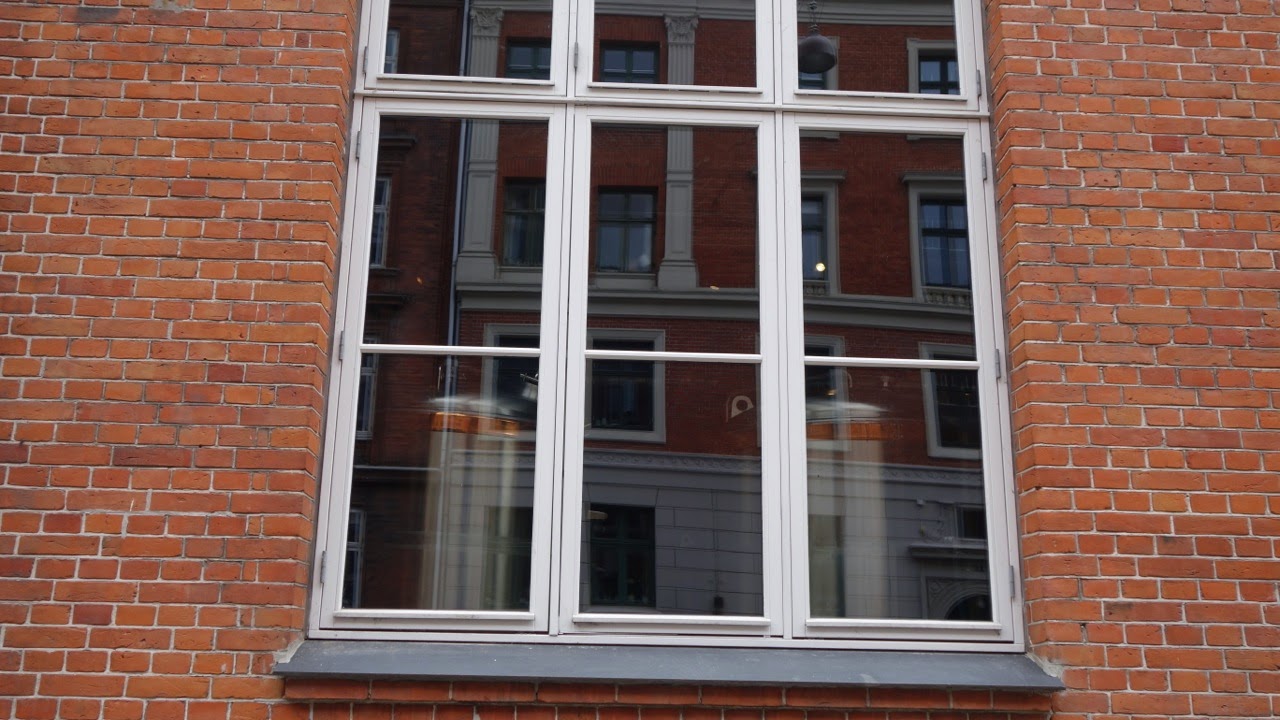 Then it was back to the hotel room for 12 hours of sleep.
Posted by The Mad Brewer at 1:29 AM

Email ThisBlogThis!Share to TwitterShare to FacebookShare to Pinterest
Labels: 2014, Copenhagen