Started off in Ranelagh at the Taphouse for a bowl of soup and a beer. 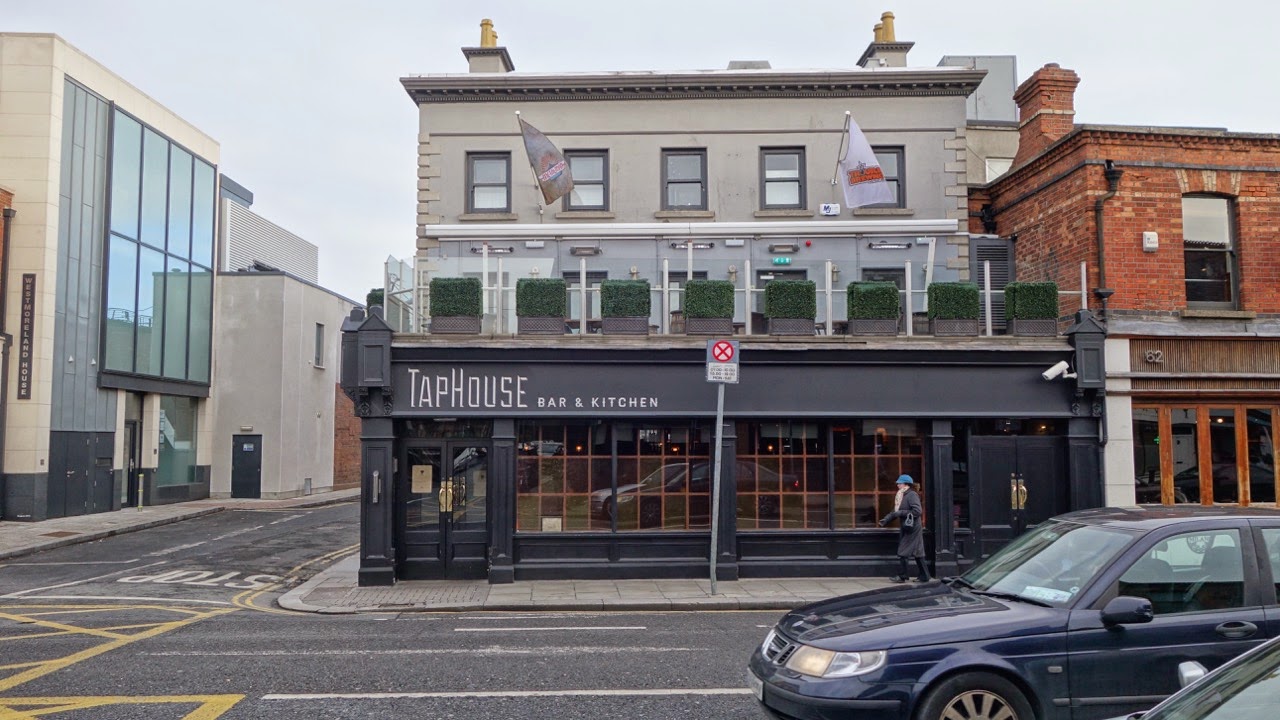 The first beer was Trouble Brewing Sabotage IPA (not a new one for me). A solid Irish IPA, lower in alcohol than a US counterpart but every bit as flavorful. 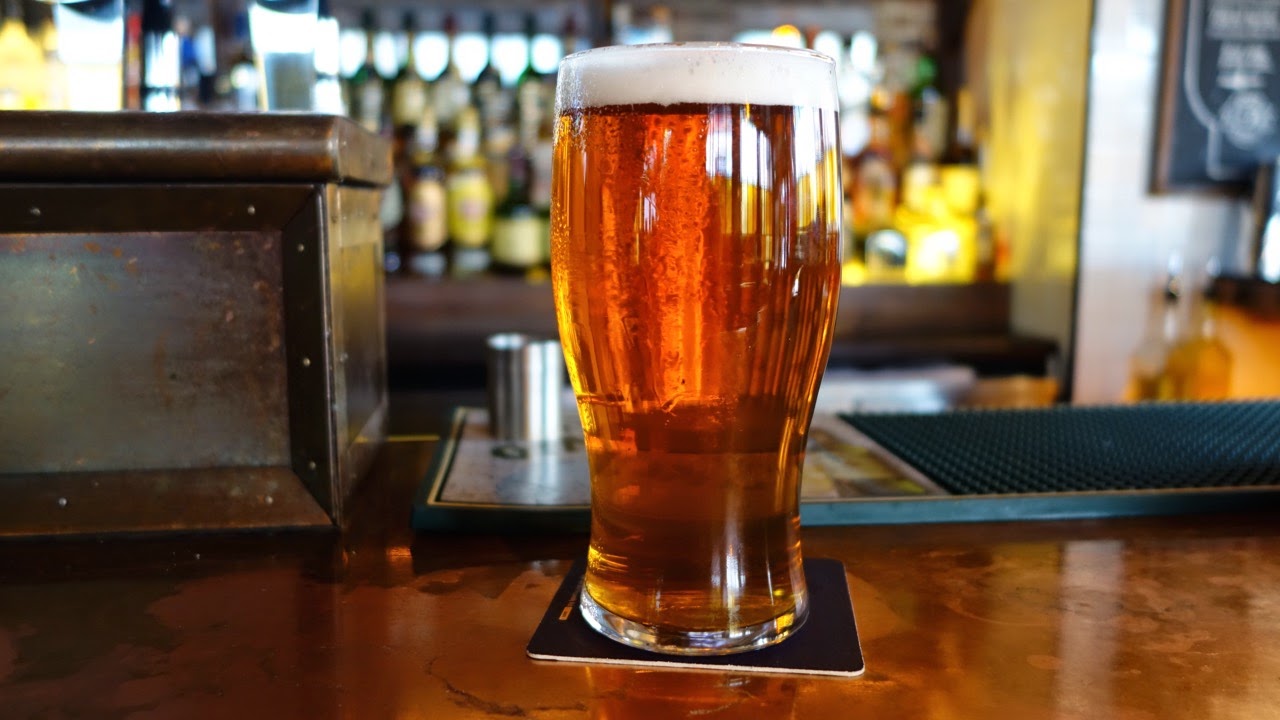 Followed by a Kinnegar Limeburner (new). After the IPA this was little on the bland side but no flaws and would have been a good first beer. 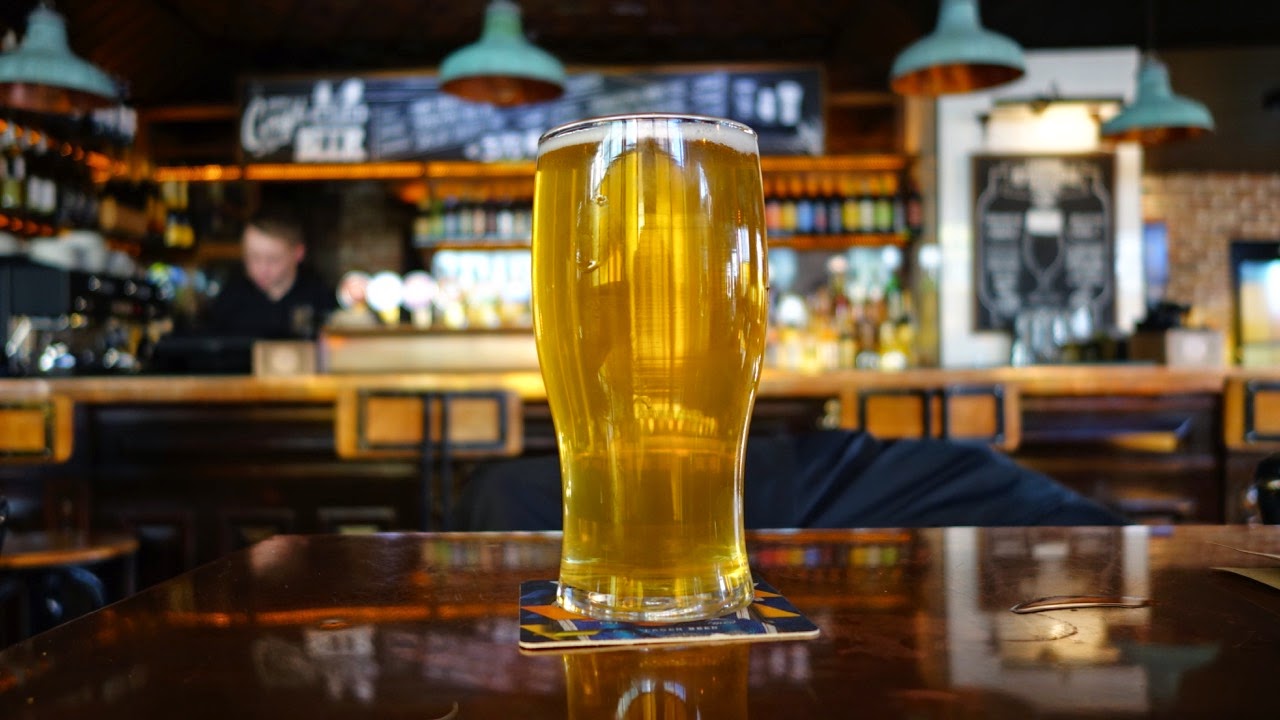 Then it was back on the bus to Alfie Byrnes, the Galway Bay pub in the Dublin Conrad Hotel. I got off the bus and said, "Hmm, which way do I go" then turned around... 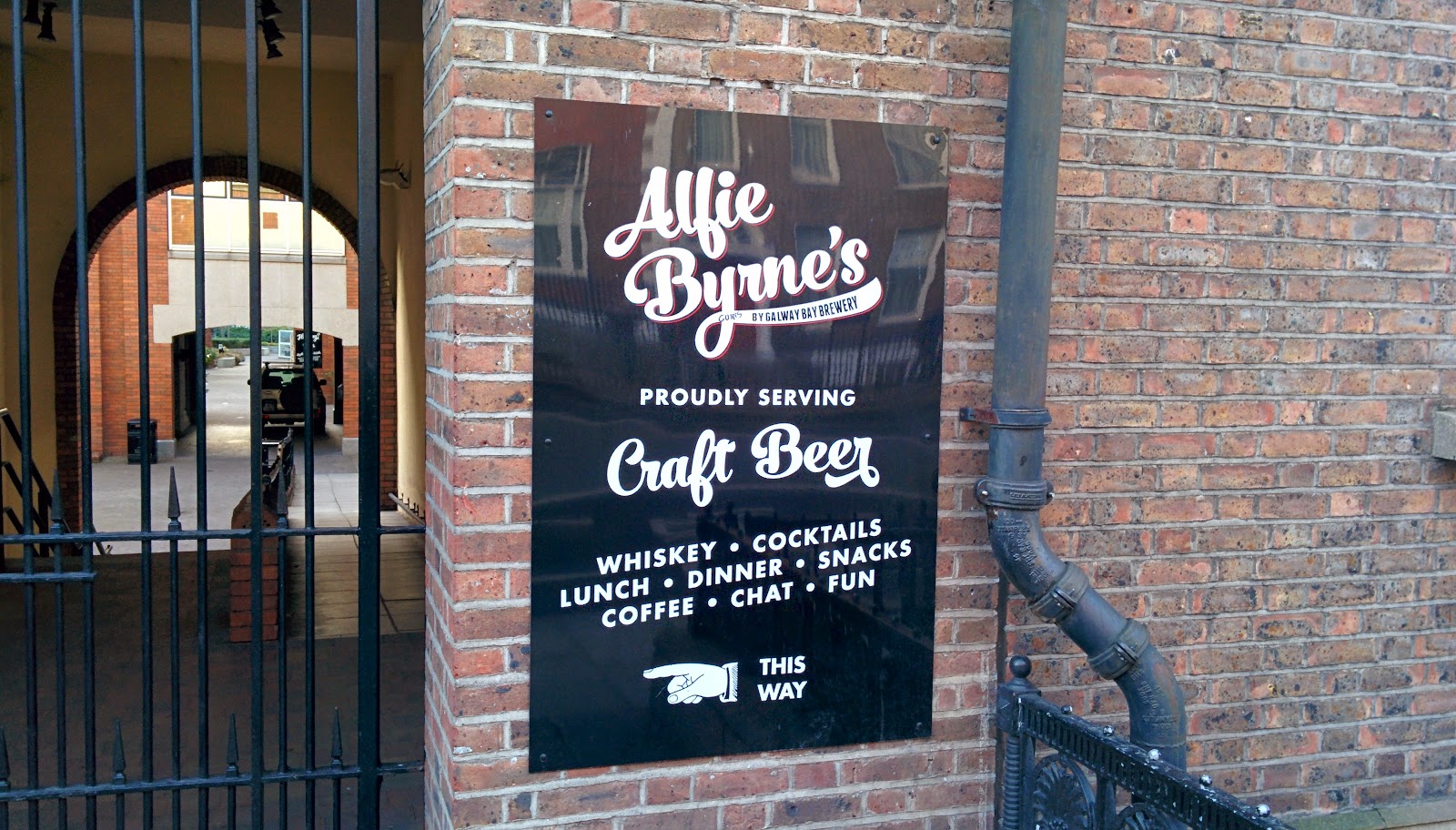 Great marketing. The pub is in the same build as the hotel but has its own entrance by the fountain, down one level. 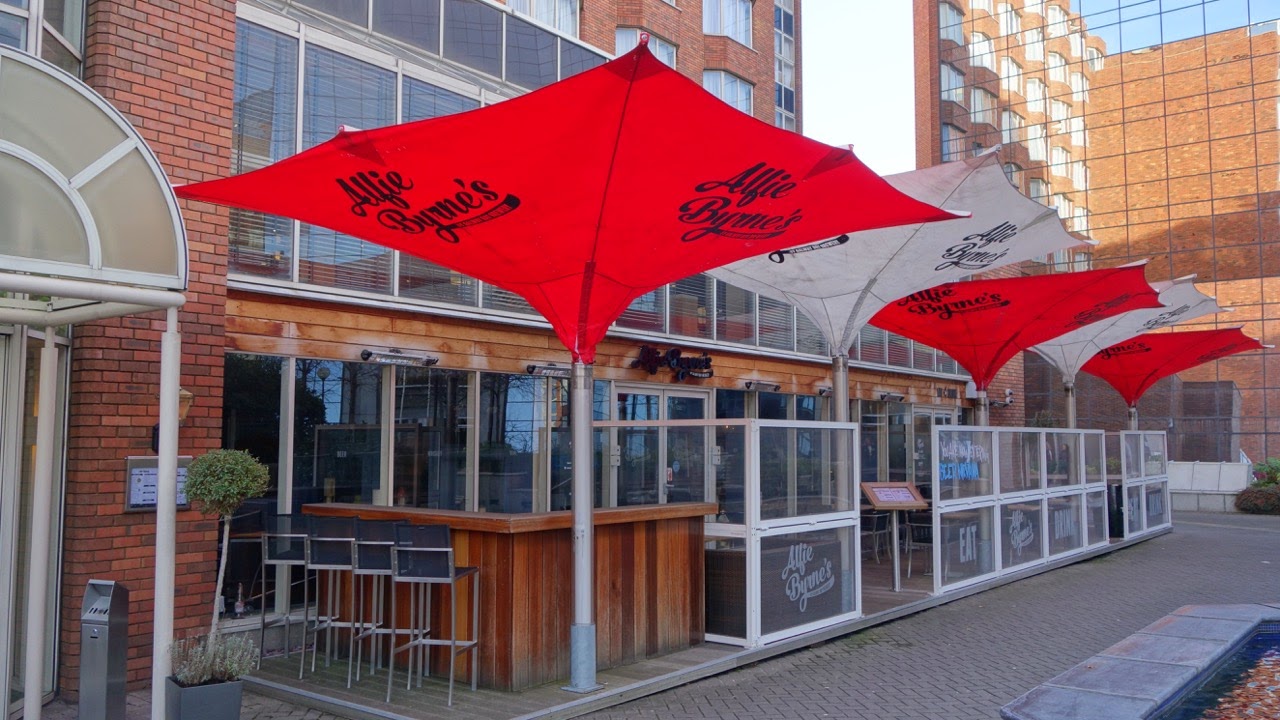 '
As you'd think being in a 5 star hotel, it is a bit fancier than the usual Galway Bay pub but not too fancy. I started off with a Blacks of Kinsale KPA (or Kinsale Pale Ale) Aggressively hopped and quite good. I remember this one from last year (or was it the year before) and I wasn't disappointed. 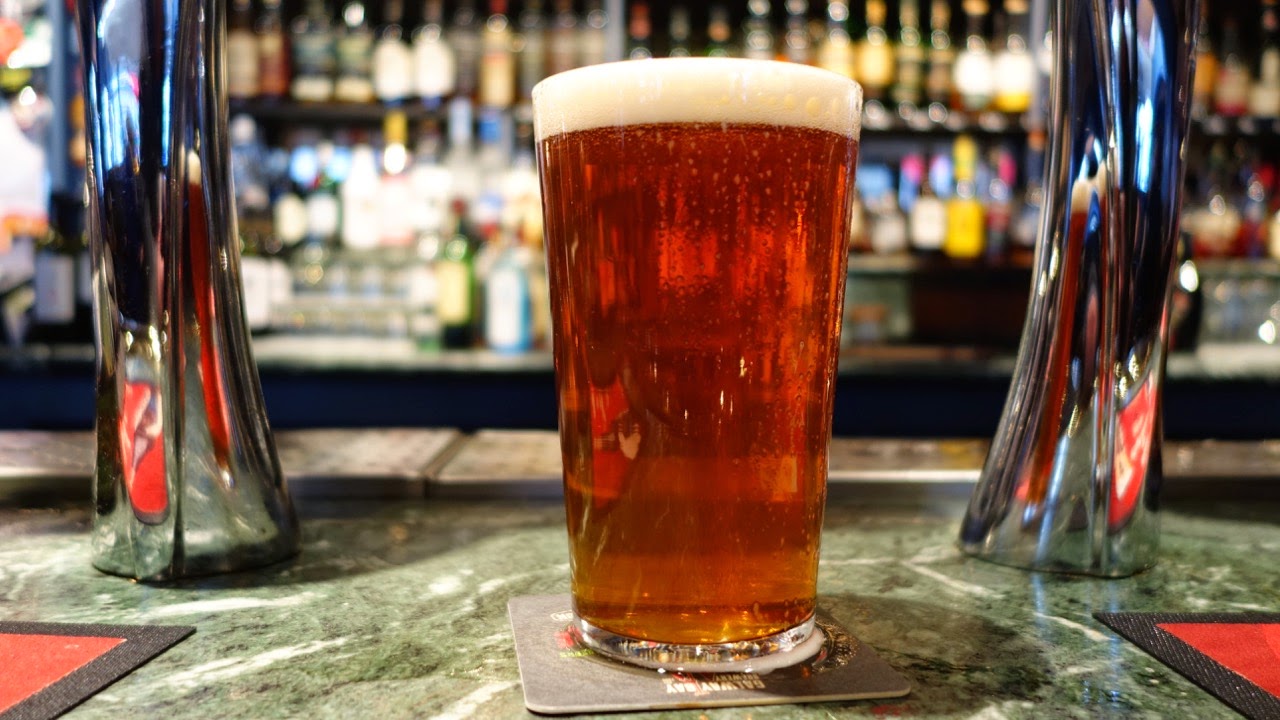 As I write this I realize all three beer I had at Alfies look alike. They were different, though. Next up was a new brewery for me Black Donkey Brewing and the beer, Pilot House Amber Ale. The hops were not a sharp as in the KPA but still a well made, drinkable beer. Looking forward to others from this brewery. 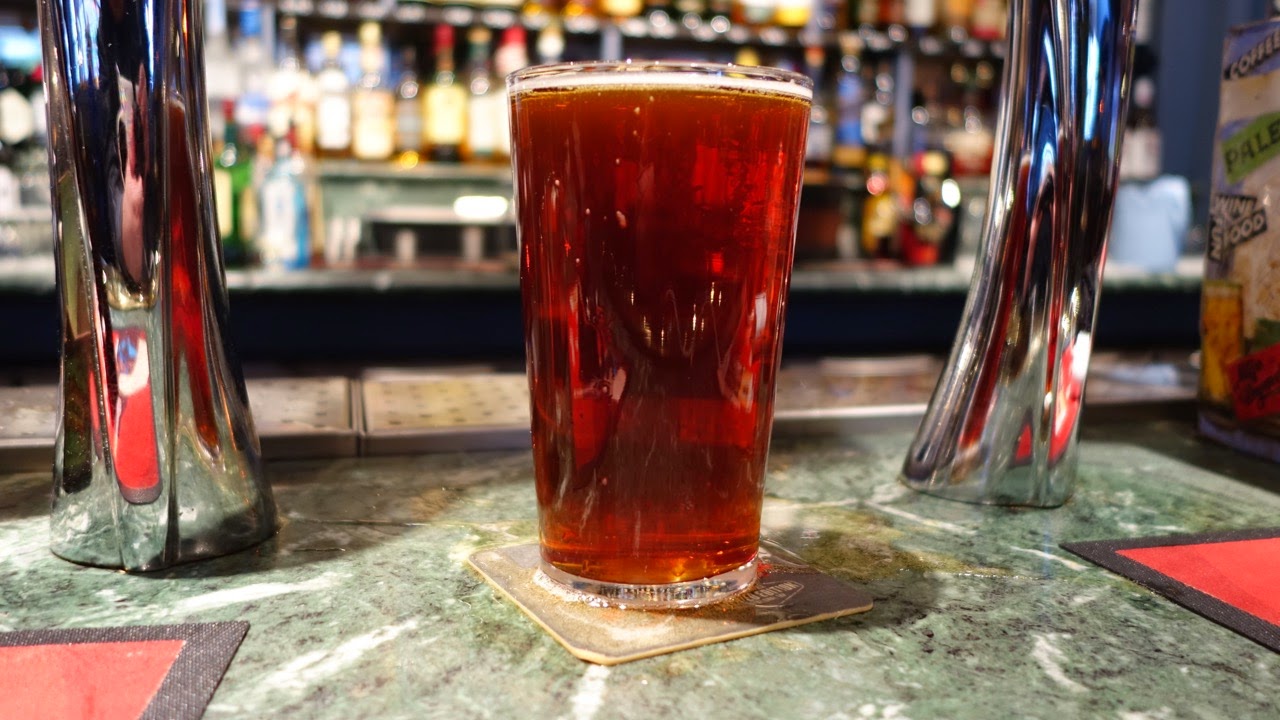 Finally, I had an 8 Degrees Amber Ella. This was fairly new on my last visit and was one of my favorite new beers. Still as great as ever. 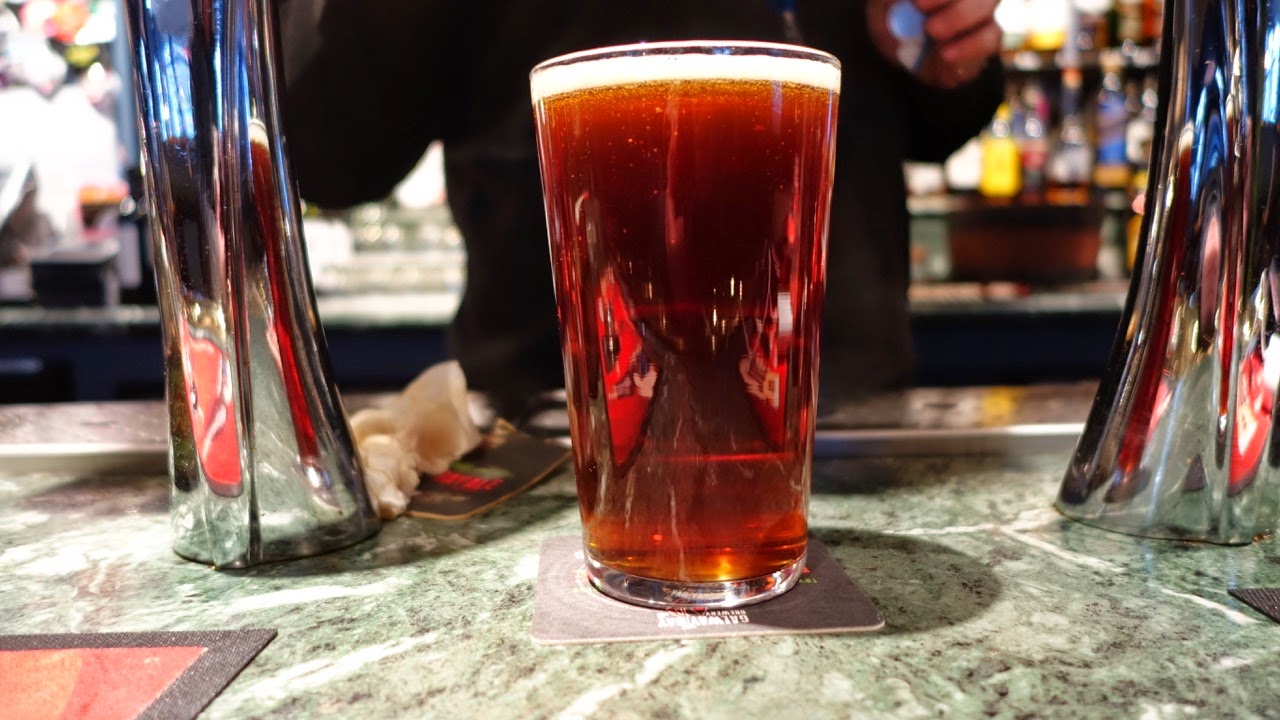 It was starting to think about dinner and wanted to move on. I am writing an Android App version of the www.DublinBeerGuide.com website and one cool feature I've added is click on a bus route and see which other pubs are near that bus. It turns out the 37 bus goes from Alfie Byrnes to L. Mulligan Grocer. It was fate.

So I hopped on the next 37 bus and soon was at LMG. Almost too many beera to choose from 26 taps, and 6 hand pumps. I started with the Brown Paper Bag Project Lupe Garou Fresh Hopped Ale. 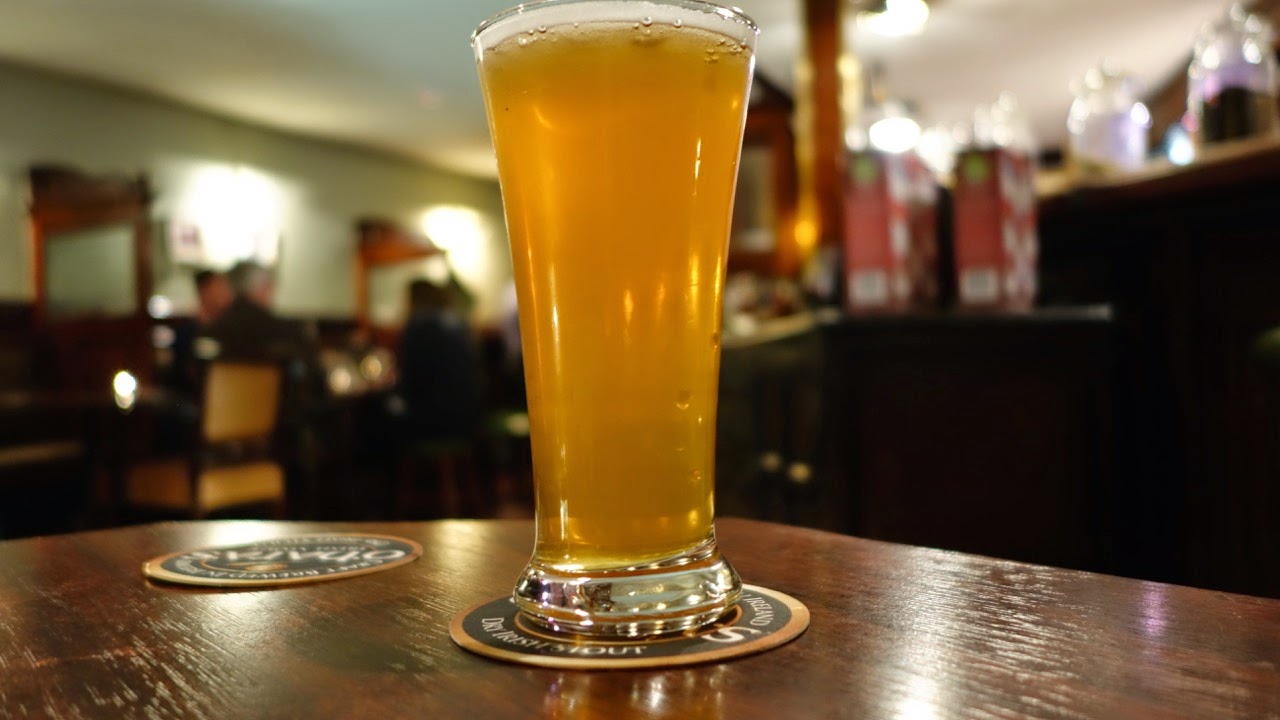 The Brown Paper Bag Project is an endeavor by the people behind L. Mulligan Grocer.  They don't (or at least they didn't) have their own brewery but have come up with some outstanding beers over the years. This one didn't disappoint.

Next up was Wicklow Wolf Brewing Kentucky Common. This is a style I don't think I've seen outside of home-brew competitions (and probably the state of Kentucky) I'm not that familiar with the details but it was a tasty beer. I drink Irish Stouts brewed in the US so why not a Kentucky Common brewed in Ireland? 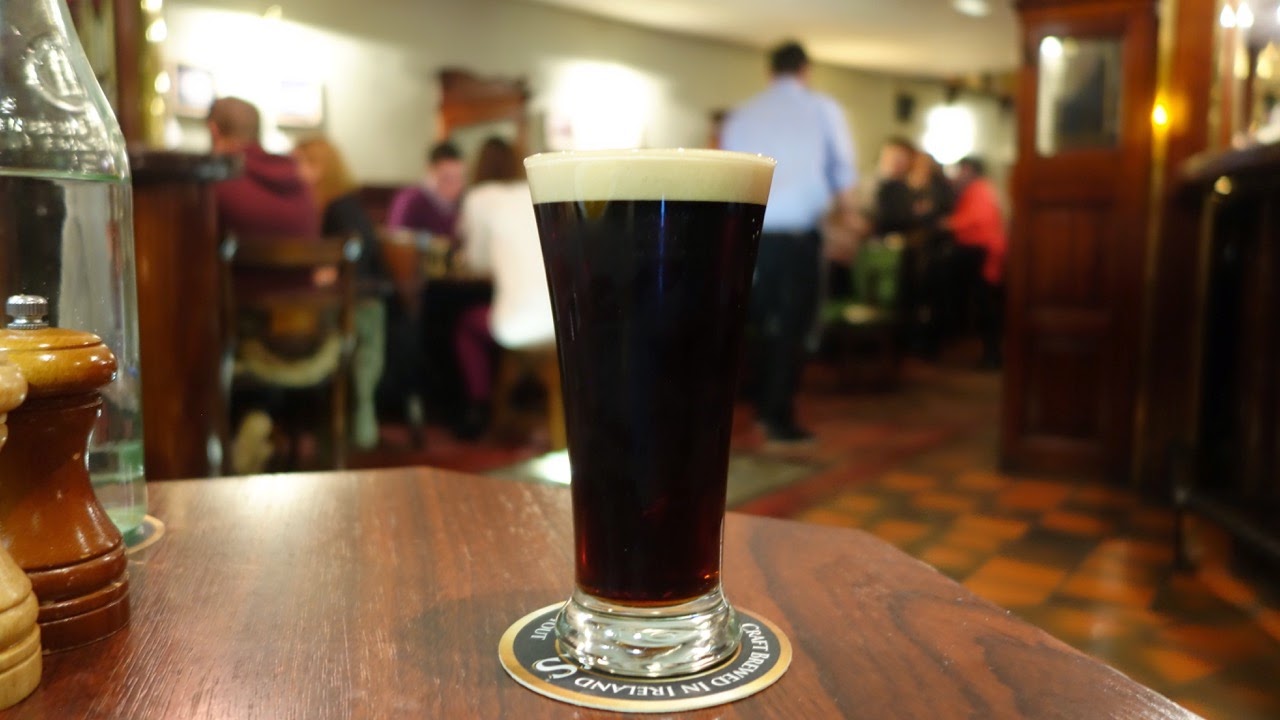 With my herb crusted haddock I had a White Gypsy Emerald. I don't think I've had this one before and it went very well with the fish. 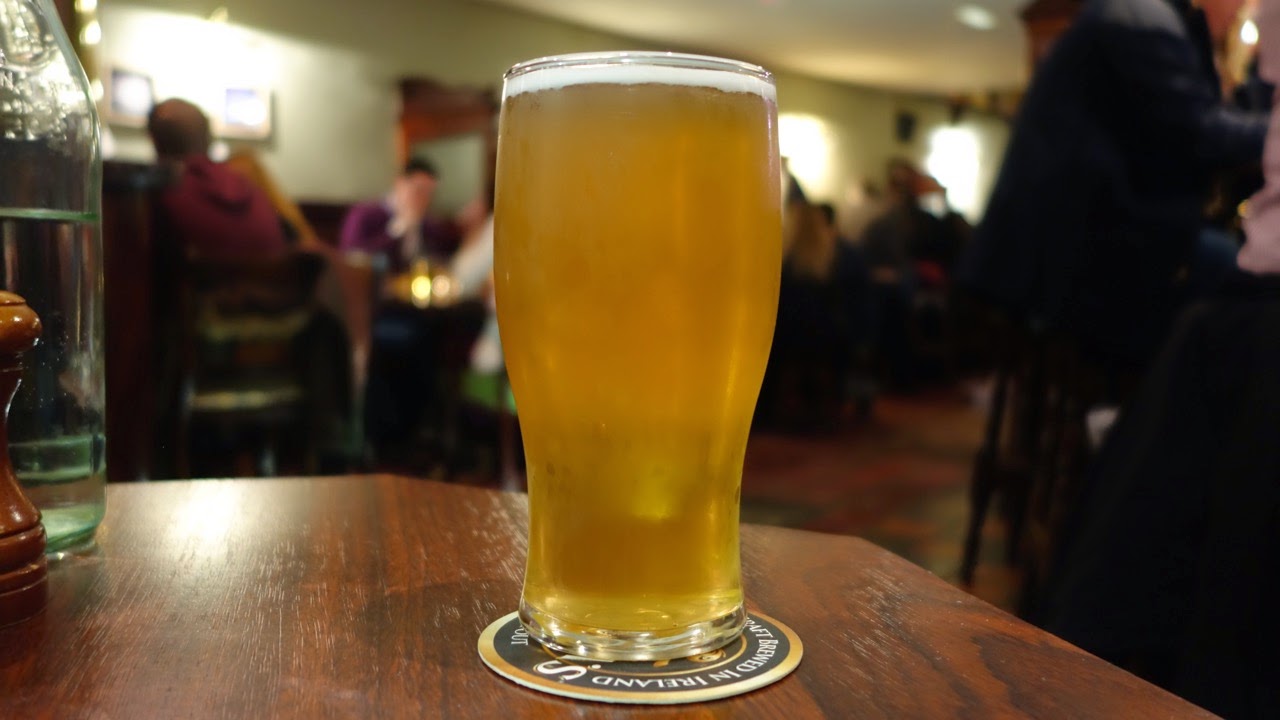 Next I strayed from he straight and narrow and ordered a non-Irish beer -- an IPA from the Italian brewery Birra Del Borgo. A friend from London had just spent a week in Rome drinking Italian beers and I ordered this is solidarity. It had a bit different yeast characteristic but was good. We don't get too many craft Italian beers in Los Angeles, so I'm happy to try them when I can. I hear an Italian only pub will be opening in London soon -- looking forward to that on my next visit there. 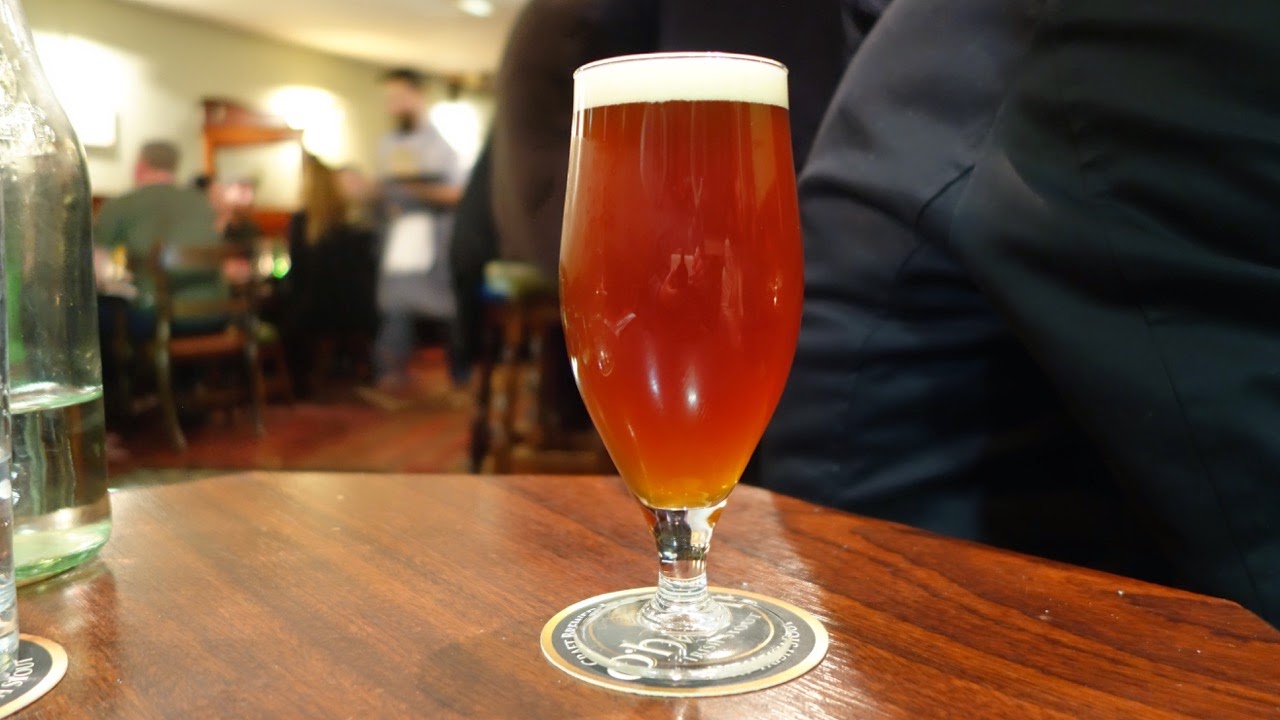 Time to start winding down. There was a Trouble Brewing Chocolate Cherry Stout on one of the hand pumps so I took a gamble -- sometimes they can be too candy-like -- I like my beers to taste like beer, 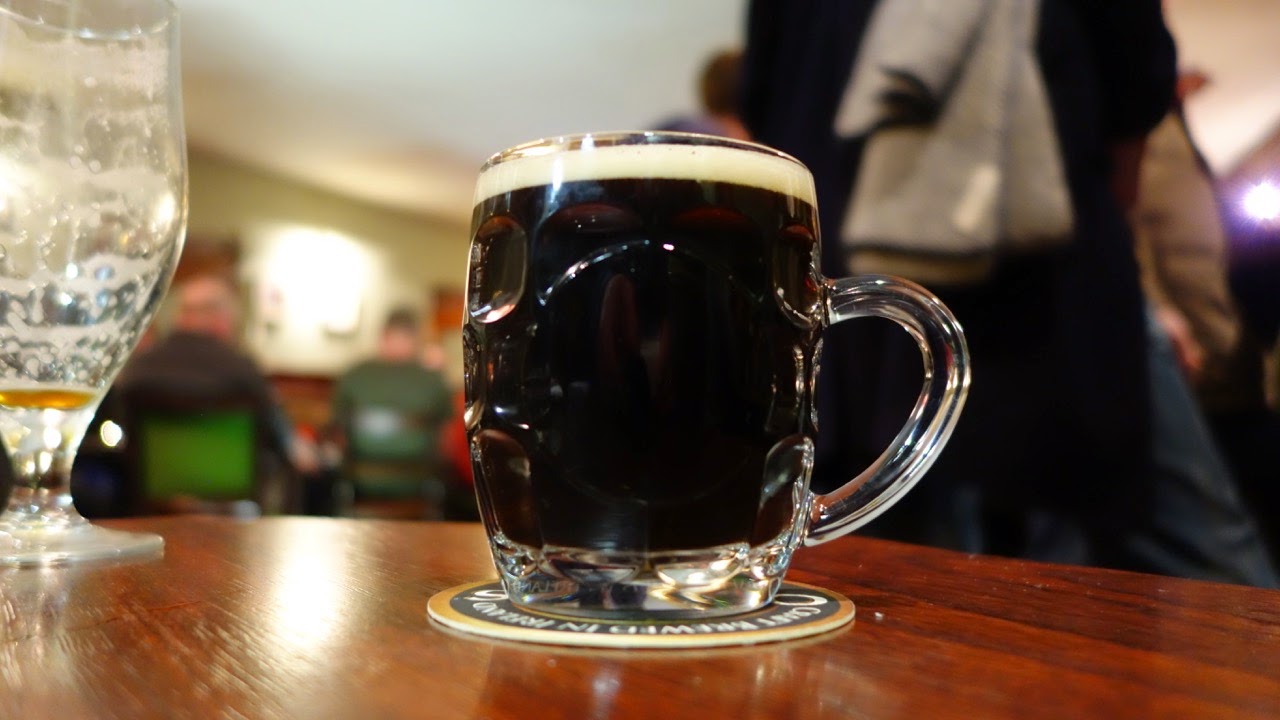 This one hit the right balance, the cherry and chocolate were there but it still was a stout. Good job!

For the final beer chose the Dungarvan Coffee Oatmeal Stout, also on cask. I guess it's more a breakfast beer but it was a nice finisher. Strong but not overpowering coffee notes. 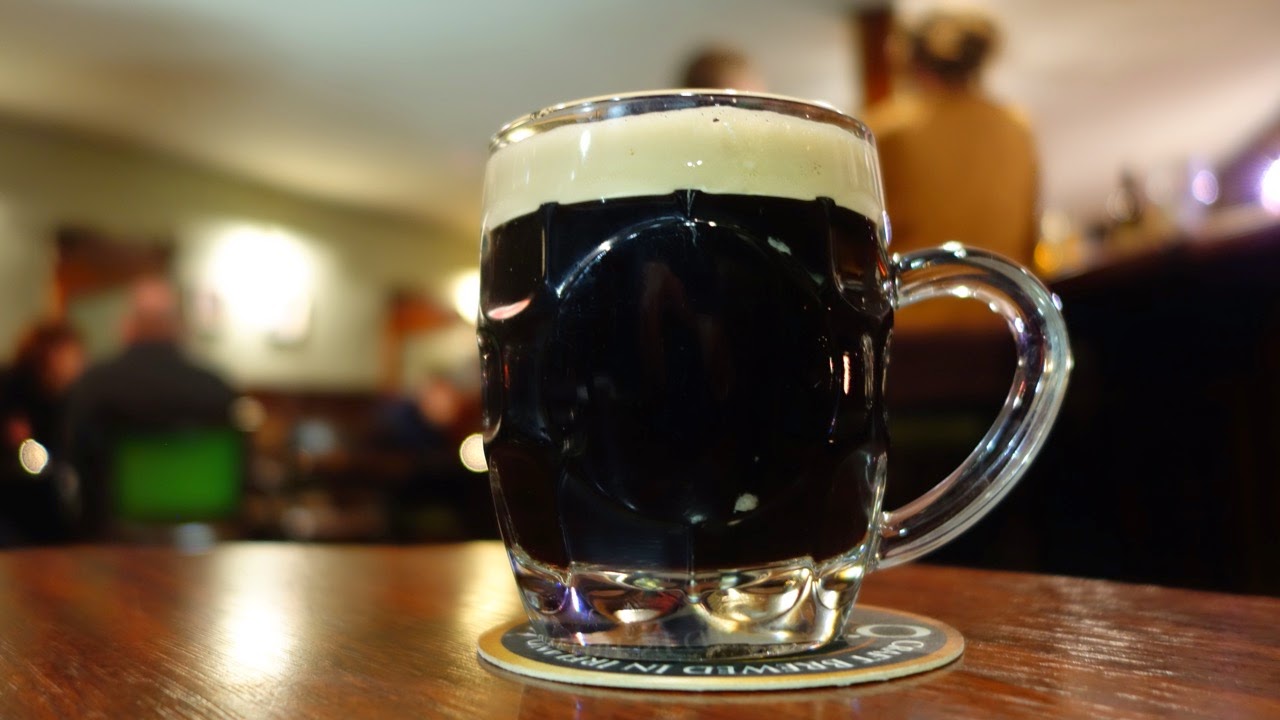 Then it was off to catch the bus back to my hotel. I am getting to know the bus system but I don't always get the right stop. This time I went one too far and ended up walking by another place on my list, Cassidy's. 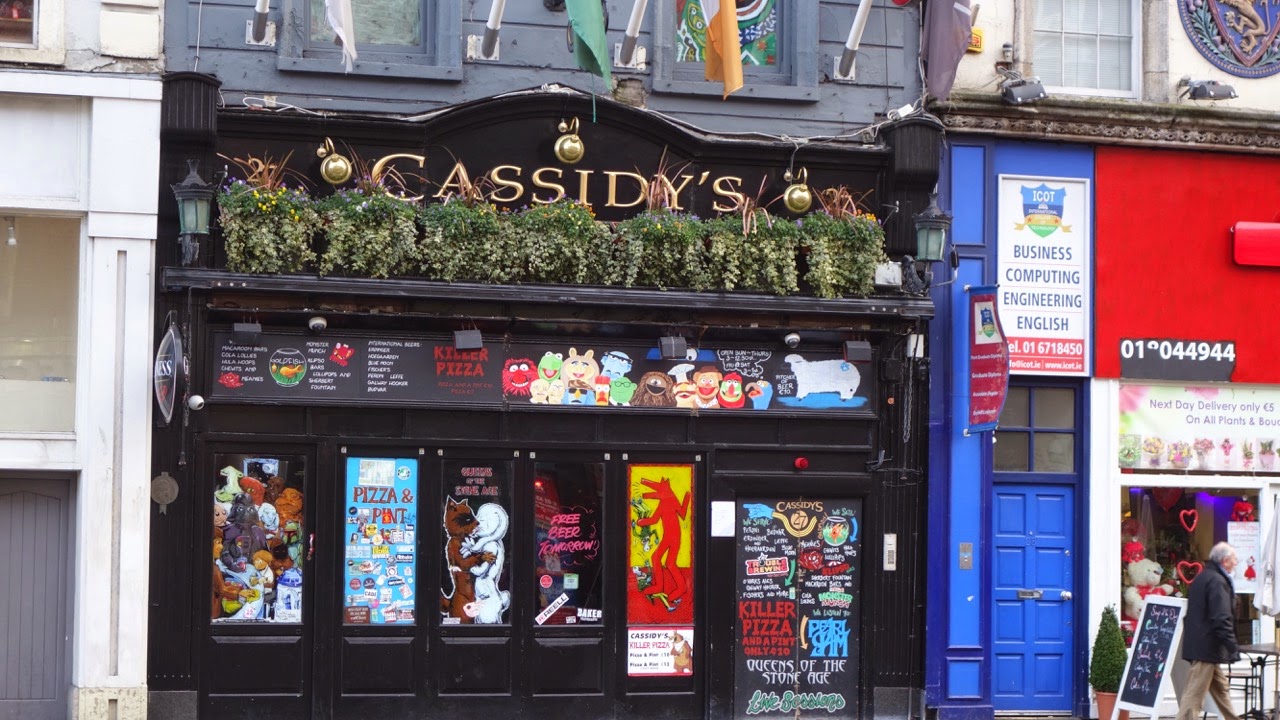 This is a sister pub to P.Macs and Blackbird. The above picture was taken when they were closed but at 10pm on a Saturday night they were hopping. I went in to check out their beers and ordered a Trouble Brewing VietNow IPA. I understand this was a beer brewed for them by Trouble and it was a quite nice IPA but at this point I couldn't really tell you how it was different than the Sabotage I started the day with. In any case, I quickly drank it and left -- I'm sure if I was 20 or 30 years younger I would have loved the place, but the crowd and the loud music were just too much for this old fart.
Posted by The Mad Brewer at 5:16 AM

Email ThisBlogThis!Share to TwitterShare to FacebookShare to Pinterest
Labels: 2015, Dublin

First I have to say I love your beer photos. I'm not sure if you carry a camera or use you phones camera, but nice shots. Also, I don't know how you can have that many beers at a time and still function. Cheers!

I use a Sony QX-100 Smart Lens for the pictures. It has some limitations but it is great for beer pictures.

As for the number of beers -- it takes practice :)