The goal today was to fill in some of the gaps in my coverage.
First stop, in the wilds of eastern Vršovice (OK, not that wild, just away from the city center) was Turnovská pivnice 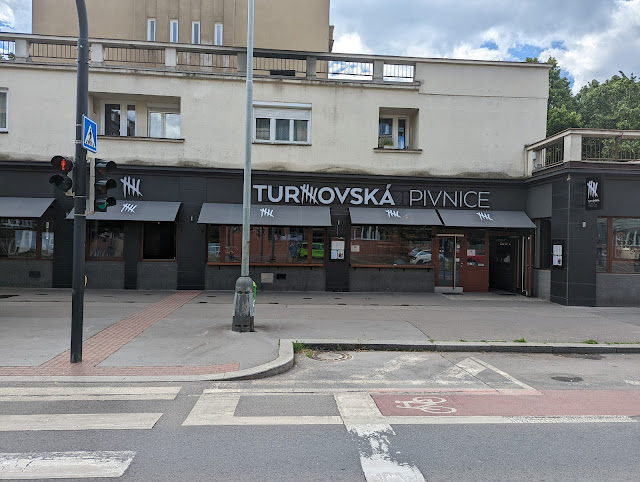 I had expected some sort of storefront taproom but this was a large, well set up restaurant.  They have four different beers on tap (with room for more) 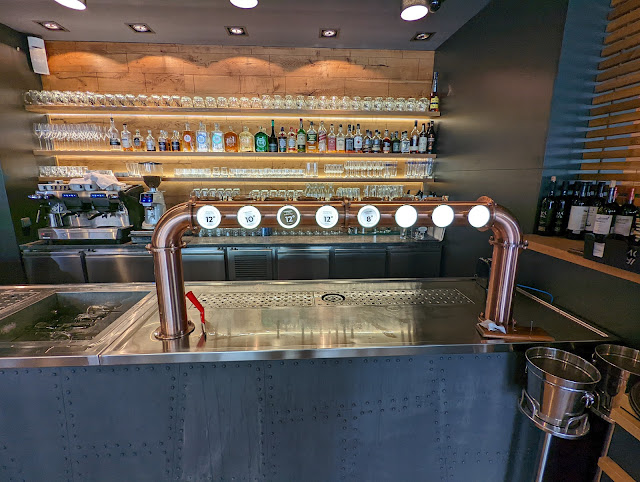 I ordered the Turnov 8º. Since they seemed to have a big lunch crowd, I think this was. smart business move. 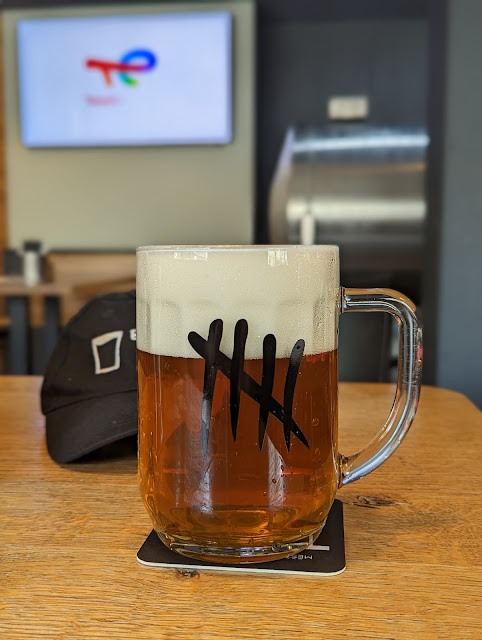 The beer was fine, not the best but far from the worst. They had some lunch specials so I ordered the asparagus soup. The good thing about asparagus soup is that you are reminded you had it for the rest of the day... 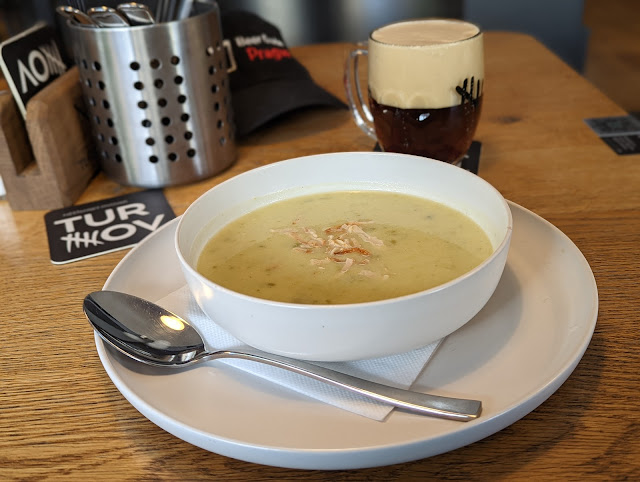 To go with the soup I had their Tmavě 12⁰. I liked it better than the 8º, a little cleaner. It was not at all sweet, which I've found some Czech dark beers to be. 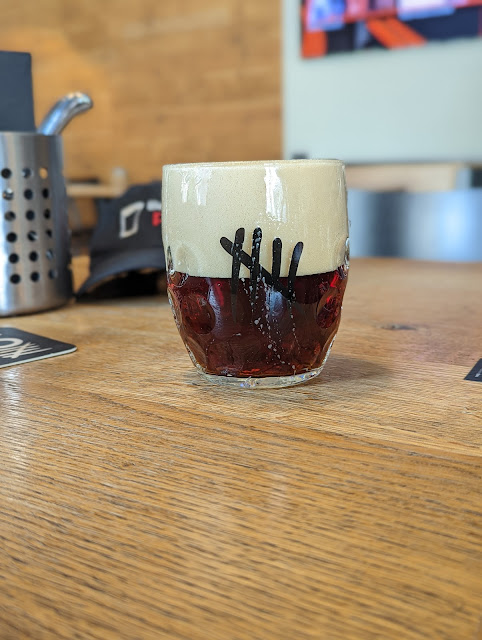 I had ordered some Carpaccio as well, with garlic baguettes and it too was very good. 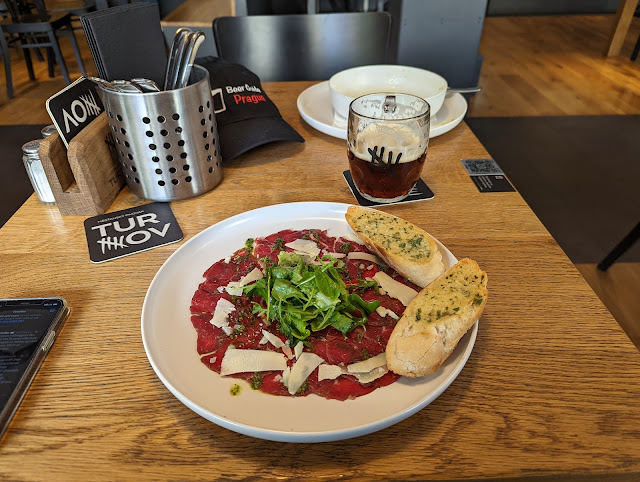 While I was there, a well dressed man came over to my table and said "Are you Fred?" I said I was and it turns out we follow each other on Twitter and he had a business lunch scheduled here and saw my post. We chatted for a minute and then his colleague arrived. The beer would is indeed small.
I caught another tram and soon was at Želva Beers & Burgers. 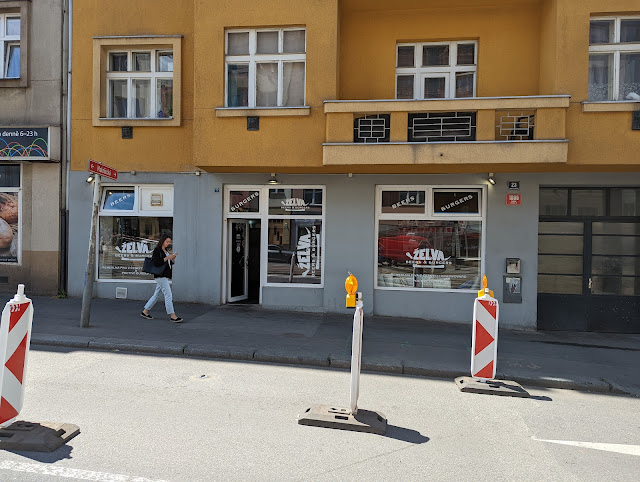 I was a little unsure of this place but they served beers from Pivovar Starokladno which some had recommended. 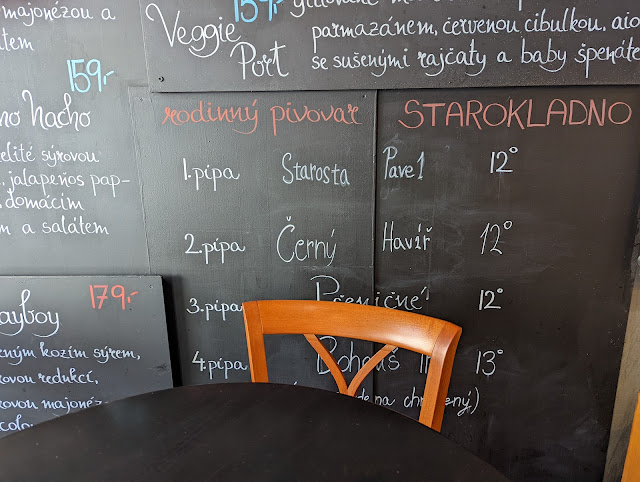 I ordered the Starosta Pavel 12⁰. It was little on the buttery side for me, but otherwise fine. One of the people who mentioned Starokladno does tend to like his beers to be a but buttery. 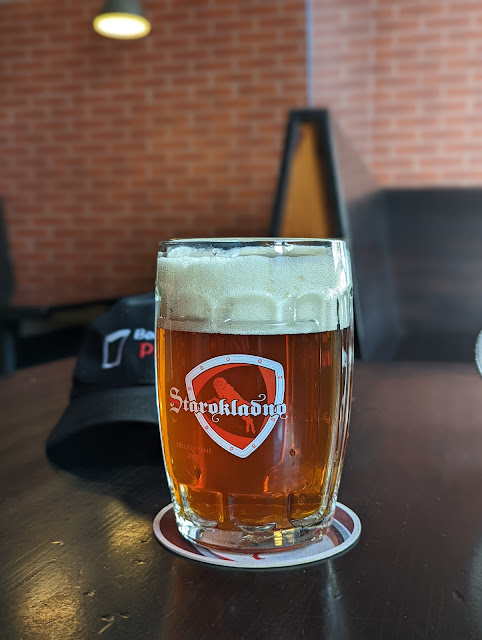 I realized the polotmavý was 18º -- glad I didn't order that. 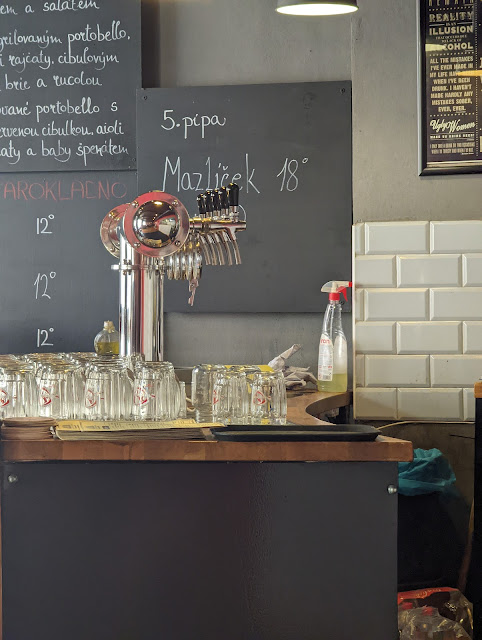 I didn't eat but there was a steady stream of burgers passing in front of me. They looked and smelled good. If you don't mind a little diacetyl and want to try beers from a different brewery, it is not bad choice.

There were a few places I wanted to check out in Anděl. Neither of then worked out, not an interesting enough beer selection. Nearby by was Beertime. (or Beertime.pub after their URL) 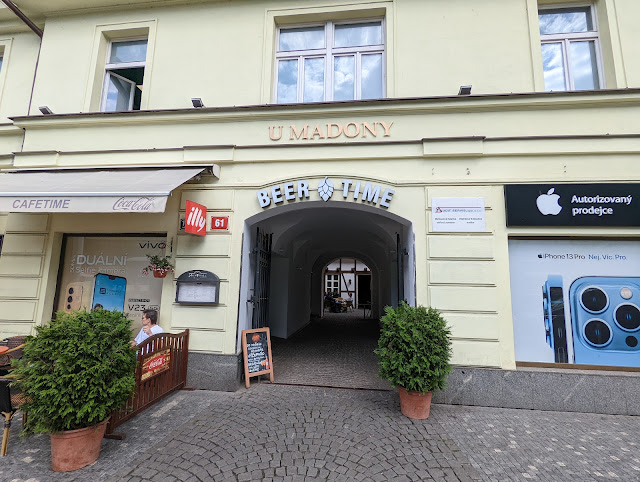 As I've grown used to, lots of IPAs and fruity sours but a couple of lagers. 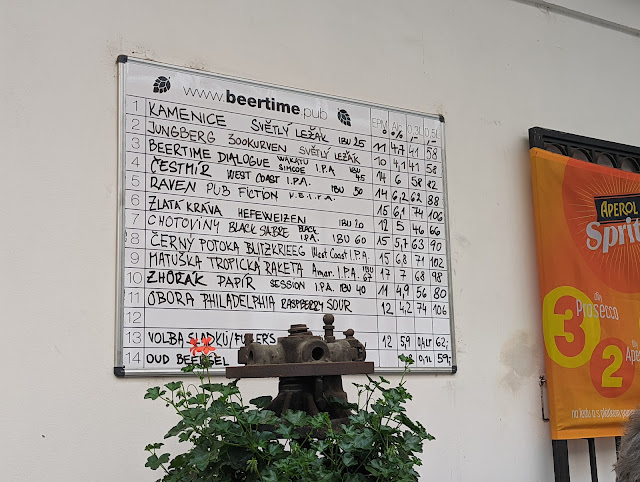 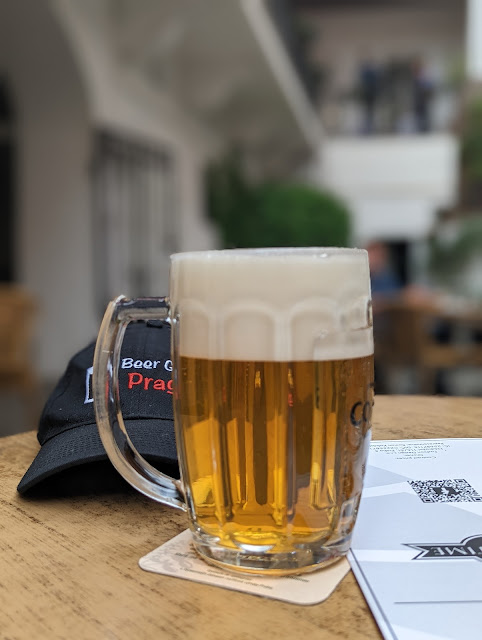 Next it was another tram to Karlín, to check out the new Sedmº (or Sedm Stupnu, "Seven Degrees")
They are a battleshop with 8 taps and a small seating area in the back. 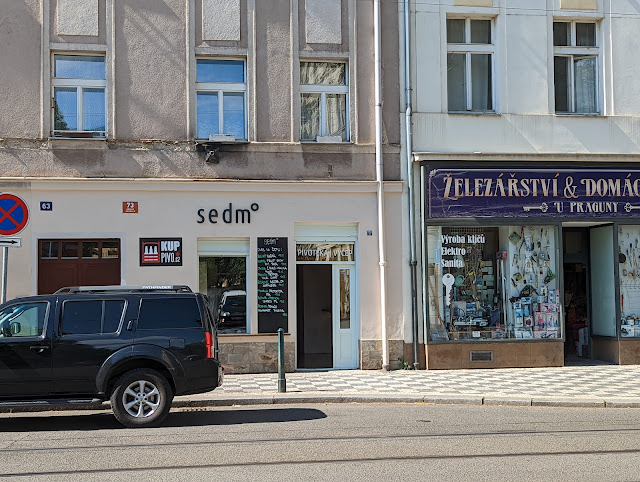 A good selection of beers 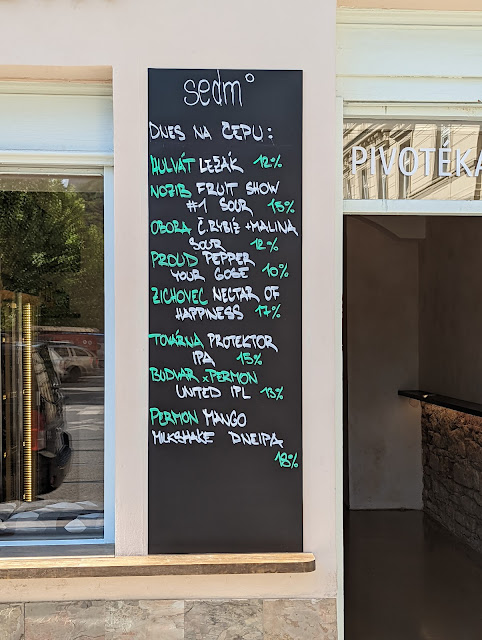 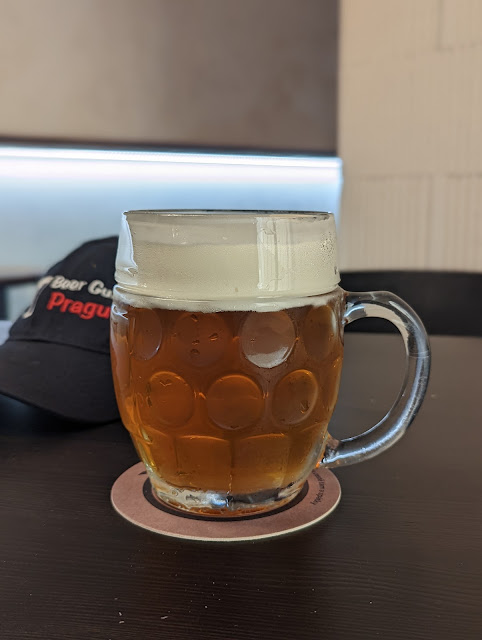 Though it was hard to pass up the Mango Milkshake Double NEIPA...
Int the back is a cold room with bottles. 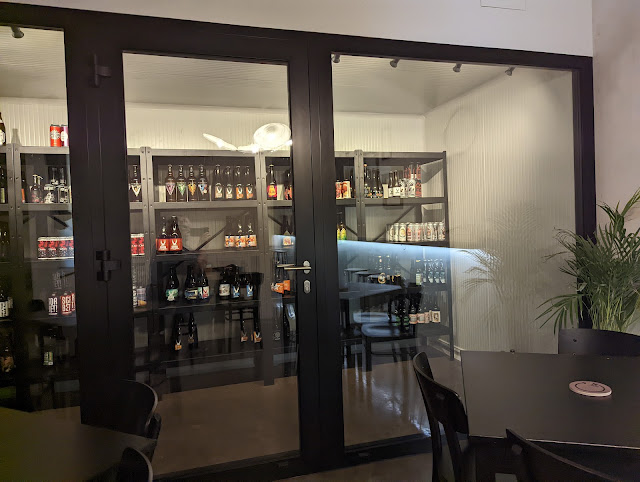 I had seen the Budvar/Permon collaboration beer all over so I decided to try it. 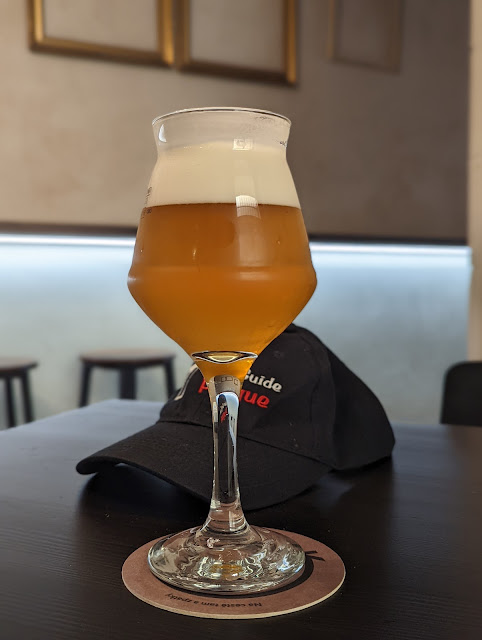 Very hoppy, nicely bitter. I know that many (myself included) really don't like the term "IPL" but I wish Czech brewers would brew more beers like this instead of a the variety of (not that original) IPAs.
They had a variety of snacks, I order the cheese one and it tuned out to be marinated cheese with peppers but with a harder cheese than the more typical Camembert style cheese. 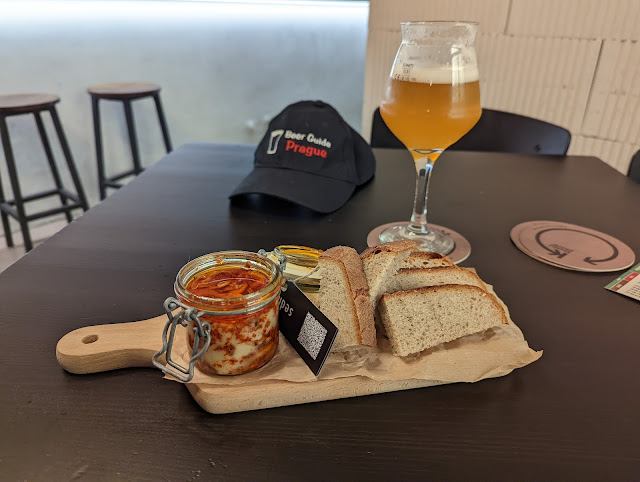 I walked a couple of blocks to Vratnicé another pub it had been awhile since I visited. 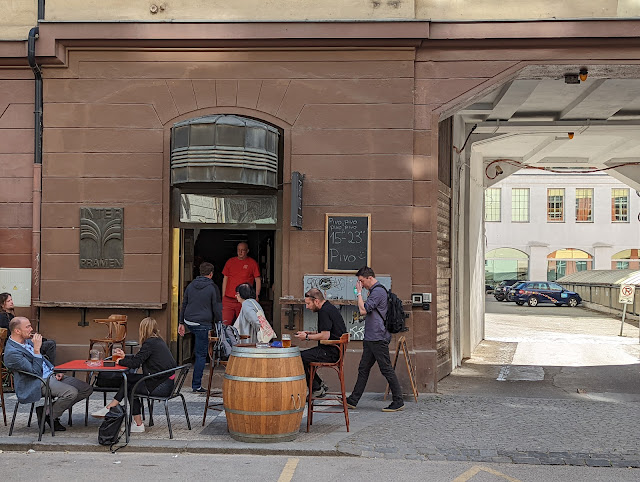 There tap list was divided into Lagers and Ales -- a bit unbalanced for me. When I was there last they mostly had Albrecht beers. Still a couple but I guess Albrecht doesn't brew enough different IPAs 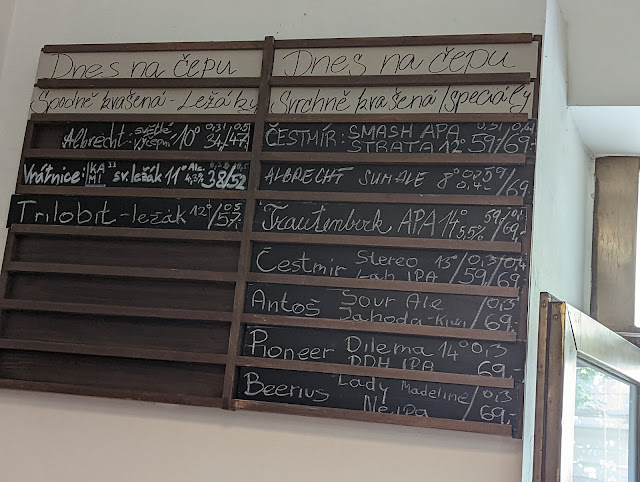 I ordered their house Světlý Ležák 11⁰. I asked who brewed it and the tapman replied "We do" -- I didn't press it any further. It was an enjoyable beer. 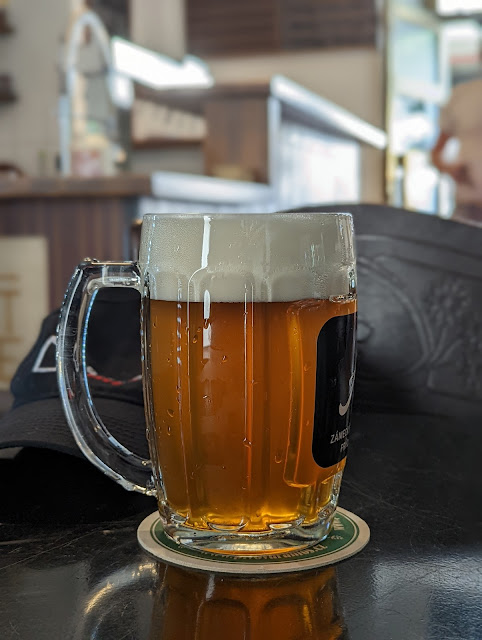 I had arrange to meet a friend at Hostomická Nalévárna but I thought I had time to sneak in one more place, Hostinec U Pivovaru 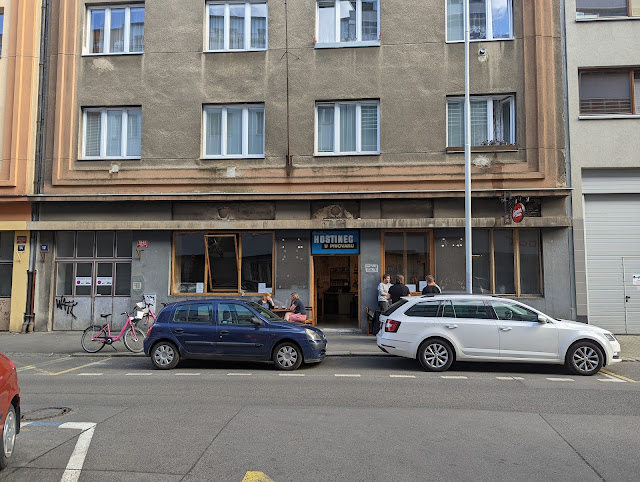 I had heard good things from some folks who like old school, bar bones, unchanged type pubs. But it seemed they might have some more interesting stuff as well -- but that was a years old Facebook post.
In addition to regular Budvar (and think Budvar Tmav). The had a bunch of tap handles just labeled basically "Budvar Microbrewery" 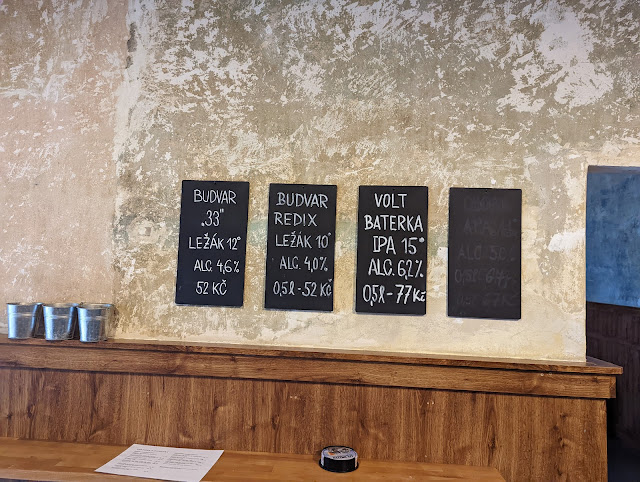 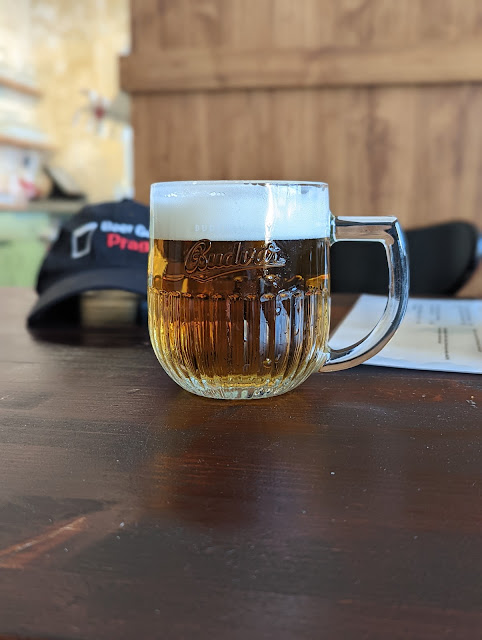 And drank it faster than it deserved. Next trip I will try and stop in and spend more time. It looked like a fun place.
Anyway, in no time I was in my favorite seat with a Fabián 12º in front of me. 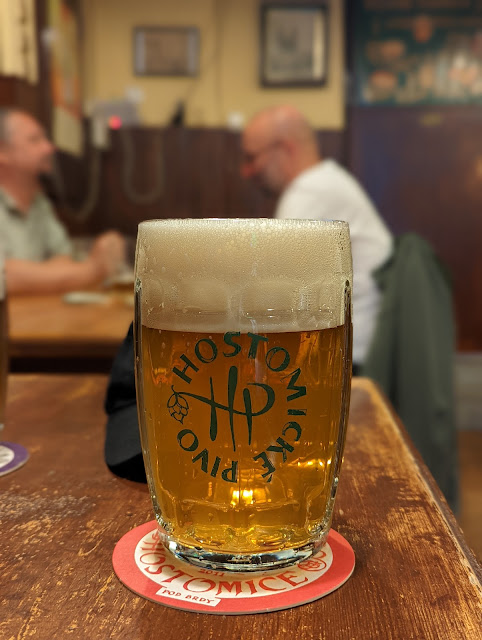 There were many of these as the evening progressed. I did have some Hermelín  along the way. 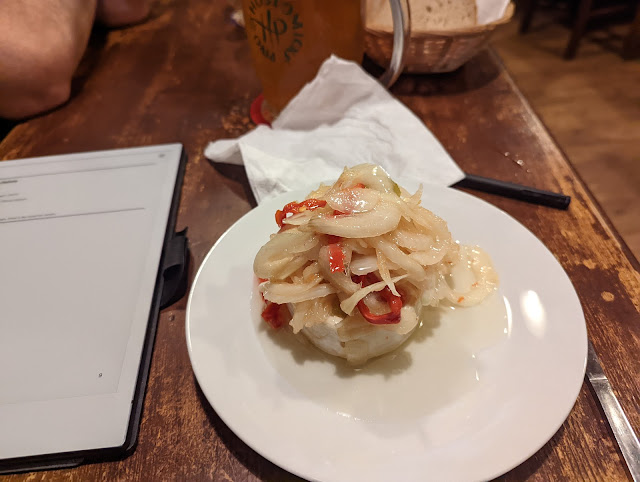 Thanks Fred, for a great series of posts about Prague, which is one of my favourite cities.

The posts were a reminder that it is now seven years since I last set foot in Prague - a situation I must rectify soon. 🙂