...and on the seventh day he rested. Are you kidding, these beers don't drink themselves!

I started off trekking down to Mrtvá Ryba, a student pub near the Charles University Botanical Gardens. It is not well marked from the street. They have a nice patio and is fairly shady with all the trees. 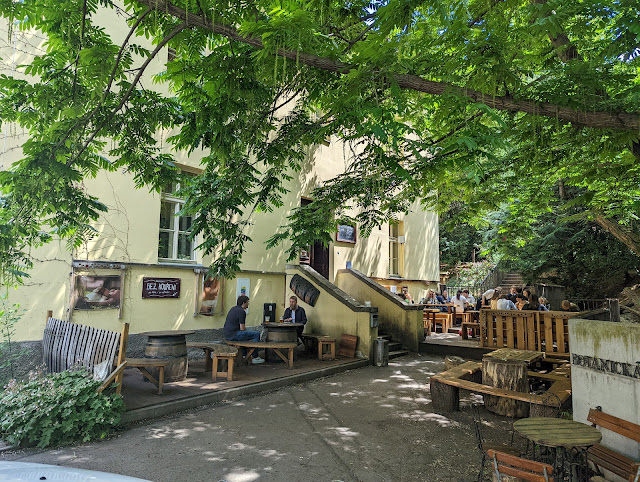 The taps are mostly Kamenice but there are other breweries represented. 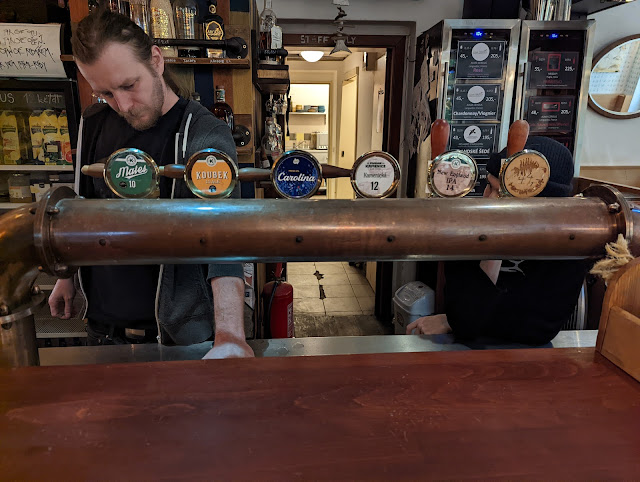 I started off with the Kamince 10º 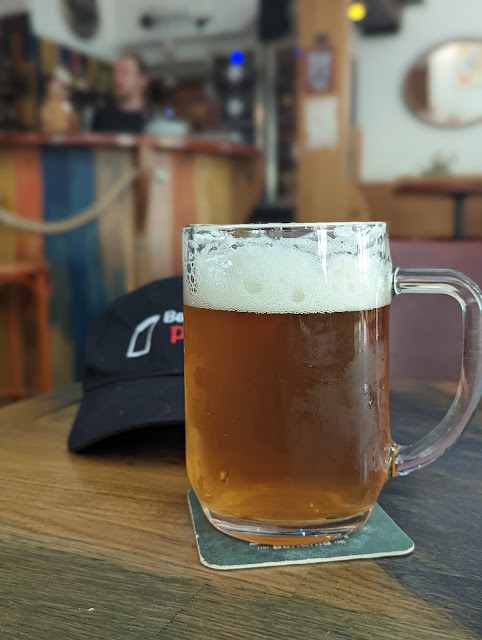 They have relatively inexpensive lunch specials: A bowl of soup, small entry and either a desert or a salad for Kč 140. This was the cauliflower potato soup. 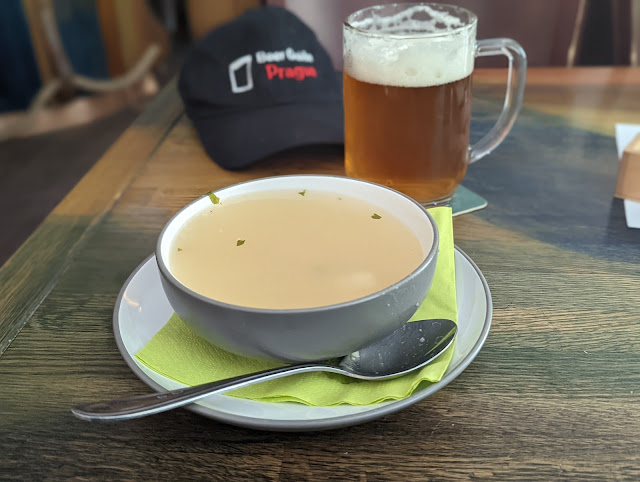 The Kamenice 10º went down to quickly, so I replaced it with their 12º 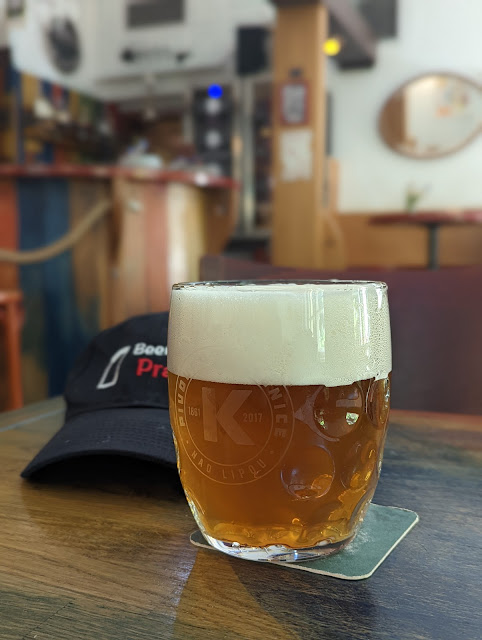 These really are different beers, with quite different. flavor profiles.  One is not simply a stronger (or weaker) version of the other. You should try both when you can.
The entree was a vegetable curry on rice. The chicken entree had sold out by the time I ordered. It wasn't a large portion but enough to take the edge off. 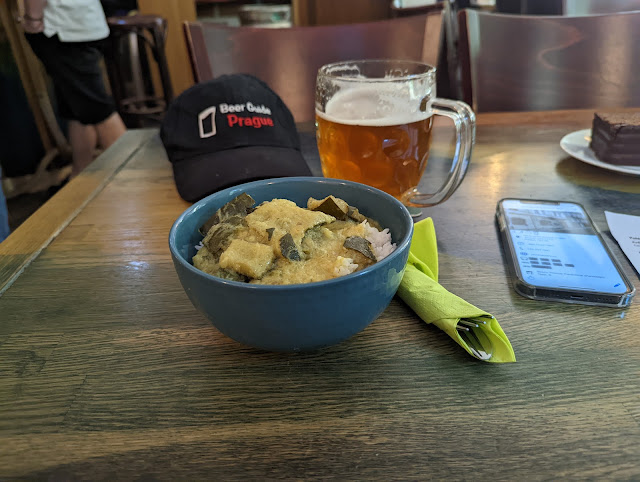 I really like Mrtvá Ryba and could easily spend the afternoon there, but there are other pubs to visit.
Next up was Beer Point, a new "self service" bar near the National Museum. 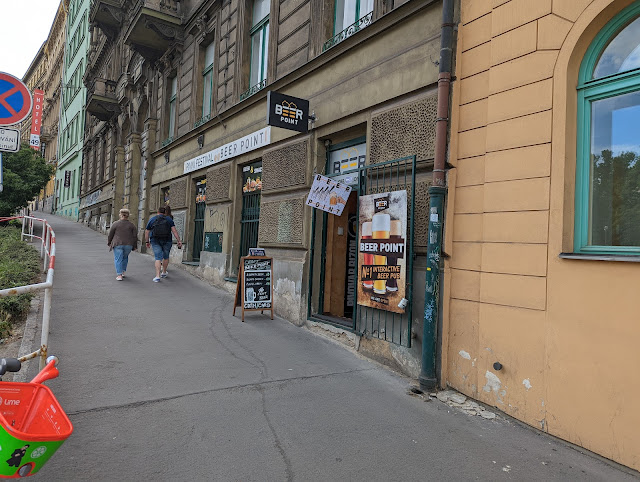 It works like other self serve places I've been to. You pay Kč 300 for a card, which has Kč270 beer credit and a Kč 30 deposit. Beers are charged by the 100ml raging from Kč15 to Kć24 -- which is expensive on a half liter basis but you can try many different beers. There are normally 14 on tap (12 today) 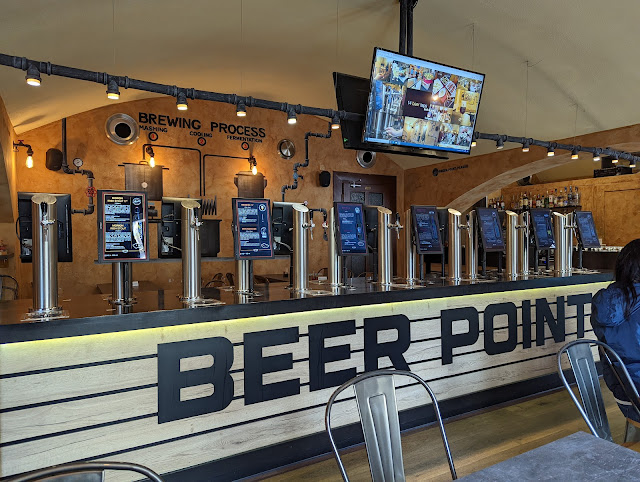 There is an information screen beside each tap. It also shows your credit and how much you've poured when your card is active. 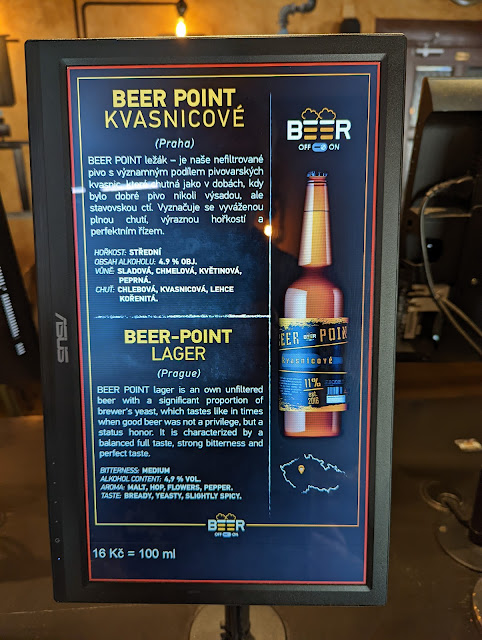 I tried three beers, all were fine but nothing exceptional. This could be a fun place with a group but I think they really need more taps for that to work. It is clear they are aiming for the groups of younger people that descend on Prague on the weekends looking to party. 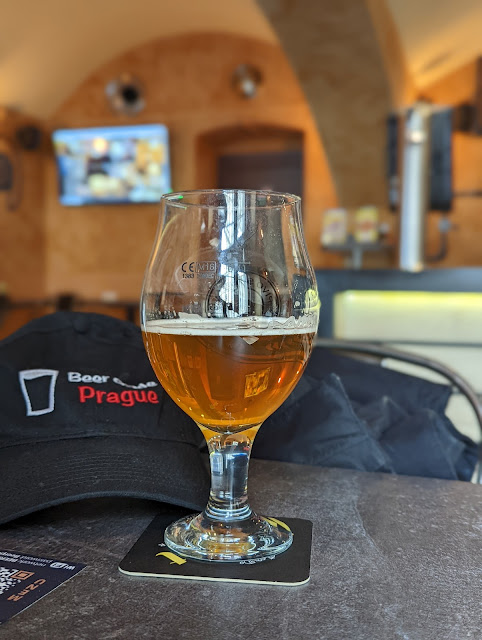 I headed next over to a place I haven't been to for a while, Pivní Bar Blanická. 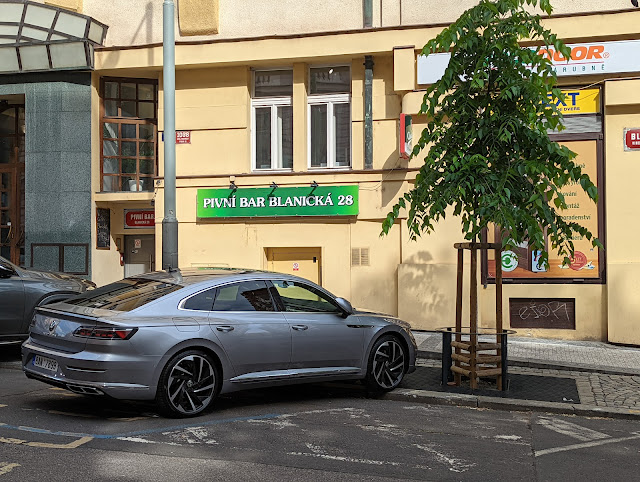 It didn't appear to have changed a bit, except more IPAs on tap (a common issue for me) 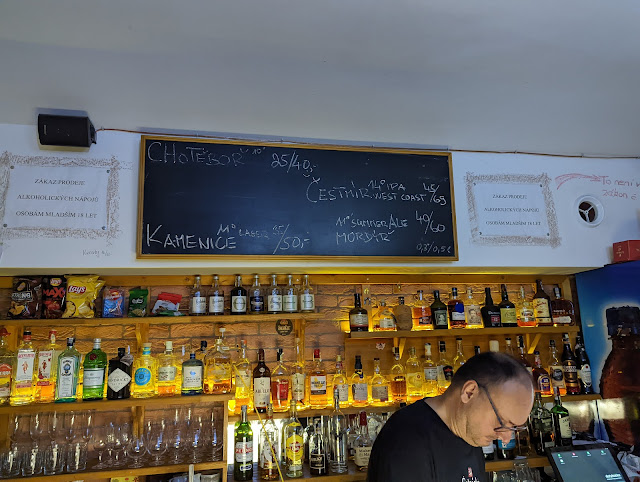 I chose the Kamenice 11º, making it a truly Kamenice day. I do have to admit the 8⁰ Pool Party sounded interesting even if it is a NEIPA (pronounced KNEE-PA here) 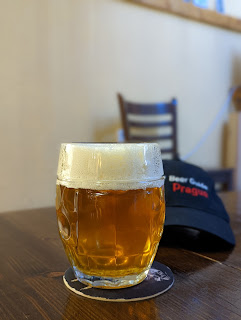 Again, the 11º is a totally different beer than the 10º or 12º
My next stop was another place I hadn't visited in a while, Galerka 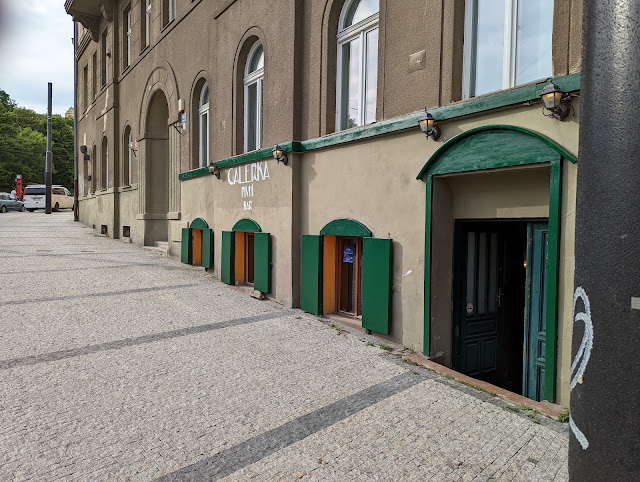 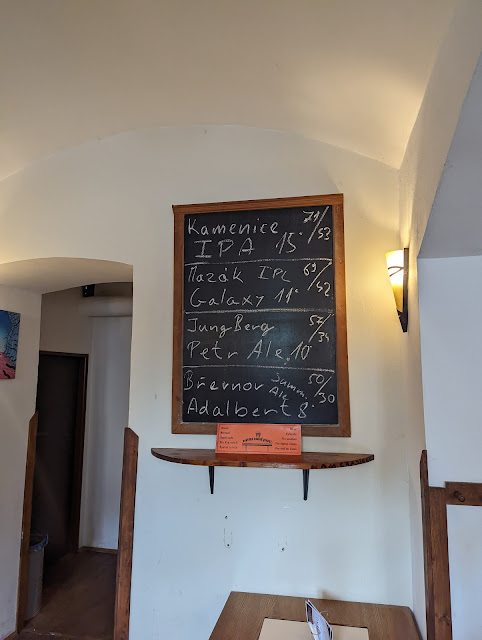 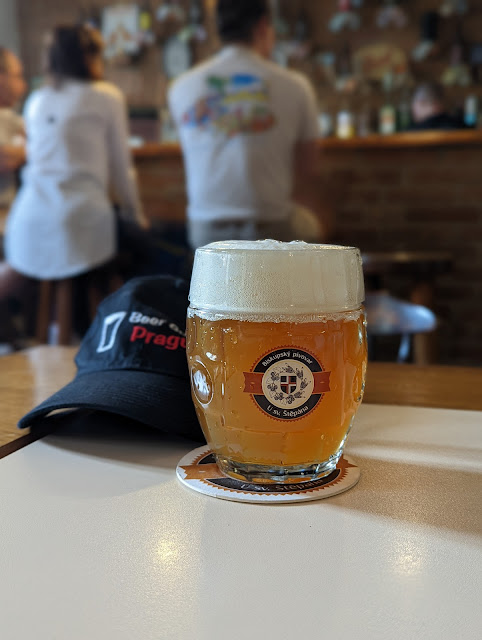 They have a good selection of snacks and sausages. This is a version sausage that was really good. It was almost juicy. The "dips" were a salsa, horseradish and a spicy mustard. 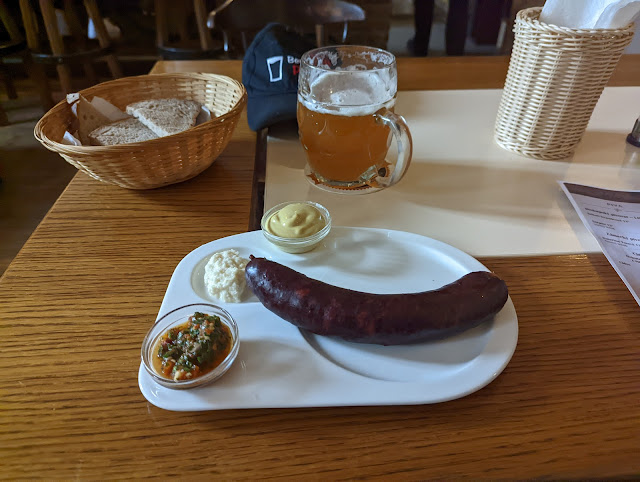 I was ready for another beer so I ordered the Mazàk Galaxy 11⁰ IPL. 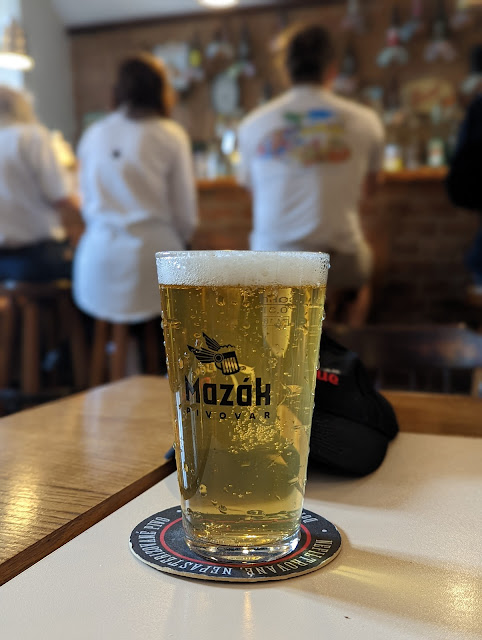 Sadly, the class wasn't as clean as it should have been, but the beer nice, very hoppy.
Down the street from Galleria is U Tři Hrušek, the second Hostimice taproom in Prague. 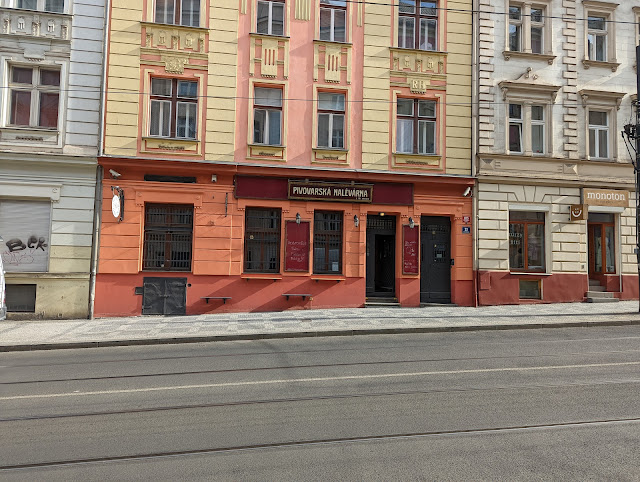 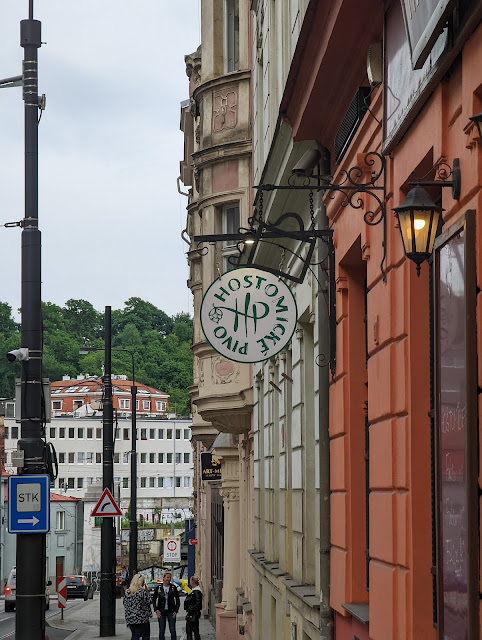 I had high hopes for this place but was pretty disappointed. 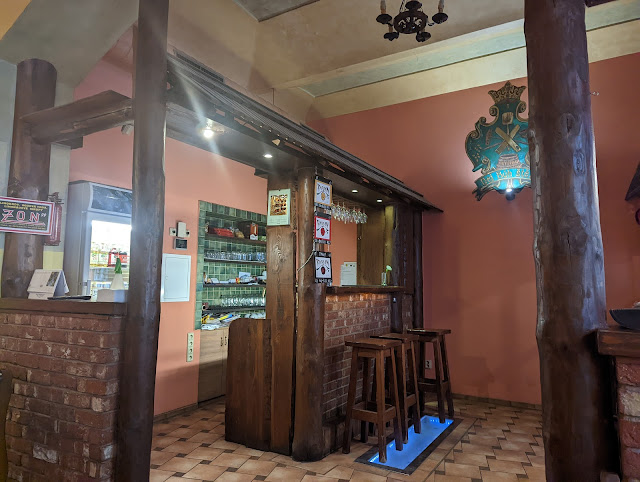 First off, the beers were good, every bit as good as at the original. I started with the Fabián 12º 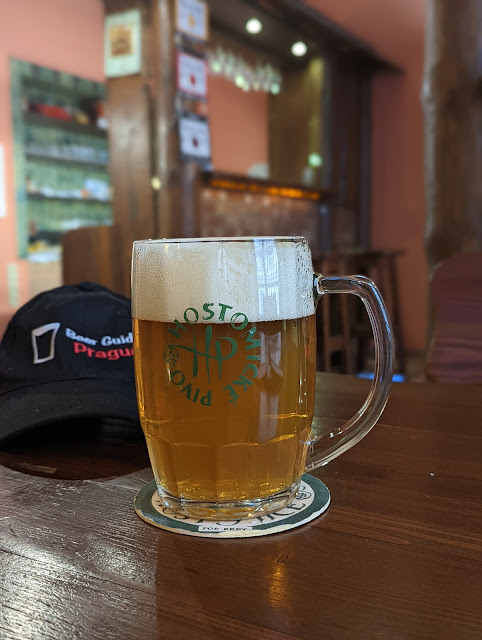 I was pretty hard on the place on twitter and I won't repeat all of that here, but the floor was tile and the walls all hard surfaces so lots of echos. And the two TVs were turned to a music video channel and were playing at full volume -- and full distortion and it took me a while to realize the channel was MTV 80's.
It gave the whole thing a surreal atmosphere. The decor reminded me of an Italian restaurant converted to a German (or I guess, Czech) restaurant. It probably would be better packed with people having a good time (and the TV sound turned off).
I was so depressed I finished my beer and left.  BTW, the prices are the same as the original location. 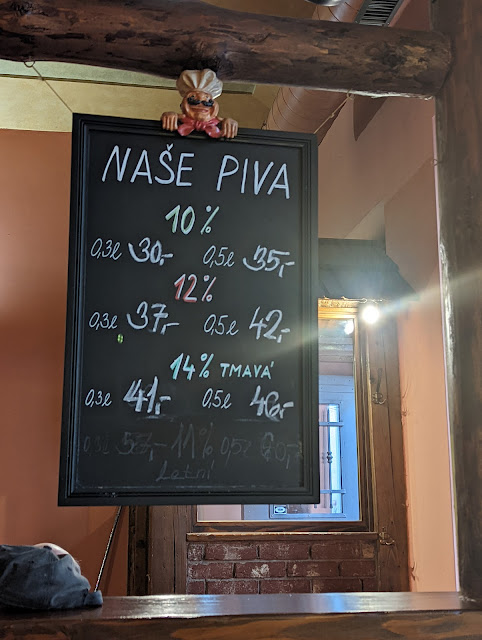