Every Saturday the Kernel Brewery (founded 2010) has an open house where you can buy bottles of their beer -- for tasting or to take home. The brewery is located beneath the archways of a railroad bridge along Druid Ave, near the south end of the Tower Bridge. There are no convenient tube stops near the brewery, so we chose to walk from the Tower Hill station, over the bridge.

Most of the spaces are industrial, storage or car mechanics. But it does seem to be "gentrifying" with a bakery along with the Kernel brewery. 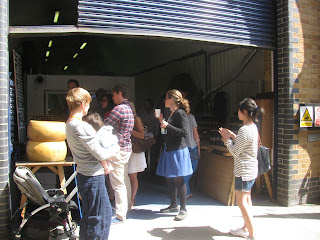 The brew differently hopped versions of the same beer, making for interesting comparisons.

Snacks were available from a vendor who had a big selection of Italian style cold meats. This was smoked beef -- I didn't write down the Italian name but I'm sure somebody will provide it. 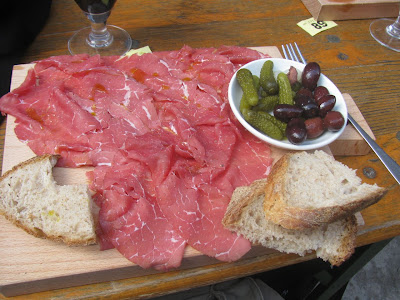 The only draft beer was an Export Stout (7.8%). It is the best stout I've tasted so far and one of the best I've had in a long time. We also had last years Double IPA, hopped with Centennial. It had mellowed nicely. 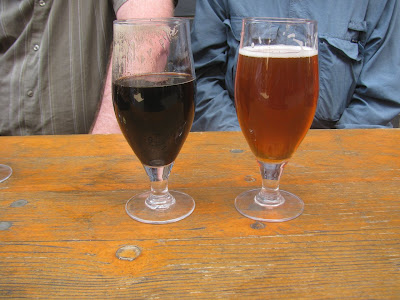 There actually are four decent pubs near the south end of the Tower Bridge. We first stopped at The Pommeler's Rest, a Wetherspoon's pub.

The interior was a typical Wethspoons. The Real Ale selection was not as extensive as some but there were some good choices. 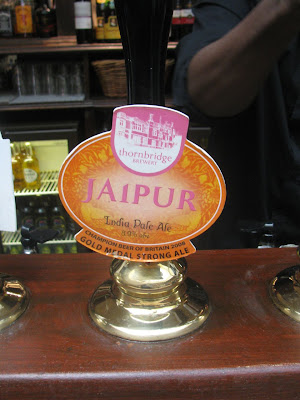 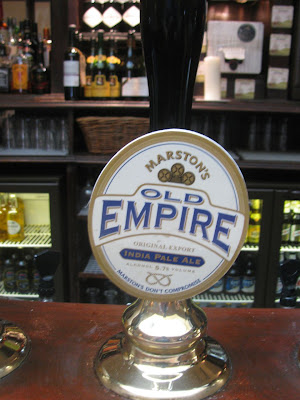 The Jaipur is an old favorite and maybe my favorite British IPA. I had not had the Old Empire before but it was pretty good. Not as hoppy as the Jaipur but very drinkable.


We walked about two short blocks and came to the Dean Swift. This is a fairly nea w pub and has quite a good draft (i.e. keg) selection and four handpumps. Quite a large bottle selection as well. We were shocked to discover that a bottle of Stone Arrogant Bastard went for £15! 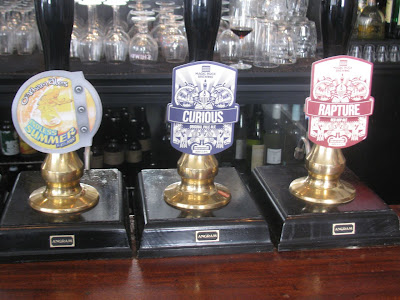 I had the Oakham Endless Summer and Tom had the Magic Rock Courious. Both were under 4% and very tasty 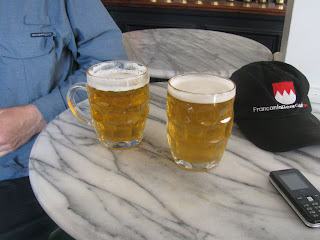 We walked back to Tower Bridge road and stopped at the Draft House -- Tower Bridge. This is a new chain, with just three or four pubs. 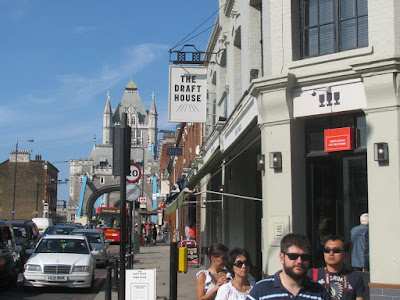 The outside wall were decorated with the names of hops. A good sign. 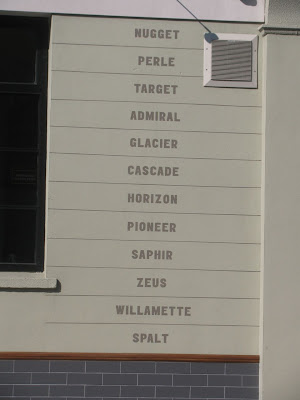 It was decorated in "American Diner" style. The first thing I saw walking in was a tap handle for Sierra Nevada Summerfest. Just over a week earlier, in LA, I had remarked I never passed up a chance of draft (or here I guess it is draught) Summerfest. But had as it was, I did pass it up. I'm here to drink British beers, damn it. 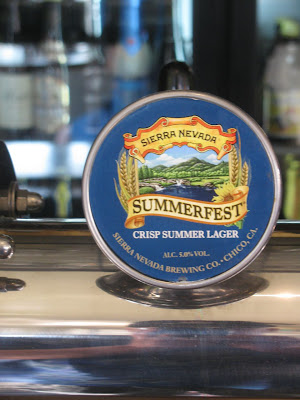 The draft select was quite good with at least three Mean Time taps and a good variety of American craft beers. I can see why our local friends like it. Only four Real Ales, though. 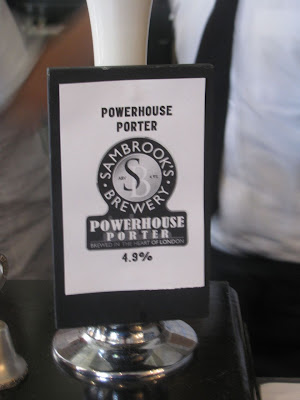 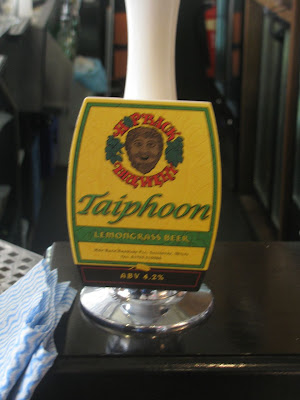 The Typhoon was supposed to be a lemongrass beer but there was no real lemongrass flavor. The porter was light and very drinkable. 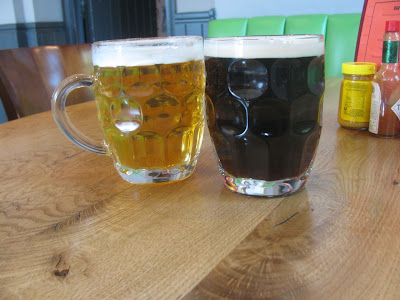 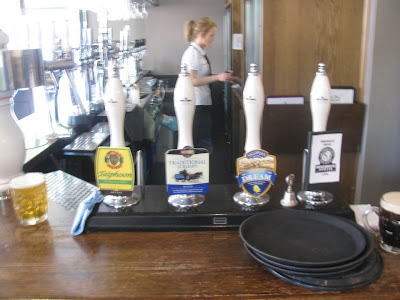 When we left, a bus went by with destination of "Covent Garden" -- we turned to each other and said "Porterhouse." We started walking to find the bus stop and so skipped the forth pub nearby -- the Bridge House -- a recommended Adnams pub.

We decided to walk to the next bus stop, since we just missed one and came upon another recommended pub, The Shipwrights Arms. It was a nice pub but there wasn't anything that caught our eye so we headed on. 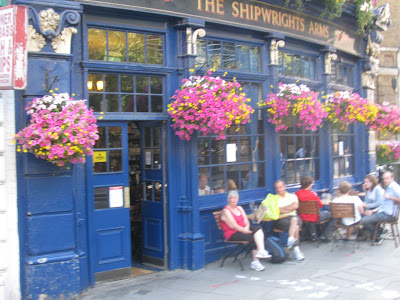 We caught our bus and in a little while came to the Porterhouse. As it was Saturday night, it was packed but we managed to find a table in what was really a hallway between sections. 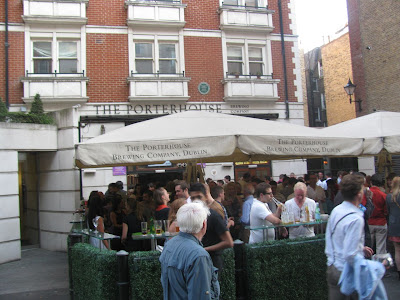 The Porterhouse is a Dublin brewpub (now microbrewery) that is famous for it's Oyster Stout. 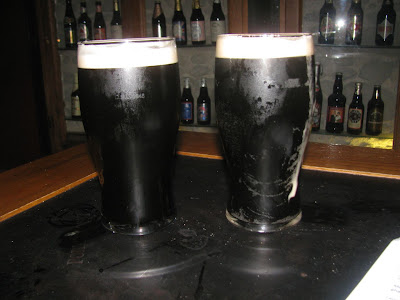 It was as wonderful as ever.  One was not enough.

It was passed dinner time so we ordered some fish & chips. The fish was very good, though the chips were a bit underdone. Maybe the Irish just want more residual potato flavor?  The green stuff in the little bowl is "mushy peas." Don't ask. 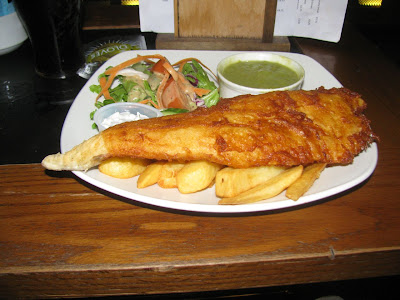