The day started off slow. There is a whole online community of people who do crazy things when there a cheap airfare somewhere -- like visit Warsaw in February. It turns out another person from LA had come to Warsaw on the same deal I got, for the same weekend. So we met for a coffee.
Then I caught a tram up to a big, new shopping center that has a Bierhalle brewpub. 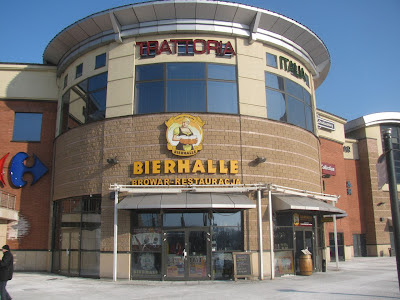 They had the same beers on tap as the one near the old town. I hadn't hade the weizenbier, so I gave it a try. In general I am not a fan of brewpub wheat beers but this one was pretty good. It was very ester-y in the nose (i.e. banana) but not too much in the taste -- which is good because I really dislike wheat beers tat taste like banana juice (but some people do so you find a lot of them). 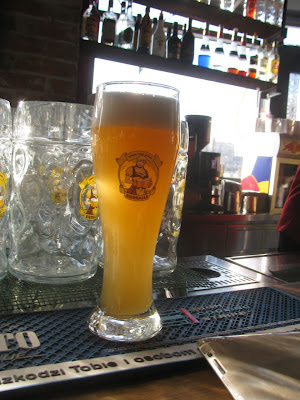 For comparison purposes, I though I'd try the Pils again. I think it was much better here than the other Bierhalle, but maybe it was just my taste pubs were fresher. 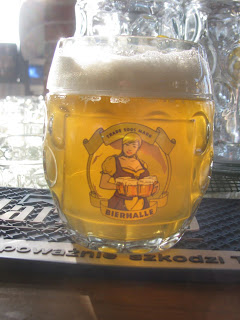 They had their brew system in the window and it was pretty unique -- the mash tun and boil kettle had glass sides. I would love to see it in action. 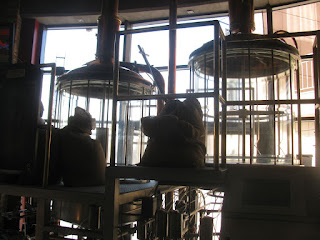 The other places I wanted to visit didn't open until 4pm so I had a bit of time. The first one had now real address as far as I could tell. I was told it was built into a large bridge over the Vistula. The was a tram stop at the bridge, so I went out that way. I wanted to find the place before it got too dark.

Big mistake. For a mile or so before the river the bridge is basically an elevated roadway. The trams stop was literally on the bridge, just at the river.  So my choices were to take the stairs down to ground level (a long way day -- over 100 ft, I'd guess) or walk back along the bridge. There actually was a sign for a pub pointing down towards the river, but it was a completely different name. I didn't want to walk down on those stairs and then back up for no reason.

So I started back towards town. Every so often there was a little town structure that sometimes had stairs leading to ground level. Put no signs of any pub. When I finally reach civilization (walking against a cold wind!)  there was a larger tower and this one clearly had a pub with a (obviously now closed) garden.  It wasn't the right pub, but it was open and it was warm. 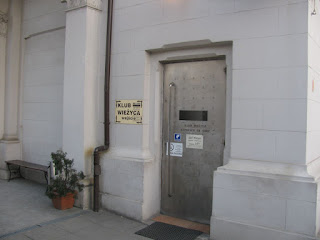 So I went in and had a Zywiec and warmed up a bit. Then I used a couple of my 20 words of Polish on the bartender -- "Execuse me, do you know where ... is." She pointed back the way I came, and then pointed down a few times, which I took to mean down at ground level.

So I went down the stairs -- a long way.  The bottom could have been a scene from Mad Max. I could see the headlines "Tourist Killed while walking thru wrong part of town..." but as I followed the bridge, things improved and pretty soon there were building under the bridge with shops and restaurants and such. But no pub. Eventually I stumbled across a pub sign that I knew was for the pub I was looking for. It seemed to say it was around the corner, so I went in that direction but nothing. I came back to the sign and released it was in front of some stairs that led up into the bridge structure. The pub was actually inside the bridge, just beneath the roadway. Why there was even a place there that you could turn into a pub, I have no idea. The bridge was rebuilt so after WWII so maybe we should ask the ghost of the Soviets.

Any, I went up the stairs and into Czeska Batsza -- the "Czech Tower" -- a put that sells only beer from small Czech breweries.
Posted by The Mad Brewer at 12:05 AM

Email ThisBlogThis!Share to TwitterShare to FacebookShare to Pinterest
Labels: 2012, Warsaw