First off -- many of the Polish words here are technically mis-spelled: I haven't figured out how to get all of the diacritical marks yet.
It was a balmy 12°F when I arrived at my hotel, across the street from this...

After changing to some warmer clothes, I went out in search of beer. The first place on my list had closed -- or else it was cleverly hidden so tourists like me wouldn't find it. Second place on my list was called Sketch.

They had four Polish beers on tap, three Belgians and Guinness. Picked one of the Polish ones pretty much at random.
It was well made and tasty, but not particularly exciting. But it did hit the spot. 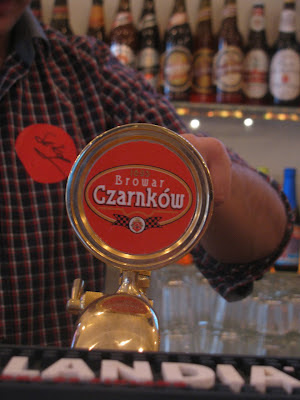 The had a quite extensive menu, but I wasn't too hungry so I had some soup.


Needed another beer so I picked one of the other taps...

A little bland for my taste, but well made and no real flaws. The bottle list was quite long and as there were a number of Porters on it, I will be back.

Heading in the direction of the Old Town I soon came across one of the brewpubs in Warsaw, Bierhalle

The inside decore was Fake Bavarian -- picture the kitschiest German restaurant you've been to and you've got the idea. They have three beers on draft, Pils, Wiezen and Marcowe, which I latter learn was "March" so I guess you'd call this a Märzen.

It was very malty and quiet nice.

As I headed towards Old Town I came across the Holy Cross Church. What's a travel blog without pictures of old churches?

Down an alley I found Pub Nora. A friend who had been to Warsaw years ago highly recommended it, but recent reviews on some websites were not as promising.

The pub is next to the University and would have been at home in any college town I've lived in. It clearly (or maybe unclearly) was a smoking establishment. Only three beers on draft, which is down from the 14 they had when my friend was there. Picked the one I hadn't heard of.


Just like the others I'd had, well made and drinkable but missing some "oomph."

They had Zywiec Porter in bottles, so I ordered one. To give you the idea of the place, I had an empty glass in front of me, so the bartender just brought me the opened bottle. You've got glass, right?

Now this was an amazing beer. Rich and dark and at 9.5% there was enough oomph. I wanted to have another, but that would have lead to another and I still had places to visit.

Walking up the same street, I came to Browarmia, another brewpub. It was dark by the time I got there so I didn't take a picture of the outside.

They had a pils, weizen, stout and a seasonal. I started with the Pils.

It was very soft, which you don't often find in brewpub beers.  I think it was the best of the pale beers I'd had today. It was time for some food so I ordered some grilled Kiełbasa. It was very good.


My waitress spoke some English so I asked about the seasonal. She pointed to where it was on the menu so I said yes. She told me it had ginger in it and boy did it.

On the English translation on the menu it said "Crimson Ale" and that they used CaraRed to get the color. The ginger was nice, strong but now overpowering.

I though I should try the stout. I was sort of hoping for a disguised Baltic Porter but it was a dry stout, like you'd find at any American brewpub. It was quite nice -- lots of nice burnt character.

By this time jet lag was kicking in so it was back to the hotel. Hopefully tomorrow I'll make it up to the Old Town for tourist pictures.
Posted by The Mad Brewer at 12:31 AM

Email ThisBlogThis!Share to TwitterShare to FacebookShare to Pinterest
Labels: 2012, Warsaw