Another Day in Galway

I am old enough to (barely) remember JFK's visit to Ireland. They have a marker were he became a Freeman of Galway Borough. 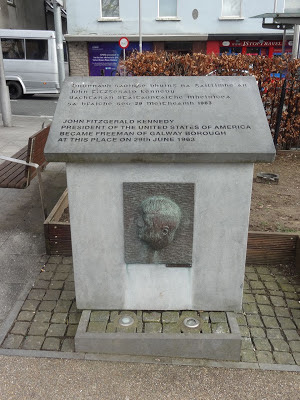 Enough history, time for beer. I took the local bus to the nearby village of Salt Hill, where you have a good view of Galway Bay.

And also a good view of the Oslo Bar, home of the Galway Bay Brewery.


They have pretty similar beer selection to the Salt House (as would be expected). I started off with the Bay Ale, an Irish Red Ale.

It was well made and tasty, just a hint of roast malt (which gives the red color) and mildly hopped.

It was lunch time, so I ordered a bowl of their Atlantic Chowder. The fish comes from local fishmongers and it was delicious.

Next I had the Full Sail IPA. Paul at the Salt House had told me the night before that a new batch was going on today.


It was clearly unfiltered -- which I usually don't mind (and in some beers prefer) but I think this would have benefited from some more time to settle. There was a bit of yeastiness in the flavor but all around it was enjoyable beer. The hopping was closer to an English style IPA than the aggressively hopped American version.

I new I was going to visit the Salt House again that evening, so passed on the other beers and caught the bus back to Galway. I played tourist for the rest of the afternoon.


Soon enough it was beer-thirty. I headed first to the Bierhaus to check them out more closely. There were a couple of English porters in bottles that look interesting but while rules are made to be broken, I didn't want to break this one so early. So I had a Trouble Brewing Dark Arts Porter.

It was its usual excellent self, though every time I have the draft version it just reminds me of the wonderful cask version I had years ago at L. Mulligan Grocer.

I wandered down the street to the Salt House where Paul immediately poured me a Full Sail IPA.

This one was much clearer and much crisper than the one earlier in the day at the Oslo. It was much more enjoyable.

There was one Galway Bay Brewery beer I hadn't yet tasted -- the Buried at Sea Chocolate Milk Stout.


Lactose (Milk sugar) is not normally fermentable by beer yeast, so it is often used if the brewer wants a sweeter beer. The combination of cocoa and lactose really worked in this case. The chocolate was very noticeable but not overpowering and the result was a rich tasting beer but one that was not overly sweet. One is enough, though.

It was tempting to dive in to their excellent selection of New Zealand or Italian beers, but I decided to stick to Irish and ordered a bottle of 8 Degrees Knockmealdown Porter.


It was, as we say, a "happy beer" -- a little over carbonated and foamed up in the glass no matter how gently one poured. Sometimes that can be a sign of a wild yeast infection in the bottle, but luckily that was not the case here. The beer had a nice chocolate malt flavor. I should point out that I mean the flavor a malt called "chocolate malt" (mainly from its color). While it does have a faint chocolately taste, it is not at all like adding cocoa to the beer.

I was heading back to Dublin in the morning and didn't want to make too late a night of it. Plus, I needed some food so I headed back to the fish shop I'd visited the night before (McDonaghs)

I started off with a half dozen oysters...

I am not a Haggis expert by any means, but this was very tasty. The batter really added to the flavor.

I was tempted by a couple of places selling "Hot Whiskey" as it was quite cold that evening, but I resisted.

Email ThisBlogThis!Share to TwitterShare to FacebookShare to Pinterest
Labels: 2013, Galway