I recently did another quick trip to Ft Lauderdale -- there was a fare sale and it was about $150 round trip from Los Angeles -- hard not to go. I used to go to that area frequently and have kept in touch will some of the folks so I got to see some old friends and drink some East Coast Beer. And earn a bunch of frequent flyer miles to keep my status for next year.

Since I don't drive when I've been drinking, I had to figure out the Broward County Transit bus system.  An all day pass was reasonably priced and even though it was Sunday, the buses ran frequently enough that I was soon at my first stop of the day: Tap42

It was just past noon but the place was packed but I managed to squeeze into a seat at the bar. It turns out that on Sundays they serve "bottomless" Bloody Mary's and Mimosas and that is what most people were drinking.

The name sort of implies they have 42 beers on draft but their board lists 52 -- a bonus 10! This was the board in front of my seat but I drank mostly off the second one. (Notice #21 "Hoegaarden Hefeweizen" -- Pierre Celis is probably spinning in his grave)


They also sell 6oz tasters in flights of three. It is way more expensive (no problem with that as its more labor intensive) but I decided to go that way in order to taste as many beers as I could. 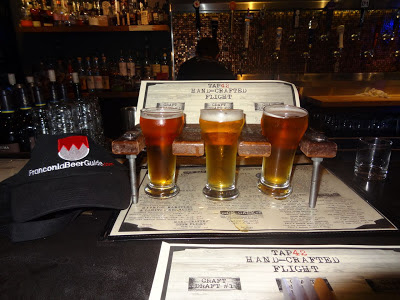 I soon ran into a problem: in each flight they were out of at least one of my choices.  I really was looking for Cigar City beers and they had five listed on the boards but it turns out they were out of all of them except the one I'd had before (Jai Alai IPA). I had four flights of three for a total of 12 tasters but there were seven beers I'd ordered that were out.

Normally you can expect the odd beer to have kicked before but when you have a hand written "chalk board" listing the beers there is no excuse not to erase or otherwise mark those that are out. Since most of the people were drinking Bloody Mary's or Mimosas it is not as if there was a sudden rush. Even if there had been a mad rush on Saturday night there was plenty of time to update the board.

This makes me think they are more interested in the appearance of having lots of beers than there are actually interested in the beers. In other words, the beers were really a prop, a gimmick.  If I head back to the area I will give them another try but in my book they are on "probation" now.

I should mention a few of the local beers I enjoyed: Engine 15 (of Jacksonville Beach) Battle Axe IPA,  Swamphead (of Gainesville) Big Nose IPA and  Green Room (of Jacksonville) Head High IPA. There were some others but either I wrote the name down wrong or they aren't real breweries.

After going zero for three on my Cigar City flight, I decided to leave and try another place. I won't give you the name, because I never made it there -- I kept getting distracted by beer.

When I got off my bus and headed in what I hoped was the right direction, I came across a restaurant named T-Mex Cantina. I wasn't hungry but I noticed they had a local beer -- Miami Brewing Big Rod.  When I asked about it, I realized I had already tasted at Tap42 -- there is was called "Coconut Blonde."  It would have been rude to have just waked out so I had a Harpoon IPA.


After the Harpoon, I set out to find my bar when I ran across a place with a big Chimay signboard on the sidewalk. It was called Rokbrgr and by its name you can guess it is a fancy burger joint. With a nice beer list.


I didn't recognize the tap on the end and was told it's "Black something" by Brooklyn Brewing. "Is it There Will Be Black?" I asked. "That's it" said Melanie, the bartender. This is Brooklyn's "Brewmaster's Reserve" for winter 2012.  I had to have one.

I suppose you would call it a Black IPA but it had a lot more black malt character than the West Coast Black IPAs. A very nice beer.

OK,  again I was off to find my original destination. But then I came across Original Fat Cat's -- which I had read about in my research, so I went in. Big mistake -- so far as getting to where I was going was concerned.

They had a number of beers from Due South Brewing  -- I went with the Category 3 IPA because I'm not sure at this point I would have tasted a more delicate beer.

The beer was served in a plastic cup -- which is not my favorite -- but while on a Sunday evening the place was empty, I could see on a Saturday that glass might be a problem.  The beer was listed as a "Florida Style IPA" -- that is why I like to travel -- who knew there was such a thing. If this is an example, then maybe we need more Florida IPAs.

I was just going to have one but then I noticed a beer engine and I asked what they had on cask. It was Victory Hop Devil, so I had one. Just to be polite, you see. A very nice beer. I'm not posting a picture as it looks just the same as the Category 3.

I finished and paid my bill and got as far as the sidewalk when my phone rang and was my local friend, asking where I was. When I told him, he said "We're just around the corner, wait there." So I went back inside.

I decided to have a Cigar City Jai Alai IPA while I waited and before it was served, in came my friend. My final destination for the night was to be a place called Laser Wolf -- it didn't open until 8pm -- but he had been by there and said it was closed. So we stayed at Original Fat Cats for a couple of beers. No pictures again because it looked the same.

I had a noon flight home the next day and it had been a hard day so I decided to call it a night. As I checked my iPad for the bus schedule I realized that earlier I had looked at the Saturday schedule, not Sunday's. On Sunday the buses stop around 6pm.  That is why they invented taxis, for people who stay out later than public transportation operates.

So I found a taxi and gave him my hotel's address. As we got close I decided I could use a nightcap so I had him let me off a block away at place called The Dive Bar. I had walked by it earlier when heading for my first bus. They had a sign for Inlet Brewing (of Jupiter, FL) in the window so it was a chance for a new brewery.

It was a friendly looking, neighborhood type place. Sunday was also Karaoke night so I knew I wouldn't be staying long. I ordered an Inlet "Monk in the Trunk" Amber Ale, which I am sure I didn't properly appreciate giving the number of hoppy beers I'd had, but it was well made and tasty and I would order it again.

As I was getting ready to leave I saw a sign "Sunday Special Jai Alai IPA $4." They were bottles but since they went to all that trouble to have a special, it would be rude to leave without having one. So I ordered one. I think that was the "beer too far" because the trip home on Monday was a lot longer than the trip out. Or maybe it was the Karaoke.

It has been maybe six or seven years since I traveled much to South Florida. Back then it was a bit of a beer wasteland -- a couple of British expat pubs and the occasional German restaurant with some interesting beers. Things have clearly improved. Not yet quite a beer destination but more than enough to keep a beer traveler interested.

Email ThisBlogThis!Share to TwitterShare to FacebookShare to Pinterest
Labels: 2013, Ft.Lauderdale