It sunny in Dublin and raining in Los Angeles.  I'm sure there is something profound in there somewhere. After a beer or three maybe I can figure it out.

Dublin doesn't seem to go in much for early drinking. It's after a 11am but the first couple of places I checked out weren't yet open.

M.J. O'Neill's on Suffolk St was. It turns out they open even earlier than I remembered -- 8am. Self, make a note of that. 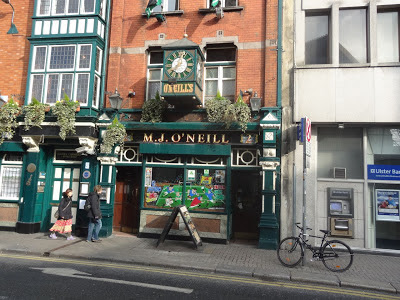 I started off with an O'Hara's Pale Ale. When I was last in Dublin the O'Hara's beers were a bit off -- high levels of diaceytl  (which can give the taste of butter).  I am happy to say the problem has been fixed and this was a nice start to the day.

For a follow up I went with the Trouble Brewing Dark Arts Porter. This is one of my favorite Irish beers. It is even better on cask but still quite good when CO2 dispensed.

I had a bunch of places I wanted to check out, so decided to move on. As it turns out, the next place was not yet open but the second one, The Palace Bar, was. I had never been here before but had read some reviews that were promising. 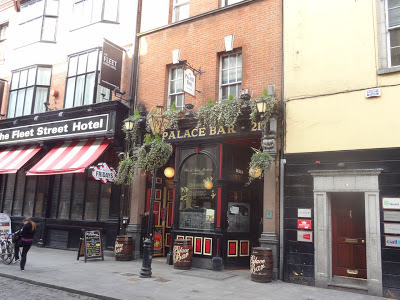 It is an old pub (founded in 1823, of which they remind you constantly). Right up front was a hand pump with a Dungarvan Helvick Gold pump click. OK, worth a stop.

Sadly, I think the cask was a bit past its prime. That is the down side of cask beer and it can be a problem for pubs that don't sell a lot of it. It was drinkable, though, so I drank it.

The had a "fake" hand pump with a clip for O'Hara's Leann Folláin, their 6% Extra Stout. I have had this in bottles but not on draft. After checking that it was truly on tap, I ordered one.


Now this is a very nice beer. Rich and Roasty and it actually tasted stronger than 6% but that may just be all the sub 5% beers I've been drinking. They also had O'Hara Coffee Stout -- a beer I've not tasted before -- but I thought I'd save that for another visit.

The next stop was the Bull & Castle. When I was last here they styled themselves as a "gastro-pub" and were really pushing the food. I came in once at 4pm and they wouldn't let me just order a beer, I had to order food if I wanted to sit a table. They are now part of a steakhouse chain so I didn't know what to expect. 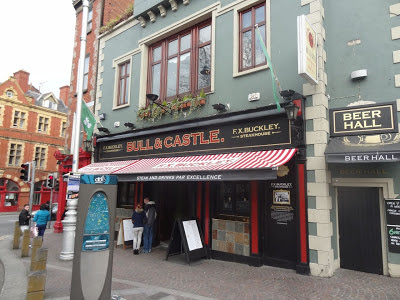 The range was not bad, but I have run into the problem with Irish Craft Beer -- there are more places to drink than there are beers to be served. That is, almost all the interesting beers I had already had in the past two days. I went with one I hadn't had before Carrig Lager,

It was fine, nothing special but not bad. Would probably have better as the first beer of the day. I had a really good bowl of Potato and Leek Soup, though.

It was close to 4pm so I decided to walk over to L. Mulligan Grocer. On the way I saw this sign which made me laugh... 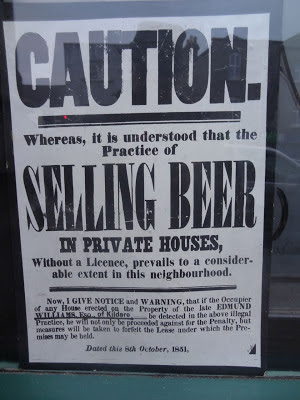 I also passed a store that looked interesting... 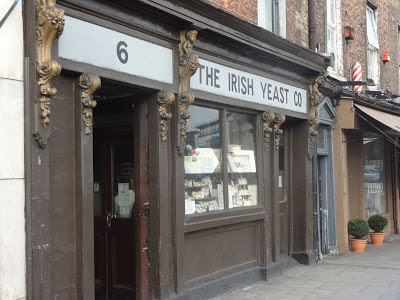 but they turned out to sell supplies to commercial bakers. Darn.

Soon I was at L. Mulligan Grocer on Stoneybatter. 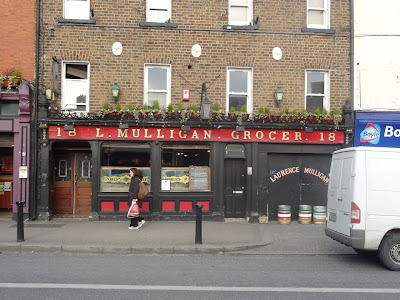 Again, a very nice selection of beers (and a great bottle list) but I had had most of them. One I hadn't was 8 Degrees Barefoot Bohemian.

Tomorrow I'm off to Galway, more for touristy reasons than for beer, but they do have a brewery there.
Posted by The Mad Brewer at 10:57 PM

Email ThisBlogThis!Share to TwitterShare to FacebookShare to Pinterest
Labels: 2013, Dublin