When I arrived in Galway and walked out of the train station i was hit by a cold wind, off the North Atlantic.  When I left LA I was trying to decide between a heavier or light jacket. I am glad I went with the heavier.

After checking in to the hotel I wondered around the town. There were a couple of places on my list that were in the center but their beer lists were not interesting. Eventually I ended up on Ravens Walk in front of the Salt House.

This is part of a small chain. I had visited their first Dublin pub, Against the Grain, a couple of times. They also have a brewpub in nearby Salt Hill (the Oslo Bar) and the beers I had in Dublin were well made but not too interesting. So I wasn't sure what to expect. 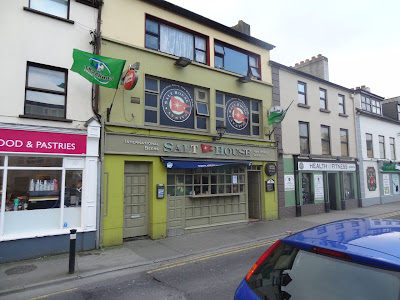 They had an impressive set of taps, with three American craft brews (Anderson Valley Imperial IPA, Sierra Nevada Draught Ale and Celebration), five of their own Galway Bay Brewery beers and a few other Irish Craft Beers.

Paul, the bartender, had given me samples of the Galway Bay beers and I decided to start with the Strange Brew -- the name they give to their occasional beers -- this one being a brown ale. It was the last keg they had so I might not have another chance.

The glass actually says something like "We feel Awful that some people have to drink bland tasteless beer so we decide to cut the crap and brew our own..." The brown ale was nice. I tbink it would be a good addition to their lineup.

I followed up with their porter, which was had a nice chocolate malt flavor and some hop bitterness in the finish.


I decided  to stick to porters and saved the Galway Bay Milk Chocolate Stout (made with chocolate and  lactose) for another time. So I had the Porterhouse Plain Porter.


I like the Porterhouse Oyster Stout so much I sometimes ignore the Plain Porter when I am at a Porterhouse pub.  It was in good condition and very tasty. It was one of two beers they served with a nitro mix -- you can guess the other...

My seatmate at the bar had ordered a porter from Denmark and let me have a taste. It was so good I had to order one for myself and again break my rule of only Irish beers from Irish Breweries. It comes from the To Øl in Copenhagen but like so many famous "Danish" beers it is really brewed at De Proefbrouwerij in Belgium. But it still was very nice and at 8% a bit stronger than I had been drinking.


Since I was off the reservation, so to speak, I went all the way off and had a beer from New Zealand, the Hopwired IPA from 8 Wired Brewing in Blenheim, NZ. Made, of course, with NZ hops.


It was fantastic. They had a number of NZ beers and it was tempting to work my way thru them, but both my liver and wallet would have objected, so I decided to move on.

I walked up the street a bit to the Bierhuis, another pub that was recommended to me.


The beer selection was a bit more international (lots of ImBev beers on tap), not as many Irish beers but they did one the Trouble Brewing Sabotage IPA on cask, so  I had one.


I noticed down in the bottom of the cooler that there was a Stella Artois Cider. Who knew? Didn't feel the urge to try one so if  you want to know how it tastes, talk to somebody else.

On the way back to the hotel I stopped at a Fish and Chips shop and got some dinner. Salmon was 25 Euro cents more than cod, so I had salmon and chips. Very good.

Email ThisBlogThis!Share to TwitterShare to FacebookShare to Pinterest
Labels: 2013, Galway