Well, school started to day so the vacation is over. But it only lasted until about 2:30 so there was time to get in a short ride. It was threatening rain, so I did want to go to far. A bit north of Bamberg is the village of Kemmern and one of the three breweries in the area named Wagner.

I headed out, but was dreaming of that first beer and missed my turn and ended up in the harbor area. Needless to say, they don't get many bicycles there and so it took a while to find my way to the right direction.

When I arrived the sun was shining enough that the beer garden was open so I sat outside. They have three beers on tap today a Schwarzbier and Hefeweizen on regular draft and a pils from a gravity barrel. I started with the Schwarzbier - it was dark brown and malty. Sort of on the border between a standard dunkles and a schwarzbier. Very drinkable and was soon gone. Beer number two is the pils. This is one of my favorite beers around here -- clean and crisp with enough hop bitterness that you know its not a helles. I want to have another but if I do I'll won't be able to stop at another brewery on the way home. What a dilemma! 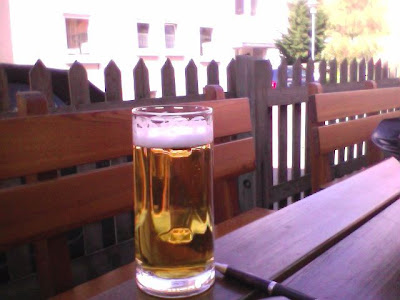 Update: Well as a wise man once said "Prior Planning Prevents Piss Poor Performance" -- I forgot that Brauerei Eichhorn in Dörfleins is closed on Mondays. But it added a few km to my ride and it didn't rain so I'm not complaining too much. For consolation I went to Spezial for dinner and had both and "U" and the lagerbier (rauchbier). Yumm.
Posted by The Mad Brewer at 7:46 AM

Hi, i am a beer lover travelling to Franconia and Czech Rep.for a bit of a bike tour and beer recon mission very soon . I was wondering if you knew of any places that have beers one should taste or routes to ride. Thanks