It was warm and sunny, a perfect day for a ride. I headed off to Memelsdorf, about 9 km away and home to two breweries, Brauerei Höhn and Brauerei Drei Kronen. Brauerei Höhn is notible in that they still use a wood fired brew kettle. But since I could only stop at one brewery on the way out, I left if for a possible stop on they way back and went to Drei Kronen instead.

As I pulled up to the garden in the rear, Herr Straub came out and greated me warmly (I think he recognized the bicycle). I asked about his daughter, (who is in training to be a brewer) and he said she was in Switzerland teaching them how to brew Franconian beers.

I ordered some lunch and a Hefe-Pils (unfiltered Pils). 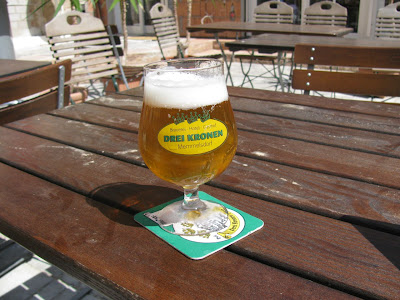 It was a good starter beer for the day, a nice bitterness and a little bit of character from the yeast.

Next it was off to Merkendorf, about 5 km from Memmelsdorf, mostly a gentle uphill. Merkendorf also has two breweries: Brauerei Hummel and (another) Brauerei Wagner.

You come to Hummel first. This brewery does a wide variety of beers, include a great smoked double bock for Lent. Their kellerbier is one of my favorites and sadly seems to be no longer available on draft in Bamberg. 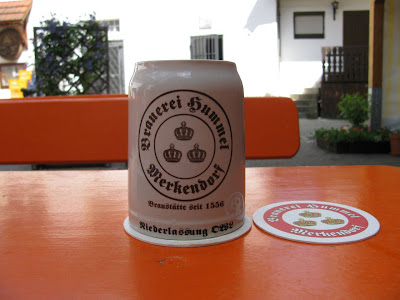 Off in the corner of the courtyard where the biergarten is I noticed a couple of bicycle wheels attached to the balcony. It turns out Brauerei Hummel hosts a bicycle club that is having their 100th anniversary next weekend. I wonder if they brewed a special beer? 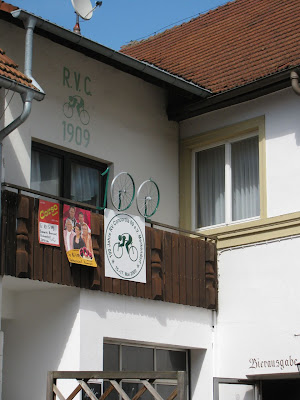 Looking around the courtyard some more I noiticed a sign I missed on the way in -- Maibock! So I had to have one. 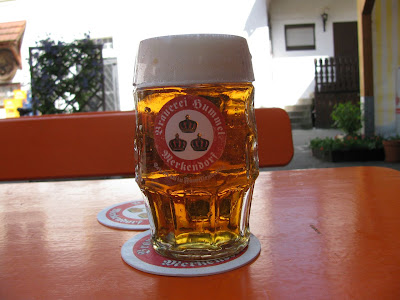 It was a nice Maibock, but I think the Mönchsambacher was better -- this one was a bit too sweet in the finish. But I had no problem finishing it.

Down the street a bit, around the corner from the local church is the second brewery, Brauerei Wagner. They have nice tree shade table out front, where I ususally sit in warmer weather. 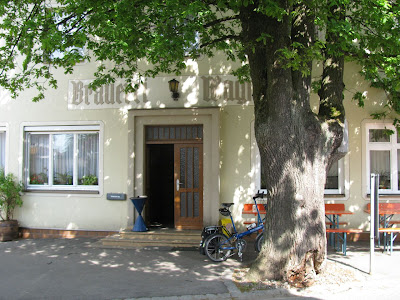 I went inside to the window and ordered an Ungespundetes. A nice refreshing beer after the long, tiring 300m ride from the last brewery. 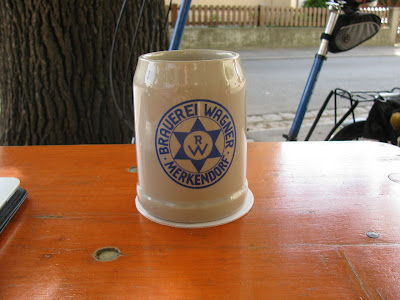 I particularly like the mosaic as you walk into to the brewey (having the same initials, FW) 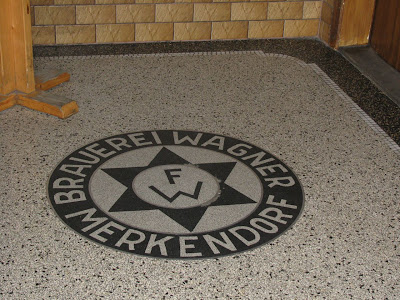 While there they were moving cases of beer from one side of the brewery to the other. I tried to get him to leave me so, but had no success. 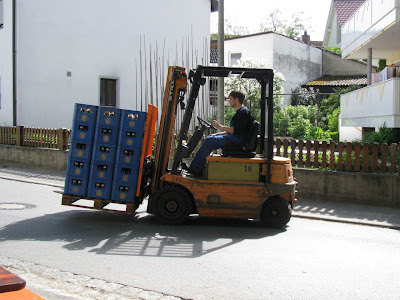 Well, I'm late for a beer, so I'll have to finish this text later, but I'll leave you with a couple more pictures... 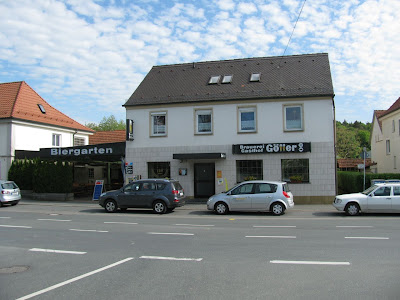 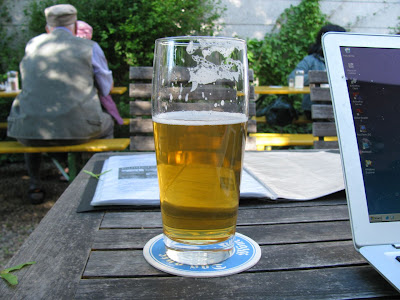 Hummel... great beer, great mugs. And yes, a very long, tiring ride around the corner from Wagner. Love your blog Fred - it's even better that I've been to these same places.