Wednesday found it still threatening rain, but it warmed up a bit in the afternoon so I went for a ride.

I rode along the Mhain river to the village of Viereth. There is a brewery here, Brauerei Mainlust but I am not a big fan of their beers, finding them a bit thin and weak. A bit inland from Viereth is Weiher, home of the much better Brauerei Kundmüller. But I wasn't ready for a beer yet -- I wanted to ride some more first, so I cross over the Main to the north bank and rode back towards Bamberg. Nearby was one of the many breweries named Wagner, this one in Oberhaid. Again, its not one of my favorites so I continued on to Dörfleins, home of Brauerei Eichhorn. 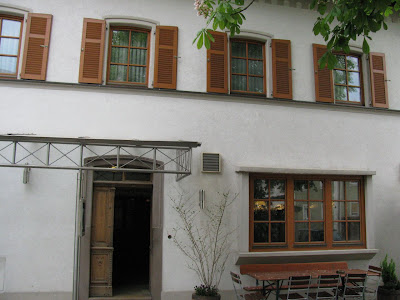 Brauerei Eichhorn, Dörfleins
They brew a very, very nice Kellerbier. When Stöhenkeller on the Stephansberg first opened this was one of their regular beers and I spent many a night drinking it.

It is asparagus ("Spargel") season here, so I had a bowl of "Spargelsuppe" to go with the beer. But I was so thirsty the beer was gone by the time the soup came so in order to be polite I ordered another. It was as good as the first. 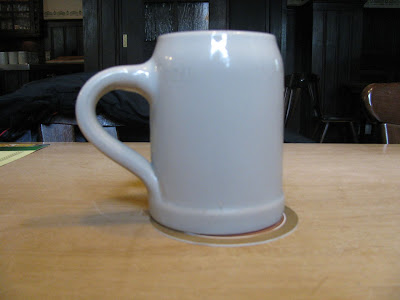 They use unadorned Krüge and the beer coaster I was given was for the weizenbier so I didn't put it in the picture. So you'll have to trust me on this one.

After the beer it was a short 9 km ride back to the apartment. I went at a little faster pace than usual -- though still slow by any rational standard -- so a short nap was in order.

After the nap I took a quick ride down to Mahrs Bräu for a couple mugs of "U" and I nice talk with Stephan Michel, the head brewmaster and future owner.

Total distance riden was only 30km but it was a hard day for this trip (since I still had homework to do).

Let me see if I got this straight, you passed 3 breweries and didn't stop for a beer? Although I can't blame you for Wagner in Oberhaid. Bad beer and besides, there will only be one Wagner for me.