The high speed lines are all in, so now the Thalys train takes less than an hour from Amsterdam Airport (Schiphol) to Antwerp Central Station. Not long ago that trip took nearly two hours. We need to get us trains like that! Antwerpen Centraal is one of the most beautiful train stations I've been in (LA's Union Station is also quite nice which is why it's a shame that almost nobody ever sees it). The facade you can make out in the back of the following picture is actually the wallpaper for my laptop. Anyway, the long distance trains arrive at the lowest level and I just had to take this picture and share it with you... 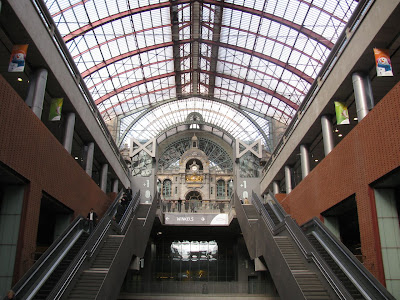 Deep down in Antwerpen Centraal Station
I am staying at a new hotel -- both new for me and newly opened -- The Etap Antwerp Central. Etap is Accor's (Ibis, Novitel, Motel 6) budget chain. In all the years I've been in Antwerpen Centraal I've never walked the length of it. It turns out there is a quite modern second entrance at the far end and the Etap is right around the corner. 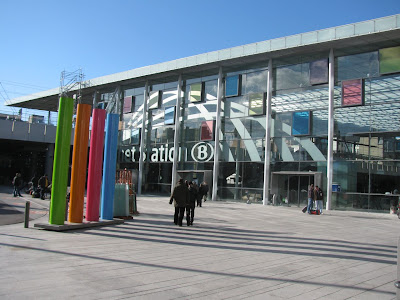 Modern South Entrance to Antwerpen Centraal Station
The hotel rooms are quite basic but serviceable. My only complaint is they want €2o per day for internet access. That is about half the cost of the room, which in my mind is crazy. So this is being typed at McDonalds with free WiFi.
After get situated it was off to the Kulminator. I already posted my first beer. The second was Kasteel Cuvee de Chateaux -- a 13% blend of 10 year old Kasteel with young Kasteel 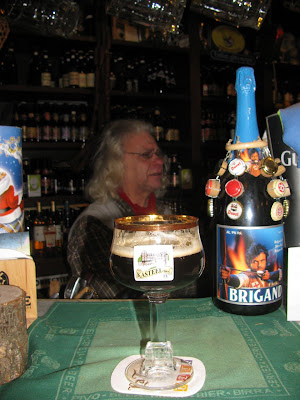 Kasteel Cuvee de Chateaux
I should know better to drink 13% abv beer when severely jet-lagged and on not much food. But it looked so good I had to try it. I was fading fast, but I decided to go for one more: La Trappe Quercus Quadruple. At 10%, this oak aged beer was a step down but still packed a punch. I'm not usually a big fan of "wood aged" beers but I think this one worked. You could definitely taste the oak but it did smooth the beer out. 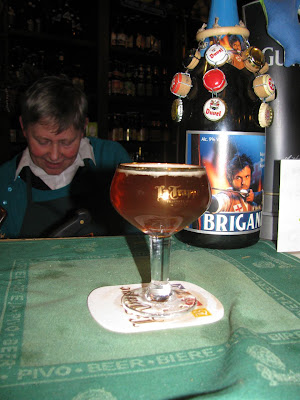 LaTrappe Quercus Quadruple
The quad was the nail in the coffin, so it was back to the hotel for 12 hours of sleep. More tomorrow...
Posted by The Mad Brewer at 11:33 PM