In the village of Davos-Monstein is what claims to be the highest brewery in Europe -- Biervision Monstein. Their tagline is "Last Beerstop before Heaven." However at only 1625m (5300 ft) it's not all that much higher than Denver, let alone the breweries in Colorado's Ski Country. Their flagship beer is called "Huusbier" -- just the local dialect for "house beer" and is a yeasty, unfiltered pale lager. I like it (but then I am usually somewhat beer deprived when in Switzerland) though other reviewers have called it "weird." To each their own. 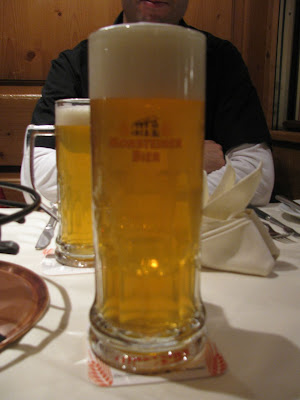 Monsteiner Huus Bier
It is served on draft at Restaurant Kulm in Davos-Wolfgang and they also use it to make their fondue. I'm not an expert at fondue, but I like Kulm's very much. It is slightly different every time I am there, with this version having small bits of ham and chopped spices. 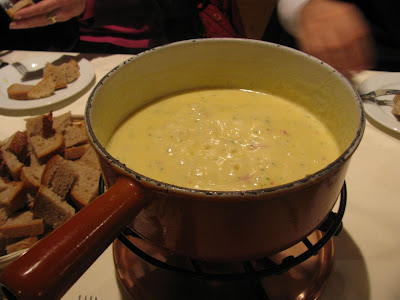 Beer Fondue
Posted by The Mad Brewer at 6:26 AM