Friday Afternoon at the Kulminator

Being self employed has it's advantages, as I get to travel more than if I had a traditional 9to5 sort of job. But the downside is I'm rarely completely "off duty" and so had to work on some client's problems in the morning. I had thought of heading to Brussels for the day but by the time the work was finished, it was a bit too late, so I decided to head down to the Kulminator and spend a peaceful Friday afternoon.

There were about a half dozen other patrons. The classical music was playing and the sun was shining (albeit somewhat half heartedly) thru the window. I ordered an DuPont Avex Les Bons Voeux and started reading my book ( The Girl with the Dragon Tattoo

by Steig Larsson). All was well with the world.) 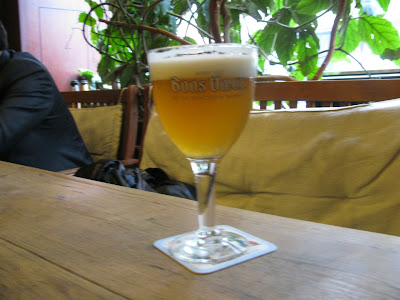 Another Avec Les Bons Voeux -- man, I love this beer.
A couple of chapters later it was time for another beer and I went with another draft choice, N'ice Choufee -- the winter seasonal from LaChouffe. 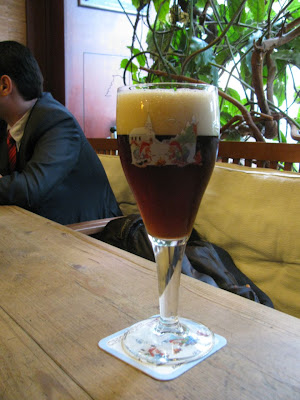 N'ice Choufee was very nice.
On the table was a tent card for Oud Beersel's triple, Bersalis Triple. Hey, advertising sometime works, so I ordered one. It was a nice triple, very drinkable but nothing earth shattering. Worth drinking of you come across it but not worth (in my mind) making a special effort to seek it out. 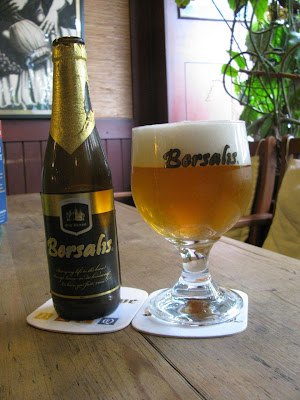 Oud Beersel Bersalis Triple
That got me thinking of triples, so next I had one of my favorites, St. Feuillien Triple. It lived up to it's memory. 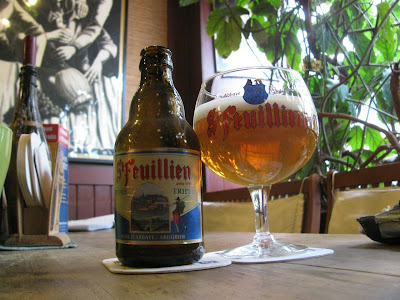 By now the crowd had started to pick up and others joined me at the table so I stopped reading. I also stopped taking pictures. Deciding to go with something a little aged, I went with a Chimay Blue from 2000. Across the table from me, Mark from Pittsburg went with a 1995. While both were good, I liked the 2000 better. I think they tend to peak at 10 to 12 years, so if any of you are hoarding 2000 Chimay, you might want to invite me over to help you start clearing out your stash.mas

Deciding to take a detour back to draft beers I next had the Carolus Christmas from Het Anker in Mechelen. A wonderful beer, too good to be just for Christmas.

I decided I should probably think about leaving. The dilemma was what to choose for the last beer? After much mental to-ing and fro-ing I ended up back where I started -- Avec Les Bons Voueux. Still delicious after all these beers.

However, I was undone when my seat neighbor Frank (from near St. Niklaas) offered to share a 750 bottle of something. I asked him to choose and he came back with a Vicarus Generaal from "Brouwerij" Dilewyns (but acually brewed at de Proefbrouwerij in Lochristi). It was dark and rich and in the Abbey Double style I think it has a bit more alcohol than is typical for the style. All in all a good end to a great day.

Tomorrow it's off to the beer festival!
Posted by The Mad Brewer at 1:21 AM