Friday we had an excursion planned. We wanted to end up in Strassgiech to have dinner at the Drei Kronen Gasthaus -- which is the tap room for Andreas Gänstaller's new brewery (which is actually the old Friedel brewery in Schnaid). They don't open to 4pm and the last bus back to Bamberg leaves just after 6pm so we'd have to take a taxi back.
On the way to Strassgiech (more or less) are the villages of Memmelsdorf and Merkendorf, each of which has two breweries. So with the correct timing, one could visit a number of breweries in a day.
So we caught a 10:00am bus to Merkendorf and arrived at Brauerei Wagner at about 10:30am. Luckily, they open at 9:00am so we were good to go. 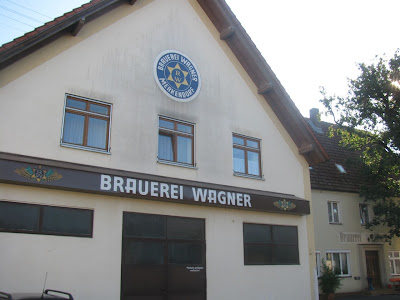 They had 6 beers on tap, a high number for the typical Franconian brewery. We started off with the Ungespundetes (basically a kellerbier), a Märzen and a their Festbier. All were very good. I usually drink the "U" when I am there on a bike ride but I think the Festbier was the best of the bunch -- a nice malty/roasty finish. 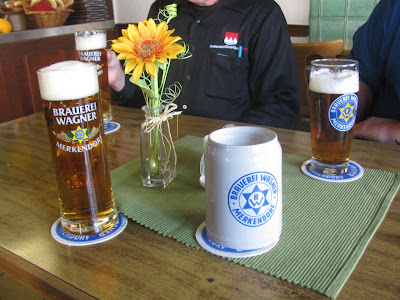 For the second round we had the Pils and the Dunkel ("Richard Wagner Dunkel"). The Pils was better than the Fässla Pils. It was very soft but could have used a bit more bittering hoops in the finish. The Dunkel was what you'd expect -- lots of Munich Malt character with just enough hops that it wasn't sweet. The beer we didn't have was a Weizen beer -- I don't know for sure, but often those are contract brewed at breweries that specialize in Wheat Beers. 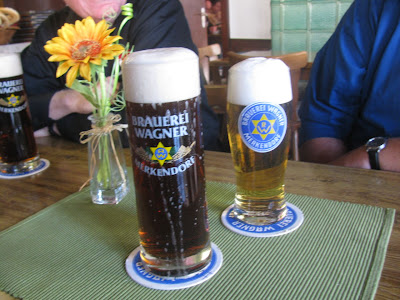 We had three and half hours in Merkendorf so we walked up the hill to the other brewery, Brauerei Hummel. They too had 6 beers on draft. For the first round we had the Pils, Kellerbier, Märzen and the Räucherla -- a smoke beer. 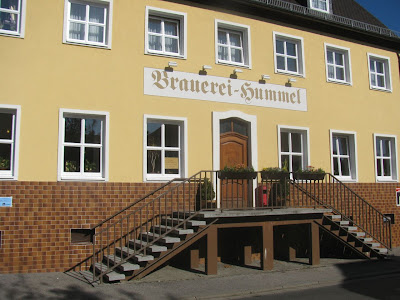 The Räucherla was the best of the bunch, not as smokey as Schlenkerla (but few beers are) but a little smokier than Spezial. The Kellerbier is usually my beer of choice on my bike trips but it had a few problems as did the Pils -- probably need a little more lagering to smooth out some of fermentation byproducts. We ordered lunch. I had a bowl of a wonderful potato soup and an order of Creamed Herring. Yum. 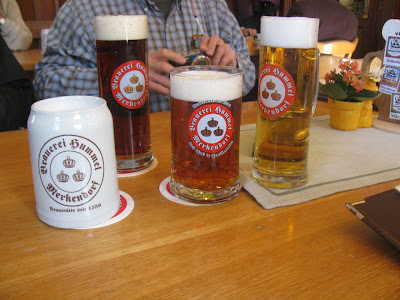 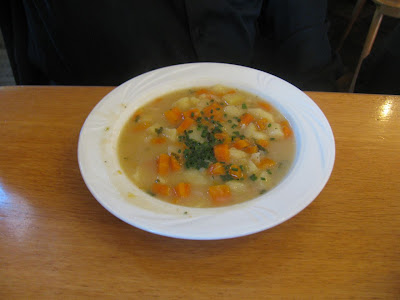 For the second round we had the Cowboy Schwarzbier (I have no idea of the story behind the name) and a bottle of their Festbier. The Schwarzbier wasn't that great but the Festbier was very good -- up there with the Räucherla as the table favorite for this visit. 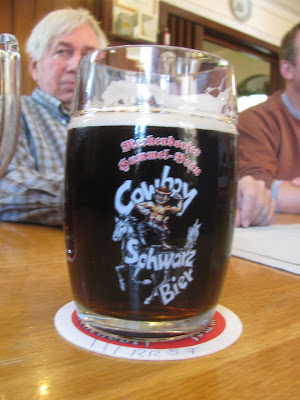 We headed back to the bus stop to catch the bus to Memmelsdorf (which was actually backtracking as we had passed thru there on the ride to Merkendorf). It is only about 3-4km -- and an easy walk as it is downhill -- but there number of beers at each brewery meant we might was well take the bus.
The bus left us off right at Brauerei Drei Kronen. The sun had come out and it was quite nice and warm so we sat on the Patio. This Drei Kronen has three standard beers and often a seasonal but we caught them "midseason" -- their bock would come on next week. So we made do with the Lagerbier (basically a kellerbier), the "Keller-PIls" (an unfiltered Pils -- used to be called "Hefe-Pils" but that confused people so they changed the name) and Stöffla ("Little stuff") their smoke beer. 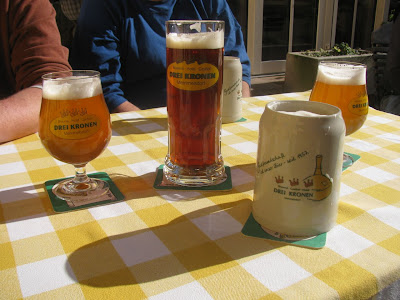 All three were great. It was so pleasant on the patio we all had a second beer and didn't have time to visit the other brewery in town, Brauerei Hoehn. We crossed the street to the bus stop and shortly our bus to Strassgiech arrived.
Posted by The Mad Brewer at 1:17 AM