I wanted to go to Earl's Court -- the site of the GBBF -- in order to check in and find out if I when I am working. I remembered there was a Wetherspoons pub near the Baker Street station and it was on the way, so we stopped off for a "freshener." 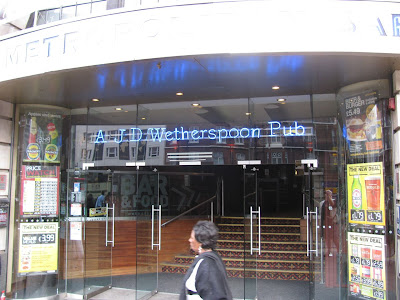 The Metropolitan Bar next to Baker Street Station
The pub looks as if it may have been a theatre -- you come into a lobby and then go upstairs to the large room. I had a RCH Double Header, Tom the Arundel Summer Daze and Luis had a Spinning Dog Mutley's Revenge. The Summer Daze was the best of the bunch, even thought it is fairly pale, there was a nice touch of roast malt in the finish. 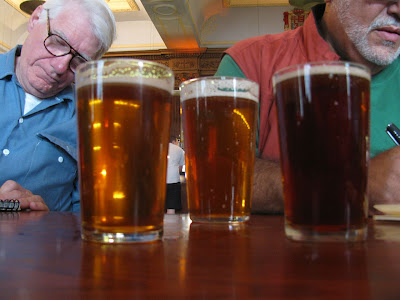 We walked down to the Edgware Road tube stop (which actually was hard to find) and caught a train to Earl's Court. I regestered, got my badge and went down to the floor, where they were still building the booths and putting away beer. I found the man I needed to talked to (who said come Tuesday) and so we headed back up to the staff area. As we entered the room, a voice over the PA system announced "The Volunteer Arms is now open."

The Volunteer Arms is the staff only pub at the GBBF. Beer there is free for all the workers (who are all volunteers) and ofter there are beers that are not available to general public. They also sae casks of the award winning beers for the staff party the last night -- so they staff can taste them.

So techinically I had worked (had to get my badge!) and Tom and Luis were my official entourage, so we went and a couple beers.

I saw they had the Kelburn Brewery Goldihops, a beer that has won lots of awards. It is brewed by Derek Moore and one GBBF he had the room across the hall so we got to know each other a bit. The beer was as good as it ever was. Tom and Luis had the Arbor Ales Oyster Stout -- and it had some of those same flavors we like in the Porterhouse Oyster Stout. Since I had actually worked, while they had just entouraged , I went back for a 2nd half pint, the Buckyard Brewery Hobs Hole. Very nice.

We decided to go back to the Bree Louise to try the beers we'd missed the first time around. 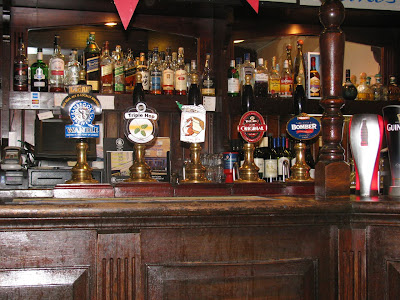 The bar at Bree Louise 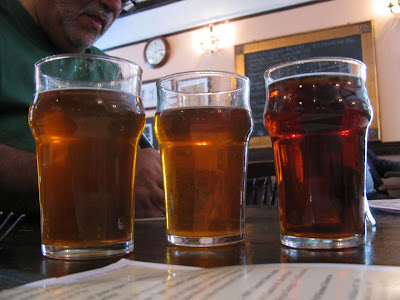 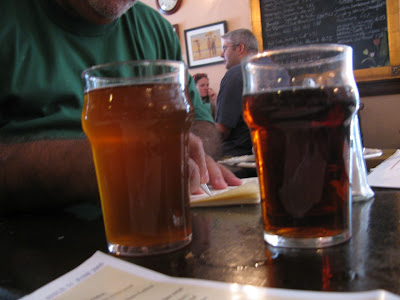 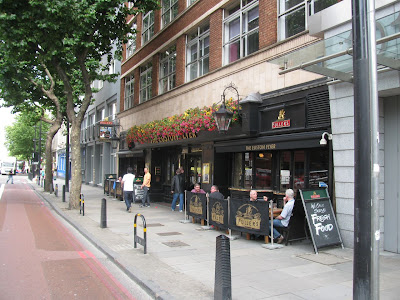 The Euston Flyer, across from the British Library 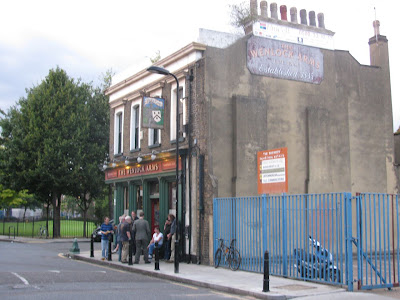 The Wenlock Arms
Posted by The Mad Brewer at 11:00 PM