We met at 10am as usually and thought about where to go. We figured if any pub was open early, it might one at a train station, so we wandered over to Euston Station, home of the Doric Arch (formerly the Head of Steam). We got there just about 11 and they were locked up tight. The pub is right by the bus station and there was an information booth. I though, "hey, this is valuable information for us" and asked if he knew the pub hours. The nice uniform gentleman just smiled and said he usually opened at 12. After thanking him, we walked across the street to the Royal George, a pub we new nothing about, except it was open and there was a Cask Marque sign on the door, which meant they had some well cared for Real Ales. 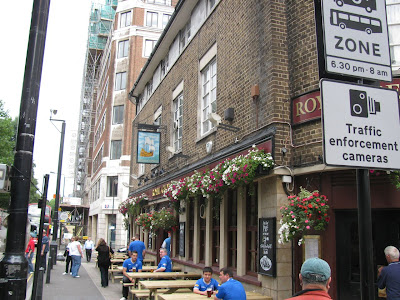 The Royal George, across from Euston Station, London
The blue shirts are all fans of the Chelsea football (i.e. soccer) club who had a match later in the afternoon and these fans were preparing for the game with the British equivilent of "tailgating.

We checked out the taps, and I had a Young's Waggle Dance (a honey beer) and Tom and Luis both had Greene King IPA. 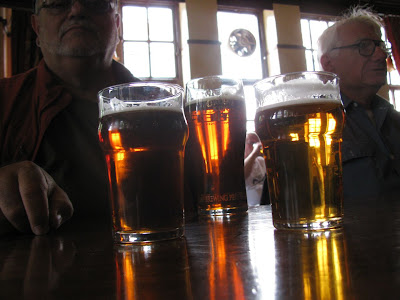 The Greene King IPA is really more of a bitter than even the English version of an IPA, but it is a very consistant drinkable beer from a fairly large brewer (They also brew Abbot Ale and Old Speckled Hen, which are easily found in the US). Greene King in my mind sort of like Sam Adams in the US -- not a craft beer, but well made and widely found and it will do in a pinch if nothing more interesting is available. The Waggle Dance was very light in color and flavor and didn't really have much honey character. But a good starting beer.

We nursed the beers until noon and walked back across the street to the Doric Arch. 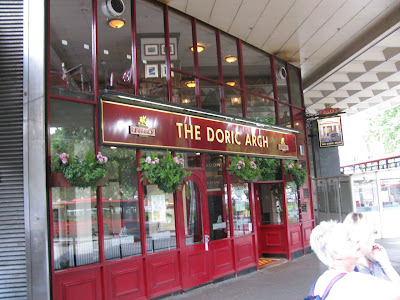 The Doric Arch, Euston Station, London
It got to be about 10 past noon and we were about to give up and try another place when a man rushed up and started unlocking and appologized for being late. After the appology, it would be rude not to have a beer so went in and upstairs (the pub is one floor above ground level -- 1st or 2nd floor depending on if you are Origin 0 or Origin 1).

When it was the Head of Steam it was a freehouse but about 3 years ago it was bought by Fullers. However, Fullers seems to leave pubs somewhat alone and thie Doric Arch still has many guest (i.e. non Fullers) beers. I noticed they had Kelham Island Pale Rider, which was the Champion Beer of Britain in 2004 (a year I attended the GBBF) so I had one of those, a full pint, no less.
Tom had a Gales HSB (Horndean Special Bitter, now owned and brewed by Fullers) and Luis had a Fullers Discovery, their pale summer beer.

The Pale Ride was nicely hoppy (for a British beer) and a bit stronger that is typical at over 5%. The HSB was a nice, well made special bitter and the Discovery was a refreshing summer ale but nothing special to write home about. 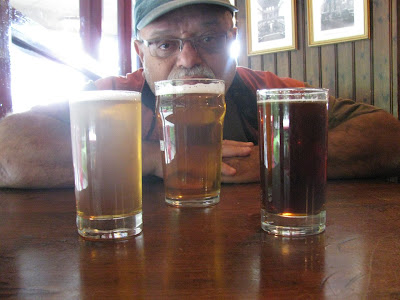 Fullers Discovery, Kelham Island Pale Rider, Gales HSB
I enjoy sitting by the window of the Doric Arch and watching all the people walk by, rushing to and from the train station. So I talked Tom into having another beer. He had one his old favorites, Fullers London Pride, while I took a chance and had a Saltaire Sub-lime Blonde. The latter is a blonde ale with lime flavor added. 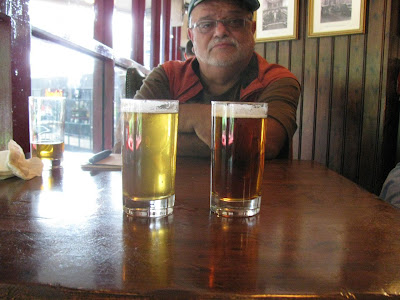 Saltaire Sub-lime Blonde, Fullers London Pride.
The Sub-line could have been really bad, but it wasn't. It had enough lime flavor so you knew it was therem but not so much that it tasted like an alco-pop. But a half pint was more than enough.

We had heard of a pub near Euston called the Bree Louise. Its only two short blocks from the station and is now, I think, my favorite pub in London. 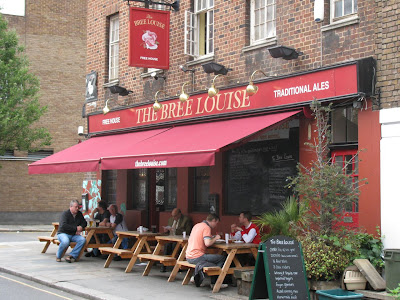 The Bree Louise, near Euston Station, London
They are catering to real ale crowd in a big way. They have 11 casks that are gravity fed and another 5 beer engines for an amazing 16 real ales. In addition, they have 8 ciders on draft. Oh, and CAMRA members get a 50p discount on a pint, a 25p discount on half pints. (I'm not sure they really believed we were members until we showed our cards -- not too many Yanks are)

I started off with a Red Squirrel White Mt AIPA, Tom had a Sambrook's Wandle (a beer brewed in London) and Luis had a Thwaites Original. 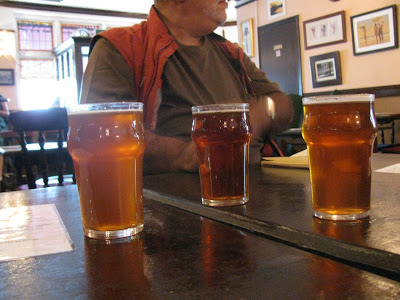 Red Squirrel White Mt AIPA, Thwaites Original, Sambrook's Wandle
The AIPA part of the White Mt name was, as I figured, "American IPA" and this beer would hold its own with any West Coast (US) IPA. American hops but still a British malt and yeast profile. Very nice. The Wandle was a nice refreshing golden ale and the Original was fairly malty for a beer that is only 3.6%. It also finished very clean and dry.

While drinking this first round we all ordered the Ploughman's Lunch with a nice sharp Stilton cheese. It was a very nice ploughman's -- generous portion of cheese and lots to accompany it.

Round two was a Green Jack Big Dog for me, a Green Jack Canary Pale Ale for Tom and a Thwaites Well, Well, Well for Luis. We were enjoying the beers so much, I forgot to take a picture.

Since they had all those ciders we decided on a round of those. I chose the Gwatkin Farmhouse Perry and Tom went with a Welsh cider with the unpronounceable name of Gwynt y Ddraig Draught and Luis had the classic Westons Old Rosie Scrumpy. 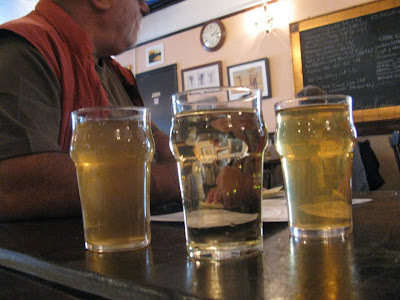 Weston's Old Rosie, Gwatkin Farmhouse Perry, Gwynt y Ddraig Draught
The perry was very, very pale and totally transparent. It tasted of crisp pears and was sweet in the finish ( a little sweeter than I like). The Welsh cider was very dry and the Old Rosie scrumpy (unfiltered cider) was medium dry.

After the ciders it was really time for a nap but since Tom had not yet been to the Porterhouse, we decided to head down to Convent Garden so he could get his fix. On the way back to Euston Station we passed these interesting bike racks and I had to take a picture. I do think I've seen more bicyclists in London this trip, but Tom says it's just me noticing them. Oh well. 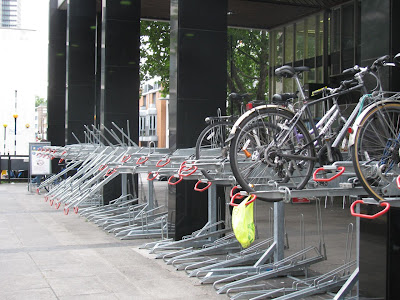 On the way to the Porterhouse we found another pub that had been recommened to us -- an one Luis and walked by on Wednesday -- Harp. It used to be a tied house (corporate owned, often by a brewery) but is now an independent freehouse. 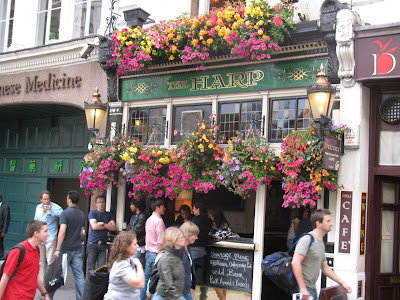 The Harp, near Covent Garden

What attracted me when we walked by on Wednesday was Dark Star was listed among the breweries we carried and I have yet to have any of their beers this trip. The pub is long and narrow a has another room upstairs (which I didn't check out). 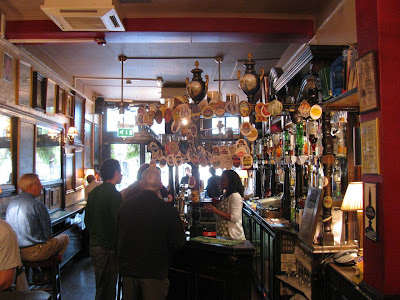 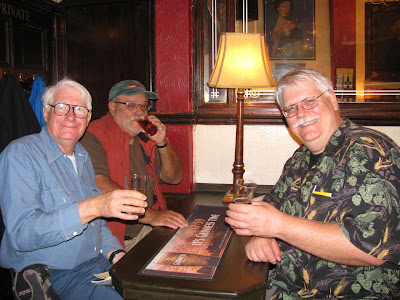 Us, drinking beer.
Tom got served first, so he got the Dark Star Hop Head. I had a Newman's Last Lion of Brittian -- a beer and brewery of which I have not ever heard -- and Luis a Timothy Taylors Golden Best. 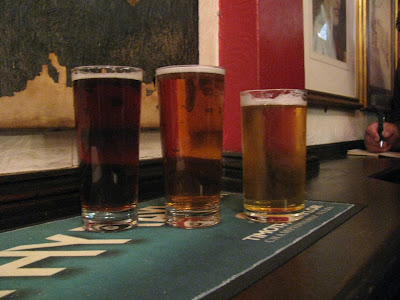 Newmans Last Lion of Britain, Dark Star Hop Head, Taylor Golden Best
I really thought Tom would go for the Taylors as he likes thier beers, but in the end it was good because I would have missed a very nice beer in the Last Lion. It was well balanced between maltiness and hopiness. The Hophead was its usually hoppy fine brew, but while once it was perhaps the hoppiest British beer I'd had, it is no longer the champ. But still a very nice drinkable beer. The Golden Best had that Timothly Taylor house flavor and was a nice bitter, but it sort of paled in the (unfair) competition of the other two.

We got to the Porterhouse and it was packed. They were showing a rugby match between South Africa and New Zeeland and we were hard press to find a seat. For a switch I got the Wrassler's XXX Stout while Tom and Luis had the Oyster Stout. I had never tasted the two side by side and the Wrassler's was very similar with some (but not all) of the same flavors I thought might be the oysters. With the game on screens in every corner of the pub, it wasn't really conducive to conversation, so we finished our beers and headed towards home.

While on the bus, we realized it would continue down to what has become our local pub, the Masque Haunt. So we got off there and had dinner and a beer. Luis passed on a beer and Tom and I had different beers from the Itchen Valley Brewery -- I had the Nelson's Revenge and Tom the Godfathers. 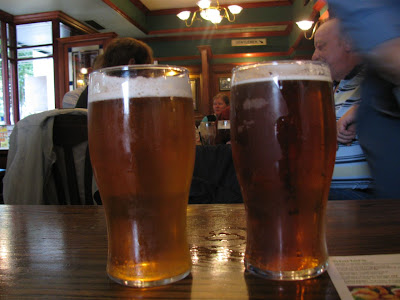 Itchens Valley Nelson's Victory and Godfathers.
Both were fine but unremarkable. But then again, maybe it was us -- it had been a long day.

A couple blocks down from the Masque Haunt is a nice Fuller's Pub called the Artillery Arms. It is very much a local pub but friendly and there is always a good pint of Fullers to be had. We all decided on the ESB and were surprised at how it now didn't seem to be hoppy at all. I think Britain is being infected by Homebrewer's Disease -- "there is no such thing as too much hops" -- because there are far more hoppy beers than our last visit to the GBBF 3 years ago. But the Fullers ESB was still very nice and remains a classic. 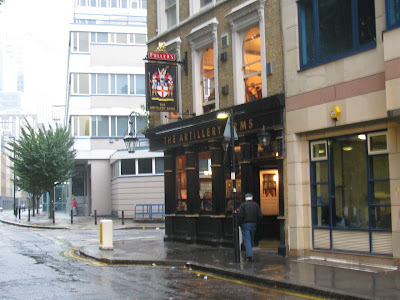 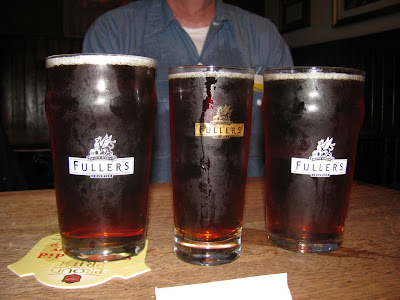 Two pints of ESB bookending a half pint of same.
Posted by The Mad Brewer at 11:40 PM

I think the pictures where I relaxed so much beer out recalling all I have in my house!