After doing my morning chores (updating the blog and doing actual, real work) I decided to check out a brewpub names TramCo. It closed a while back but was reported as having re-opened.  After successfully  negotiating the Dublin bus system (the bus system is great but finding the right bus stop can be a challenge of you're unfamiliar with the area) I arrived on site. Not only was it closed it had that deserted sort of look that said it hadn't been open in a while. Oh well, on to other places...
Having an afternoon to kill, I defaulted to the Porterhouse in Temple Bar (the original).  I was hoping they had a new guest cask on but it was still the Kelvick Gold. So I had a pint of their cask ale, TSB (Turner Sticklebract Bitter) brewed with New Zealand Sticklebract hops.
It was a nice English style cask bitter, and just the right temperature. As the first beer of the day it went down way to fast.

Next up I decided to try the Plain Porter near the start of the day to give it a fairer test.

While it was much better than my quick pint the night before, it still comes in third place of the three porters and stouts they brew. Don't get me wrong, it is a fine beer and anyplace else it would be a winner, but I wanted to slap my forehead and shout "I could have had an Oyster!"

I apologize for the following picture but it was the best I could do under the circumstances. WeiserBuddy is the original name of the light lager now called Chiller. After about literally 10 pounds of paper sent by lawyers in St. Louis, this is just about all that remains of the name,

I did hang around for a couple of Oyster Stouts, but I won't bore you with pictures.
I decide to pay a return visit to the Bull and Castle to see if they had a new cask on.  They call themselves a "Gastropub" which means they picture themselves as a fancy restaurant first. This time when I went in there was somebody guarding the portal.  I noticed all the tables had reserved signs on them. When I told her I was going to have a couple of pints and maybe a bowl of soup she said I'd have to sit at the bar. Now the bar there has this rickety, uncomfortable stools and I said I'd really rather sit at a table. "They are all reserved," she sniffed. Now it was a Friday so I can understand tables being reseved but it was 3:00 in the afternoon! So I sat at the bar and ordered my pint of Buckley's Golden Ale (them being between casks). 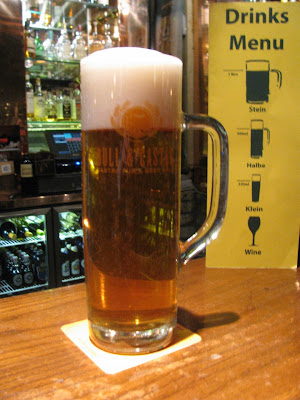 This is a very interesting beer. It is only 3.9% alcohol but is very tasty with a nice hop finish. Not too much malt in there but that is to be expected. I read later that this is their most popular beer during the day. I can see that -- a pint with lunch and you wouldn't need a nap when you went back to work. They have a nice bottle selection as well and I was all set to try some after the Buckleys, but a couple
of different couples came in in the meantime and they were seated at "reserved" tables with no problem. I was sort of in a pissy mood from the rickety stool, so I decided if I wasn't good enough for their business, I'd go elsewhere. That is why in general, I hate "gastropubs."

I wandered over to the Cobblestone pub in the Smithfields district. I had been by on Tuesday but they didn't open until 4pm.  By the time I got there it was just past 4pm and I think I was the first customer. 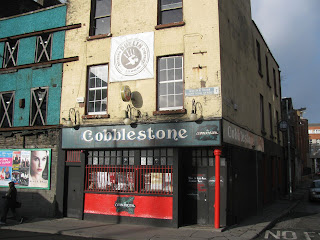 It turns out they used to be the unofficial taproom the for now departed Dublin Brewing Company, which was located nearby.  I noticed they had three tap handles with names of former DBC beers but with the label "Big Hand Brewery." The one I wanted, D'Arcy Stout had the handle covered so I had the Revolution Red.

The beer looked nice but either the keg or the tap was bad -- it was very sour. When I next had internet access I did some research (if it it's on the internet it must be true, right?) and found out they don't actually brew but just import beers and relabel them, The Revolution is supposedly Bombardier and the D'Arcy Stout is really Young's Double Chocolate Stout. Oh well.
So I headed over to L. Mulligan Grocer. When I was there on Tuesday night it was fairly quiet. Being Friday at about 5:30pm it was now packed. Turns out they also have a very interesting menu with lots of beer cuisine -- but they are definitely not a "gastropub."

The cask beer had changed, it was now Dunvargan Brewing Block Rock Stout, which I had not yet tried. So I did. And was glad I did.


I guess you don't stay in business long if you don't brew a decent stout.  This one was excellent with a nice hop balance. After that it was another repeat -- Trouble Brewing Dark Arts Porter. Actually I think I had two of those. By then the weather was starting to turn (wind and rain) so I headed back to the hotel.
I think I will come back for dinner on Saturday, my last night. This place ties with the Porterhouse as my Dublin favorite. The Porterhouse has a sentimental advantage but L. Mulligan Grocer is up there as one of my favorite all time places to drink beer.