The Rest of Day One in Dublin

At the end of the last episode we left our intrepid beer drinker at the Poterhouse Brewing Company in Dublin...
The Porterhouse has been open for around 15 years and the pub had a comfortable lived in feel. Quite a contrast to the trending pub in London's Covent Garden, but more on that later... 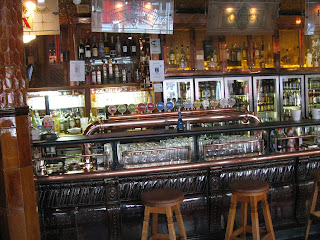 After the Oyster Stout I really wanted .... another Oyster Stout. But I didn't need to travel all the way to Dublin to tell you the Oyster Stout was a great beer. So I thought I'd try one of their other stouts, the Wrassler's XXXX. It is darker than the Oyster, a tad stronger and is much more a traditional stout.


It is very roasty and full bodied -- but not too heavy so you could drink quite a few. Anywhere else this would be a flagship beer.
I still wasn't ready to leave, so I though I would try one of their other Irish guest beers (I say "Irish" because one of the guest beers was Sierra Nevada Pale Ale!). The had the Trouble Brewing Or. This is a fairly new microbrewery (founded 2009) which had good reviews in the research I did before the trip. So I gave it a try...

It was very fruity (in a good way) and had some American hops in there to give it a bit of a bite. As it warmed up (this was a keg beer) some nice butterscotch notes came thru. It probably would have been better before the stouts but waiting two beers for my first Oyster Stout would be asking too much.
I could have stayed the rest of the afternoon and worked my way thru the other 8 Porterhouse beers and the 3 other Irish guest beers but I need to save something for later. So I walked a couple blocks to the Bull & Castle, which came highly recommended by some friends.
The first thing I noticed was this wonderful lighted sign from the Belgian Trappist Brewery, Westmalle:
This sign causes me to contemplate breaking several Commandments: I covet this sign, I want to steal this sign, I might kill for this sign, etc, etc. Temptation resisted, I ordered a beer.
I ordered an IPA -- which here means "Irish Pale Ale" from Galway Hooker Brewing. The Bull & Castle must have started out as a German bar as their beers came in three sizes: Stein (1 liter), Halbe (half liter) and Klein (third liter). Except for the stouts which came in "Pint" or "Glass."
Jet lag was starting to kick in, so I can't give you much of a description -- it was tasty and not too hoppy -- I definitely will try another.
I decided to have one last beer and asked the waitress to recommend one of the two Red Ales. She said go for the Castle Red from Franciscan Well Brewery.
My tastebuds were asleep by then and the rest of my body was soon to follow, so I will have to go back and try this one again to give it a fair tasting. It was back to the hotel for a nap which turned into 12 hours of sleep.

On the way out I saw one of their beer fridges and had to take a picture. 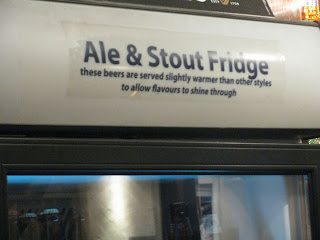 Tomorrow -- the Guniness Brewery and more.
Posted by The Mad Brewer at 2:11 AM