This will be a real short post, as I spent most of the day drinking at the Porterhouse and watching 6 Nations Rugby. Not much for pictures.
I started off walking over to Parnell Square. On the way in to town from the airport, the bus passed this pub.
Not far from the homebrew shop in LA where our club is based is a pub of the same name.  It is the local for some "mates" so I thought I owed it to them to check it out.

It was just after noon when I walked in. The bar was filled with people who looked like they may have been merged into their stools. Heads swiveled and all had the look of "what is this damn tourist doing my boozer." I've seen that look in many pubs in many countries.

The inside wasn't fancy but comfortable feeling of a old favorite sweater or pair of shoes. In the back room that had a fire going, so I ordered a Beamish went to the back room. (It was cool out but not so cold I wanted to sit next to the fire)


Beamish is now owned by Heinekin and is now brewed at the Murphy's brewery. It hasn't been available in the US for a while, so I thought it worth a try. It was an OK stout but won't be anywhere near the top of my favorite stout list. Not quite as roasty as Guinness. But I wasn't really here for the beer.

After finishing my Beamish I wandered over to (you guessed it) the Porterhouse for lunch and a beer. Or two. Or three. After I couple of Oyster Stouts I realized there was one Porterhouse stout I hadn't tried: The Celebration Stout. This is their "Imperial Stout" -- at 7% it is strong for an Irish Stout but most American Imperial Stouts are quite a bit stronger. The Celebration only comes in bottles and I asked if they had any. They did.

The alcohol was noticeable and it had a much stronger roast/burt flavor than the other stouts. I liked it, but one was enough. So I went back to the Oyster Stout. By this time the rugby match (Ireland vs Italy) had started. Ireland one 13-11 in a fairly exciting finish (we would say a field goal in the last 3 minutes but I'm not up on all the rugby terminology).
One of the guest taps there has the green Sierra Nevada logo. I was talking with the manager Kenn (who has treated my very well this week) and he asked if I had tried the Sierra Nevada? I said I drink the draught ale often at home and it is one of my favorite beers. "Oh no, this isn't the draught ale, it's the Northern Hemisphere Harvest Ale."  I couldn't resist that, so I had one: 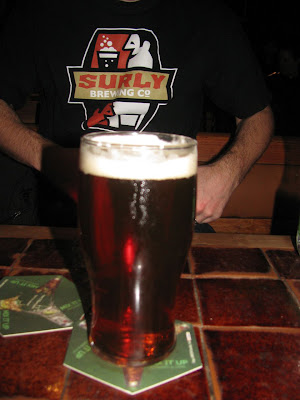 After a week of fairly mildly hopped beers (by West Coast US standards) the hops here really hit me in the face. It actually took me quite a while to finish,  as it took me a while to re-aclimatize my palatte to such a massively hoppy beer. But finish I did and then it was back to the hotel to pack to get up early (you can't "crack of dawn" as dawn is about 8am this time of year!) for my flight home.
Posted by The Mad Brewer at 9:42 PM