I have a warm spot for Klosterbrau. It was the first place I visited on my first trip to Bamberg. It was October and they had a bock and it was simply marvelous.
Their kitchen is pretty good, so I headed there for beer and dinner. 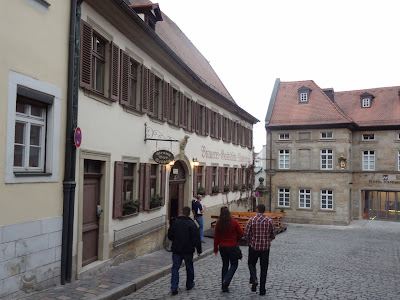 The "signature beer" is the Braunbier ("Brown Beer"). It is basically a darkish amber lager. The other regular beer is the Schwärlza or "Little Black") -- it is basically a dunkel, again on the darker side. 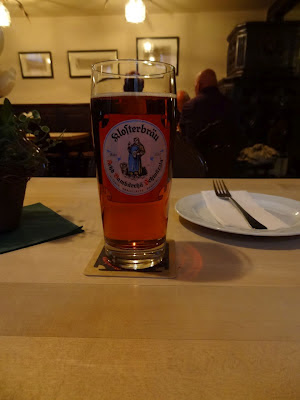 I ordered a Braunbier and the "Bierhaxe" -- basically a smallish schweinehaxe with a beer sauce.  The Braunbier was very disappointing. In fact, if I hadn't ordered food I might have just left. It had an off flavor that was hard to describe. Once I got past that there was the flavor or rancid butter. That says to me INFECTION! 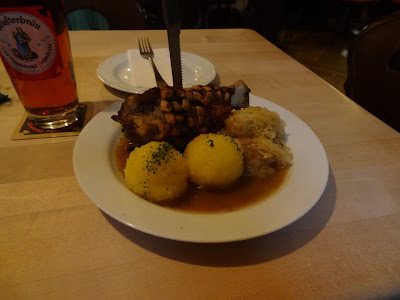 On the other hand, the Haxe was very nice. The skin was crispy and the meat tender There was the right amount of sauce for the kloss.

My plan was to have a Schwärzla but I couldn't stand the thought of another beer there, so I left when I was  done eating.

I had an appointment with some people at Stöhrenkeller on the Stephansberg so I headed up there. It turns out they were all early too, so it was good.

One person hadn't eaten so they ordered a Schinkenbrot ("Ham Bread"). This was a local cured ham on a dense buttered pumpernickel type bread.  We were all offered a piece -- it was delicious. Even though I had just eaten a haxe, I almost ordered one. Went with beer instead... 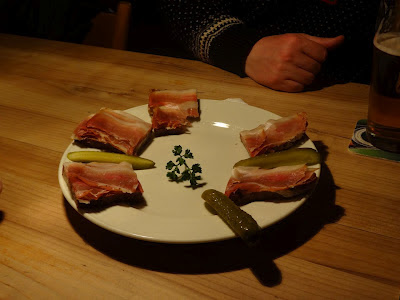 The Schlenerkla Lagerbier is still rare enough for me that I started with that. 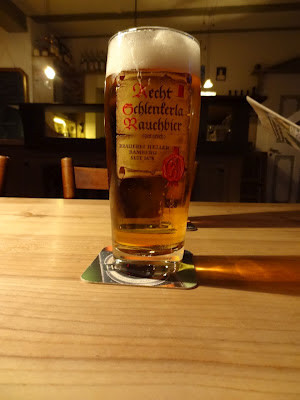 While it was still good, I don't think I liked it as much as the other day. To me, it was just missing an extra "oomph" I think it would be much better unfiltered. Of course, it is only 4.3% alcohol so you can call it a session beer.

I switched to the Drei Kronen (Gänstaller Bräu) Kellerbier. That was just what the doctor (who was sitting next to me) ordered. 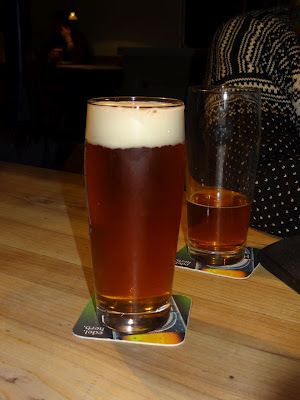 The rest of the evening would be boring to see. Glass after glass of kellerbier, so I'll just leave it at that.
Posted by The Mad Brewer at 7:32 AM

do you happen to know what sort of wood they use for those table tops? beautiful stuff.