Day Three in Bamberg -- The Day of the Bockbier

It wasn't planned that way, but I ended up drinking four bock beers, all over (or very close) to 8%.
First stop, Cafe Abseits where I was happy to see the Schlenklerla Eiche was still on draft..

It was lunch time and that means a Schnitzel Sandwich.

Gerhard Schoolman joined us and brought out some beers he has been saving for beer tourists like us. First up was the Greiss Bock from nearby Geisfeld. Wonderfully hoppy.
Next up was Mönchsamber Weihnachtsbock (Christmas bock). Much more on the malty side and very good. I am sorry I am going to miss the tapping of their new Weizenbock in a couple weeks. 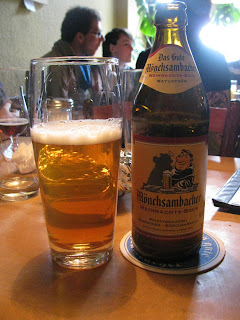 By the way, check out this commercial they made as a test project (don't think it has ever been shown on TV)
After three bocks it was time for a walk, so we headed down to Mahrs Bräu, where another bock waited. On the way you pass Gaststätte Wunderburg which has a few interesting beers on draft, my favorite being the Wagner (Kemmern) Pils. They also have Stegauracher Hausbräu Lagerbier (though it is probably contract brewed at Brauerei Göller in Zeil am Main) and St. Georgen Kellerbier from Buttenheim. We didn't stop in for a beer though -- but you should next time you walk by. 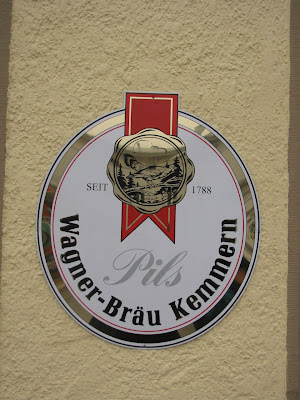 Soon we came to Mahrs Bräu
It was early for the U so my father had a Helles from the barrel and I had Der Weisse Bock (which is a bottled wheat bock).  I found the helles a bit bland but the weizenbock was wonderful. Dark and malty with just a bit of spiciness from the wheat yeast. If I hadn't already had three bocks I would have had another.
While we were waiting the U was tapped so I had to have one.
It was time to think about dinner, so we stopped at Schlenkerla on the way home. We started in the with Märzen (instead of the Fastenbier). When you "ease" into the Märzen by starting with the Fastenbier the smoke isn't as intense, and I wanted the full "hit you over the head" experience.
I decided to go with the tradition Franconian Sunday Dinner: Schweinebraten with Wirsing and Kloss.
By that time I was ready for a nap so we headed back to the apartment where the plan was to open one of the special beers our landlord left for us. But the nap turned into the best nights sleep I've had this trip. Lots of bock bier and walking will do that to you, I guess.
Posted by The Mad Brewer at 1:14 AM

why no herren pils from keesmann while you're on that side of town?

It was Sunday and they were closed. Otherwise we would have stopped.