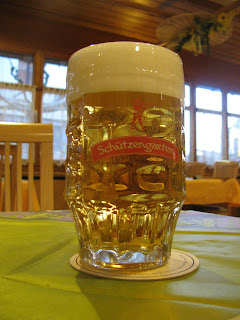 A Schützengarten Lagerbier. Schützengarten is from St Gallen (which has the oldest existent records of monastic brewing dating back to the 800's) and is one the largest (if not the largest) remaining independent breweries (the rest being bought by Heineken or Carlsberg). This is a fairly standard helles lager -- if in Bamberg I wouldn't waste the liver cells for it but around here it is a decent beer. They do brew some interesting beers (some unfiltered lagers and a nice dunkles bier) but they seem to be rare on draft. So I make to with the Lagerbier. The other "local" beers are much, much worse.

I won't show you pictures of my 2nd (and 3rd and so on) beers because it would be much the same picture.

The rest of the trip looks to get interesting. I have a train reservation to Bamberg on Friday but it looks like there may be a rail strike in Germany. My father arrives in Frankfurt Friday morning so if there is a strike I'll have to rent a car, drive to Frankfurt Airport to pick up Dear Old Dad and then head to Bamberg. A serious slice out of my beer drinking time.
Posted by The Mad Brewer at 10:10 PM