Tuesday was one of those days that was so nice I wish I had my brought my bike. We decided to head up the Kaulberg to Brauerei Greifenklau
They have a very nice terrace out back with a great view...

A few years ago the beer was very inconsistent but is regularly pretty good these days and today was no exception. 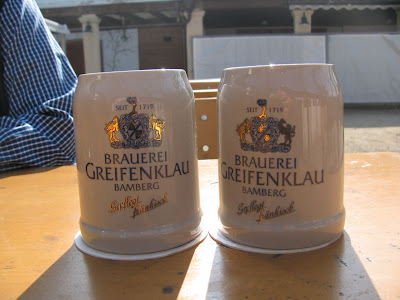 Greifenklau Lager (take my word for it)
I had gotten a message from Hans-Ludwig Straub, the owner/brewer of Drei Kronen Memmelsdorf that he had a new Fastenbier, so we took the city bus (Line 7) out to Memmelsdorf.

The Fastenbier was tasty but very filling (which I guess is the purpose if you are fasting). I'd like a bit more bitterness but I say that for just about every beer around here.
For a second beer I had the standard (as opposed to seasonal) Keller Pils. Herr Straub came over while we were finishing the Fastenbier and told us that his daughter was now doing all the brewing except for the seasonals. I hope Herr Straub doesn't take this the wrong way, but I liked the Keller Pils more than in the past -- it was a bit crisper in the finish. I'd say the brewery is in good hands.
After catching the bus back to town, we rested a bit, caught up on email and scoured the web for news on the impending rail strike, then decided to walk up the hill to Spezial Keller for dinner and some beers.

The mugs and glasses all had new Spezial Keller logos (at least I don't remember them from last year but the memory is the first to go, somebody said)

After a few beers we walked down the hill and paused part way at Stöhrenkeller to see what they had going. It was 9:30pm on a Tuesday night and the place was packed. So I guess business was good. We had a Keesmann Josefi Bock (their spring book) and the Eichhorn Kellerbier from Dörfleins (the glass says "Pils" -- ignore that). The Josefi bock was too drinkable, the half liter was gone in no time. 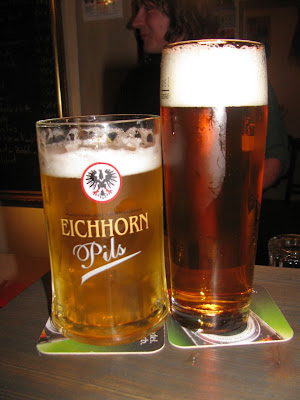 Eichhorn Kellerbier and Keesmann Josefi Bock
We had to pass by Schlenkerla on the way home but managed to resist a nightecap after our nightcap.
Posted by The Mad Brewer at 2:34 AM