Went to Restaurant Kulm in Davos where they usually have the Monsteiner Huusbier on draft.  I was (pleasantly) surprise to fine the Wätterguoge ("Salamander") instead. I've only had the Wätterguoge in the bottle and the draft was much better. It has a very slight smokey note and is about the closest thing to Spezial Lager that I have tasted. At least one of the brewers in Franconian trained so that may be no accident. 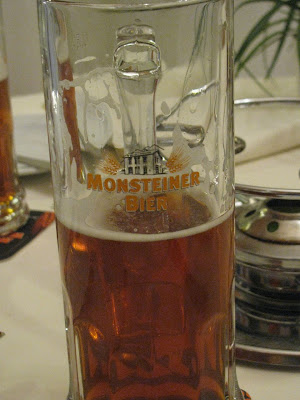 The beer fondue was also made with the Wätterguoge and was very good but it is hard to compare it to the Huusbier version I had last year, as the fondue recipe itself has changed (more herbs and other stuff in it this time).