The flight was uneventful,  just long. Of course I couldn't check into my hotel so I wandered around, drinking way too much coffee. After checking in, it was off to the Porterhouse in Temple Bar 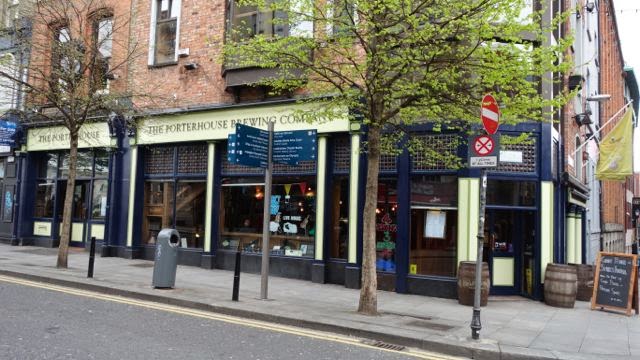 This was the home of the original brewery, but they long since moved the brewing to the suburbs where they have much more room.

I started with the Oyster Stout, one of my favorite beers in the world..

As always it was delicious. Like Uerige in Düsseldorf and Schlenkerla in Bamberg, it has amazing restorative powers over jet lag.

They have nine of their own beers on tap (plus two on cask) and as many guest beers (one on cask). Below is half of the draft handles. 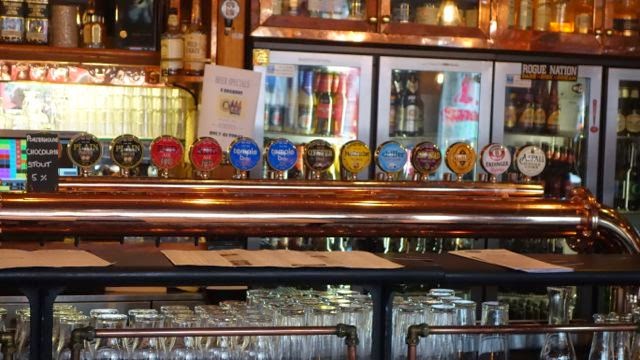 I could spend the whole afternoon drinking the Oyster Stout, but that wouldn't make for an interesting blog post, so in the interest of journalism for my next beer I had a 8 Degrees Knockmealdown Porter. 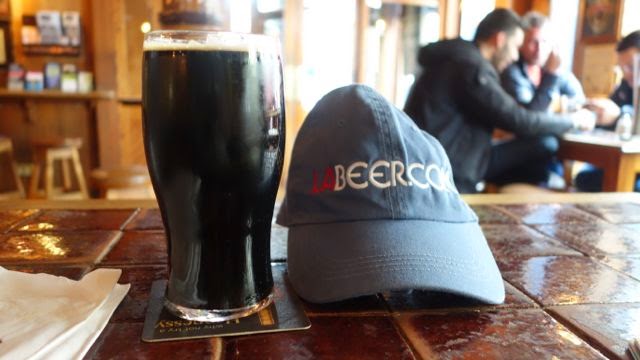 This is my favorite of their regular beers. It must be a cultural thing or something but most Irish breweries brew very nice dark beers. 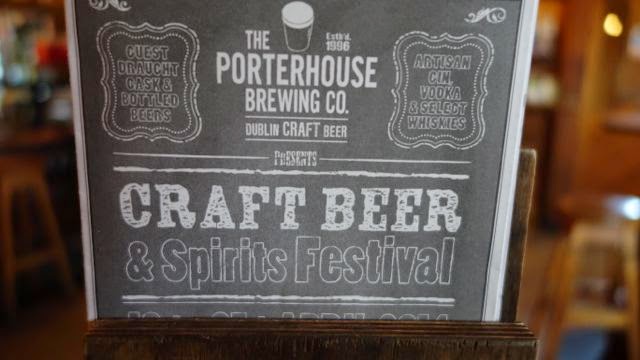 They were just starting to put the beers on and it was tempting to stay and work my way thru them, but I decided to move on. Across the river and up Capel street is the Black Sheep, a pub of the Galway Bay Brewery. 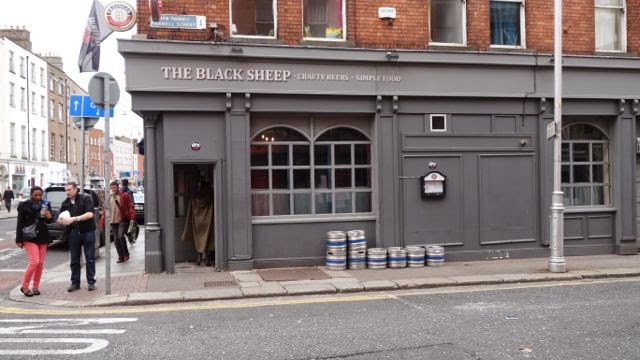 They have four regular beers, the occasional seasonal or two plus a wide range of guest beers. 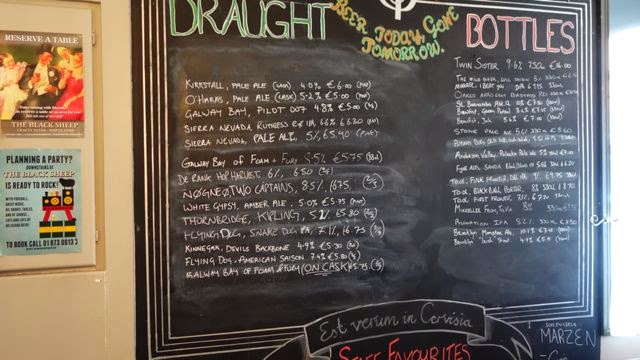 I went with what they called "Pilot 007" aka "Incognito" a Saison hopped with NZ hops. Quite a bit different from the previous porter and stout but a good and refreshing change. 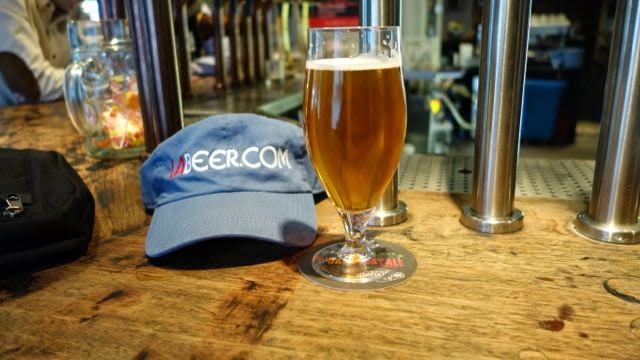 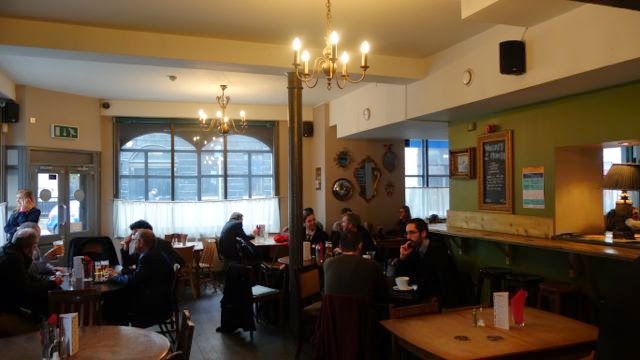 This is most of the taps but in the second room they have three beer engines and a couple of more casks. 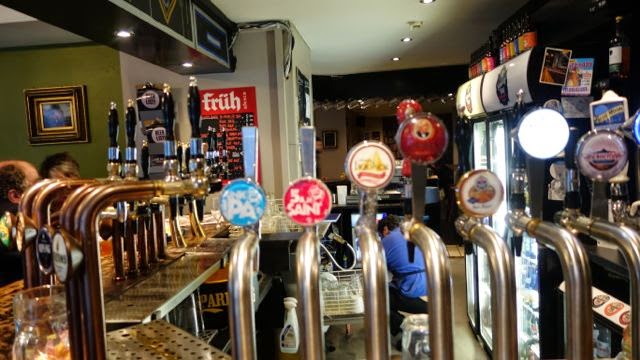 You can even buy shots of BrewDog Sink the Bismark or Tactical Nuclear Penguin. I think I'd rather try the Poitin  (basically Irish Moonshine). 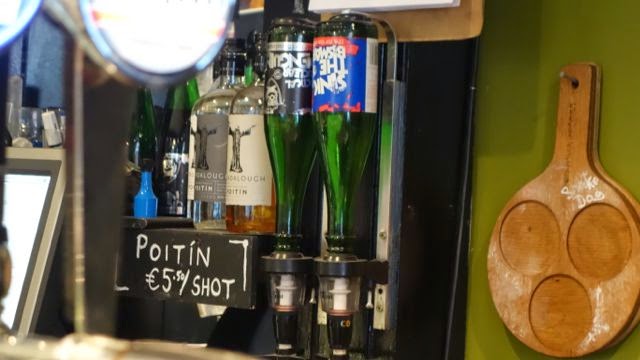 Most of the beers I wanted to try next were too strong for the first day (7%+) so I decided to move on again.  I had heard good reports of a new place just down the street, called The Beerhouse. 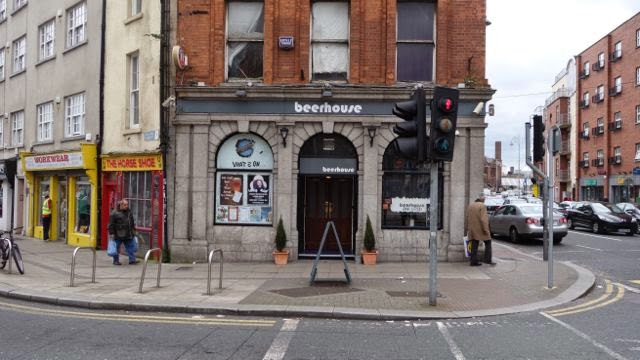 It turns out I had been here once before, back in 2011 when it was called O'Byrne's Beverage House.

The Beerhouse has a much better selection. I started off with a beer from a new (for me) brewery, Bo Bristle. I had their IPA 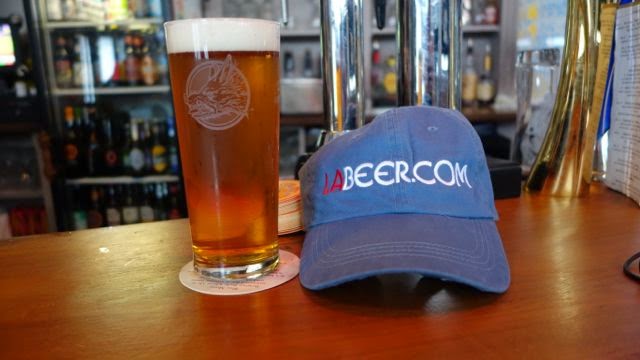 At 5% is a little less strong than American (especially West Coast) IPAs though it was pointed out to me that IPA can also stand for "Irish Pale Ale." It was nice and hoppy though and very tasty.

They also sell a "Beer Pouch" that will hold three (Imperial) pints. It looks to be Mylar and is resizable up to 60 times. The charge €4.95 for the pouch and then you pay for the beer. Much lighter (and less fragile) than a glass growler. 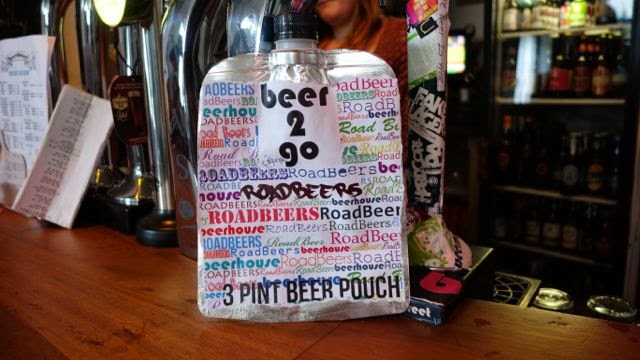 Next up was 8 Degrees new beer, Amber Ella. I had read lots of good reports of this and they were all  true, a very tasty beer. Hops but malt to back it up. At 6% it a bit stronger than a typical beer here. 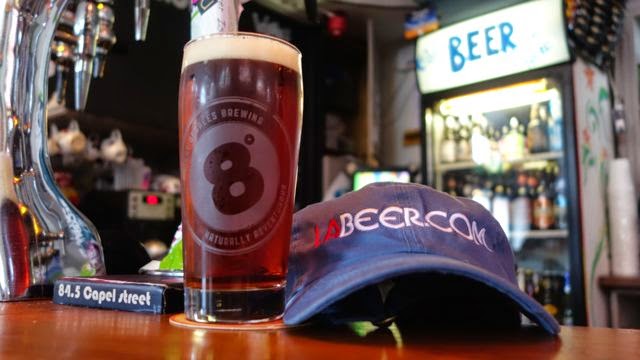 They have a pretty good selection of beers, most of which I'd try. I passed on the Molson's Canadian, probably to the dismay of my Canadian relatives. 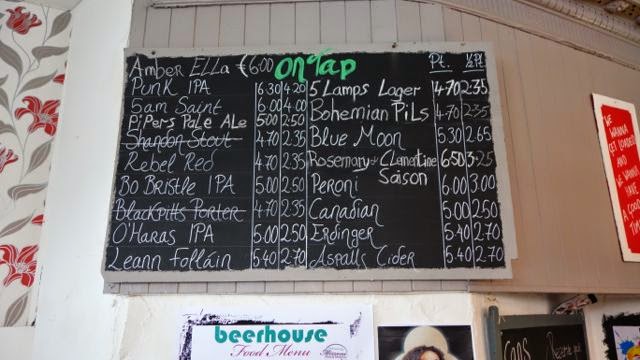 Out side the "Gents" was a warning sign.  Many people I know would compete to see how many boxes they could check off. 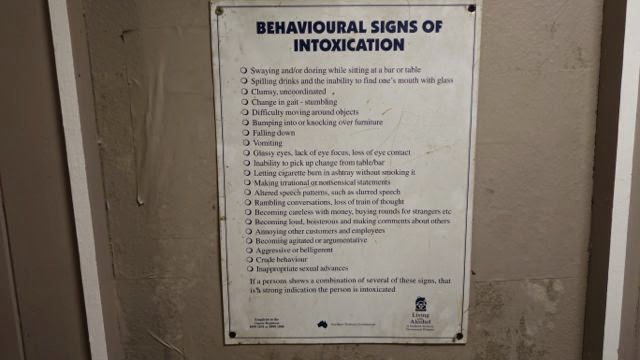 It was time for some food, so I walked over to the recently reopened W.J. Kavanagh's.

When I was here last year, this was my favorite new place and I ranked it was one of the best in Dublin. I was very sad to hear that it closed in December. It was not that is was not doing well, but the owners -- who also own L. Mulligan Grocer's -- felt they were spreading themselves to this with two places.

Luckily, I few weeks ago it reopened with new owners. I was curious to see how it had changed. 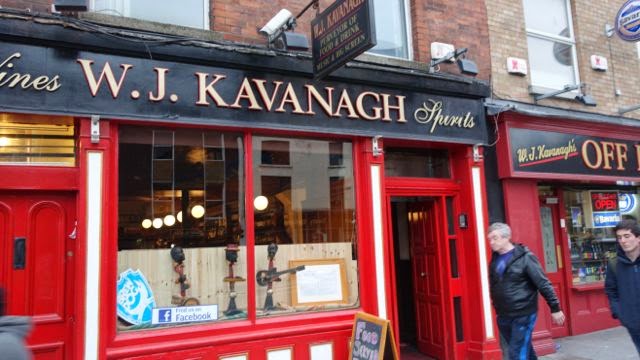 The beer list was not quite as extensive -- not the least because the four hand pumps were relocated to L. Mulligan Grocer's -- but there were a couple of beers I had not tried before. I started with the Kennegar Brewing Scraggy Bay IPA. I was told they had an American brewer and the beer certain had an American style aggressive hopping. A good choice. 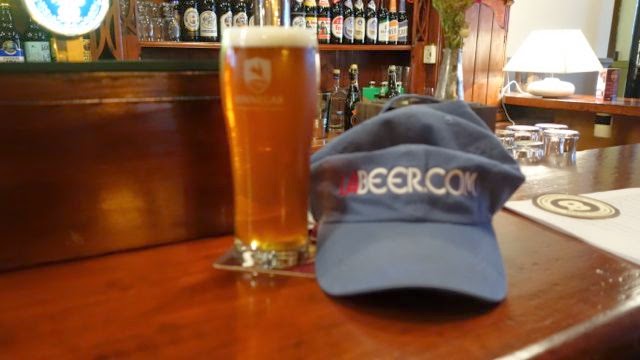 The food menu was not quite as experimental as the previous owners (no Wasabi Mushy Peas or Black Pudding WonTons). I had a couple of appetizers: a smoked salmon plate and an Irish cheese plate. Both were very tasty and I look forward to trying a main course.

The new WJK is not up to the very high standard of the previous version, but it is a nice pub and I can recommend it to anybody visiting Dublin. The new owners are making a good effort and I expect it will improve in time (It has only been open three weeks).

Well, the jet lag caught up to me so I decided to call it a night and went back to my hotel.
Posted by The Mad Brewer at 2:07 AM