On the way there,  I passed by J.W. Sweetman, a brewpub that was formerly Messers Maguire. 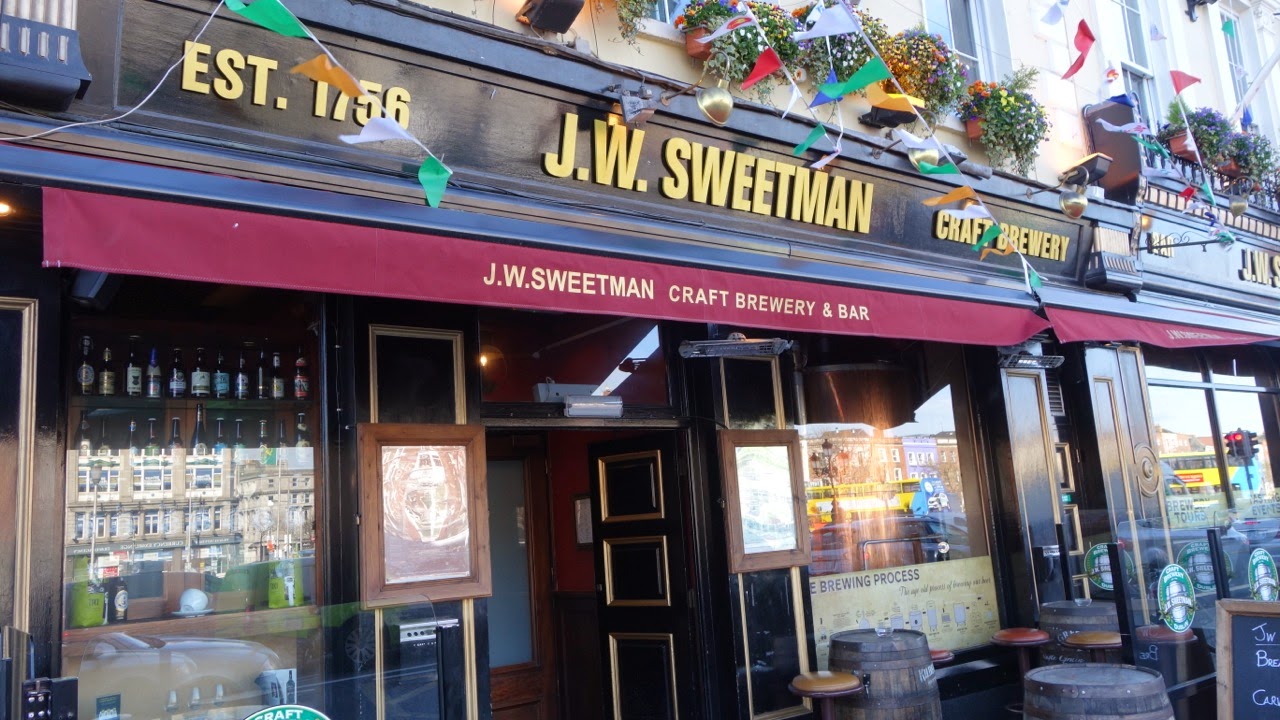 Towards the end of its life the beers were fairly bad, so I was hopeful that the new ownership would have improved things. Only way way to find out. 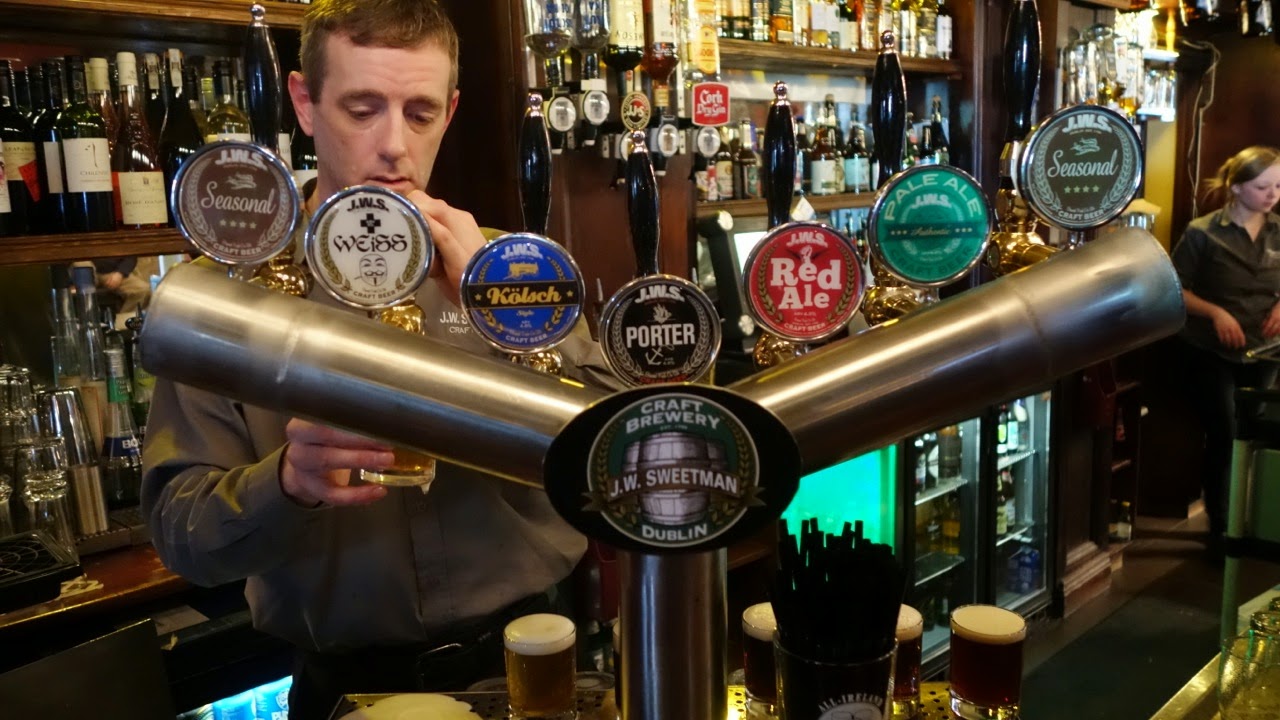 It turns out they have 7 beers on tap, 5 regular and 2 seasonals. I went for the full sampler... 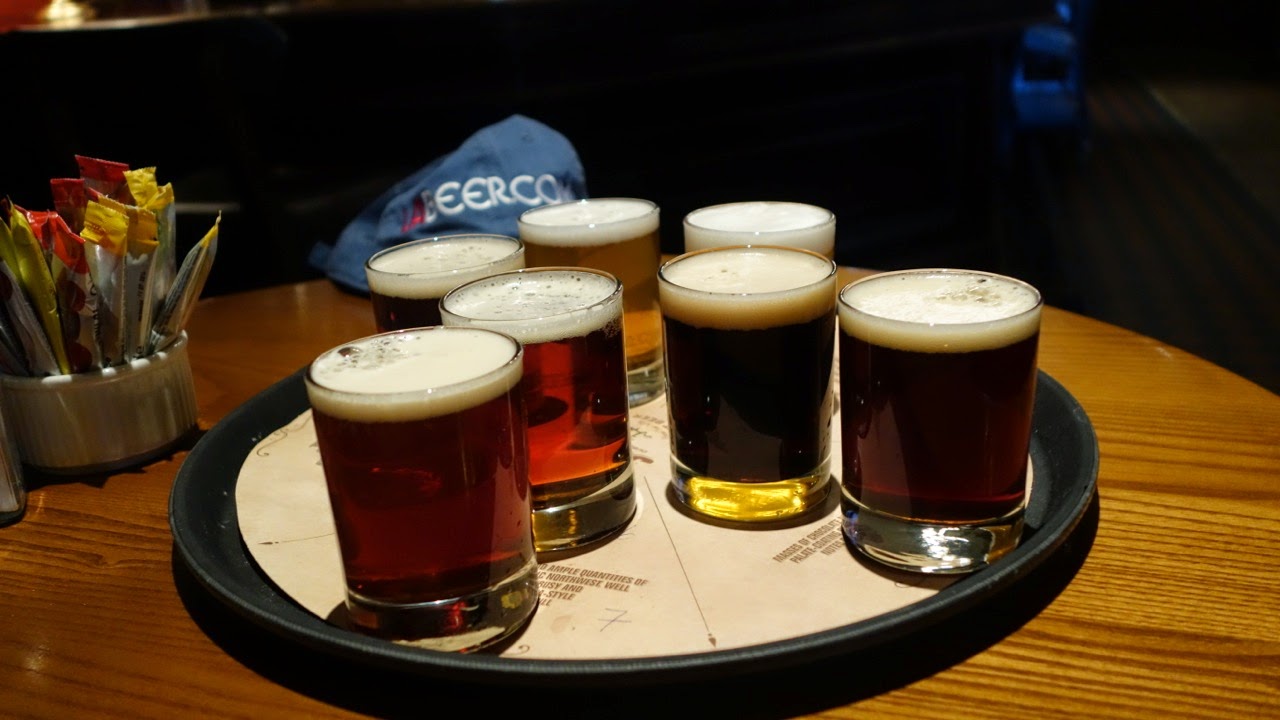 The standard beers are a Golden Ale (they call it a Kölsch but it isn't), Weissbier, Red Ale, Porter and Pale Ale. The seasonals were an Old Ale and an Amber Ale brewed with Austrialian Galaxy hops.

All were well made and tasty. The "Kölsch" was much much better than I expected -- usually these type of brewpub beers are fairly plans. My overall favorite was the Porter but the Amber came a close second.

They have beer quotes on the wall, this one being one of my favorites. 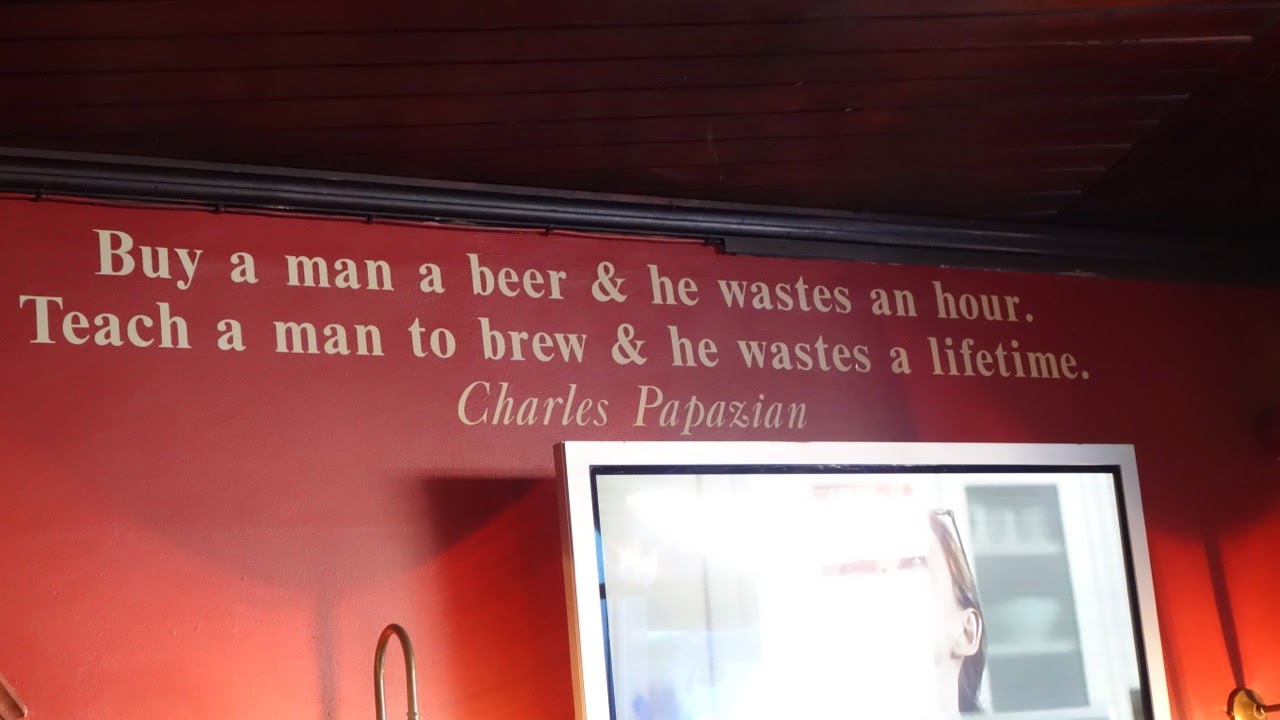 There were a bunch attributed to Benjamin Franklin that are not from him, but I wasn't going to argue.

After my 7 tasters it was off to the Porterhouse. Dave wasn't there yet, so I had a pint of cask TSB. This is a beer they brewed initially for their London pub. At about 4% it is a great starter beer -- if you just hadn't rushed down 7 brewpub tasters. 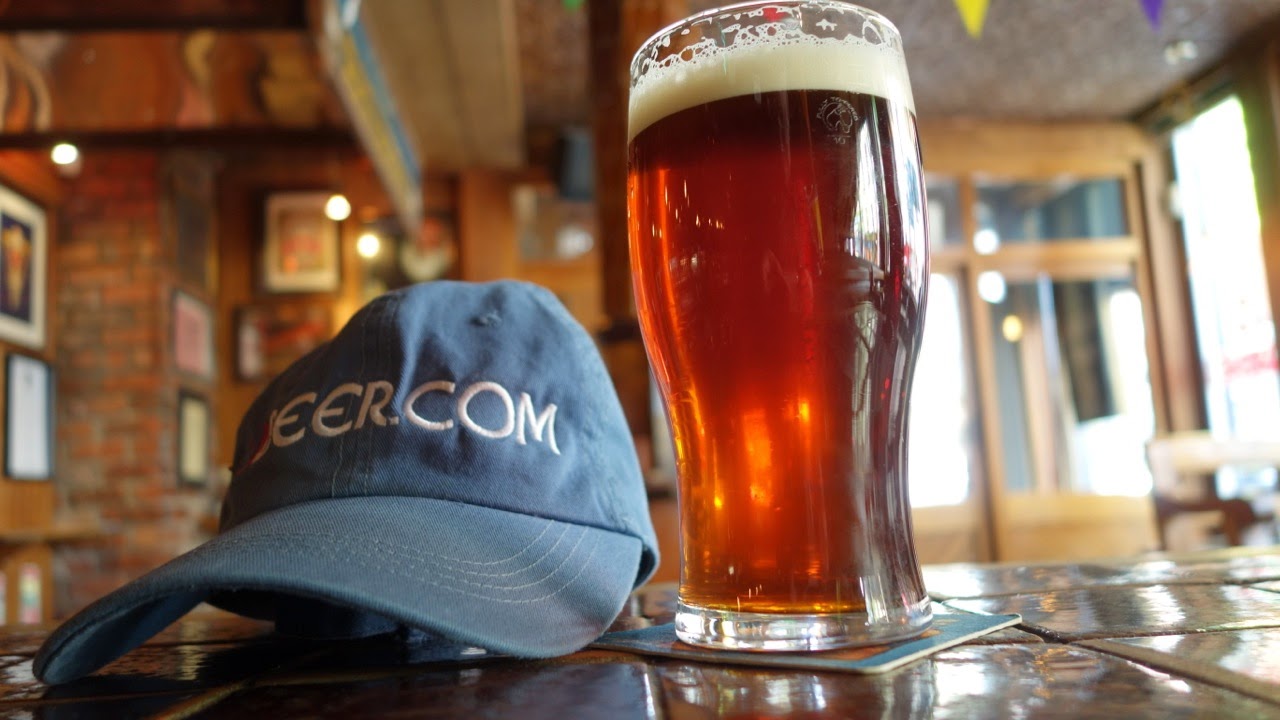 They had quite a few beers for the festival. Glad I was going to have help. 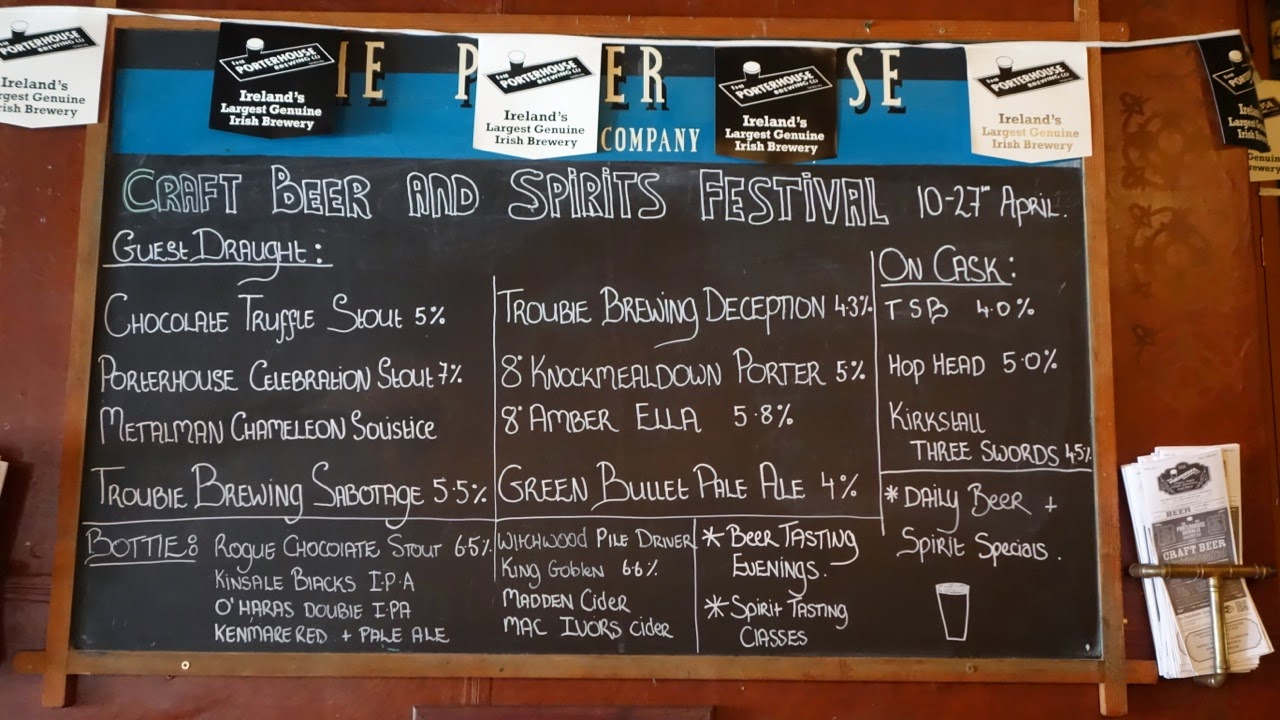 By the time I finished the TSB, Dave arrived and we started in. First up was Mountain Man Green Bullet Ale (using a NZ hop of that name) and Trouble Brewing Deception. 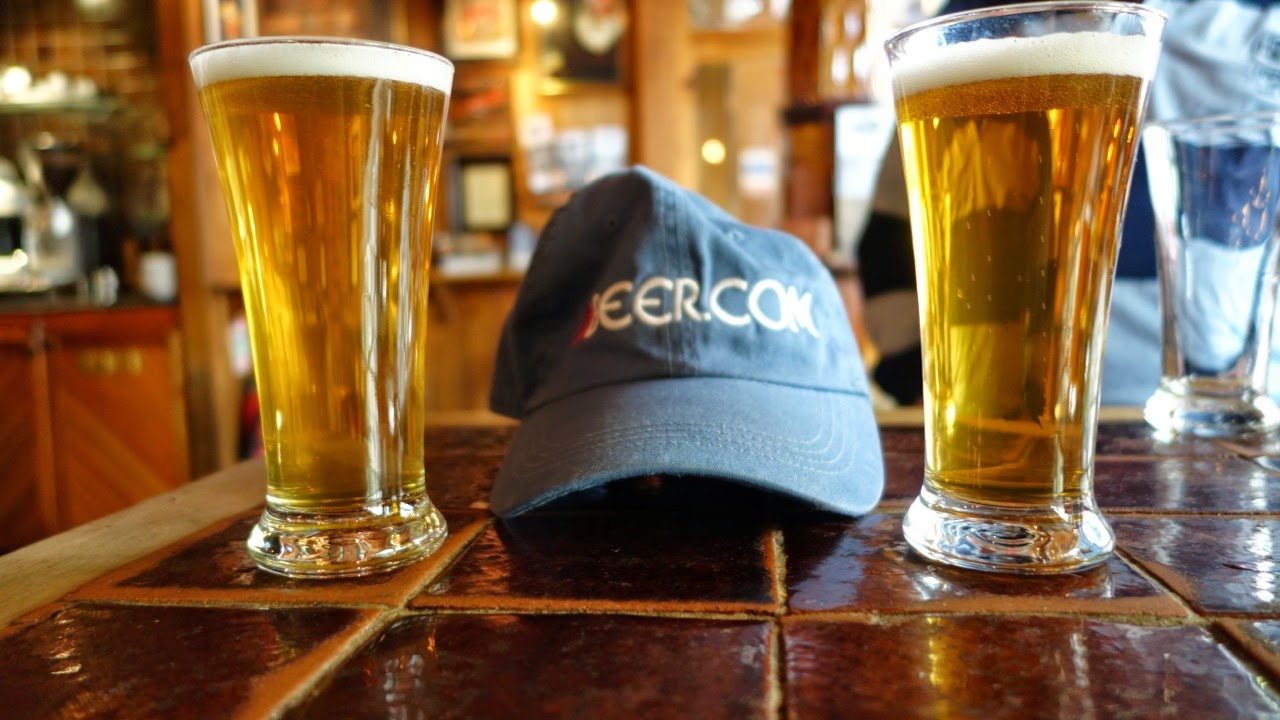 I would expect a beer named Green Bullet to be a bit more aggressively hopped, but it was tasty. The Deception was also very good.

Next up was Trouble Brewing Sabotage, Metalman Chameleon Solstice and 8 Degrees Amber Ella 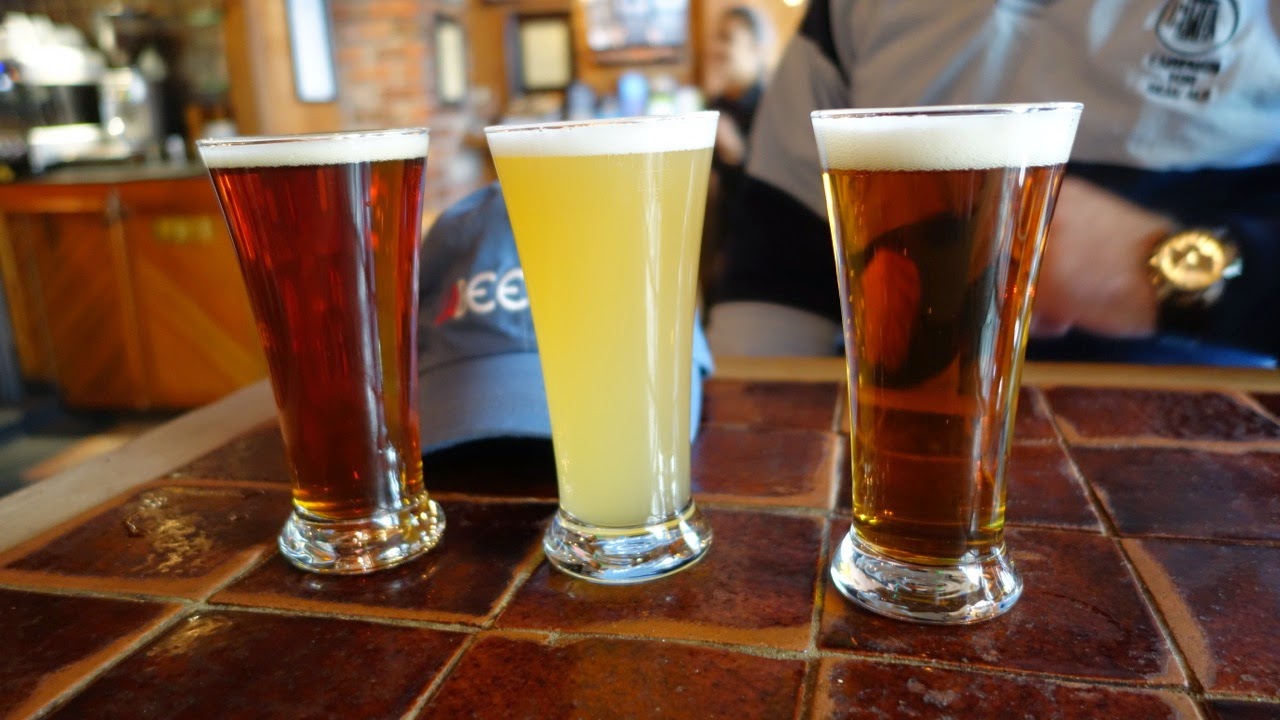 The Chameleon Solstice is a wheat beer brewed with ginger and was very interesting. Sabotage is Trouble Brewings IPA and was fairly hoppy (not by California standards, though). The Amber Ella is described as an American Amber Ale and that fits the bill pretty well. It was my favorite of the day, to this point.

The two Porterhouse entries were both stouts (go figure) a Chocolate Stout ant the Celebration Stout. 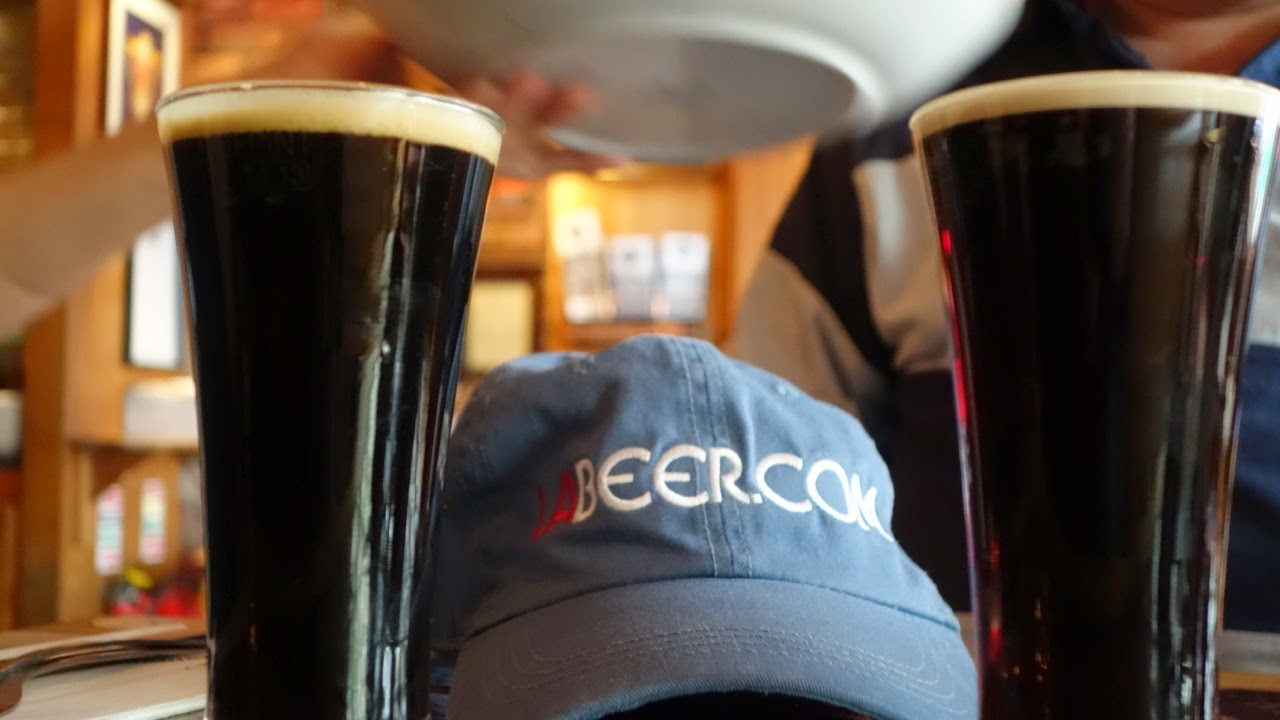 I am not usually a fan of chocolate in beers but this one worked. It had a huge bitter chocolate nose but the flavor was restrained (or hidden by the dark malts).  The Celebration Stout was first brewed for their 10th anniversary in 2006 and was originally 10%. This version was 7% but still good. It was the first time I'd had in on draft and one I would drink regularly if they had it regularly.

We decided to finish up with a bottle of Black's Black IPA. This is a new brewery for me and if this is any indication they will do well. 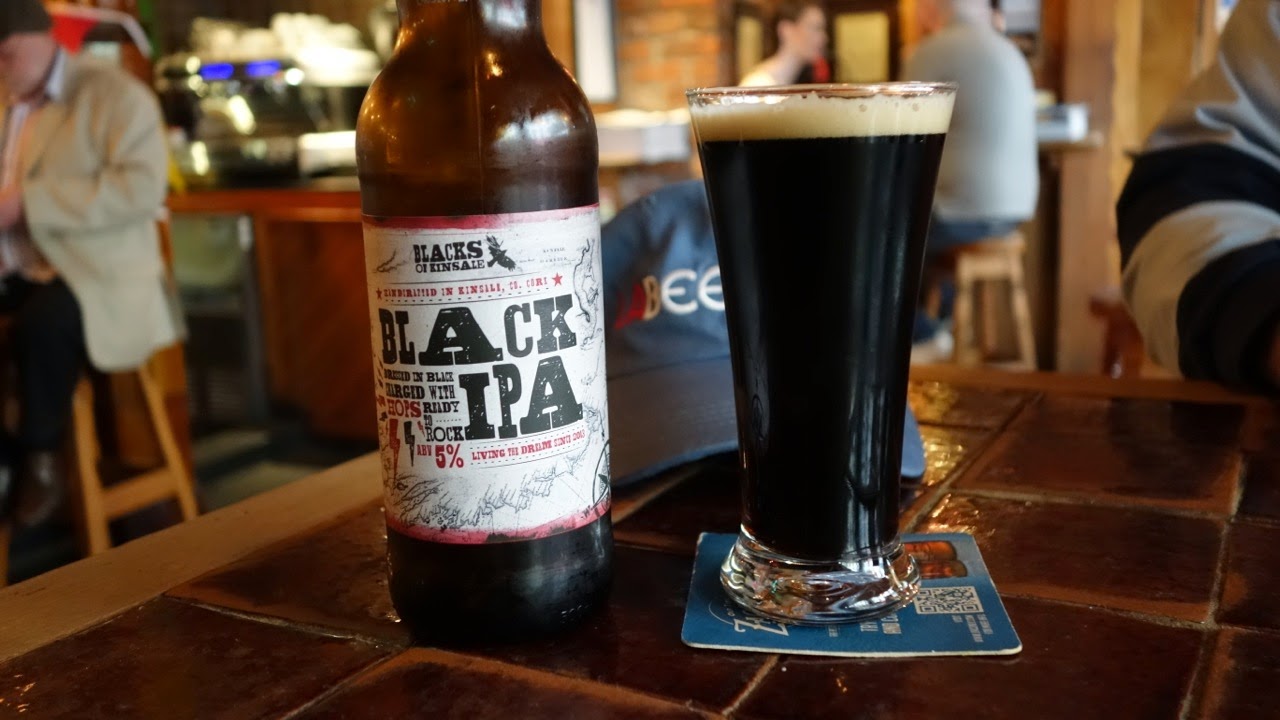 Dave wanted me to meet some of his friends who are going off to Bamberg next month, so we headed over to the Brew Dock, another Galway Bay Brewery pub. 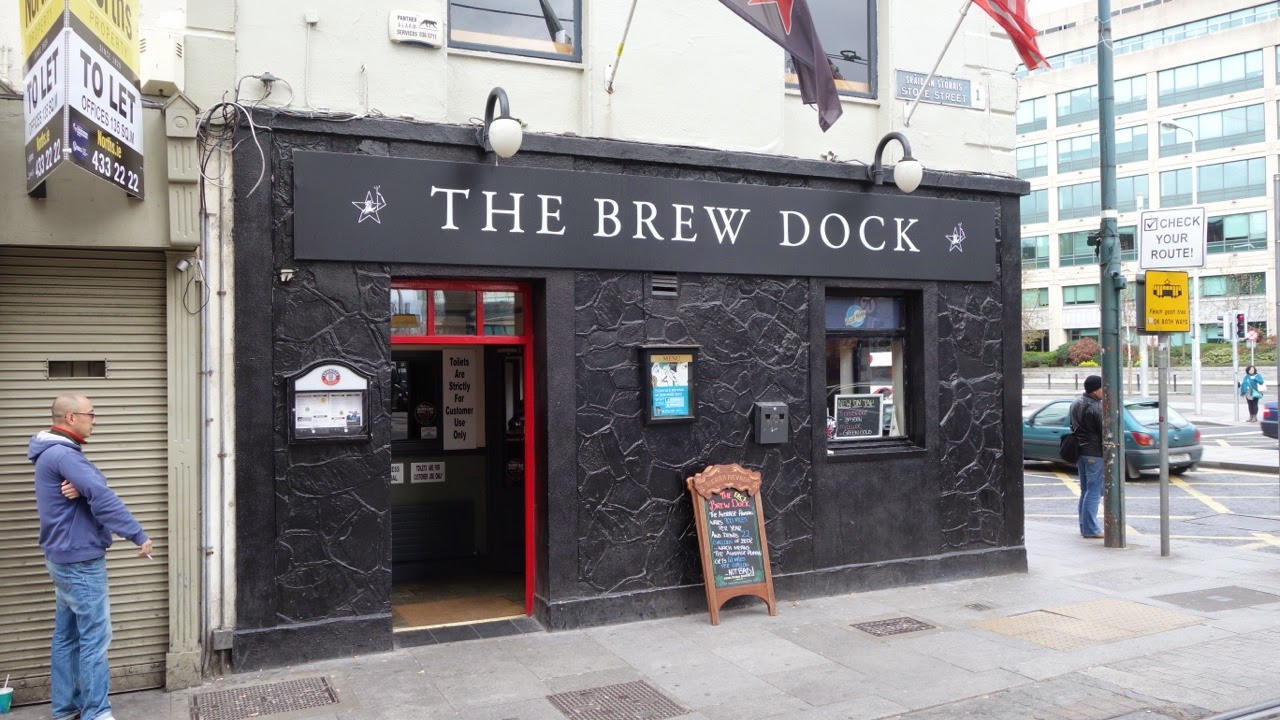 Since I belong to Beoir, the Irish beer consumer's group, I have some tokens good for 50 cents off of Galway Bay beers. So I started off with their Stormy Port Porter. I like porters and this one is tasty. 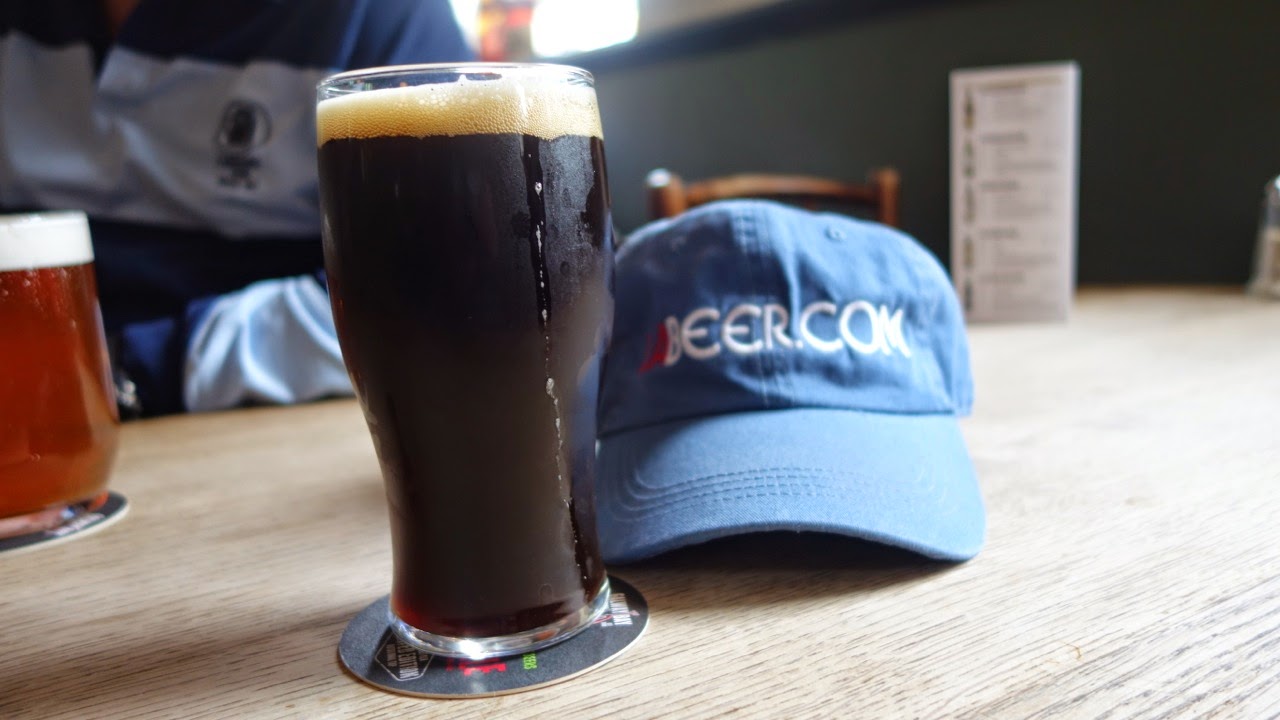 I noticed they had Schlenkerla Weizen on tap -- that is one that I hadn't seen on tap before -- certainly not in Bamberg (though my Swedish friends promptly told me they had it at Akkurat last month) . I was tempted to try it but I am here for Irish beer so I passed. They also had Sierra Nevada Bigfoot on draft. 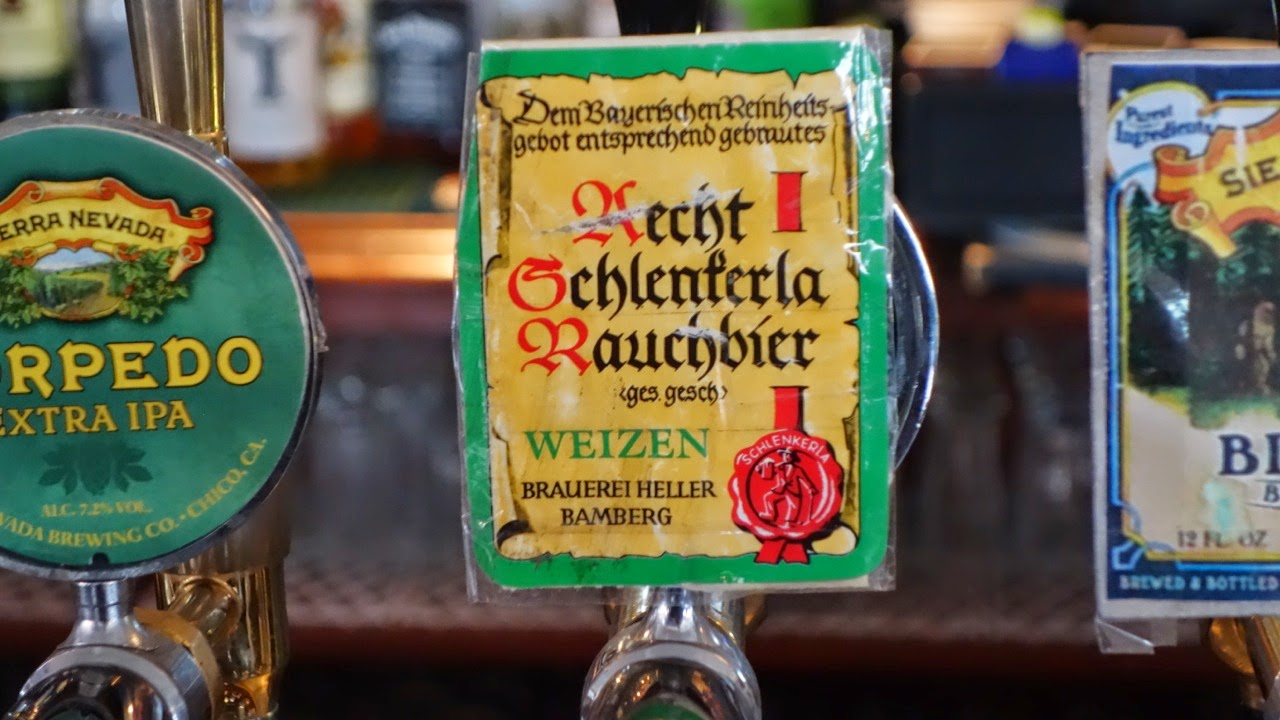 They had quite a good tap selection, and two hand pumps in addition. 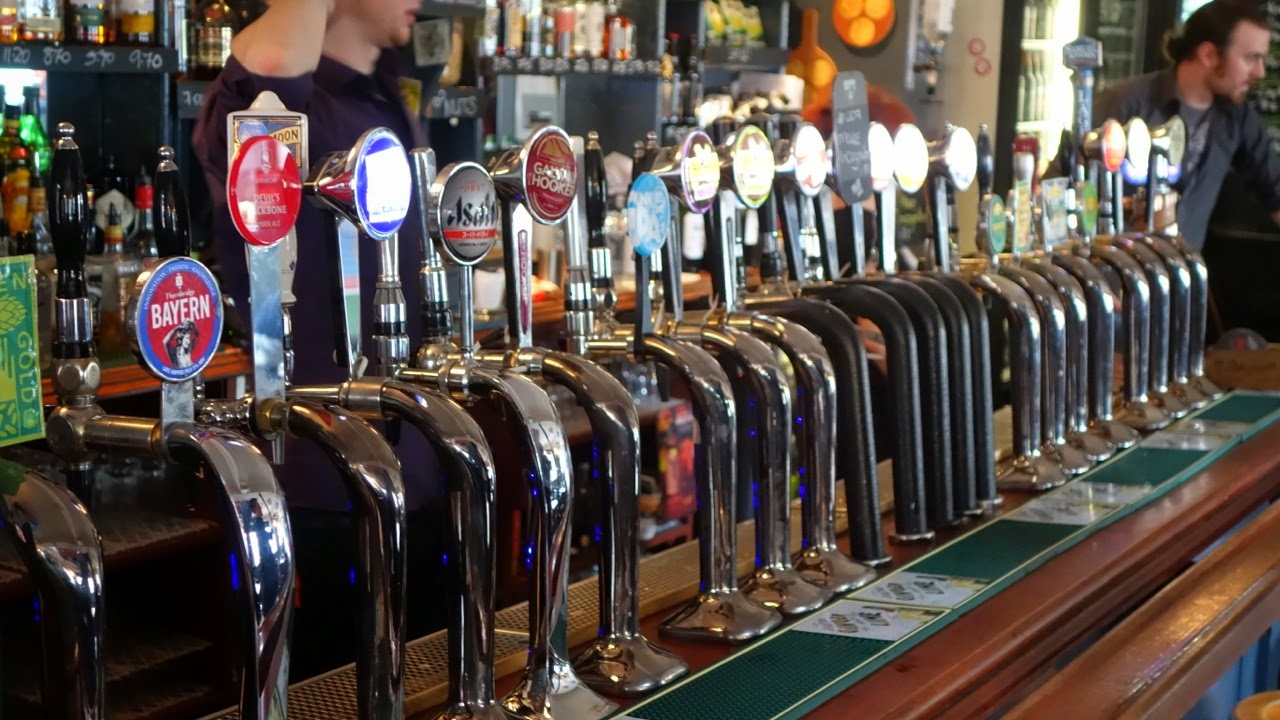 One of the cask beers was White Gypsy Brunette, a beer I hadn't had before so I went with that. 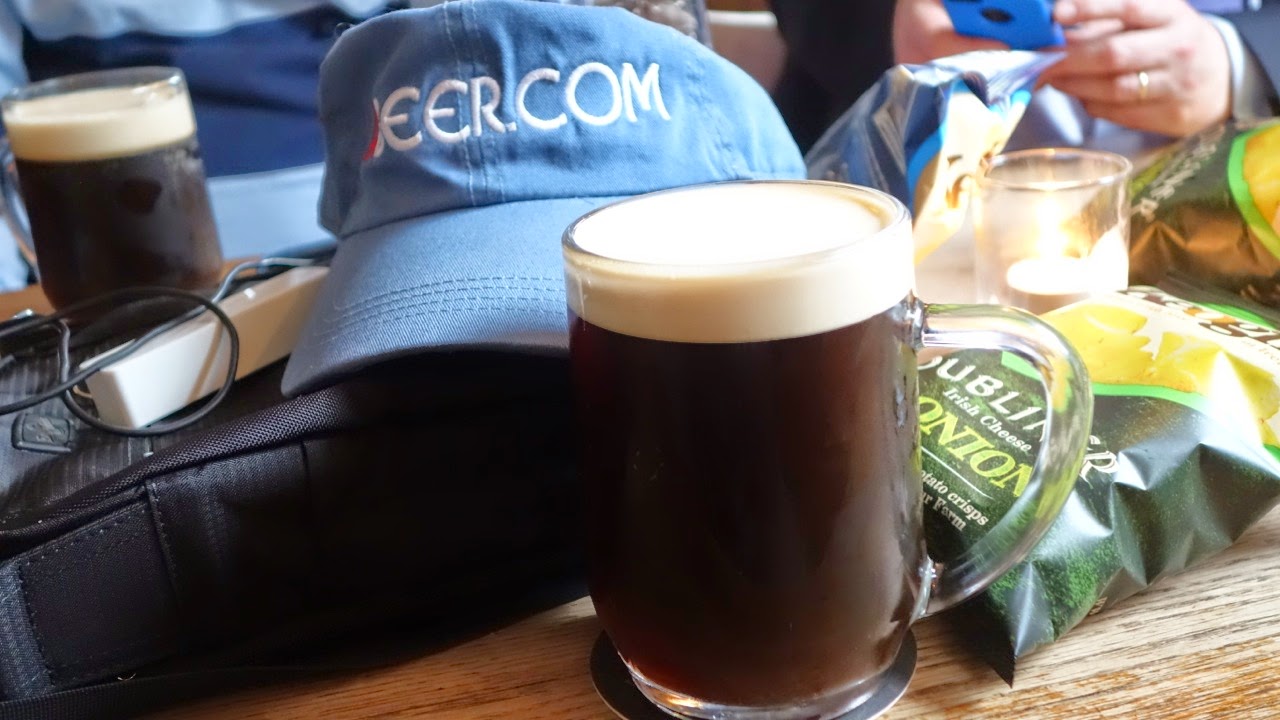 It was good but I not sure it is the best candidate for a had pump. I would like to try a draft version of it to compare.

At this point jet lag started to kick in so I called it an early night.
Posted by The Mad Brewer at 2:50 AM

There was a bit of controversy at the Porterhouse festival launch on Wednesday: the Metalman brewers claim that it cannot possibly be Solstice, and that what's being served is actually Equinox. The Porterhouse bar staff insist it definitely says "Solstice" on the keg, and Metalman say they never mislabel kegs. So, I dunno. I'm inclined to believe the brewers.

I don't know the beers so I couldn't tell. Which is the more recent beer? Maybe it was an older keg. Whatever, I'm sure it was an honest mixup somewhere.

Yeah, I can't imagine anyone's trying to pull a fast one. Both beers are regular seasonals, and very similar in recipe to each other. It's not an earth-shattering problem if people drinking Solstice think it's Equinox, or vice versa.

Oh, and while you're here, don't miss the two Dublin Brewer beers at The Larder on Parliament Street. New and exclusive!

The Larder is on my list. Tonight or tomorrow for sure. Thanks.

A pub in Stockholm tried to introduce a house Kölsch, brewed locally. After I told them about laws, they contacted their lawyer and promptly changed the name to Cologne Style Beer or something similar. EU laws to protect the Kölsch name also apply in Ireland.

Indeed they do. That's why the JWS one is called "Kölsch Style". You can see that if you zoom in to the picture above.