After an uneventful trip (except I had to ride backwards from Brussels to Köln) we arrived in Düsseldorf, checked into the hotel and went in search of beer...
The signs at Uerige are new, in the past was a big white poster board with the logo and in the bottom right corner the phrase "Morje Sticke" (Morje is tomorrow in the local dialect). "Bald" is "soon" which is somewhat indeterminate. 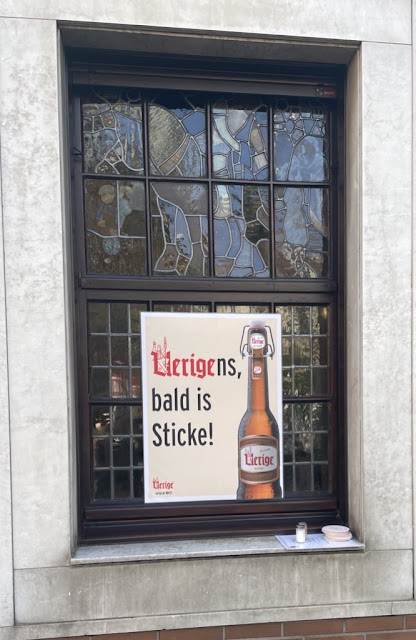 It was warm in the sun, so we grabbed and outside table and soon had our first Uerige. 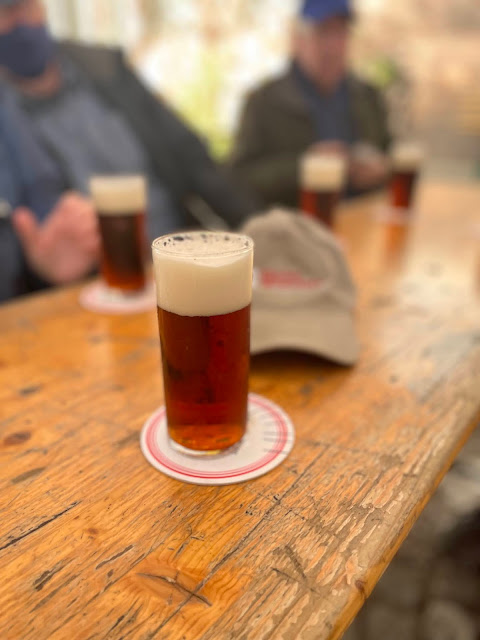 Tasted just how I remembered. I've been to Düsseldorf at least once every year since 1996 -- except for 2020. Antwerp now has my longest unbroken streak, every year since 1998. Unbroken because i was there in January of 2020 just at the end of the Before Times.
I meant to buy a sandwich for the train ride, but forgot to, so some food was in order. I saw a Köbes go by with a frikadella and that seemed about right. Love that ABB mustard. 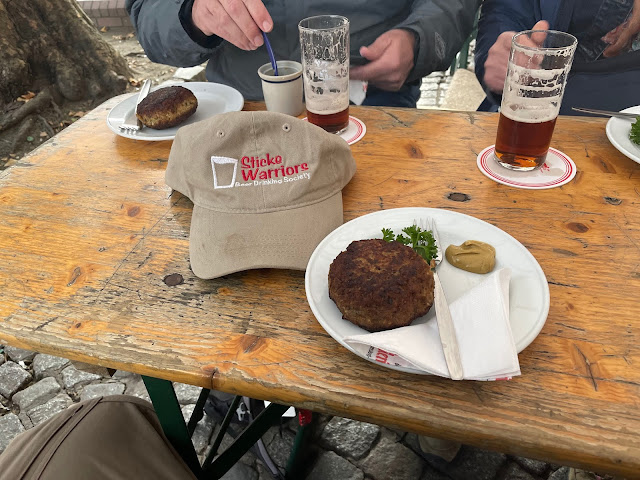 As the sun went down it started to get chilly so we moved inside. It was a bit jarring to see the plastic barriers up. You can't see it from this side, but the little round circles are Uerige logos. 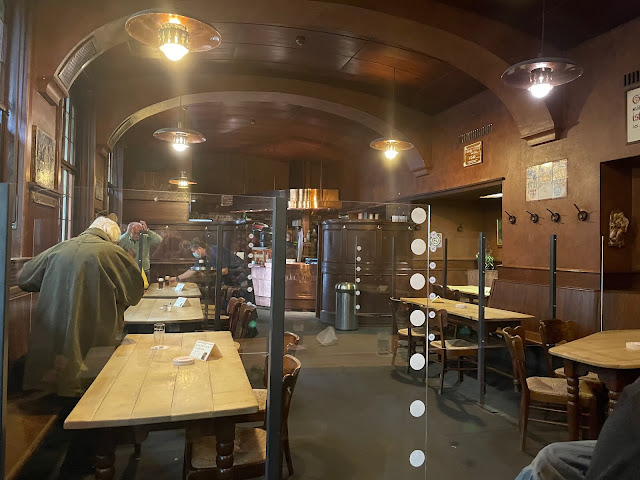 That being said, the beer tasted just as good inside as it did outside. 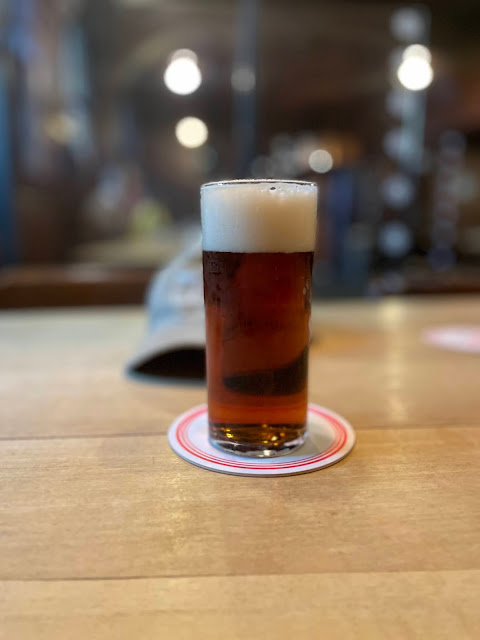 Another tradition of ours is to stand in the Marktplatz and wave at the webcam the city runs. It is a way for those friends who couldn't make the trip to make a virtual connection. I guess we could set up a video chat but sometimes the old ways are best...

I zoomed the screen before I took a screen shot and you can recognize some people (having white hair helps).

There was a stiff breeze coming off the Rhine so we soon moved on to Füchschen on Ratinger Str. 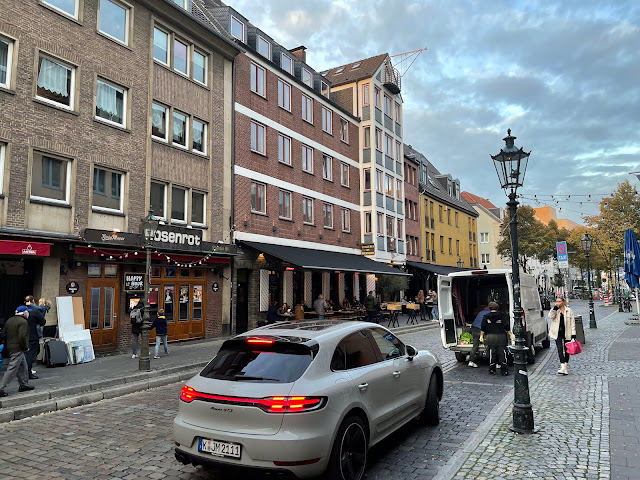 The beer here has been a bit variable in the past years as they were dealing with changes in the brewhouse. But today it was spot on. 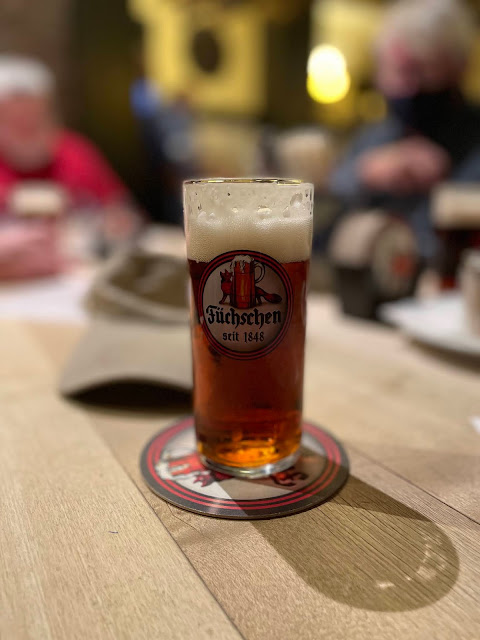 A different approach here: Ou vaccination status was checked at the door and there are no restrictions once inside.  I didn't read the sign as we came in, but it may be that only people who are vaccinated or recovered from COVID are allowed in (called "2G" in German).The place was packed. 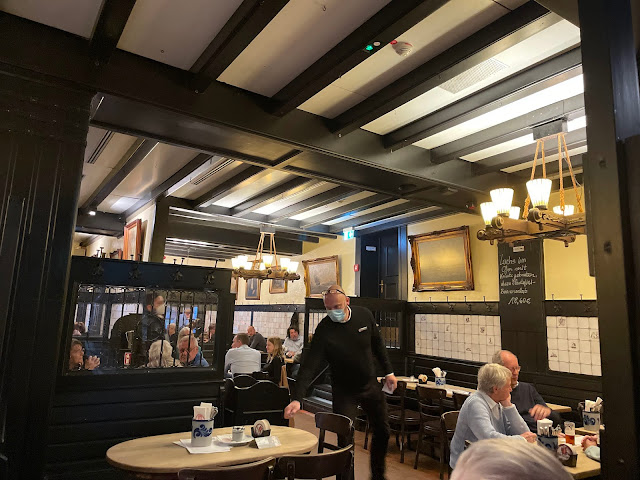 We pretty much all ordered the Sauerbraten. It was tasty but I think it has been "dumbed down" compared to in the past. The sauce was on the bland side, closer to a brown gravy than the spicy, juniper berry flavored one I remember. But the cabbage was spot on. Traditionally this was made with horse meat (it would be marinated for a week or more) but nowadays it is all beef. You can find the occasional restaurant that serves horse meat, but they are few and far between. 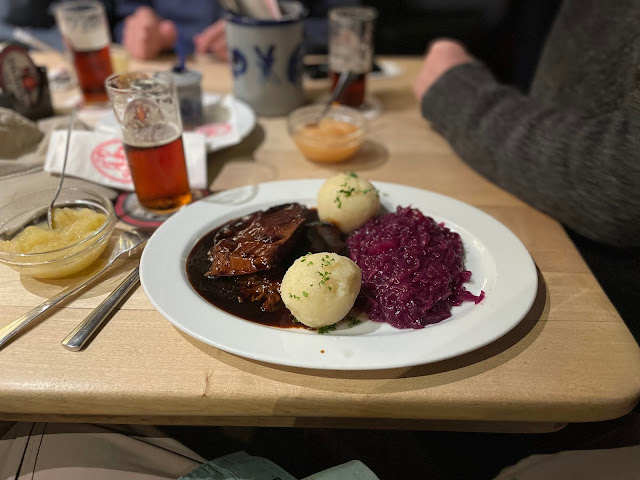 On the bottle of the menu they mentioned that had Alt Bier Ice Cream (2.2% abv) so I thought I'd try it. 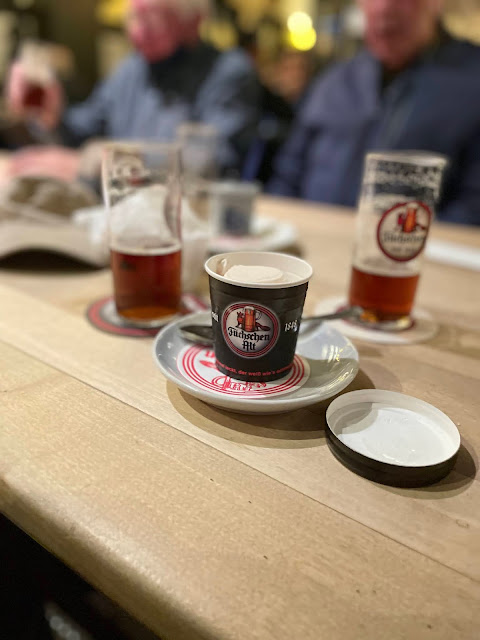 When it came it had a strange but not unpleasant flavor that was nothing like altbier. When I finished the cup I turned it over and on the bottom they had the ingredient list. Turns out this was the Rhubarb ice cream, not the Alt bier.. Pour packaging design because the only indiction was in tiny print on the bottom of the cup. Oh well, maybe next time.
Some the others went off to check out Schlüssel and Schumacher. I called it a night.

Email ThisBlogThis!Share to TwitterShare to FacebookShare to Pinterest
Labels: 2021, Düsseldorf