We statred at our usual place at our usual time. Nothing like consistence. Today, they had the Het Anker Cuvée van de Keizer Blond on tap. A very enjoyable beer although it doesn't as much of the house anise flavor some of their other beers do. I don't think I've had this before and I will look forward to trying it again. 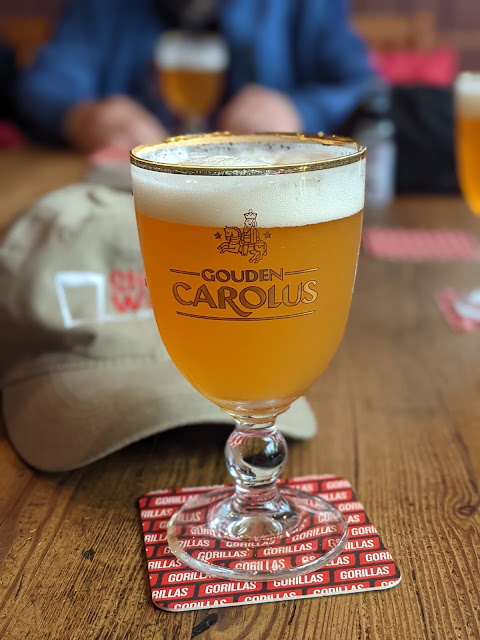 Dirk and some of his friends have a long running period column in a local newspaper where they do a blind tasting of a selection of beers and report the result. One resent one was of Whisky Infused beers (that is, beers with Whisky added). There actually was a tie between Het Anker Cuvée van de Keizer Whisky Infused and Wilderen Cuvée Clarisse Wild Weasel Whisky Infused but the ground rules with the newspaper said there had to be a winner and the Clarisse won in a taste off. 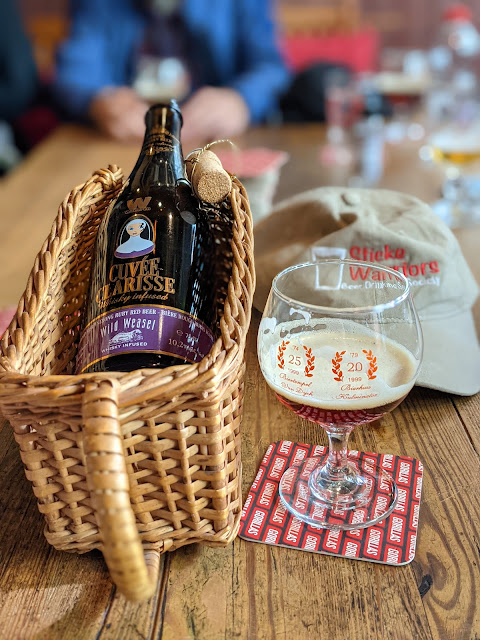 This was actually.a gift from Dirk so he sat down and drank some with us. I usually don't include photos of people here, but since we had a group photo, why not. 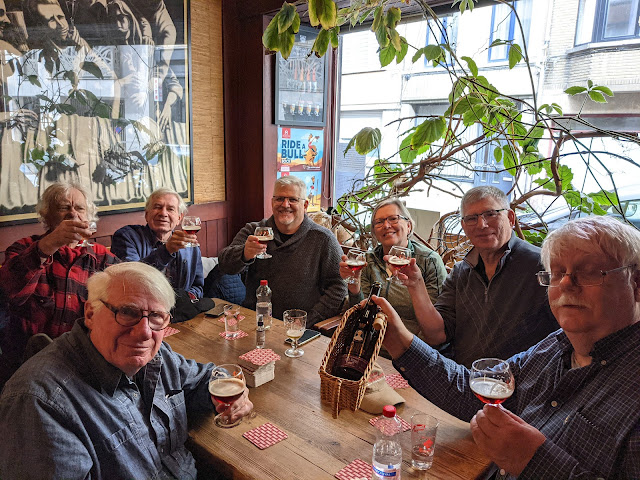 The Cuvée Clarisse was interesting -- there was a strong alcohol note, which you'd expect, but not a lot of Whisky flavor. I find the Cuvée v/d Keizer version to have too much Whisky flavor so this was a good think. I don't think it will find its way into my regular Belgian rotation but it was an enjoyable beer.

I realized I hadn't and the Rodenbach Vintage yet, so I corrected that. 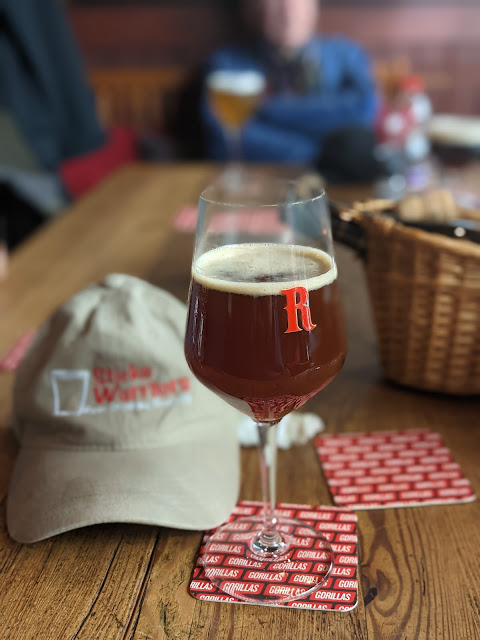 Nothing really much to say, it was classic Rodenbach and very enjoyable (if you like Rodenbach, that is)
A visit to the Kulminator isn't really complete without some sort of multi year tasting, so we had Leen chose four years of Stille Nacht. She came back with 2018, 2012, 2006 and 1999 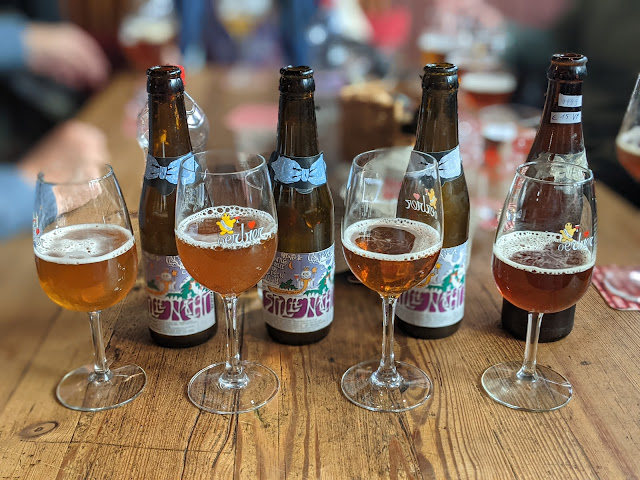 It was an enjoyable afternoon and we didn't really want to leave so we had another round. I had the Malheur 60 again -- nicely bitter to balance the sweetness of the Stille Nacht. 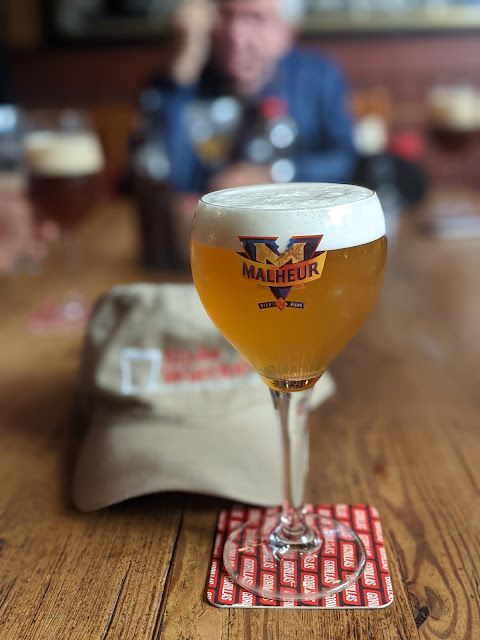 We said our good byes and heading down to Mechelseplein and caught the number 4 tram and after a short walk found ourselves at Special Belge Taproom. 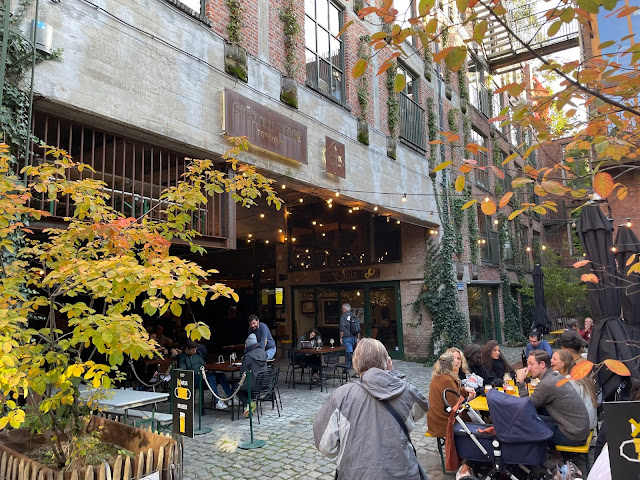 When I was last here -- nearly two years ago -- the brewery was sitting on a shipping pallet in the middle of the main room. I am happy to report it been installed on the upper floor and they are brewing some of their own beers. They've also increased the taps from 12 to 18. Improvements all around.
They now have a video board showing the taps. 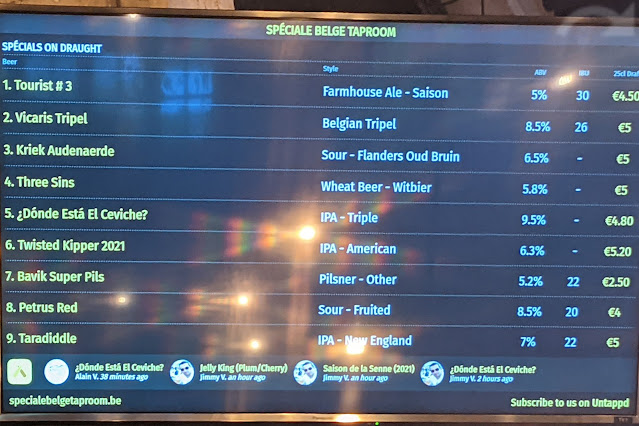 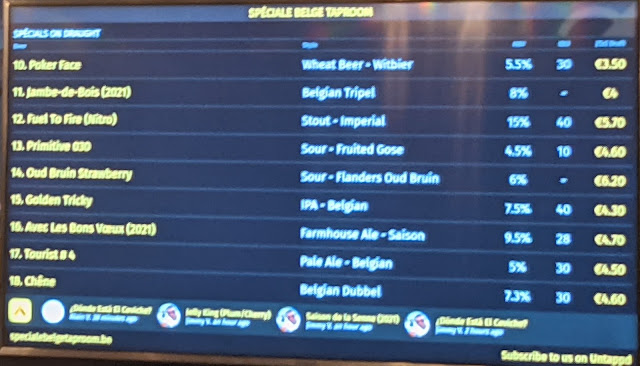 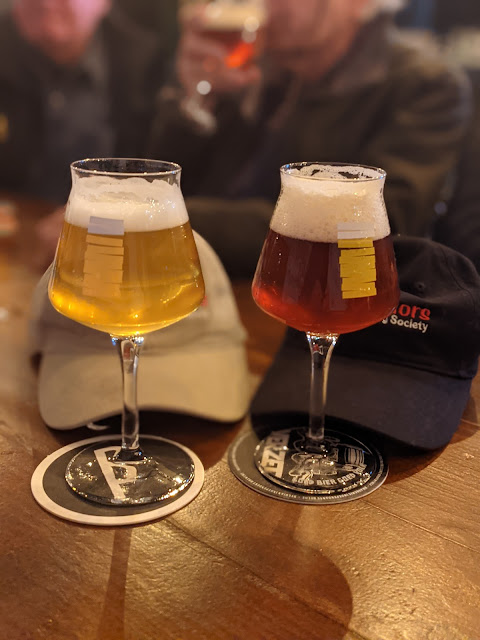 Everybody seemed to like the saison better. Even one of owners said they sort of missed the mark with the amber. It was a well made beer (no technical flaws) but was just not as interesting.
The electronic board doesn't list the brewery but their online menu does and I learned the Twisted Kipper was from De Kromme Haring of Utrecht -- one of my favorite Dutch breweries -- so I ordered one. 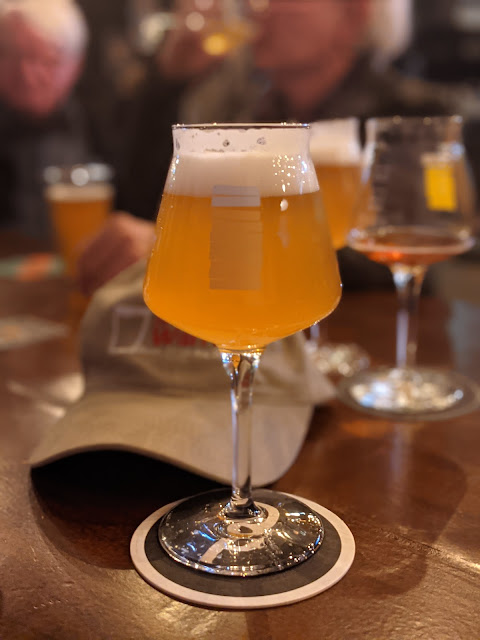 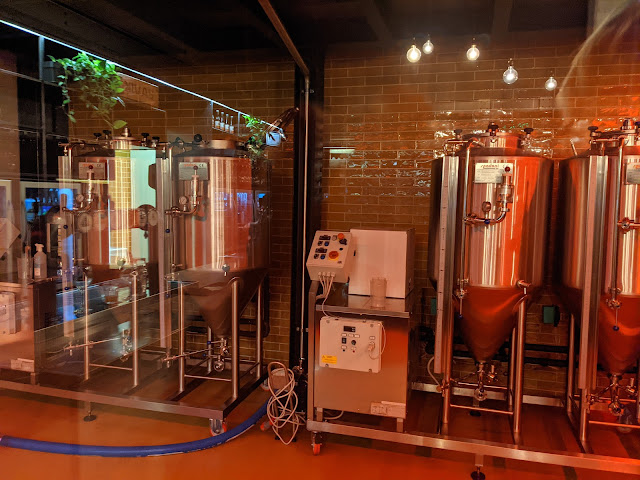 Back at Centraal Station we headed for a Vietnamese restaurant I'd enjoyed before, but I remembered the location wrong and thought it had been replaced with a generic Chinese restaurant. I was wrong -- the Vietnamese one was farther down the street. We ended up back at Mixor Kebab for another delicious kabab.
Posted by The Mad Brewer at 10:02 PM