Today is a travel day, so I will leave you with just the pictures and update the text as I have time...
The Kulmiator is closed on Sunday so we had to start somewhere else. Or plan was to walk around the Old Town and Paters Vaetje opened the earliest so that was the first stop. 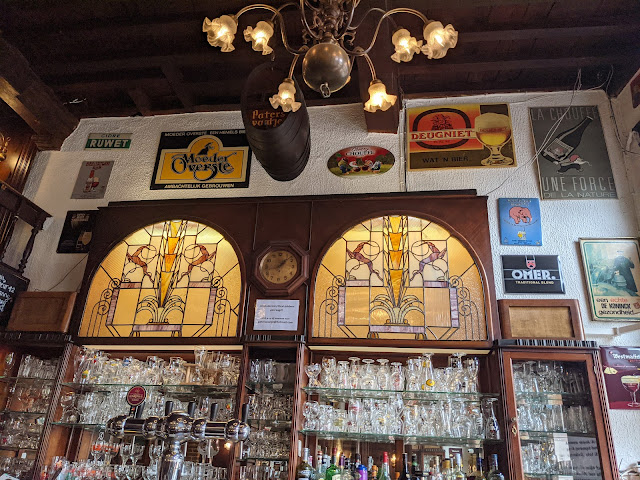 A Bolleke is always in order so I started with that. 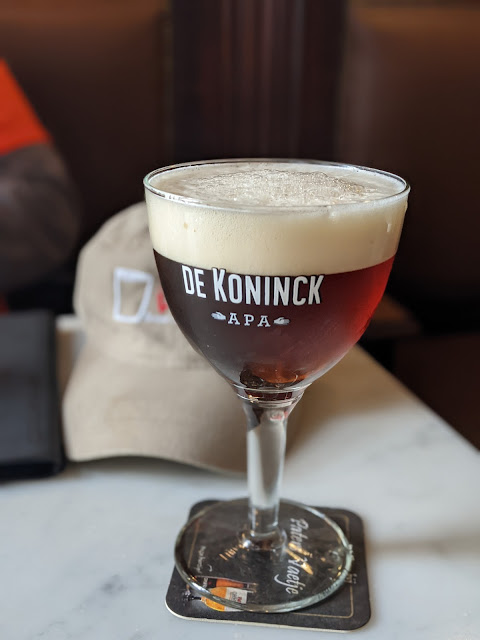 They had the DeKoninck Triple d’Anvers of the draft list but the keg had just blown so Plan B was Het Anker Gouden Carolus Classic. No problem! 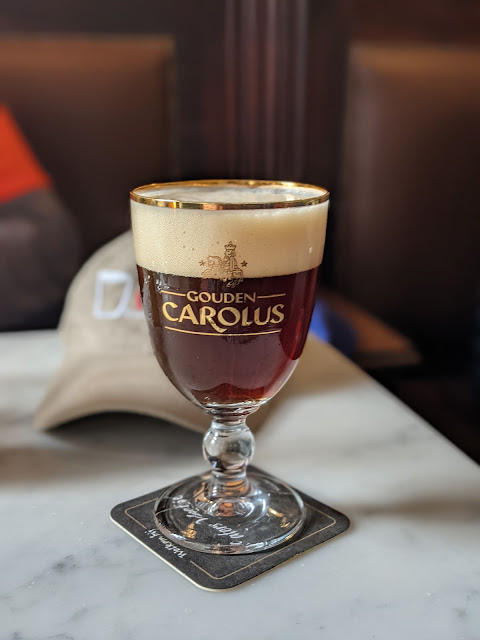 N
I wasn’t hungry enough for a meal, but a bowl of Chicken Soup seemed about right. It was clearly a mix with added shredded chicken but it hit the spot. 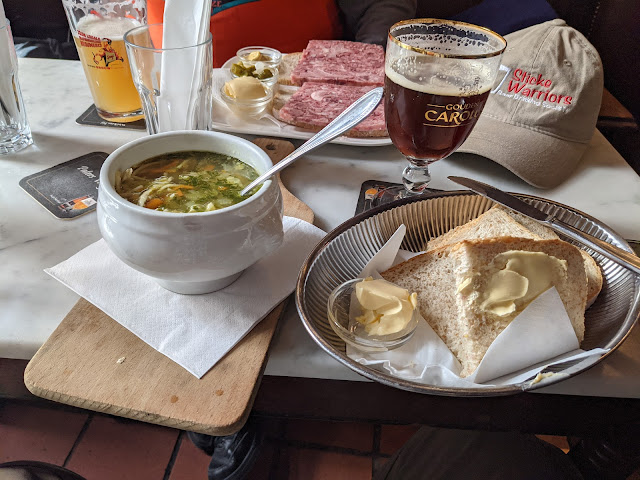 Cafe Parade would win the award for most improved pub in Antwerp, I first stopped in maybe 5 or 6 years ago. The tap list was uninspiring (what you'd find at any Belgian pub) but there was a decent selection on the bottle list. Since then they've added a new bank of taps with lots of goodies. Two years ago the bottle list was over 400 beer long, today it is over 700. And I have word from some local friends that it is a true list -- they haven't found any padding. 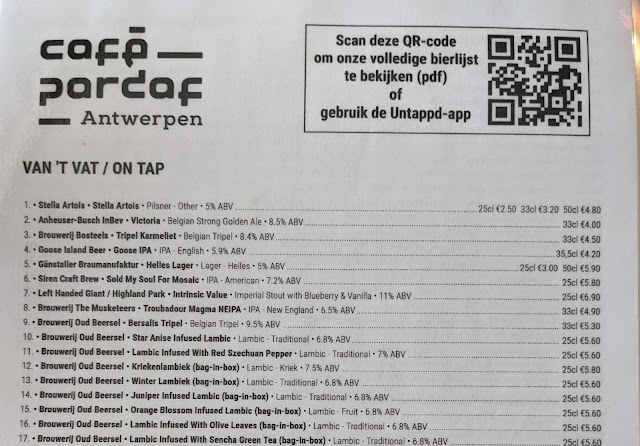 I usually try to drink only Belgian (or at least BeNeLux) beers when in Belgium, but Andy Ganställer is a friend so I ordered his Helles (#$ above). It was great, as I expected. 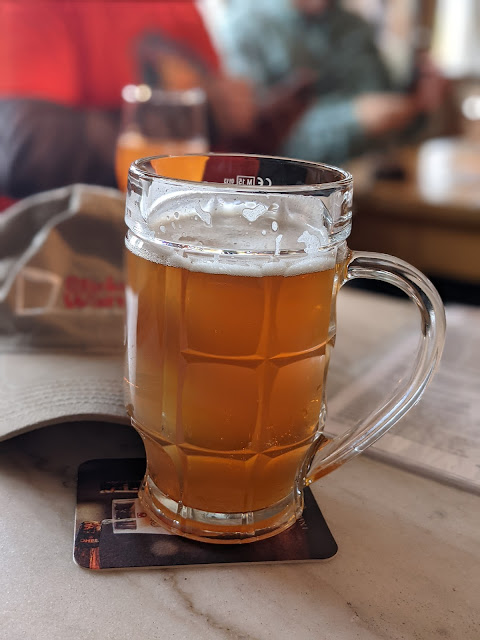 I realized that I had not yet had an Arabier from De Dolle and that was soon corrected. Outstanding as it always is. 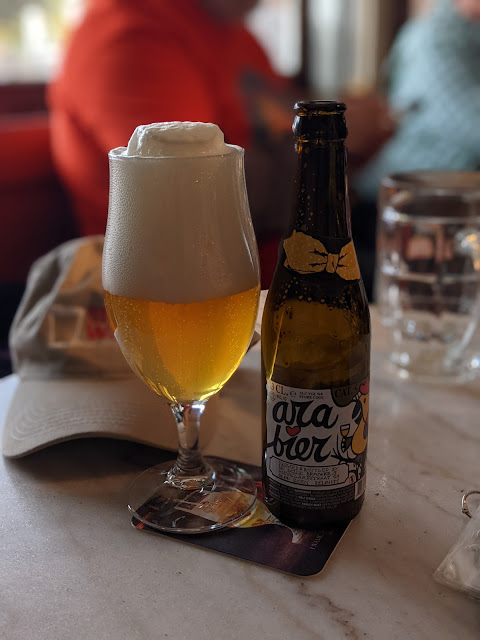 We could have spent the rest of the day there, but I wanted to check out the next place, Cafe Ernst. 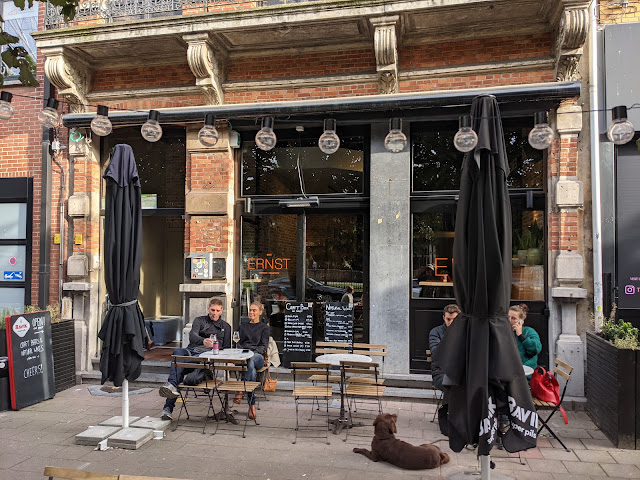 If you read posts from the blog from a couple of yours ago you may notice that is not the same facade. Cafe Ernst opened in 2019 and earlier this year literally moved next door. The are in the same space as the departed (and not missed) "Best Beers Cafe." Still ten beers on tap. 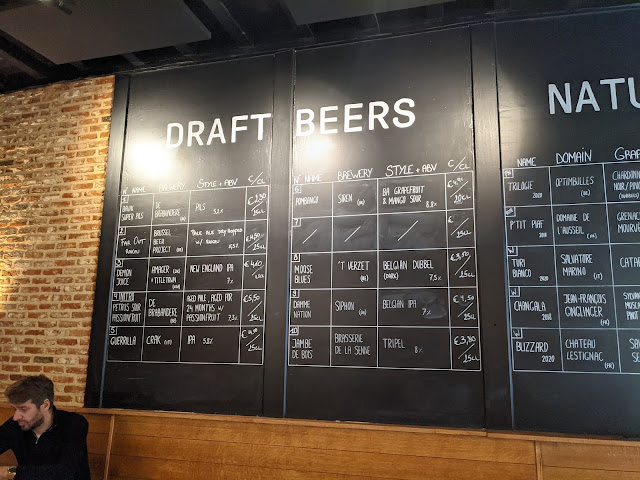 I've liked the beers I've had from Siphon so I ordered the Damme Nation. It was delicious. 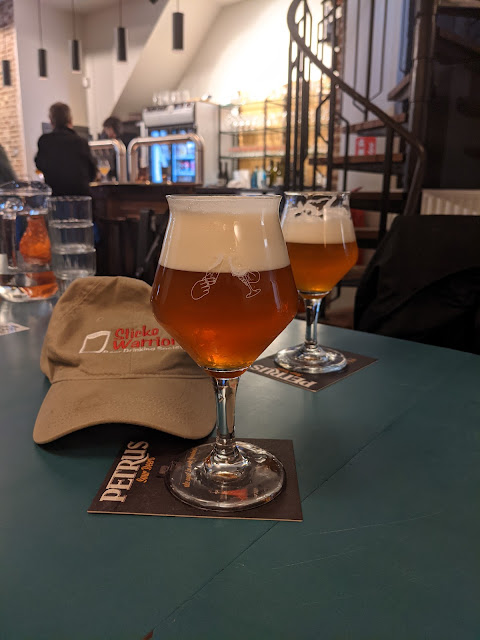 Other than the beers, the reason we here headed hear is they have a very nice Spaghetti Bolognese  They have their own recipe and it is very tasty... 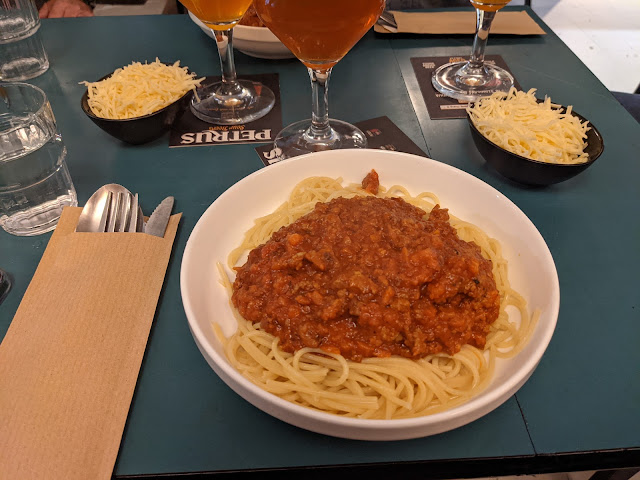 For my next beer I ordered the Siphon Cassandra Oyster Stout. Unlike the Porterhouse in Dublin -- which puts shucked oysters in the conditioning tank -- Siphon uses oyster shells. That gives the beer a unique "mimerally" profile. It is a very nice beer. 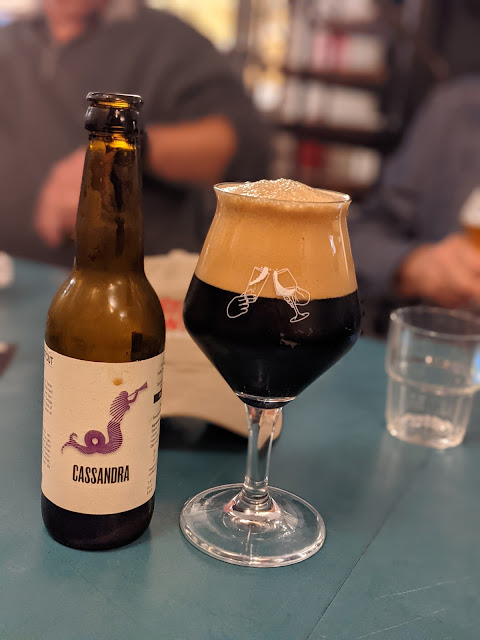 Next stop was De Ware Jacob, around the corner and up a block or so.  Only to find catastrophe when we arrived. They had run out of Avec les Bons Voeux! Guy (the proprietor) said in the 6 years he has owned the pub, this was the first time. He did have it in bottles, but that is just not the same.
I had wanted to try the Rochefort Tripel again so I took the opportunity. 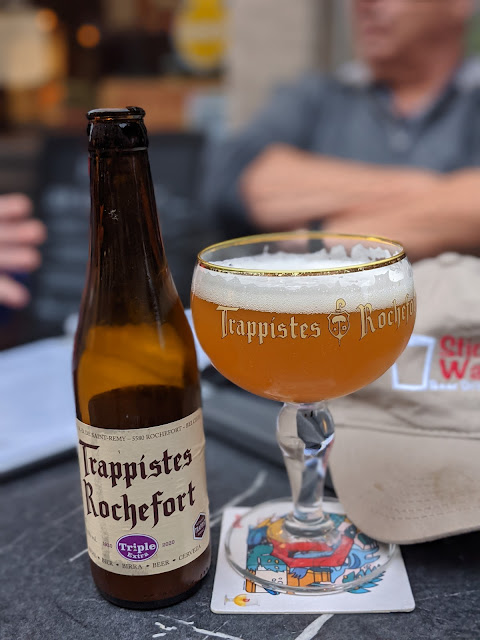 A lot of people have knocked this beer as not being a real tripel.  It is a bit out of the mainstream but I've had other beers labeled "Tripel" that were farther out there, so I am not complaining.
A bunch of the group had the English Trappist beer, Tynt Meadows. In furtherance of their education, I ordered a 750ml bottle from Tre Fontane, the Italian Trappist brewery, 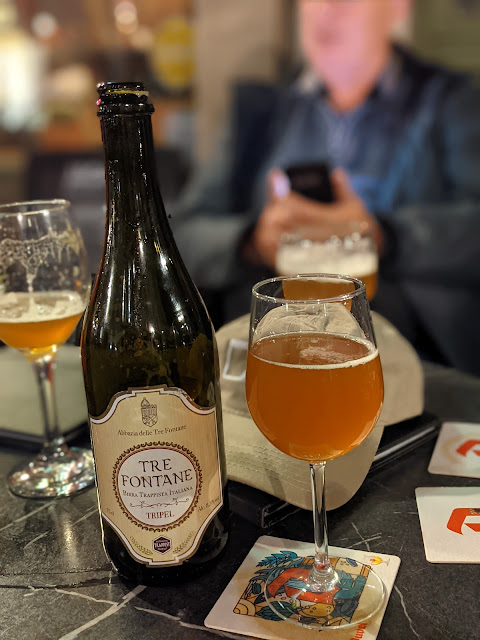 I really like this beer. It is brewed with eucalyptus but doesn't take like cough drops.
As we were walking back to the hotel, we passed the welcoming open door of De Vagrant. While mostly a genever pub, the do have a worthwhile beer list and four taps. But we decided to do a genever tasting.
We asked the bartender to choose some for us. She brought us five, roughly categorized as young, old,  grain, herbal and old herbal. We tended to like the older ones but the herbal (juniper in this case) was also good, 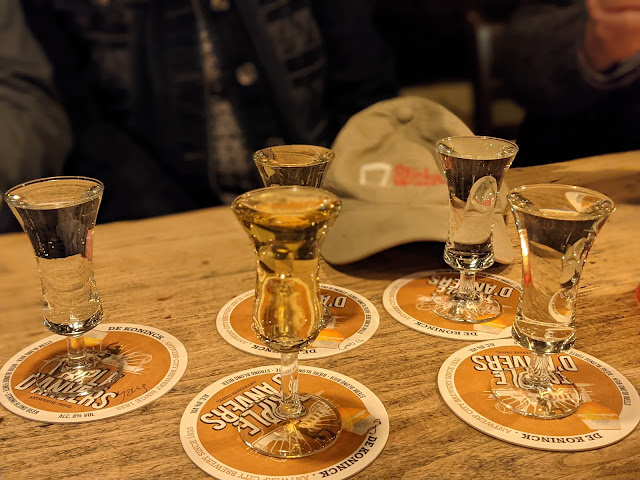 Further research was neccisary so we ordered another old and another herbal. 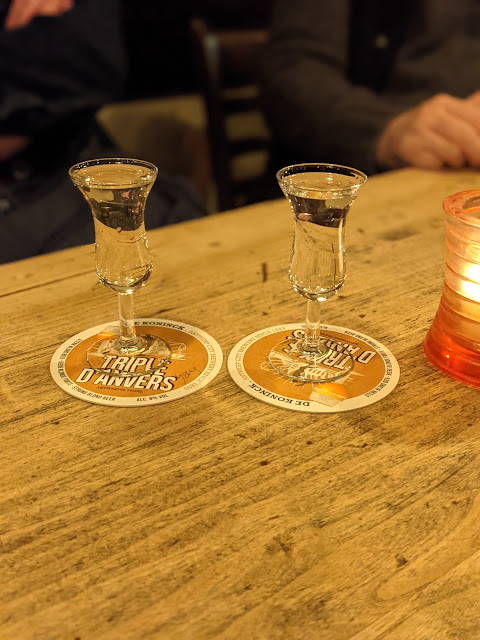 At this point it was go big or go home and since we had an early train, we went home. On the way out I learned that sadly, De Vagrant will be closing in December. The owner is retiring and he hasn't found anybody to take over the pub so the building has been sold. Very sad news.

As the only currency in Final Fantasy XIV, FFXIV Gil is too useful.