The Last Beer of the Day,,,

After leaving 21st Amendment, we decided to walk back to the hotel. We had to pass near City Beer so we stopped by for a night cap. Sadly, No -- they had just closed.

Arriving back at the hotel we noticed they had a bar. Being this is San Francisco, they had to have some decent beer for a nightcap. On draft they had Trumer Pils and Anderson Valley Boont Amber. At first I got excided about the Trumer, as I remember htis beer from trips to Salzburg. But then I remembered it is brewed under contract in Berkeley. Not that this detracts from the beer, but after drinking strong and hoppy beers all afternoon and evening it wouldn't to a Pils justice to drink it now. So I ordered the Boont Amber, a beer that is very familiar and is no danger of being judged harshly due to my condition (enebriated and suffering from pallet fatigue)t.

Because we are frugal beer geeks, we are staying at a Best Western. Our philosophy is we could stay at a fancy hotel and spend $100-200 more a night -- but do you know how much beer we could by for the difference? Anyway, because the Best Western is not know as a hangout for the trendy people, the hotel bar closes at 10:30pm. The nice bartender said she'd gladdly pour me a Boont Amber, but since we were staying in the hotel, would I mind a "go cup" -- not having heard that term since I was in NOLA in '85 I said sure. 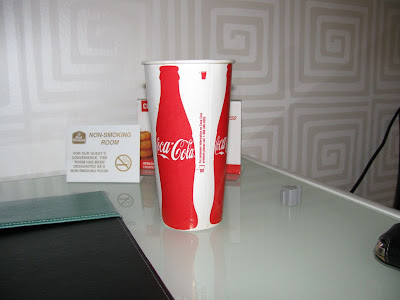 I'm going to New Orleans in May and will try to remember to bring back some proper go cups so you can be better prepared next time.