Amoung the four of us we had 28 four ounce glasses of barleywine, with an average ABV of over 10% - that is enough to feel a little tipsy. It was time for a walk and some food. So we headed down Haight to Magnolia's. But first, a shot of our table as we left... 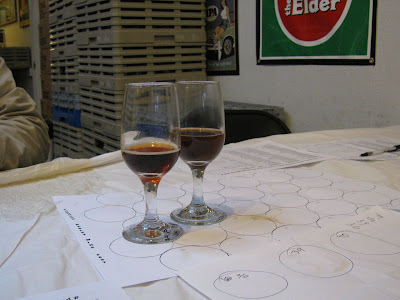 The two orphans were from St. Stans and Pizza Port. I used to be a big fan of St Stans, but I haven't seen there beer in LA for ages. I exprected better of Pizza Port -- It tasted like the beer handn't been aged long enough. Was this a last minute replacement? Enquiring minds want to know.

It was time for some food and we hadn't been to Magnolia's yet so we hopped a bus down Haight to Masonic and went to Magnolia's. The were no tables available so we put our name in and went to the bar and ordered some beers: Antwerp's Pretender, Gose to Heaven and Blue Bell Bitter. 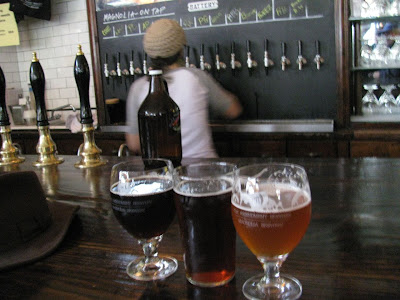 I'm not sure what the insperation for the Antwerps Pretender was, but the beer was clearly Belgian inspired. Tom had the Blue Bell Bitter and while it was well made, it had a too much dark malt in it. The Gose to Heaven was (I guess) inspired by Leipziger Gosebier but only inspired. There was a hit of corriander in there but it was not as tart as a true Gose and was way too strong (nearly 9%). But it was a delicious beer in any case.

Magnolia's always has an impressive number of beers on tap for a brewpubs. Here's the beer list, the draft handles and the cask handles... 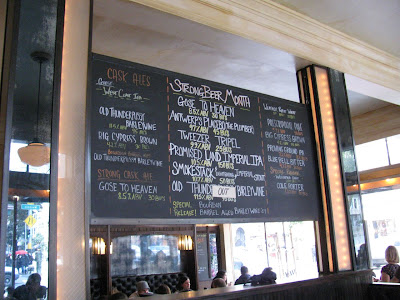 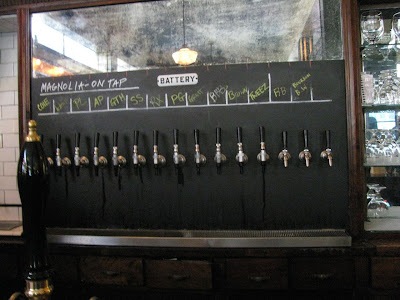 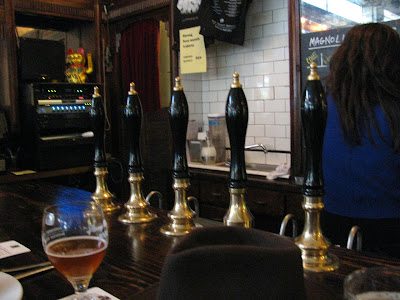 And finally a picture of our nice waitress, who kept us fed and "beered" 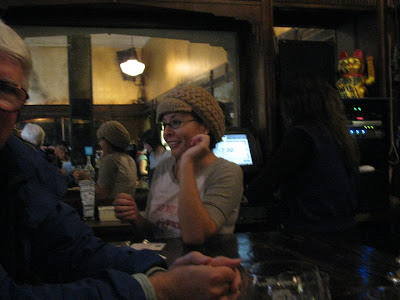