This is the Prague house tap room of the Ferdinand brewery in Benesov. The name comes from Archduke Ferdinand (of Sarajevo fame) who once lived there.

They have five beers on tap, but one was non-alcoholic so skipped it. If it had been our first beer of the day I might have tried it but well into our drinking day it would have suffered even if good.

We ran into a common problem -- there we two of us and we tried to order four beers. This has been a problem even without a language barrier, but with some hand signs and pointing we got the idea across. The four beers were a Svelty 11°, Svelty 12° ("Preminum") Tmavy 11° and a special 13° beer called Sedm Kuli whose name I'll explain in a minute.

The Svetly 11° and 12° were very similar as you'd expect. The 12°was a tad maltier (and a tad darker) but that was about it. I would guess they were hopped the same as the 11° tasted a bit hoppier and as a result, we liked it better. The Tmavy was a bit sweet in the finish, but not objectionally so, about the middle range of the ones we tasted.

The final beer was Sedm Kuli -- which translates to "Seven Bullets," which is the number of times Archduke Ferdinand was shot when he was assinated in Sarajevo. I found that to be a little macbre, sort of like the Abe Lincoln Brewhouse having a "John Wilkes Booth" Bitter or some such. But whatever the tragedy of WWI it did lead to Czech independence so they may have a different view of things.

As for the beer is was very malty but not sweet and I think is lightly spice. It had a lot of raisiny notes in the finish. It was only about 5.5% alcohol but tasted much bigger. A beer that would be better with food than drinking by itself, I think. 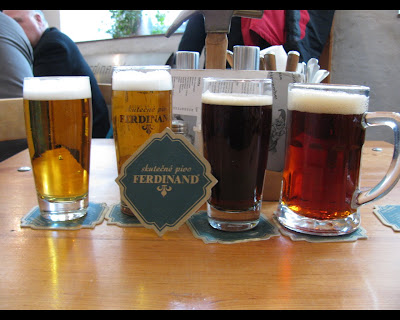 A final note about the decore -- there was a definite theme -- the coat racks were rake heads, the ashtrays small shovel heads. The light fixures where either water cans or galvanized steel buckets. The condiment tray on each table had a hammer for a handle (can be seen in the above photo). It actually worked fairly well. 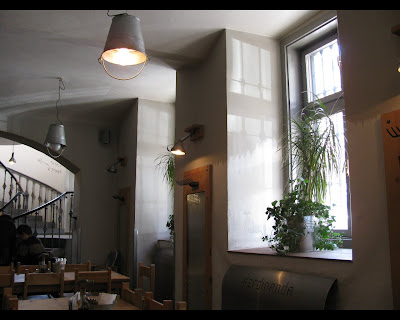 And one final warning -- brush up on your Czech grammar before using the restrooms -- one is labeled "Ferdinand-y" and the other "Ferdinand-i" -- one is a masculine ending and the other a feminine. You do have a 50% chance of being right if you just guess.
Posted by The Mad Brewer at 1:54 AM