A Tale of Two Brewpubs

We started off our day with visits to two brewpubs, Novomestsky Pivovar and Pivovarsky Dum.

Novomestsky Pivovar ("New Town Brewery") is the oldest "modern" brewpub in Prague, founded in 1993. U Fleku is of course a bit older, founded in 1499, which is why the qualifier. 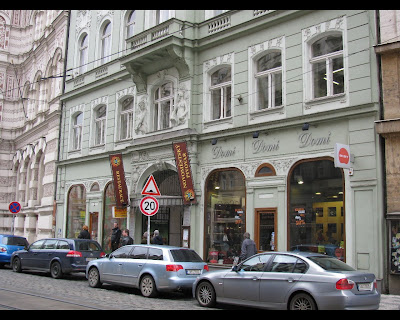 It takes up the ground floor of a large old building, so it has lots of rooms, nooks and crannies. You walk down a long hallway with shops on either side until you reach the entrance. 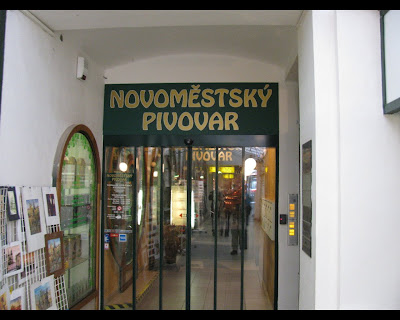 They have the traditional two beers, svetly and tmave (pale and dark). The svetly was unfiltered and very nice -- with just a enough hops to balance the almost bready sweetness of a beer not completely fermented out. The tmave I didn't like as much -- it had a funny bitterness that wasn't from hops or black malt. The beer was OK until the finish. We still emptied the glass, so it couldn't have been too bad. We had another svetly with our bowls of soup. 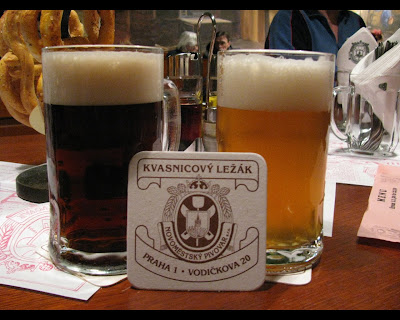 The next stop was Pivovarsky Dum, the parent of Pivorvarsky Klub where we had dinner on Sunday night. They had an amazing 9 beers on draft (one on a beer engine) and we were a bit worried until we saw they had a beer sampler. You got eight small glasses (.1 L) for about $6 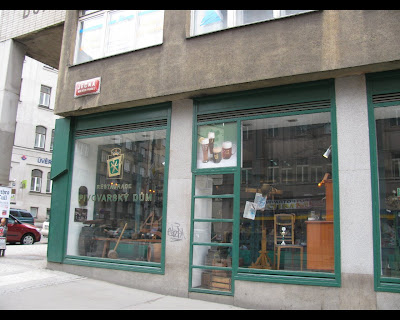 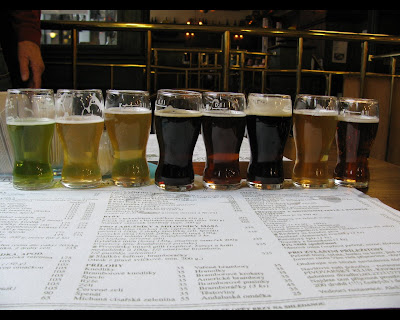 The beers, from left to right: Nettle beer (the green one), Banana, Weizen, Coffee, Sour Black Cherry, Svetly, Tmave and a seasonal beer, Maerzen (it is March, after all). I would gather the others are all regular, but I forgot to ask.

The Banana and Sour Cherry Beers had big fruit aromas and some fruit flavor but not that good. The .1 L glass was too much. The Weizen was typical, well made with not too much banana and lots of clove. The Coffee beer we had had Pivovarsky Klub -- it was really roasty but not a lot of coffee flavor came thru. Very drinkable, though. The Svelty was nice -- not as good as Novamestsky but decent. The Tmave was better than at Novamestsky -- not to sweet in the finish with enough dark malt flavor to know it was a dark beer. The Maerzen was not as malty as I like those to be, I would describe it just as a typical amber lager.

The Nettle Beer was very interesting. I liked it a lot, but is one of those beers where a pint is more than enough. I couldn't tell if there where any hops in there or only the Nettles were used for bitterness. This beer alone makes this brewery worth a stop.

The only beer not on the sampler was the stout, and in the interests of completeness, we had one. It was served from the beer engine and had a great big head. It was hoppier than the other Czech stout we had tasted. I thought it was a little light in the roasted barley department, but quite nice. 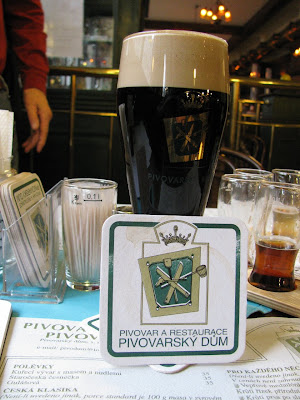 I'll finish off with a gratuitous shot of the brewery... 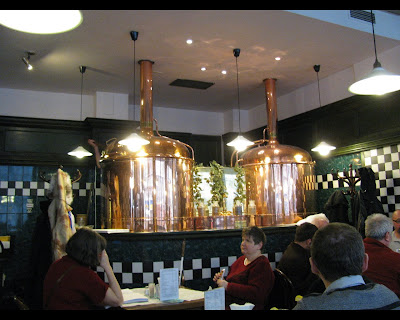