The "First Beer Tramway" I think is my favorite Prague pub. At the very end of tram line 11, it is a small building literally as part of the loop where trams turn around. The chair and benches are made from old tram benches and there is transportation memorabilia all around. They even have turned an old tram into a room. It clearly is a locals place but has some good beer as well. I don't have any pictures of the inside (other than the one below of our beers) because it just didn't seem like the kind of place where that was done. 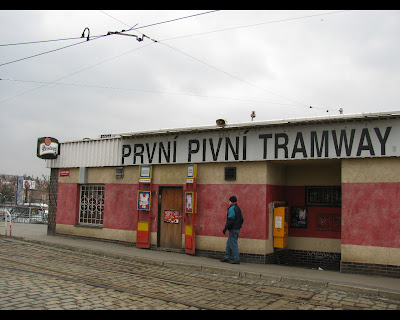 They have four taps, with three regular beers a rotating tap, the regulars are Pilsener Urquell, Primator Weizen and Pardal, a low cost "off brand" beer brewed by Budejovicky Budvar that was described by Evan Rail (author of the Good Beer Guide to Prague) as "smells like bear urine and tastes not much better." We started off with Tap 4 (as they call it) which was the Opat 12 from Pivovar Broumov near the Polish boarder, and a Pilsner Urquell. 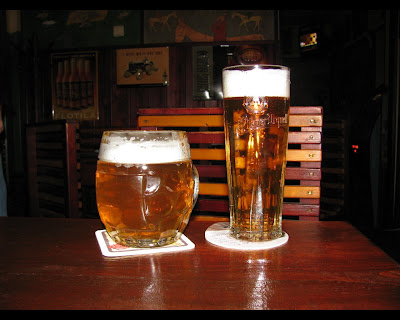 The Opat (means "Abbot" ) was very malty and slighly sweet in the finish, but in a good way. It was a beer I would definately order again. The Pilsener Urquell was very clean as you'd expect, but much thinner in the finish than I liked. Its been 19 years since I was last in Prague and my beer tastes have improved (and probably physically degraded somewhat because of age) but I remember a big malty and hoppy finish, which I haven't found here. Progress, I guess.

I had a glass of the Primator Weizen while my dad tried to order the Opat 12 but instead got another Pilsener Urquell. While we were enjoying that, some people came in with glasses of the Pardal. Luckily, what little Czech I have is not up the question "May I please smell your beer?" so I didn't ask and therefore probably avoided a fight (which I would have lost). So confirmation of bear urine aroma will have to wait. Actually, I'm not an expert on bear urine, so even if a fight didn't occur, the results would not have been conclusive. But Evan assured me he is an expert on bear urine (aroma at least) so at this point I'll just have to take his word.
Posted by The Mad Brewer at 12:32 AM

Hello! This is SO random but I was looking for a website for Taverna Patriot and stumbled upon your blog. Was the food good there? How were the prices? Also, if you need any good recommendations on places to go, my friend Velky Al (he’s a follower on my blog) knows EVERYWHERE to go. Hope you enjoy your stay in Prague!!!

We ate there last night and the food was good. As for prices, I don't have a feel but two dinners and two beers where under 600 crowns. I had a "pork sirloin" which was more expensive than the typical entre